But Ubisoft Montpellier decided to take on the first worldwide conflict in the form of Valiant Hearts: The Great War, meshing a beautiful cartoon veneer with very serious (and historically accurate) source material.

As a result, you might learn a thing or two while you’re solving a well designed pulley puzzle. 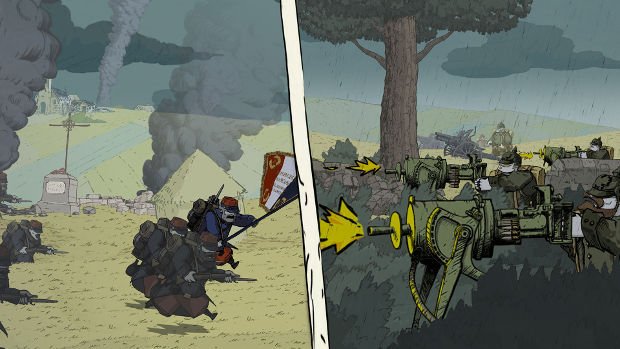 Valiant Hearts picks up right at 1914, giving us a real history lesson of how World War I was sparked. As a result of the conflict in Europe, German immigrants in France are asked to leave the country — sparking an emotional tear-jerker right in the intro, where one of the main characters has to leave his wife and child. Seconds later, the grandfather, tasked with taking care of his son’s family, is recruited into the French army. Yep, this game isn’t going to be easy to get through if you cry easily.

Notice how I said “one of the main characters” — as Valiant Hearts takes place from multiple perspectives, showing how the war impacted people from a host of different nations — not just France and Germany. While I don’t want to spoil anything, I absolutely fell in love with the narrative, as it contains a good amount of twists, turns, and connections that help form one cohesive tale. At its core, the story is about friendships and family, and it works, and from the very first in-game death you’ll start getting choked up.

So how does Valiant Hearts actually play? Well I was wondering that myself, but the game’s minimalist boot camp training session makes it abundantly clear — it’s mostly a 2D adventure game, with some occasional action-oriented moments. In some stages you might be in a non-combat area, solving crate and lever puzzles as you make your way to the next area. In combat zones, you’ll have to learn how to properly arc grenades to blow up objects that impede your path (like machine-gun placements), or take out enemy soldiers — who essentially function as puzzle elements.

While there are a few actual on-rails action bits of gameplay (like dodging incoming mortar shells while running into battle, or even a vehicular dodge session), for the most part Valiant Hearts takes the methodical route, forcing you to think before you act, lest you return to one of the game’s checkpoints upon death. Very early into the game an adorable dog will come into play, allowing you to press a button to go into greyscale mode and control the dog separately from your character.

In terms of the puzzles, I felt like they weren’t overly difficult in the slightest, but they provided a decent challenge that did make me think just enough to call it an effort. Puzzles are pretty well designed too, as the answer isn’t always in your face at all times. One of my favorite visual effects Valiant Hearts uses is a “split” viewpoint, where it shows what an enemy is doing off in the distance while you are doing your own thing in the foreground. The game does have a small hint system in place if you get stuck, but it’s used so sparingly that I never had the chance to truly consult it. Hints are also on a timer, so you can’t just spam the hint menu over and over and coast through the story.

One of the only bits I didn’t like were the boss battles, which can be finicky and feel out of place. One encounter in particular was a bit frustrating, as it had multiple 10 second mini-cutscenes in-between phase transitions, and if you suffer one death, you have to re-watch all of them. It doesn’t help that you can often die right after the cutscene is over, with no chance to move out of the way from explosives that dropped before the scene started. Thankfully though these encounters are few and far between, and the majority of the game has spot-on pacing. 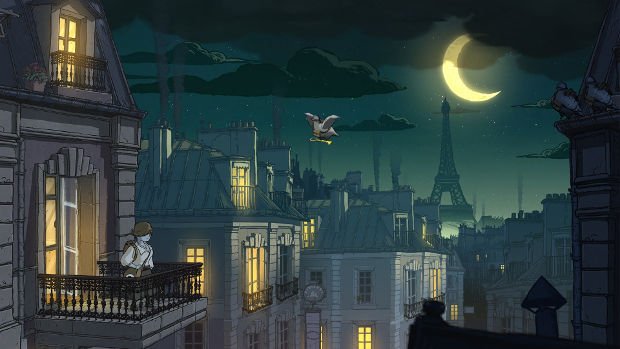 It goes without saying that Valiant Hearts is a beautiful game, which truly fits the direction that they’re going for in terms of the heavy-handed story. Clever scene transitions such as walking into training camp in plain clothes and leaving the check-in station with a uniform are frequent, and the incredible musical score (packed with both original and historical tunes) compliment the art perfectly.

The voiceovers are a combination of short-hand phrases in-game from main characters, gibberish from supporting characters, and full-on narration during cutscenes. It’s odd to have all these different styles, but they somehow come together and let the main cast really come alive. Even small exchanges like a sincere “thank you” when a story character saves someone’s life feels genuine, and it goes a long way with connecting the player to the world.

As a cherry on top, Ubisoft Montpellier weaves constant factoids into Valiant Hearts, that can be accessed at any time from the game’s menu. These encyclopedia style entries help add more context to the current situation, such as civilian form of protection against chlorine gas, or even general life in the trenches. These sections are often filled with real-life photos to really drive the point home. I tend to usually skip extras like this over in other games, but Valiant Hearts makes it impossible to not check them out. 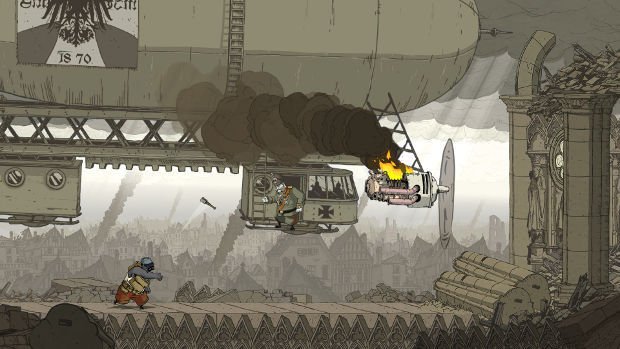 You’ll also have access to a number of diary entries from the main cast, which help piece some of the story bits together that you may not be experiencing at the current moment. Out of the game’s four chapters (which are roughly 10 hours long), you can search for extra items in every location that essentially function as collectibles — so once all is said and done and you’ve figured out every puzzle, there’s still something to hunt for.

I don’t want to give too much away, but Valiant Hearts: The Great War is significant in many ways. It not only gives us a rewarding and engaging way to see the horrors of war as it pertains to this particular likable cast of characters, but it also educates us on one of the most significant events in history. Ubisoft Montpellier could have just delivered a good game and called it a day, but they went above and beyond the call of duty to add context to the proceedings, and that is quite the commendable effort.