I had a chance to play the first few chapters of Until Dawn recently, and it ended at the worst possible moment. Whereas the first hour or so is slowly setting the table for all of the craziness that is about to ensue, when everything hits the fan, it hits hard.

Having completed the entire game at this point, I now know that while it doesn’t succeed in everything it sets out to do as an adventure experience, most fans of the genre will dig it as a campy horror game.

[There will be no major spoilers in this review, but the video may contain minor event spoilers.]

Our tale starts off a year before the main storyline with a prelude of sorts, in a cabin high up on an isolated Canadian mountaintop. A bunch of “teens” (I use that term lightly as they all look 30) have gathered for some weekend shenanigans, and of course, something goes awry, leading to the mysterious death of two sisters. A year later, the surviving members of the group decide to go back to the same location (I know, right?), bringing all sorts of emotional baggage with them.

Most of you have probably seen this type of campy setup before, but this is exactly what Until Dawn is going for. Soon enough you’ll start to see the action ratchet up a bit, as more of the mystery of the mountain is revealed, and a psycho killer shows up, creating some Saw-like situations — real sick shit. You’ll also start to learn a lot more about the characters’ motivations, and their relationships with one another, which you can (minimally) influence by way of light choices.

By “light,” I mean typical Telltale options that don’t really influence the game in any meaningful way. The main gimmick here is the “Butterfly Effect,” which will branch out your personal story, complete with a butterfly icon explosion on-screen and a handy menu option that lets you view your past choices. It can range from something significant like whether or not you want to risk your life saving a friend, or what door you took in an abandoned building. When the butterflies pop up, it’s basically Supermassive’s way of saying “this character will remember that.” Without spoiling anything, most choices don’t matter until the end of the game, where character deaths start to happen more often.

Outside of the choice mechanic that basically amounts to moving an analog stick in the desired direction, there’s lots of walking involved, coupled with QTEs for the action bits. It’s unimaginative at times, especially in the shaky intro sections, as those long roads seems to be there mostly to pad the game. After all, there’s only so many plain paths you can take in the woods before it gets boring. But after the two hours, more interesting locations start to pop up, which house interesting documents and more bits of lore for you to locate. This is where the game excels.

Despite the above issues, I was inspired to play Until Dawn from start to finish in one setting. It was interesting enough where it kept me captivated throughout, and the game is exceptionally good at world-building. While I initially didn’t care about the whole meta-narrative surrounding the mountain, I quickly changed my tune as I acquired more totem collectibles — artifacts that each unlock a few seconds of a secret video that gives you a bit more background on the events of the game. Also, all the Resident Evil style letters and notes are all done very well.

Where recent David Cage efforts fail for me is the over-emphasis on performances that end up wooden, and a terrible plot that begs to be taken seriously. Thankfully, while other elements of the game may not be all that riveting or new, Until Dawn dives in with both feet on the horror theme. Sure it’s not an excuse for some campy performances, but you really know what you’re getting here, and there’s no bait and switch involved. The script is also occasionally funny, as are the performances from the (mostly) talented cast. I have to say, it’s really weird seeing Brett Dalton as anything other than Grant Ward, but he’s mostly enjoyable to watch. 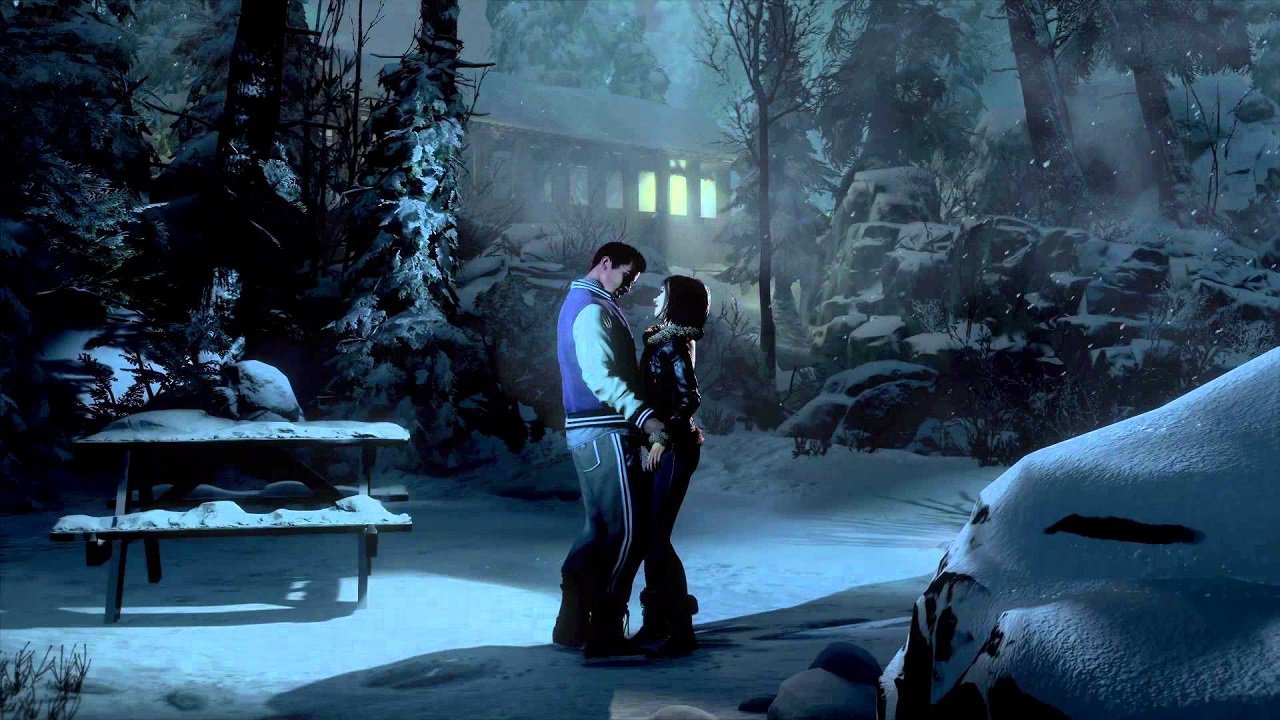 My general enjoyment of the core cast goes double for “The Analyst” sections of the game featuring the always delightful Peter Stormare. These portions are easily the best part of the experience, as a mysterious psychologist asks you series of questions (usually about your fears) in various interludes of sorts after each chapter concludes. It slowly gets darker and more twisted over time, and they really nail the tension here.

So how long is the game? My playthrough took roughly seven hours, and you’ll have the option to replay chapters individually to rectify past wrongs or try out new choices. There’s also a few extras involved in the form of little video featurettes that you can probably watch on YouTube in a week. If you aren’t keen on hunting for collectibles, you can try to change the ending into one you desire.

Until Dawn knows exactly what it is, and doesn’t pretend to be anything more. In that process it allows for some predictable plotlines, hammy acting, and lack of meaningful choices, but I’m glad that it exists, and every horror fan owes it to themselves to play it at some point — especially at a price cut.