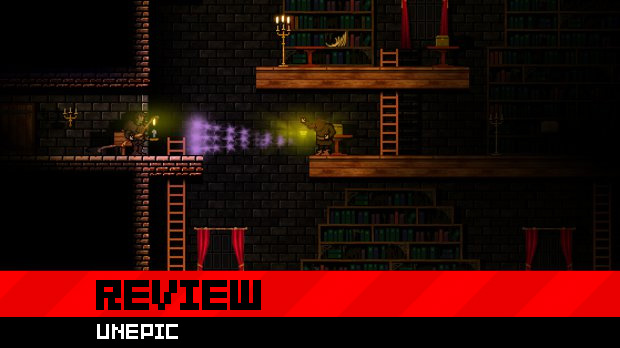 For anyone that has ever played a Castlevania game (except the newest one), or a game inspired by the franchise, there are a few things that always stick out; endless corridors filled with monsters, precise jumps and a crazy level of difficulty. Unepic, a new indie title in the genre takes some of those staples, and adds a slightly different twist to them.

The world of gaming has evolved a bit since Belmont went toe to toe with Dracula, and some alteration should be expected when playing a 2D platformer of this nature. While fans of this style of play will notice some very clear nods to the games of old, there is enough that is different about it to make Unepic a unique gaming experience. Add to that the fact that the developer pulled inspiration from multiple games and genres, including The Maze of Galious, Castlevania and World of Warcraft. While each of these titles influences this title, the story, humor and levels are uniquely Unepic. 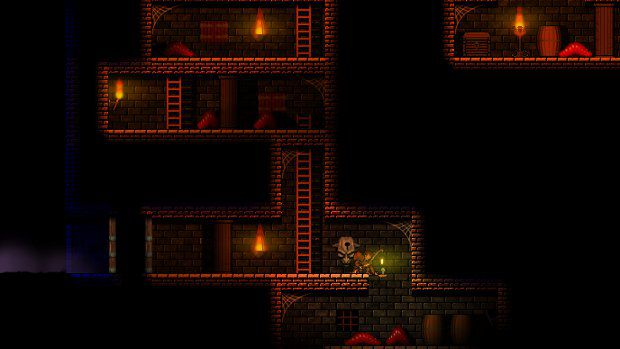 Let me start by saying this game will not hold your hand. While it isn’t as hard as some of the older titles the creator pulled from, a lot of experimentation will be needed during the adventure. Thankfully there are three difficulty settings, and while veterans of the platformer genre might find easy or even normal difficulty boring, the challenge has been scaled back for those who maybe aren’t as familiar with the rules of this type of game. And there is more customization than just how much you want to be challenged. Players are given a choice of physical or magical attacks as well as the ability to use potions.

At each level five skill points are awarded that will allow players to fine-tune their character. Points can be put into weapons, armor, constitution, potions and magic types, and the only two that are necessary are constitution and armor. Mostly. There are times when using one weapon type is better than another, and there are other times where a certain level of mastery is almost required. This can be irritating if you haven’t invested into the required skill, but usually there is more than one way to beat a monster or boss. If you don’t have the skills necessary to bring something down quickly, that just means it will take longer to defeat. Or you’ll just die a lot until you can actually kill what you’re trying to kill. 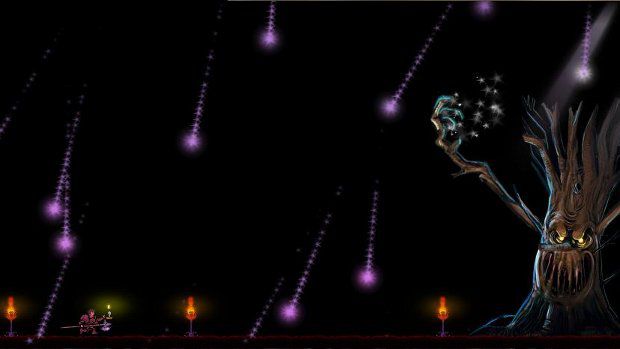 Since this is a PC game all actions are controlled by mouse and keyboard, though the mouse isn’t as needed as the keyboard. Along with the usual jumping, attacking and magic-casting that is expected in this sort of title, just about everything you can carry can be assigned a shortcut. This is especially useful with alternate weapons and armor since there are times when you’ll need to switch gear quickly. I most frequently switched between a melee weapon and a bow, which was quite a lot nicer than digging through my inventory looking for the items every time I wanted to use a different one. In addition to weapons and armor, pets, potions and spells can also be bound to keys, which will become incredibly useful later in the game.

Probably the most important thing to note is the Map (and it is important enough that I made it a proper noun) which can be used to make notes, serve as a point of reference and show you which areas you have and have not explored. You will use the Map. A lot. The castle you will be exploring is huge, with over 200 rooms and seven sections, all filled with quests, secret passages, vendors and bosses. The only way you can keep from making notes is by having great memory, and even that shouldn’t be relied upon. I used the Map to make note of just about everything, whether it be quests, entrances to boss rooms, or gates and locks to new sections of the castle. There is a good deal of exploring to be done in the course of this game, and the easiest way to go about that is by using the Map.

As I said before, there is no hand-holding here, but the developer has made travel easier. Throughout the course of the adventure many alternate courses of travel will be opened up. That isn’t to say it makes anything easier, but it does cut down on the back and forth that would be required otherwise, which is a great thing. As more areas are opened, more spells, abilities and gear are unlocked. Running back and forth through each section just to get to the vendors would be frustrating and time consuming, so teleportation scrolls and spells are provided to make life just a tiny bit less tiresome. This is also important because there are times when, unless you’ve spent hours grinding levels, the difficulty will spike and all of the monsters will become incredibly tough. In other words, you’re going to die. 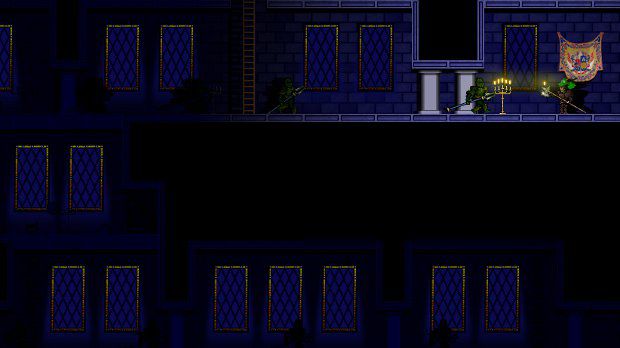 The scaling of combat, how hard monsters are in a given area, is maybe one of the most poorly executed aspects of Unepic. I would breeze through an entire area, not taking any damage, even felling the boss on my first try, and come to a screeching halt as soon as I got into the next zone as even the easiest of enemies was suddenly doing massive amounts of damage to me. Nowhere is this inconsistency more obvious than at the end of the game when the challenge level goes from mild to high. The change wouldn’t be so bad, except that no warning or hint is given that sh*t is about to get real. I went from killing with ease to painful and constant death. A less drastic change in difficulty would have been nice, but that is something that happens throughout the game, and usually without warning.

With the bosses, at least, you are not left to fumble around until you get lucky and kill them. Thanks to a strange set of circumstances, the hero, Daniel, ends up with a traveling companion that will offer hints and tips. This companion is not a huge fan of Daniel’s, and will sometimes lie, hoping to kill his travel buddy, and it is up to you to determine if the ‘help’ being offered is really going to be helpful. The relationship between Daniel and Zeratul is, at first, uncomplicated. Daniel makes fun of Zeratul, and Zeratul tries to get Daniel killed. As you progress through the game, however, the relationship between the two grows. The story, overall, follows that path, seeming bland and even boring to start, but as more of the game is beaten, more of the story unfolds. Rather than going into detail and spoiling something, I will simply say that I was pleasantly surprised to find that there is more to the story than what I originally thought.

The dialogue is good and considering that one man not only created the levels, programmed the entire thing, composed all the music and wrote the script, its damn good. I would have liked to have seen more of it too. A lot of what Daniel says comes straight out of videogames, movies and books that are popular in our culture, which is fine if you get the reference or like the same things that Daniel seems to like. Otherwise the jokes fall a bit flat. The game is also so saturated in popular gaming culture that, after a while, I stopped finding all but the best of jokes uninteresting, and it would have been nice to see a little more creative writing in there. However, while Daniel’s comments and quips can get old, Zerathul’s reactions are usually good for at least a smile, as he will ridicule the logic of other games as stupid. For example, early in the game Daniel finds a sword and remarks on killing spirits, which Zerathul calls stupid, since spirits are incorporeal, and shouldn’t be affected by normal weapons. There are also a few quests and easter eggs scattered about that are genuinely fun, none of which I will ruin for you. 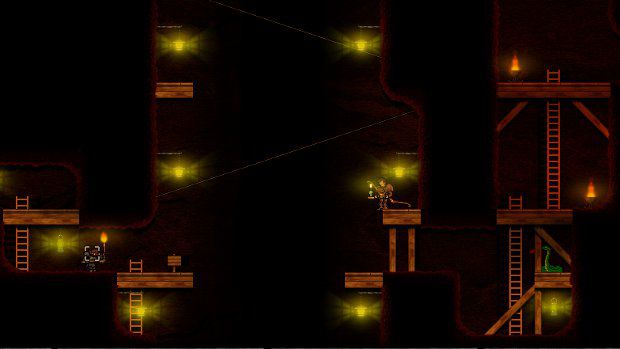 Unepic is fun, and if you are a fan of the platforming genre, it is certainly worth the little bit of money being asked, but it isn’t for everyone. It is, for fans of this style, a solid title with a few flaws that in no way ruin the game. It is also rather long for the asking price. I spent about 22 hours running around, investigating areas and killing things, and I have yet to discover every room in the castle. So if you enjoy running around in castles, jumping around platforms and figuring out the best way to slay monsters (which I’m assuming you do since you’re reading this), give the game a try.

I think it is also worth noting that the developer, Francisco, spends time reading the game forums and addressing glitches and bugs that players find, so if you run into any technical snags, you can let him know and there’s a chance he may actually fix it. Besides that he asks for suggestions and criticisms, so the more people that play and give feedback, the better his next game will be.