The competition is fierce, and I’m not just talking about the folks delivering beat downs online. With so many fighting games on the market nowadays, fans of the genre are spoiled for choice. Studios are vying for mindshare, just as we’re battling in the arena. Want people to take notice? Well then, you had better bring your ‘A’ game. And make sure to come out swinging.

That’s exactly what Melty Blood studio French Bread has done with Under Night In-Birth Exe:Late, the latest 2D fighter to throw its hat into the ring. It might look like just another high-flying “anime” fighter at first glance, but looks can be deceiving. Under Night In-Birth is its own beast, one absolutely deserving of your time and attention. 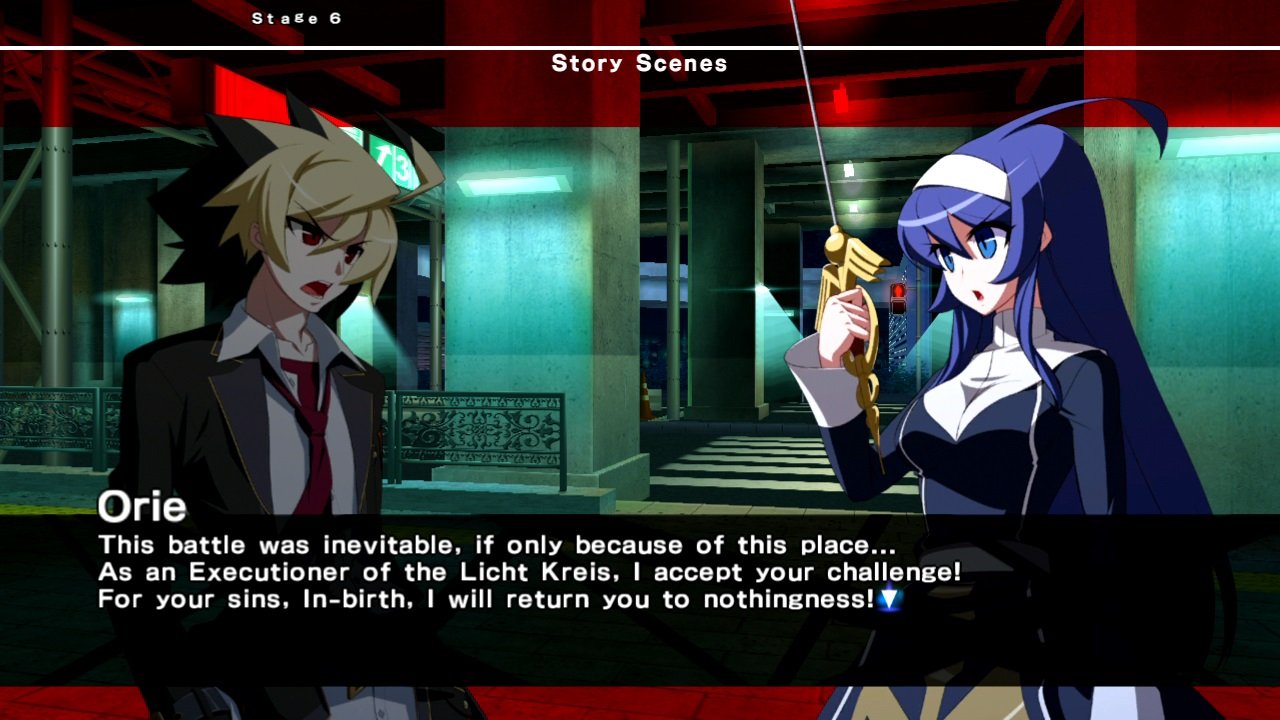 Under Night In-Birth has a story, but it certainly isn’t much of a draw. Arc System Works may have helped French Bread bring Under Night In-Birth to consoles, but don’t go in expecting a tale on the same level as other titles in Arc’s prolific catalog. A paranormal phenomenon called the Hollow Night is happening and demons are spilling from the rift. So, naturally, it’s fighting time.

And that’s really why we’re all here, isn’t it? Thankfully, the combat at play is just fantastic, as French Bread has carved out a niche for itself between the breakneck air-dashers and slower, more grounded titles like Street Fighter. It’s fast, but, with precious little in the way of aerial defense, you’ll probably want to keep planted on terra firma most of the time.

Space control is a critical element of Under Night In-Birth, as nearly every character on the roster has some sort of long-range attack to jab at opponents and keep them at bay. This creates a fascinating dichotomy at the heart of the experience, giving players the tools to zone adversaries and bait them into vulnerable positions while also heavily encouraging aggressive play. 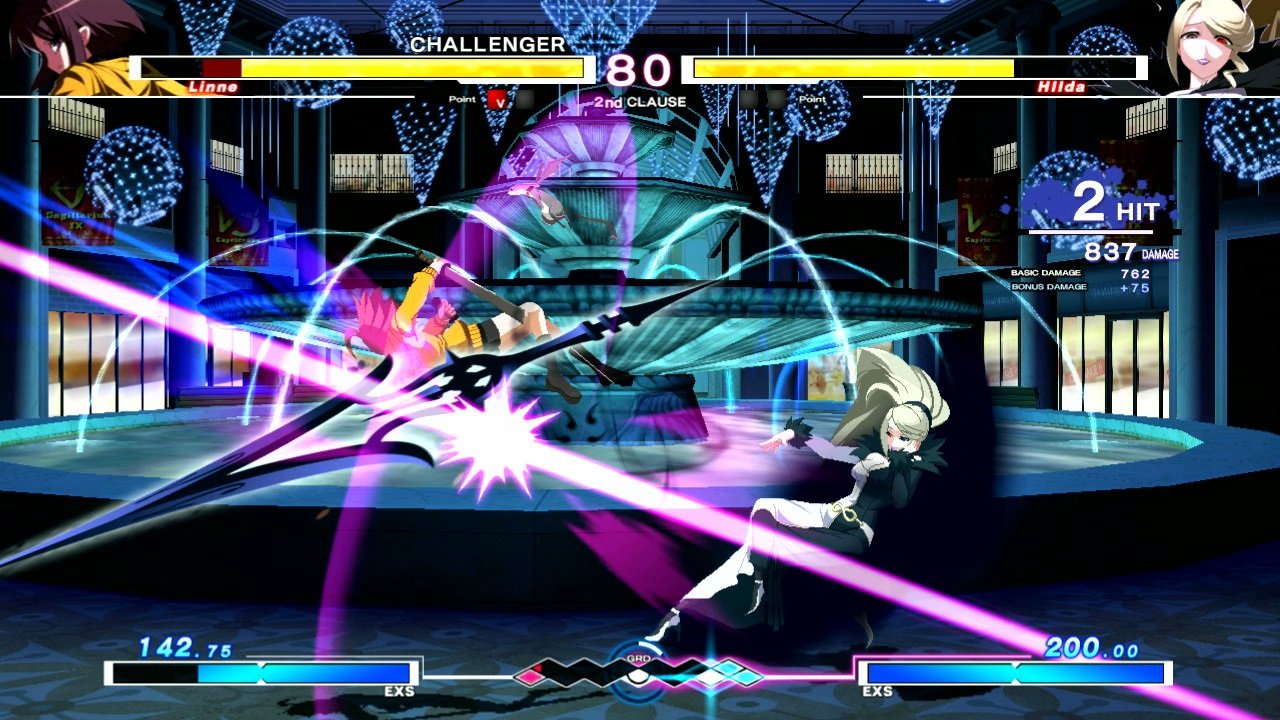 Notice that bar at the bottom of the screen between the special gauges? That’s the “GRD.” It’s a baffling thing, really. In the center of the meter there’s a ring that makes a rotation every 17 seconds. At the end of each cycle one player is awarded “Vorpal” status, granting the winner a damage bonus and the ability to “Chain Shift,” which can be used to perform special combos and momentarily pause the fight. It certainly adds a layer of strategy to the game.

One gains GRD by landing attacks, blocking them successfully, and rushing forward. It can also be charged manually, though it’s risky. This doubles as way to deplete the opponent’s reserves. GRD is lost by moving away from the enemy, backdashing, or having one’s attacks blocked.

GRD essentially punishes those clinging to predictable strategies and attack patterns, thereby incentivizing intelligent play and giving rise to all sorts of mindgames. Matches often feel like a tug-of-war, where the timing of an assault or execution of a block or pushback could be the tipping point in battle. That said, a Vorpal bonus is a fleeting advantage, not a surefire path to victory.

Melty Blood fans will be glad to see Sion make an appearance as a guest character in Under Night In-Birth, though she’s now named Eltnum. Her dialogue is brilliant too, as she frequently references the fact she shouldn’t be in this universe, breaking the fourth wall and even giving the Type-Moon franchise a plug here and there. French Bread also pays homage to its doujin roots with another guest, the title character from Subtle Style’s 2D fighter Akatsuki Blitzkampf.

All the game modes you’d expect (arcade, training, versus, time attack, survival, and score attack) make an appearance here, though the overall presentation is somewhat spartan. That’s not a knock on Under Night In-Birth‘s visuals, mind you. The art and animation here is just stellar, even if some of the character designs and background environments look pretty run-of-the-mill.

Arc System Works did a great job with the network mode, which works seamlessly across all regions. I was able to take on a number of players from Japan (as well as westerners who decided to go ahead and import the game) without experiencing any lag or disconnects. 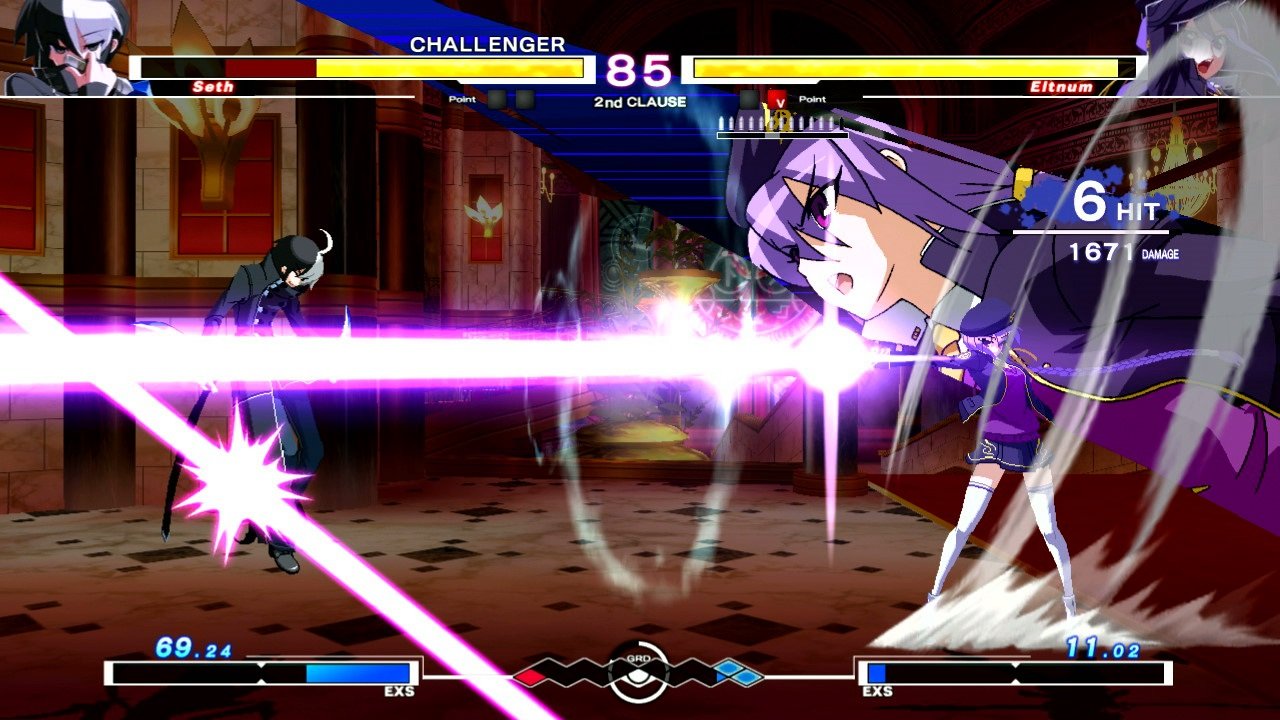 I do have concerns about the title’s longevity, though. It’s a niche game, one currently lacking a vibrant community. While finding a match wasn’t a tremendous challenge, I never noticed more than a dozen or so players in the unranked lobbies at any given time. Hopefully the impending localization can inject some new blood and give the online mode a good kick in the pants.

That’s really my one concern, how much appeal an obscure fighter on a sunsetting system will have. It’s an apprehension not levied at Under Night In-Birth itself but the circumstances surrounding it. French Bread has crafted an intelligent, tactical fighting game that I’ll surely be playing for a long time to come. I certainly hope you’ll join me.