Helicopters are complex, unwieldy machines. In games, their difficulties are either flat-out ignored (Twin Cobra) or make for one of the steepest learning curves you’ll ever face (Battlefield 2). Under Defeat is a balancing act that exists between these two extremes. It controls unlike any other shoot-em-up on consoles, but that may not be a good thing, depending on your preference.

One thing is for certain, you’ll need to earn your piloting license to fly in these very, very unfriendly skies. 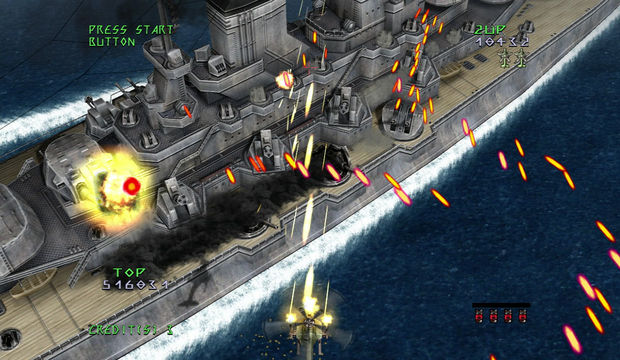 In alternate history of World War II, Under Defeat lets players control Nazi pilots who conquer the Western Allies — albeit, this US release of the game removes some of the more obvious connections to the Nazi party. Under Defeat was released onto the Dreamcast in 2006, one year into what we once called “next-gen”. And yet, neither of these things is what makes Under Defeat such an oddity in its genre. Rather, it’s Under Defeat’s obtuse controls that make it a standout title.

In its original arcade release, Under Defeat is played with a joystick and two buttons. The helicopter scroll up and down, a bit slower than in other shooters but those typically feature jets. The kicker is that going left and right changes the angle of the helicopter. You hold fire to lock into an angle, allowing you to diagonally shoot enemies from afar. This sounds simple but successfully dodging while providing fire is one hell of a challenge, even in the game’s opening stage. You could lock into a traditional forward facing position at all times, but Under Defeat encourages working the angles since that’s where enemies often come from.

Getting used to Under Defeat’s controls is both the game’s blessing and curse. Learning to control the helicopter can be exhilarating or frustrating, depending on circumstances. The original offered two control options, one where going left or right would angle you toward that direction and another option that would angle you away from that direction (allowing for quick return fire). I never felt comfortable with either but I eventually settled on angling toward the direction I’m going since A) it’s what the top scoring players on YouTube do and B) it’s called “Normal”.

The problem with this entire system is that it requires absolute control that the PlayStation 3’s thumbstick can’t provide. There is an option to increase sensitivity but none to decrease. Go figure. I became adept enough to reach the final boss on Normal difficulty, but I never became comfortable. I imagine the game feels much better with a good arcade stick. It’s as if cult favorite shmup developer G.Rev knew this because it included a new dual stick control option for this HD update. This makes moving and firing a breeze to the extent that it takes away the main appeal of the game: overcoming the unwieldy nature of the helicopter.

The dual stick controls have another major pitfall through the game’s options. Options, as in those little robots that hover around your ship and automatically fire at enemies (NOT settings). There are no upgrades in Under Defeat and the only pick-ups are options that come in three varieties: vulcan (fast, weak), bomb (slow, strong), and cannon (between the two; my favorite). Your option will only be used temporarily and you can only summon it by not firing, letting a meter fill up. There is a cooldown period after use, which is barely noticeable with the vulcan but a death trap with the bomb. 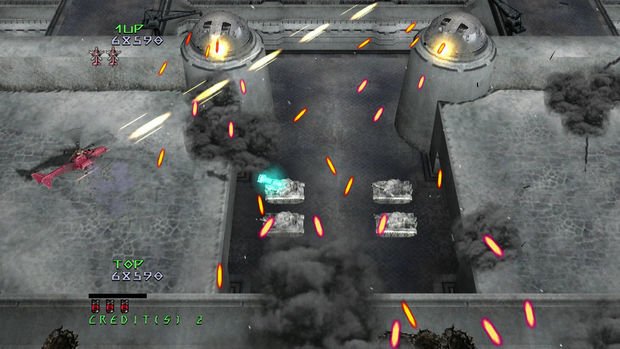 These options are pretty finicky with picking a target, so you’ll have to position them in front of an enemy. If they don’t have a target to shoot, they won’t be of much help. Flying your ship in the direction of an enemy, sending an option their way, quickly piloting across the screen, and then flanking is something you’ll do a lot in Under Defeat and it’s pretty awesome. What’s not awesome is doing this with the dual stick option, since the direction of the option isn’t dictated by the right stick (gun fire) but the left stick (movement). It’s a silly thing to overlook.

Under Defeat HD brings the Japanese cult hit to 16:9 ratio with higher polygon models and a remixed soundtrack. G. Rev did a fantastic job in not changing the feel of the game while providing more space to traverse. I wish the original score were an option in this New Order mode, but the remixes aren’t bad at all. This new coat of paint isn’t enough to prevent Under Defeat from being its same, old drab self. I know its a military shooter and all, but couldn’t have G.Rev put some more personality and color into these stages? This is a difficult game which means you’ll be seeing the same areas a lot. I grew so tired of them and I bet you will, too. 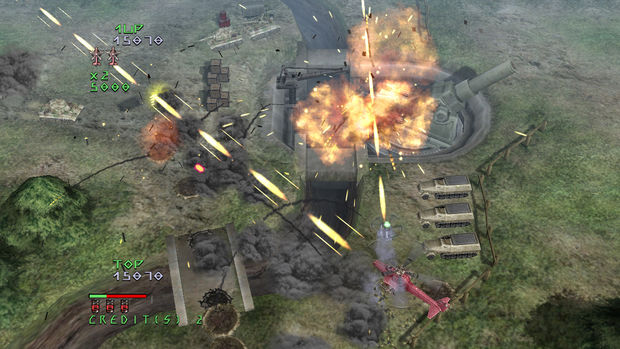 As with Akai Katana, Rising Star Games has published a quality shoot-em-up on consoles with stellar packaging. Unlike Akai Katana, Under Defeat is no instant classic and it doesn’t feel well suited for a controller. It’s also a much slower and cheaper game, full of gotcha bosses and enemy attacks that make me pine for Cave’s bullet hell — at least I can see the hurt that is coming my way. There is also the problem of gun fire blending too easily with explosions and there are always explosions in Under Defeat.

Warts and all, Under Defeat is a capable, unique shoot-em-up given new life in this HD update. Its ridiculous controls will divide players, forming a hate-love relationship with the game. Under Defeat feels like trying to rub your stomach and pat your head at the same time. It’s a fun, awkward exercise that some may grow tired of all too soon.