I don’t care if you’re a professional tarot reader: no one could have predicted an Uncharted card game.

Out of all of the Sony franchises to choose from, I guess it saw fit to create a card game based around the idea of collecting treasure, and gunning down people in a head-to-head resource management style fashion. It could have ended terribly.

But you know what? As weird as it sounds on paper, it mostly works. 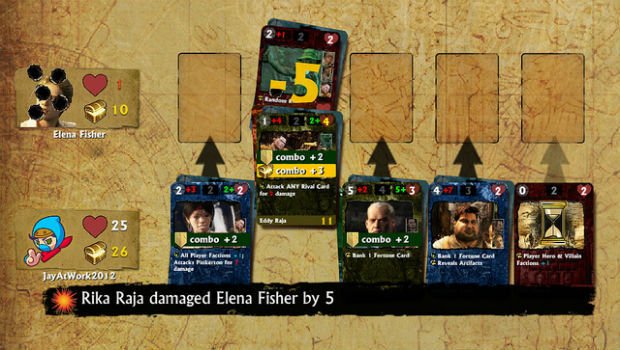 At the core of it, Fight For Fortune is a simplified resource management game with elements of Magic the Gathering. What that basically means is you’re choosing to play certain cards in various hands (drawn from a deck randomly) in order to achieve the most desirable outcome, and deplete your opponent’s life tokens (or adhere to some other goal). Whether this is by way of a slow draw, or a series of quick attacks, it’s up to you and how you order and organize your deck.

For instance, when choosing which cards to play in a round, you have to weigh each individual character card before setting it down, and decide whether or not to play them based on their attack rating, defense rating, special ability, or a combination of the three.

Once you understand the premise, the way the game works is fairly simple, even if the tutorial takes fifteen minutes or so to explain it. Each player turn has four phases: laying down characters (faction cards), choosing a treasure (fortune cards), playing action cards (resources), and the attack phase.

Players draw their faction, fortune, and resource pool randomly at the start of the game, and you are stuck with that hand for each type of card (barring resource cards, where you can use or trash one per turn).

Again, it sounds complicated, but it’s really not. Once you play your third game or so you’ll find out the strengths and weaknesses of playing a certain way, and acclimate yourself to a certain overall strategy as you start to learn how to adapt to changes. Advanced strategies involve setting down trap cards for enemy faction cards that aren’t even down yet, using certain faction cards to buff other characters, and so on. 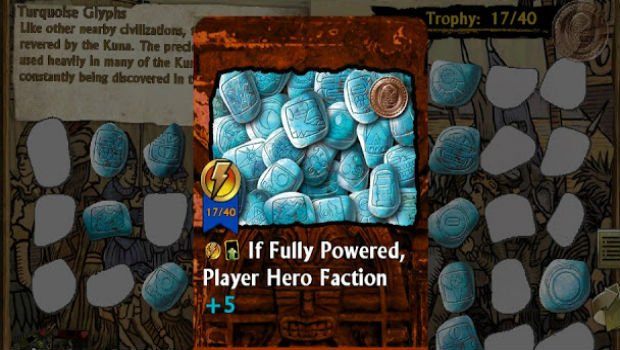 While the core game is pretty solid, there are a few major issues. For one, the UI leaves a lot to be desired, and building your deck is a nightmare. Not only is the interface really clunky (if you have lots of cards it takes ages to scroll), but there are also load times that constantly spring up in the deck menus. Sadly, there were a number of times I opted not to tweak my deck because of how slow the menus are.

Another odd issue is the fact that menus have full button and d-pad support, but the actual playable portion does not. While the touch controls work fairly well in-game, it would have been nice to simply select and play my cards with buttons from time to time, as it would have been fairly easy to implement (enable the direction pad to switch between cards, and the face buttons for confirmation/cancellation, and call it a day).

Also, there are no crazy tricks here — you’re not getting special action-adventure minigames in-between matches or even a unique story.  Depending on your love for card games, you may not be inspired to keep playing it, as what you see is pretty much what you get.

There are 18 single player levels, online play, and single sessions, but all of them are pretty much the same experience. You can beat each single player level up to five times to earn a new card or reward each time, but most people probably aren’t going to want to just farm the easier levels.

If you really like the game, you’ll get to unlock all of the card backings and table backgrounds, but since the game doesn’t really tell you how to unlock them, most people will probably ignore it (you get them by beating the campaign over and over).

There’s also another little cross-game bonus: playing Uncharted: Golden Abyss on your Vita also helps boost some your cards quite a bit, if you’ve unlocked certain achievements or found certain treasures. I happen to have Golden Abyss, but haven’t gone out of my way to get everything. With only a minor boost, I didn’t really feel inadequate, but with all of the boosts, I have a feeling I may have felt overpowered. 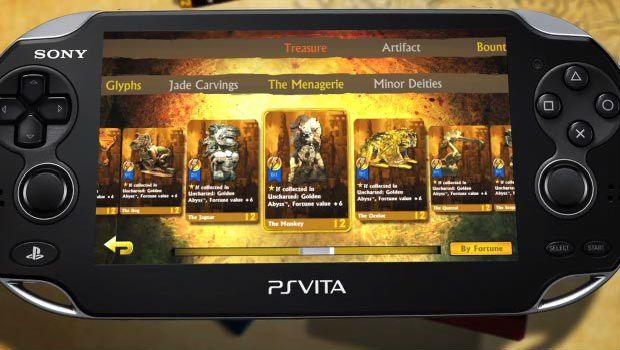 In that same vein, just know that if you play online, you may find people who have a platinum trophy, and will use that to their advantage. I’m actually curious to see if the community will eventually be weeded out in favor of the people who have said trophies. If this gets to be a real problem, I hope Sony patches the bonuses out in order to save the game.

Despite these issues, I enjoyed my playthrough of Fight for Fortune, and I was compelled to keep playing it. It lends itself really well to the Vita’s standby function, as I was able to play a few rounds here and there, set the portable to an idle state, and easily come back. Then again, I meet with tabletop and card group once a week, and resource management games are one of our go-to staples; so I knew what I was getting into.

Take heed in this caveat, as Uncharted: Fight for Fortune is a card game that happens to feature Uncharted — not the other way around. Nathan Drake isn’t going to leap out of his card and crack wise, and Sully isn’t going to beat up the other player for you with a QTE.

In order to enjoy this game, you have to be more than just an Uncharted fan: you have to have an affinity towards card games, plain and simple. If you do, you should enjoy Fight for Fortune.