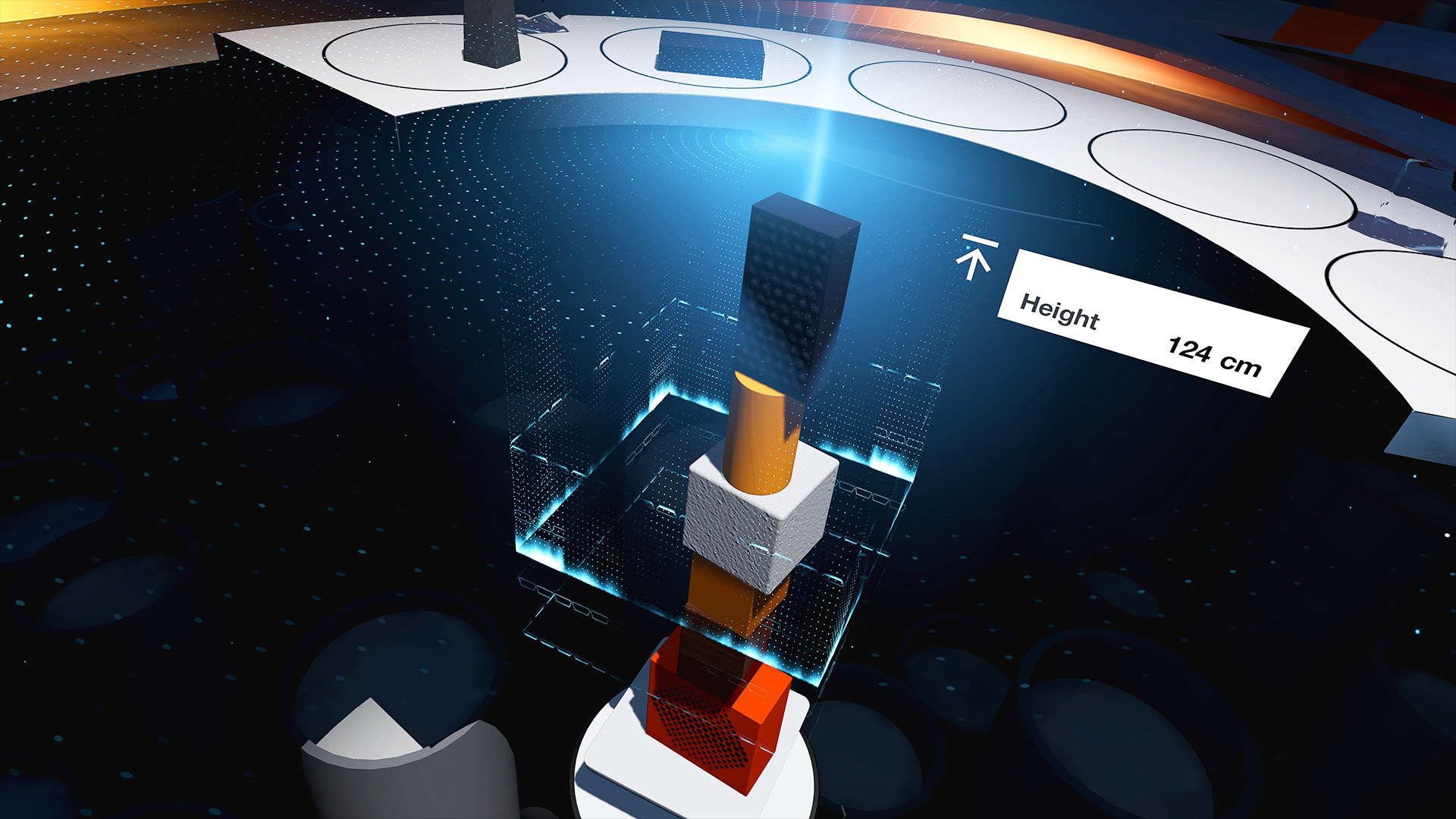 Another brick in the wall

Calmly building a tower of blocks doesn’t make for a thrilling virtual reality concept, but Tumble VR, an expansion of Supermassive’s PlayStation 3 puzzler reworked for PS4 with VR in mind, has already found a place in my library. Sometimes, you just need to wind down with a low-key experience after sweating it out in a spider-filled horrorscape or zipping around in mech-on-mech combat.

It’s just a shame a droning AI companion had to tag along. 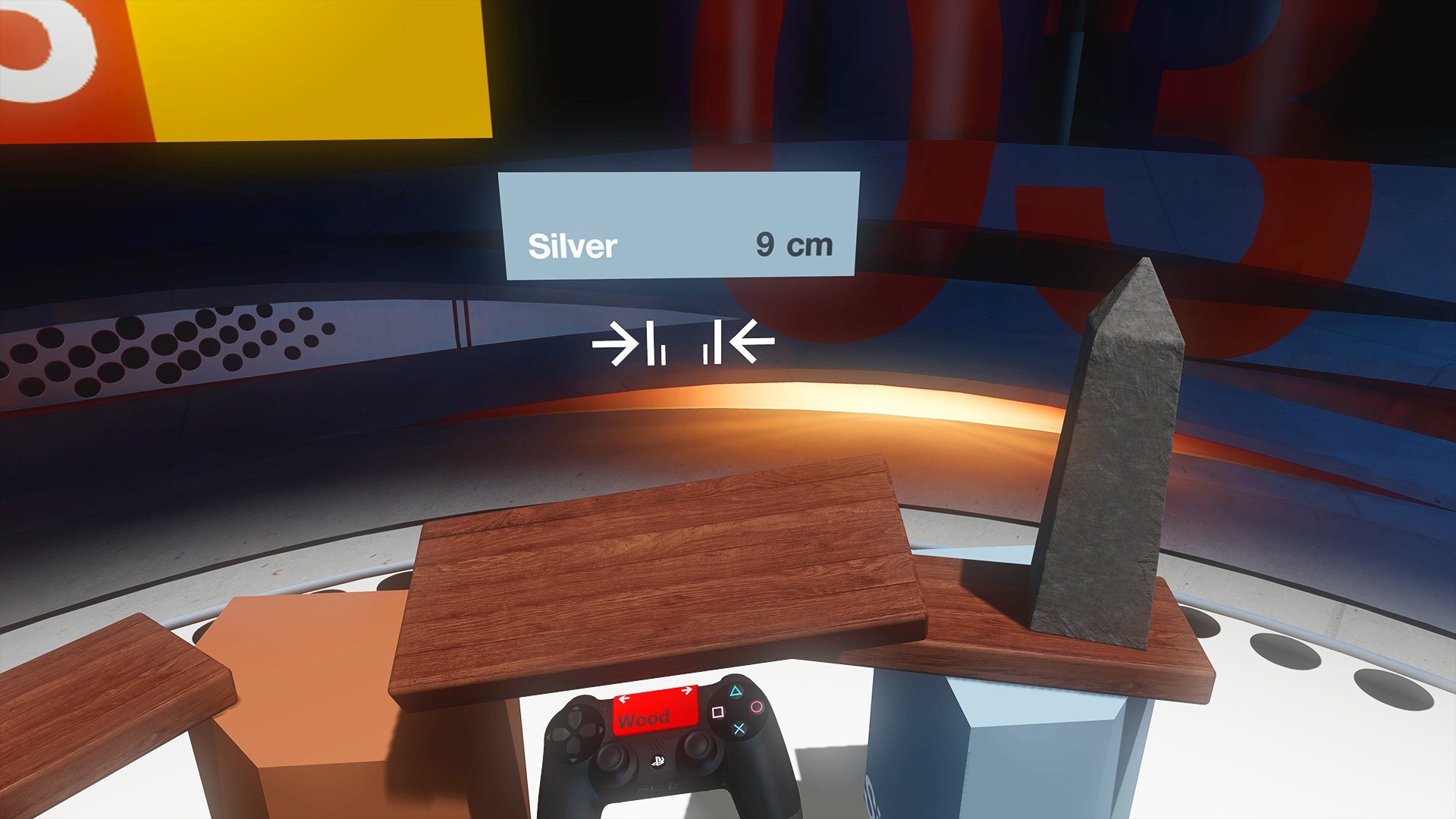 Tumble VR isn’t merely stacking blocks for its entirety, but that beginner mission type is perhaps my favorite. There’s a satisfying simplicity to it. You’ll pick up eclectic pieces, figure out where they best fit given their weight and material properties (e.g., some are lightweight, others are grippy), and go from there until you either secure a medal for the level or have your creation come crashing down.

Early on, it’s a breeze. But it isn’t long before hazards are introduced, whether it’s a “limbo” bar that hovers back and forth, requiring you to safely nestle objects underneath, or a continuously firing cannon that makes quick work of straight-vertical stacks. Besides playing for typical bronze, silver, and gold medals, there are sometimes optional bonuses related to using hidden blocks in the environment (gotta make the most of that VR immersion by peeking around!) and winning within a time limit.

Some of the other game types feel more traditionally puzzle-like. In certain levels, you’ll adjust angled mirrors to bounce a laser beam into color-coded blocks, or strategically place mines on a tower to make it collapse in the most destructive way possible. There are also bridge-building levels that stretch the definition of what reasonably constitutes a “bridge.” Those ones can be devious as hell but are good fun to figure out. All told, Tumble VR does an adequate job of trading off between these concepts and, praise be, doesn’t require you to master everything to move onto the next batch of levels.

There’s controller support for PlayStation Move and your standard-issue DualShock 4. Both work well enough, but neither is flawless. It’s organic to hold and place objects with the Move, but rotating them necessitates a flicking motion, whereas the gamepad simply and precisely lets you use the analog stick instead. That said, given how the PlayStation Camera tracks the light beaming out of these devices, the DualShock 4 seems prone to falling “out of sight,” so to speak, making it feel more restrictive.

These are minor annoyances, though. Especially compared to the narrator, a floating robot who doesn’t know when to keep quiet. His jokes and attempts at helpfulness grate very early on, to the point where I decided I’d be better off with the audio muted. I ultimately relented, because without music (the in-game audio option is all or nothing), Tumble VR feels even more dry than it normally does — and this isn’t exactly gripping, edge-of-your-seat stuff. Virtual reality can only do so much for this clinical setting.

In fact, that’s my biggest issue with the game: it is, at best, just fine. There isn’t a slick presentation or wildly compelling puzzle designs to pick up the slack and keep you hooked. I can appreciate that Supermassive has figured out the fundamentals with Tumble VR and come in at such a budget-friendly price, but I also can’t deny the times when I grew bored of playing. Don’t rush through this one.