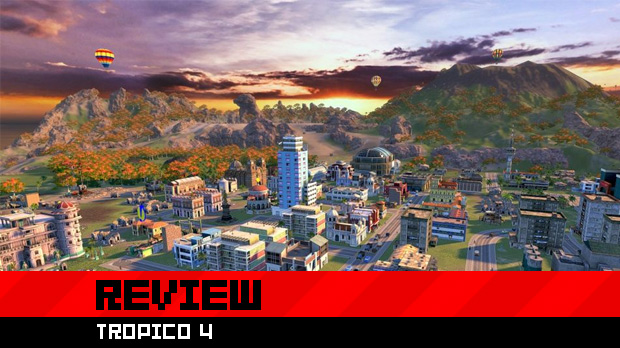 Hola El Presidente! I see you have returned to rule Tropico once more, after having done so in Tropico 3 and maybe even after extending your rule in Tropico 3: Absolute Power. Because life as El Presidente is hard enough, you will be happy to know that the island nation will take more or less the exact same skills to govern as it did before.

Or perhaps the similarity will disappoint you. 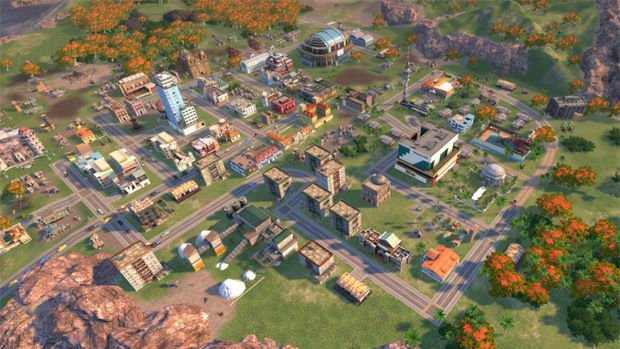 The Tropico series has carved itself a nice little niche in the city building genre dominated by different iterations of The Settlers and Anno games in recent years. Whereas the latter series focused on creating intricate economies riddled with multiple processing buildings, Tropico has always been more about managing a “light” economy and the socio-political factors required to keep everything running.

Tropico 3 refined the first game’s core and took it to the current age, even adding an Xbox 360 version that actually controlled remarkably well. The PC-only expansion Absolute Power added a bunch of buildings, and now Tropico 4 takes all of that and puts it in the wrapper of a brand new game. As a result, veterans may feel it plays like yet another expansion with key changes here and there. Which is not necessarily a bad thing. 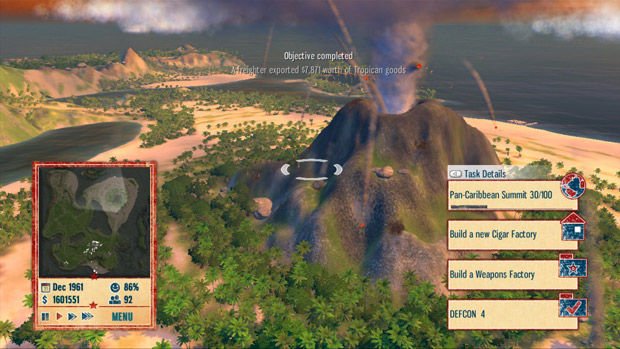 For those new to Tropico, you star as a Caribbean dictator who can choose to create his own banana republic, a lavish tourist resort, or a vast industrial empire on different island maps — or all of the above provided the map is large enough. Mines have to be built on top of resource locations, farms belong in areas where different crops benefit from natural conditions, and tourist buildings need to be in beautiful locations to yield the highest profit. Aside from a few natural restrictions, how you actually build and lay out your island city-state is entirely up to you.

Your Tropicans will need to stay happy enough to keep them from starting an uprising or a military coup, however, so building up your economy is often secondary to creating a proper functional society. The inhabitants’ needs are grouped by the factions they belong to, who now give you more feedback on what they actually want than in the previous title.

Quality housing, farms, and healthcare keeps the Communists happy, while Capitalists want a good industry and large class differences. Failing to provide enough churches and cathedrals will annoy the religious faction, having an open immigration policy to boost your workforce annoys the Nationalists, and so on. 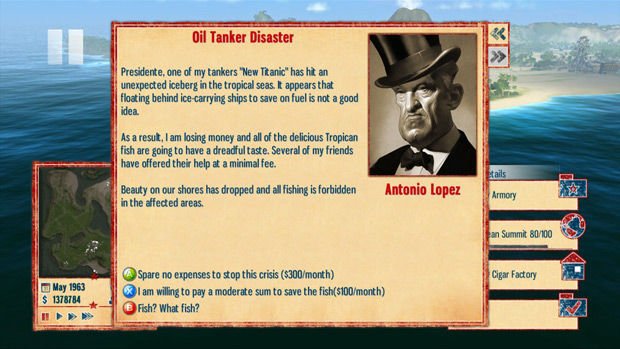 In Tropico 4, each faction representative now has its own caricature face to help you better identify with them and it’s a bit easier to see what each faction wants or what is causing them to be discontented, due to a rearranged almanac that displays all necessary information.

Tsunamis, oil spills, and volcano eruptions have been added to the disaster roster, and damage from natural disasters can now be mitigated by building and upgrading a weather station. Plenty of campaign missions will make you deal with these disasters and they make for a nice challenge and a change of pace. Despite being set in the Cold War era, you’ll even get some missions that joke about contemporary events such as a volcano eruption’s ash cloud disrupting air traffic. At its core, the Tropico brand of humor and charm is still ever-present in Tropico 4.

Other changes are more minute. Hotels now have an entrance to fit onto a road, so you can’t bundle them all together anymore. All tourism buildings now works slightly different, in fact. More attractions and luxury attractions like a luxury liner or a rollercoaster will keep the tourists entertained, but income from hotels — and especially beach villas — is now a lot less reliable than in Tropico 3. You can no longer just build 20 beach villas and never worry about money ever again.

A new building, the Ministry, requires you to hire or appoint members to a cabinet. This doesn’t actually do much other than adding more prerequisites for your presidential edicts, although your ministers will sometimes screw up and cause a negative effect if you don’t fire them immediately, or they might provide you with unsuspected bonuses.

If Juanito, the infamous and annoying radio DJ from Tropico 3, was causing you minor strokes you’ll be glad to hear he is entirely absent here. There is an achievement for killing any Tropican named Juanito, so feel free to kill all of them and claim your sweet revenge. 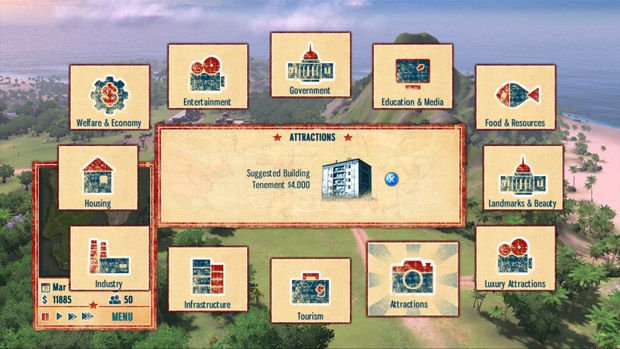 Because most new buildings simply serve as a slightly different or slightly more powerful version of existing buildings, veterans of Tropico 3 will find that very little has been changed in the core formula. If your old strategy for an early game economy worked in the past, it will most likely work in Tropico 4 as well. You’ll still stick with tenements, farms and mines at first, and gradually work your way to a high school for churches and industry. Once your economy is built up, you’ll have little trouble winning any scenario just like in the previous game.

The new 20-mission campaign does have a lot more to offer than before. Instead of semi-randomly going through a bunch of unrelated missions, there is now a somewhat consistent storyline that takes you from the ’50s to the end of the Cold War. The U.S. and USSR still play a large role in managing foreign relations and staving off invasion, but the EU, Middle East, and China now play minor roles as well. Each foreign faction will be influenced by the type of goods you export, and they offer plentiful optional objectives to improve relations and earn some more cash in the short or long run — occasionally forcing you to choose between antagonizing one of them for a benefit.

The trademark humor and tongue-in-cheek missions are back in force, and they are better than ever. Whether you have to prototype the USSR’s version of Perestroika by building a stock exchange or need to appease a group of killer mimes until they can fly to Las Vegas for a tour, each mission offers enough variety to keep you from remembering you are basically only adding minor variations to your perfected planning system from island to island.

Sidequests can pop up on the map to keep yourself occupied, which helps a great deal in keeping the repetition at bay. Whether you have to increase exports of a specific good for a specific foreign power, or are asked to institute same-sex marriage to improve relations with the intellectuals — at the cost of your relationship with the religious faction — there are very little instances where you have nothing to do. 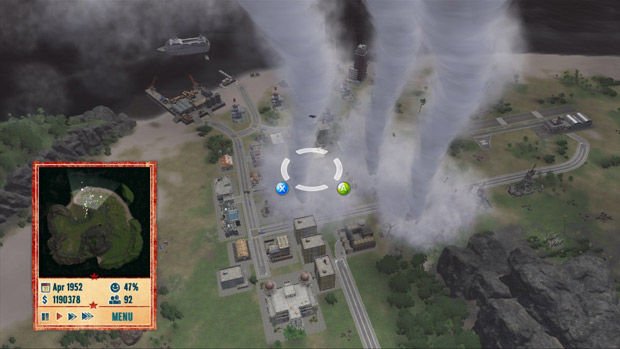 On the PC version at least, you’ll have access to as many user created challenges as people are willing to make. When creating your own challenge you still need to start with one of ten pre-created maps, but you can edit them in terms of landscape or resources to your heart’s content. It’s a shame these maps still don’t tell you anything about their layout when you select them, though. Another annoyance is that you have to alt-tab out of the game to actually enter a mission description — probably the main reason why practically none of the user-created challenges have any description whatsoever.

Creating your perfect custom template to build the island of your dreams will probably take you upwards of an hour (if not more), but the sandbox and challenge offerings extend the gameplay well beyond the campaign’s missions — which will easily take you more than 20 hours to start with.

Tropico is and remains the type of game that is infinitely replayable as long as you are willing to play it. Those players who focus on the most efficient economy may stick with their working strategies from games past, never even touching a third of the buildings you can build or the mechanics on offer. But whatever kind of island nation you want to build in your image, Tropico 4 offers enough tools to do so in great detail. 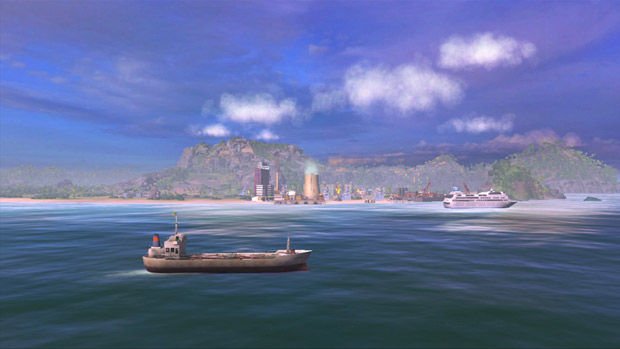 Tropico 4 is without a doubt a better game than Tropico 3 — which was easily one of my favorite games of 2009. Having said that, Haemimont has taken a conservative approach with this full-fledged sequel. While some parts like the expanded foreign relations, sidequest system, and slight UI overhaul are worthy of a sequel, the core gameplay feels practically identical to Tropico 3; if you never build shanties or mansions before, you’re not going to build them now.

Whether this sequel is worth your money comes down to a few simple questions. Did you like Tropico 3? Then you’ll like Tropico 4 just as much and you’ll appreciate the small changes, as long as you don’t expect a revolution in design compared to the previous game. If you are not in a hurry, it’s a no-brainer to pick up during a Steam sale. Have you never played a Tropico game before? Then Tropico 4 is the one to get, and once you understand what you’re supposed to do you’ll likely have a blast with it.

Regardless of whether or not you desire innovation in Tropico 4, it remains one of the most enjoyable and charming city building games of current times. Best of all, it’s one of the few games that you can just as easily play lazily from your couch with a controller as you can play it hunched over your keyboard. It would’ve been nice if there had been more to Tropico 4 than just “more of the same,” but criticisms of little actual change aside it’s still one of the most relaxing of its kind you’re likely to play all year.

I only hope Haemimont will eventually overhaul the now aging core gameplay to make it worth using all of the options at hand, rather than letting players stick with what worked before. Most of all, we really need a revamp of Tropico 2: Pirate Cove, because everything is better with pirates.