After Haemimont rejuvenated the Tropico series with Tropico 3 and its Absolute Power expansion, Tropico 4 ended up being another great city builder, if not a huge leap forward for the series. While the changes to gameplay and UI streamlining were welcome, it didn’t feel like you were playing a completely new game in last year’s sequel.

Now, El Presidente strikes back at his critics as (s)he future-proofs the island nations in Tropico 4: Modern Times. 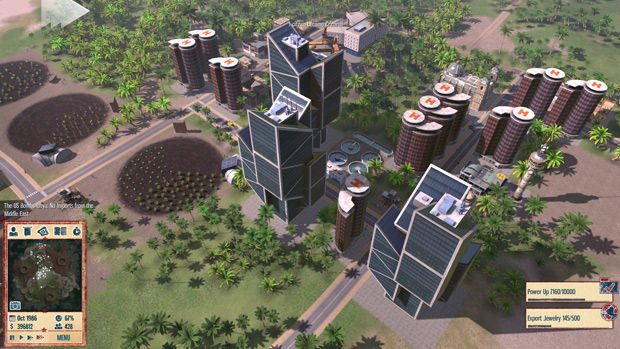 El Presidente has taken a well-deserved vacation after all the work done in Tropico 4, leaving Penultimo in charge of things. As expected, he has made a huge mess and what’s worse, a new shadow organization called The Conclave is intent on heating up the Cold War for their evil plans.

Modern Times is a full-fledged expansion with 12 new campaign missions and a whole bunch of new edicts and buildings, all reflecting a more modern era of Tropican development. While some of the new buildings are simply bigger and better versions of their old incarnations, quite a few new additions make Tropico 4 a far more enjoyable game — even forcing you to rethink your core strategies. 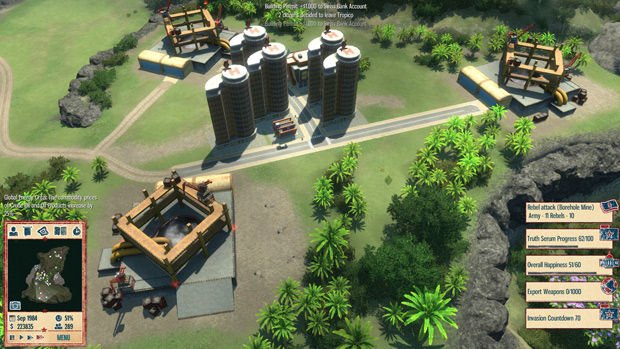 Among the most important additions is the new Metro Station, which only takes up a small area of space and which lets Tropicans move almost instantly between Metro Stations anywhere on the map. You still need to place a few garages for teamsters and the like, but the underground transit system finally allows you to get rid of the gridlocks that used to pester you as you built up your island. These Metro Stations become increasingly more expensive, but it’s a small price to pay for finally being able to stamp a new zone of buildings out of the ground in a remote area, without having to account for transit time.

The trusty apartment blocks are replaced by high-rise apartments with twice the housing capacity, at a higher cost of cash and electricity, essentially turning them into more expensive and better quality tenements. Although creating a reliable power supply used to be an expensive endeavor, not in the least because of the requirement of college graduates to maintain the already expensive power stations, it is far easier to manage this time around. Wind turbines do the trick in earlier missions, but as time progresses, a solar plant becomes available which doesn’t require any workers, and which is easily upgraded for extra juice.

The old farms are quickly replaced by bio farms; larger farms which produce a huge amount of crops inside their building area. These new farms can be set to produce corn, food crops (papaya, banana, etc.) or cash crops (tobacco, sugar, etc.), and if set on the latter two modes, they produce multiple crops at the same time. Likewise, ranches are replaced by organic variants that produce smoked beef and extra food, and mines soon become borehole mines which can produce minerals even if a deposit is depleted. 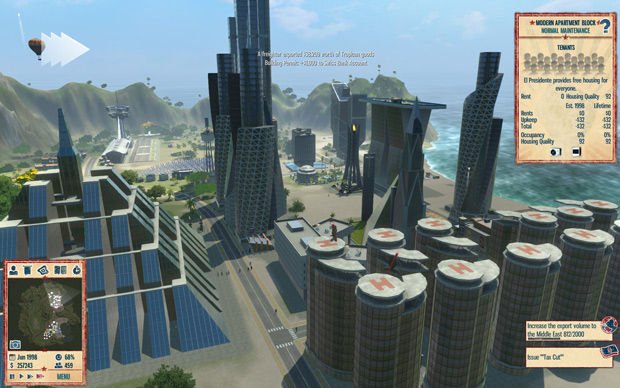 Other than the modernized and slightly more efficient versions of existing buildings, some construction options are entirely new and work well in conjunction with your tried-and-tested economy. Business centers produce revenue based on housing or media buildings in the area, and a Telecom HQ can cover a huge aura to improve the quality of life through customer support. A few other expensive skyscraper projects provide work, housing, and hotel space to a large amount of people, even though by the time you can afford these buildings, the income they generate is completely unnecessary.

Meanwhile, new edicts like the Internet Police, Healthcare Reform, and China Development Aid — which gives you 100 extra immigrants — poke fun at contemporary developments, while the Ban Social Networks edict increases productivity while disabling the ability to post Tweets or Facebook posts from within the game. The edicts are a bit of a luxury option rather than a core aspect of surviving through early years crises, but the total package of edicts and buildings adds enough to the Tropico formula to make it a fresh experience once more — even if you’ve already spent well over a hundred hours on the past few titles.

There are enough new toys at your disposal to experiment with novel city layouts, and even though some of the new buildings can produce a ridiculous amount of money, the new additions allow for that extra amount of freedom to create your perfect little island paradise. By the time you reach the 2000s, it can be enormously pleasing to look at an actual skyline as a testament to your labors. Another useful addition is the Timeline, which shows you when certain buildings will unlock, and when global events such as the Panama Canal Treaty will affect island life. 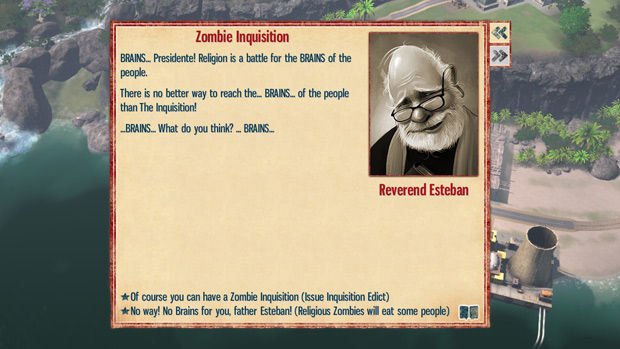 The Modern Times campaign does an admirable job at introducing most of the new buildings and edicts, while the trademark humor is even more effective thanks to some nods to contemporary (Internet) culture. Among the mission highlights are a zombie outbreak (complete with zombie inquisition), becoming part of the War on Terror, and combating an evil plot to release a free game in Tropico by creating your own game — Angry Toucans.

Even if the mission structures are merely a set of goals you can achieve regardless of your favorite style of economic development, they add enough fun to turn the act of starting from scratch — time and time again — into an enjoyable and addictive pastime. It’s easy to spend an hour or two completing a single mission on the fastest speed (which still isn’t that fast), and quick-building a bunch of expensive and fancy looking buildings at the end of a mission can make you go mad with power.

It is a bit disappointing to see certain new island maps recycled during the campaign, however. In the cases where it happens, you will at least have a different set of goals and a different starting position, but Tropico is a type of game where if you’ve found one good solution to the early economic build-up, doing the same thing again on the same map with largely the same resources is not quite as fun the second time around. 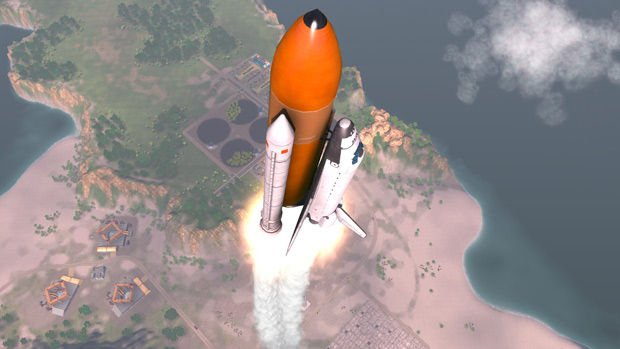 Besides the 20+ hour campaign, which supports all the other Tropico 4 DLC, the goodies Modern Times brings to the table can be fully enjoyed in the sandbox mode. A simple checkmark allows you to turn the expansion’s features on and off before you create a sandbox game, in case you feel nostalgic for those old apartment blocks. Since the release of Tropico 4 on PC, a lot of user-created maps have been uploaded to the servers as well, and these will provide some extra play time if you haven’t looked at them for the past few months.

Tropico 4: Modern Times gives the core game a much needed content injection, and turns Tropico 4 into a better game. Some additions have a larger impact on Tropican economic planning than others, but Modern Times is well worth checking out for any fan of Tropico.

I’m still waiting for that sequel to Tropico 2: Pirate Cove, though.