Trine, which came out in 2009, was a mixture of platforming, physics puzzles, and action with RPG elements. While some of these elements were stronger than others, the ability to switch between three different character types at will to solve puzzles and advance in the game made for quite the interesting concept.

Now Frozenbyte is back with Trine 2, a new adventure for the three heroes introduced in the first game. There is more platforming, physics puzzling, and action, along with a new story and villains. Most importantly, the ability to switch between characters is back and fans get to see just what Frozenbyte is up to this time. 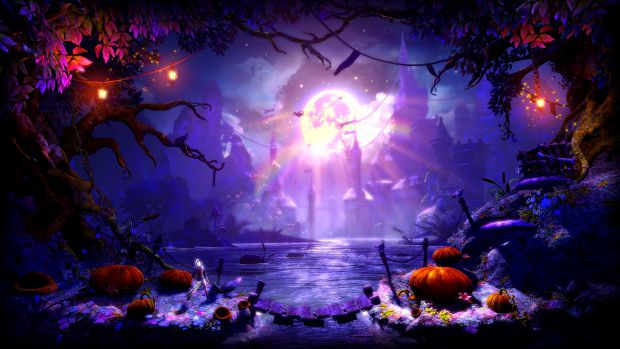 Trine 2 follows three very different individuals who were forced, in the first title, to become heroes. Each character has a specific set of skills: Zoya the thief has a grappling hook and wields a bow; Pontius, a knight, has a sword and shield as well as a two-handed hammer; and Amadeus is a wizard who can conjure boxes and planks, and is also able to levitate objects. The three classes may not be anything original, but the ability to switch between them at will is, and will be necessary as players battle and puzzle their way through the game’s thirteen levels.

Each level contains puzzles, pitfalls, and enemies to kill. They also contain death. Lots of death.

As is the case with any game in the puzzle genre, most of the solutions are found by trial and error, and quite a few of the errors will end in one or more of the three characters dying. When one character dies, you can simply switch to another (there are three of them there, after all) and continue on.

If you have a particular attachment to one of the three, however, reviving them is as easy as finding a checkpoint orb, which is almost always going to be very close to a particularly hard puzzle or one of the more challenging fights. This allows you to quickly save your progress, revive fallen heroes, and completely replenish the health of all three of them. Although the orbs might not always be there when you need them, the liberal placement helps quite a bit and in all likelihood you will be revisiting a given orb more than once. 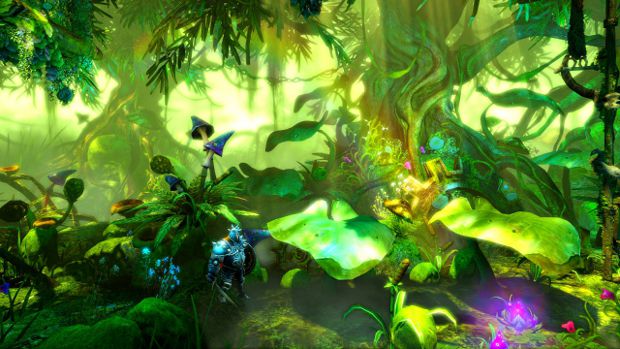 Although you may die a bit, there is an extremely large amount of freedom to proceed through the game however you want. Each of the heroes has customizing options that give ample wiggle room to allow for even more experimentation while solving puzzles or fighting enemies. So while there is an easy way to do things, by using the class that best fits a given task, it is usually only a suggestion and players are free to pick their own puzzle-solving path. In fact, there will be many times that the level itself gives you multiple options on how to continue. One example of this can be found later in the game when the player must hide from some goblins. If Zoya has her stealth ability, she can simply become invisible, or Amadeus can stack boxes and stand on top of them, also hiding from the goblins. Either way, the required task is completed.

Each character has access to five upgrades, which can be unlocked by collecting glowing blue orbs and bottles to level up. It is completely possible to go through the entirety of Trine 2 without picking a single perk, but in a game that encourages creative problem solving, the ability to enhance your characters is just one more way to do that and the added choices given to you by customizing your characters opens up the entire title even more.

Freedom to proceed how you like will become a boon during later levels when the puzzles become more difficult and the answer might not be readily apparent, or you can’t quite get the timing needed to move on. The solution you come up with might not always be the ‘right’ one, but there is no penalty for being creative. This will be important to remember as you play, because some of the puzzles and platforming sections can become incredibly frustrating (until you figure out the solution, then you might just feel a little silly for not having grasped it sooner). 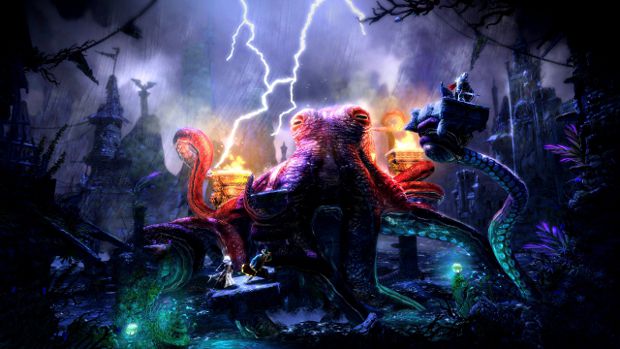 Nowhere is this freedom more apparent than in co-op gameplay, which assigns a single role to each person. Rather than limiting players by keeping them confined to one character, the ability to play with other people opens up the entire game to even more creativity. Instead of having to perform an action as one character and then switch to another, players are given the chance to work together and, if you know what you’re doing, experience a unique and fun multiplayer experience. During a puzzle, the wizard in your group might conjure a box, which he can levitate with another player standing on it to reach a goal. Or the thief and knight can work together by first freezing and then smashing enemies.

With the way multiplayer is shoehorned into many games these days, it was incredibly refreshing to play a game that seems to understand what a co-op gaming experience should be. The only downside to this is that the levels are unchanged, so if you’ve already beaten the game in single-player, there won’t be much challenge for you in co-op. If you are looking for a fun game to play with friends, on the other hand, this is a good option, especially considering the unlimited gameplay mode, which allows all three players to play whichever character they want. So if all of you want to be the paranoid wizard or the food enthusiast knight, you can. 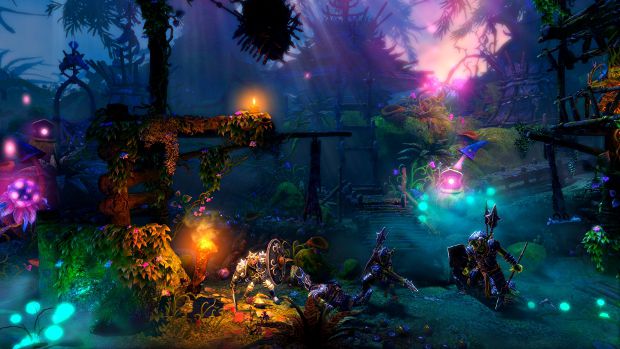 Considering how interesting and open the gameplay is, the story and combat tend to take a backseat. The tale unfolds through short storybook blurbs between levels as well as through poems and notes scattered throughout the game. The entire plot is fairly generic — the kingdom is in trouble, there is a bad guy and a damsel in distress — and not very engaging, but the poems do help to flesh out the backstory a bit. Like the blue orbs and bottles, the poems (found in chests throughout the game) are usually out of the way and hard to find. Opening them up, however, gives more depth to the the characters in the tale. Again, finding the poems is not necessary, and you can bypass them completely, but like with most of the game elements, finding them will only add to the overall experience.

Combat, on the other hand, is very straightforward and not terribly difficult, even when the enemy is a boss. It is just about guaranteed you will die because of the environment or puzzles, but it is far less likely that you will be slain by a foe, even a boss. While there is still a good amount of variety in how you can tackle opponents, this may be the least interesting aspect of the game. It is possible to kill monsters using the environment itself (goblins are just as weak to lava and acid as you are), but that can get old fast, and while fights are never bad, they aren’t usually great either.

By and large, though, Frozenbyte knew exactly what they wanted to do in Trine 2; they wanted to make a beautiful, fairytale puzzle-platformer that allowed players freedom to find their own solutions to the challenges presented, and in that regard, they succeeded. The ability to switch between characters whenever you want makes for a unique take on the puzzling genre. The world of Trine is breathtaking and a joy to explore, and the developers have a solid, enjoyable game in the second story of the Trine heroes. For $14.99, you are more than getting your money’s worth.