Triangle Strategy is very nostalgic, in some ways. It utilizes HD-2D art to deliver clean, crisp pixels that rekindle memories of the original PlayStation. Artdink and Square Enix use a lot of existing framework to build a tactics set that feels familiar, and the story centers on warring states, vying for control over precious resources, backstabbing and scheming.

Where Triangle Strategy innovates is where it shines, though. Its tactical combat might feel similar to the classics at first, but gradually introduces elements to change things up. It’s tough, but also incredibly approachable. A wide swathe of unit types and some pretty compelling map designs make it all feel very replayable. And branching paths, with a very novel method for choosing the road ahead, just adds on top.

The moment when a best-laid plan comes together is a great feeling in a tactical RPG. Turn after turn spent inching towards a goal, manipulating systems and eventually reaching the one moment where the switch flips and the board is yours. Those are the moments Triangle Strategy nails. And even when it gets long-winded and drags a bit, it’s a tactics game worth whiling away the hours on.

Triangle Strategy follows Serenoa Wolffort, a young lord unwittingly thrust into the middle of tensions between the kingdoms of Aesfrost, Glenbrook, and Hyzante. His impending betrothal is cut short by shadowy plots and machinations, and soon the shaky peace between the nations falls apart. Serenoa journeys with a close-knit group of companions, trying to protect his domain, people, and the sanctity of the continent of Norzelia all at once.

It’s a solid set-up for a tactical RPG that will immediately feel right at home for those who like stories about scheming and kingdoms. Everything in Triangle Strategy revolves around choices, characterized through Serenoa’s convictions—points he can earn through dialogue choices, in-game actions, and even something as simple as buying a bunch of items at the shop. These choices take center stage when Serenoa breaks out the Scales of Conviction at branching points, and asks for everyone’s opinion. Here, the player can opt to sway different party members to different arguments, swinging the majority towards their own interests. They aren’t easy choices, either. Do you hand over a friend to an enemy army, to keep them from marching on your doorstep? Do you side with a nation you know to be corrupt, because their aid can provide food and medical help for your ailing populace? The negotiations were a highlight of the story for me, as they really forced me to choose and defend a viewpoint, and then make specific appeals to characters. Hughette may listen to appeals based on honor and loyalty, but Benedict prefers reason and strategic benefit. I had to pick an opinion and then carefully tailor it in order to win the room.

While the narrative shines in the negotiations and big moments, Triangle Strategy does feel extremely long-winded at times. Even compelling scenes feel like they take longer than they should to play out, and the writing sometimes comes off a little awkward. The voice acting also oscillates between stellar and less-than-stellar. It’s ultimately a compelling story, but it still wasn’t long before I found myself speed-reading through dialogue boxes. There’s also a noticeable gap between story missions, even with mental battles available to grind for resources at the encampment. It felt like I could go for a pretty good amount of time between actual fights, depending on where I was at, and that was sometimes a point of friction when I was just eager to get on with the fight.

The HD-2D pixel art is also a very good look, even if sometimes I noticed a few blips or oddities. I would’ve liked the full portraits of characters put to use a little more often than just in the menus, but each character’s sprite is also recognizable and memorable. Accommodating for how many ways the camera can look at each map is no small feat, and yet somehow battles are both legible and still look darn good, especially when massive spells like a giant fireball rain down on the field. 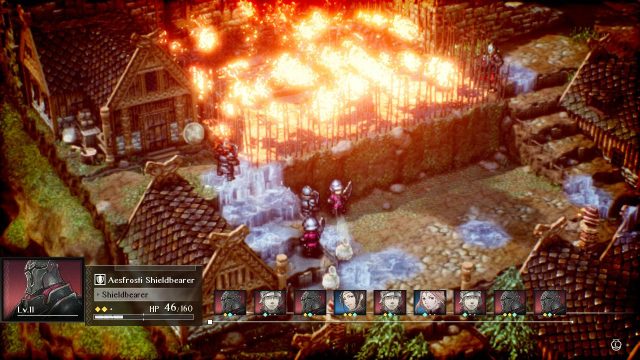 Battles are the heart of Triangle Strategy though, and they are brilliant. The easiest comparison point to Triangle Strategy‘s tactics would be something like Final Fantasy Tactics or Tactics Ogre, or even Fire Emblem. It’s a turn-based structure, where units each get a spot on the ever-rolling timeline, moving and attacking. There’s no mana, but gradual accrual of TP; the more powerful an ability, the more TP it’s going to cost. Often I had to make the choice of spending a turn building up TP for a big move later, or spending what I had before I lost it.

Or maybe Julio, my walking battery, could infuse an ally with some TP for me. Every character is their own class, with their own individual playstyle. Even when they slot loosely into general tropes—tank, healer, archer, and so on—they each bring something of their own. Hughette is a mobile archer who can fly, while Trish can use an elemental arrow attack and excels at plundering spoils. Two characters might both offer healing, but one might be more of a frontline fighter while the other stays in the back, using moves like Haste on allies to bring their turn up faster.

Individual unit types already add a lot of variety, but so do the maps. First off, magic is more than just a ranged means of damage in Triangle Strategy. It also interacts with the terrain, creating solutions—or problems—with every use. Fire can ignite wooden structures, which helps a ton when the enemy has barricades, but it also hurts units who walk through it. Ice can put the fire out, and fire can similarly melt ice, creating puddles of water which can conduct electricity to shock other units with lightning spells. You can probably start to see how this all links together into a surprisingly intricate system. In one map, I was fairly under-leveled, but noticed that the enemy had to get through some water to reach my forces. I deployed two mages who wield lightning magic and my mobile TP charger, and spent turn after turn roasting anyone who tried to ford the shallows. 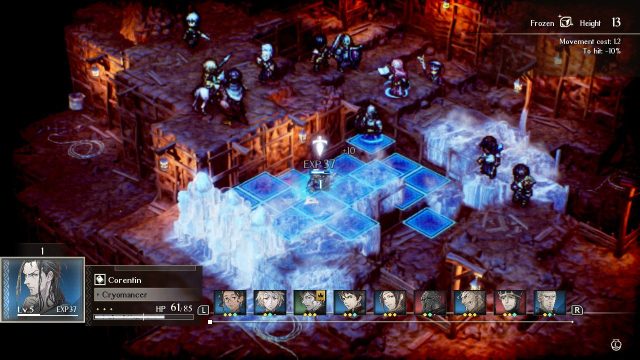 As the campaign carries on, maps get even more intricate. New objectives pushed me to adapt my go-to squad to new approaches. Map-specific mechanics like a zipline between two boats or a bunch of minecarts add new dimensions to movement and deployment. Even something as simple as height advantage becomes crucial, as it becomes a potential perch for my archer to rain down fire or a trap for Jens, my blacksmith, to rig with a spring that will send foes flying off the cliffside. It’s surprisingly effective.

These systems are crucial to take advantage of, because Triangle Strategy is not a tactical RPG I could just auto-pilot through. Playing on the Normal difficulty, I was often swiftly and decisively punished for poor play, especially when attempting missions while below the recommended level. While units like Anna and Hughette can quickly become MVPs, I couldn’t just rely on a single unit to wipe the map either. Follow-up attacks, status effects, and aforementioned territorial hazards can all easily conspire to wipe out a strong unit.

Yet Triangle Strategy‘s difficulty is surprisingly well-measured, and offset by a wealth of quality-of-life features. Threat squares and red arrows indicate where a unit is safe or in danger. Tons of info is available in a few button presses, whether it’s learning what an ability does or seeing how long a bomb has until it detonates. If the player retreats from a battle or loses, they get to keep any experience and Kudos, a meta-progression resource, earned in that loss. So yes, even if you keep ramming a brick wall, you can still break through it with grit and determination.

Difficulty can be swapped at any point. And Quietuses, a set of abilities that can be used on any of your turns, act as limited trump cards to swing a battle if things go south. Tank is taking too much damage and your healer’s turn is too far away? Spend a Quietus point to heal him, or a different ability could move the healer’s turn to be the next one up. Or maybe use a different one to move him away. 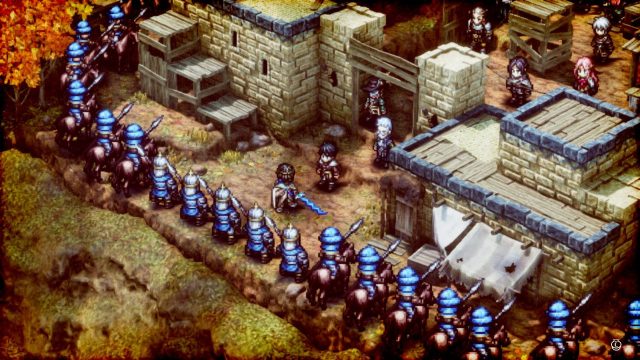 Triangle Strategy feels like a really good way to introduce newcomers to this genre, utilizing both staples of the tactical RPG genre and making a lot of modern quality-of-life adjustments. The first time I used the classic cross-shaped fire spell and realized it didn’t friendly-fire on my allies, I was shocked. It’s a game-changer! Add in that there’s no permadeath, and it feels incredibly approachable.

More than that, the myriad systems and lack of permadeath let me really engage with the potential drama of a battle. In my review-in-progress, I described a moment during an early mission where everything went bad, and I made a last-second compromise of my own convictions to seize victory. In a permadeath game, that doesn’t happen. I lose one unit, I reset the map and play again, until my optimized plan comes to fruition.

I’m not saying one is better than the other, and I’d like to one day try a no-death run of Triangle Strategy. But foregoing what some might consider a genre staple encouraged me to actually fight a battle out. It’s a surprisingly good feeling to eke out a win in Triangle Strategy. I’ve had fights where only a couple units are left standing, on the last dregs of health, having overcome seemingly insurmountable odds.

Those moments stick with me the most, as I now look at restarting the whole campaign over. There are several different endings, and an excellent New Game Plus system that keeps the tension high while letting me continue building my army. There are units I’ve yet to recruit, and the possibility of a rumored Golden Route to clear. 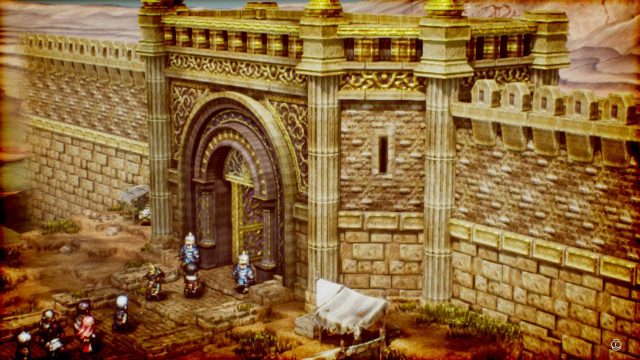 Honestly, though, just playing more of Triangle Strategy‘s combat is reason enough to keep going. I enjoy this game so much, even while seeing the ways in which it just barely falls short of the classics. Its narrative is a little too slow and ill-paced, and it felt clunky to search the map for green dots indicating side stories between each major development. Even in other similar games with a narrative-heavy direction, there’s more moments of gameplay breaking it up, and breezier pacing to maintain some forward momentum and urgency.

Triangle Strategy stumbles just enough in those areas to note it, but excels when it comes to tactical combat. It feels right at home on the Switch, as a perfect blend of strategy and RPG to keep coming back to, with just enough reasons to keep exploring post-credits and alternate routes. It may not be a deft landing, but Triangle Strategy is ultimately the tactical RPG I was hoping it would be, holding its own in an increasingly competitive field.