Trials of the Blood Dragon is a crossover title that doesn’t understand the appeal of either of the inspirations that it’s drawing from. It has bike riding like the Trials franchise and it has over-the-top action like Far Cry 3: Blood Dragon, but those self-contained games are much better examples of the systems that made them popular. Individual parts outweigh the sum when it comes to Trials of the Blood Dragon because the sum is a confused mess of a game. 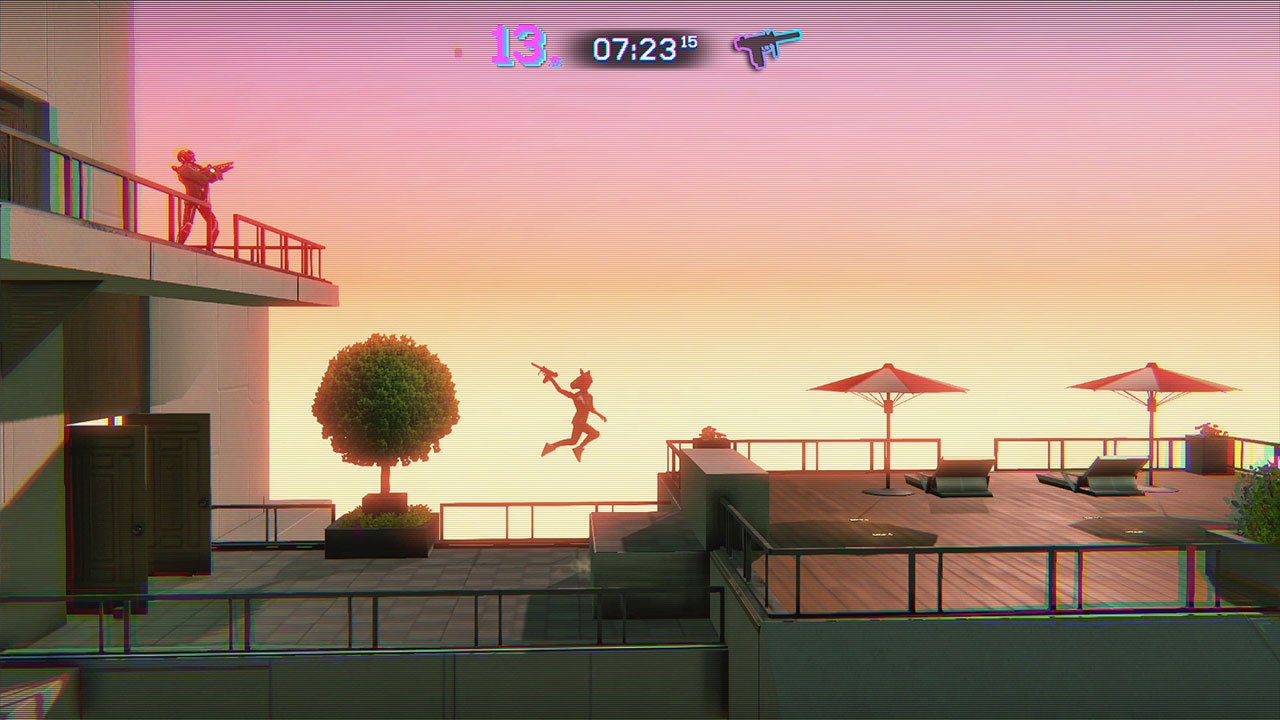 Ubisoft hides what Trials of the Blood Dragon is, and rightfully so. Its name and reveal trailer would lead you to believe that it’s a biking game in the Blood Dragon universe. That’s a mere fraction of what it is. It’s also a loose-controlling side-scrolling action platformer with twin-stick shooting. Also, you jetpack through space at one point. And, there are boss fights. Oh, and sometimes you become an RC car. And…

The point is that Trials of the Blood Dragon is nothing but gimmicks piled on top of more gimmicks, seemingly endlessly. Across its 27 levels, the game constantly introduces new things to complicate gameplay. The issue is that they rarely enhance the experience.

The most egregious examples come in the Trials-like levels. The likes of grappling hooks and pinball flippers are emblematic of the way that developer RedLynx has stripped away the technical excellence that always made Trials special. Even more problematic are the splashy visuals and scene transitions that make up a lot of the levels. They’re constantly jarring in a way that can make a faultless run feel more lucky than skillful. That’s the exact opposite of the sentiment that Trials players want.

The many times when you’re on foot are no better. Trials of the Blood Dragon has awkward, stilted platforming and shooting — the kind you’d expect from a game much older than this. It could be overlooked if it weren’t drawing from a series that predicates itself on precision. But, Trials of the Blood Dragon is always telling you exactly how many times you’ve screwed up — a statistic that’s tougher to swallow knowing that you could execute if only the game’s sloppy mechanics weren’t pushing back so hard.

This is all a shame because everything happening around Trials of the Blood Dragon is generally excellent. Original Blood Dragon protagonist Rex Colt’s two kids are the pair of bratty teenage protagonists, and they’re handpicked to continue his jingoistic mission to save America from communism. A lot of the story plays out in post-level animated vignettes, but there’s also a good amount of in-game dialogue to string everything along.

However, the most effective narrative dressing is often the levels themselves. Being told that the Blood Dragons are out of control is one thing, but watching them fuck up everything in the background has more weight to it. If there’s one individual and isolated aspect of Trials of the Blood Dragon that RedLynx really excelled at, it’s the interesting and exuberant stage settings. But even that’s sullied by the fact that the stages usually conflict with and impede the gameplay.

[This review is based on a retail build of the game bought by the reviewer.]