A pair of World War I soldiers, both having lost their legs in the conflict, are exposed to a mysterious radio broadcast which has granted them the intellectual brilliance to overcome their disability through science (and killed everyone else who’s heard it).

Frank Woodruff created the Trenches; armored walkers that allowed him and other wounded soldiers to regain mobility. Vladimir Farnsworth decided to simply conquer the world by running a series of tubes through it, allowing him to send his Monovision troops anywhere on Earth in an instant to spread the deadly broadcast which inspired him. Now, former allies have turned into bitter rivals as Woodruff commands his Mobile Trench Marines in a campaign to defeat Farnsworth once and for all.

Does that sound awesome? If you answered yes to that question, I have excellent news: It is. 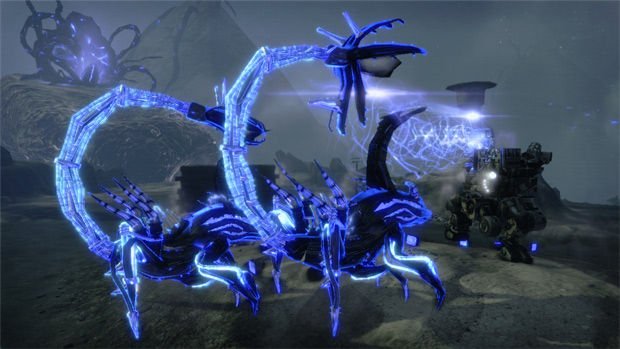 Trenched combines elements of arcade-style “mech” games with those commonly found in tower defense titles. In the vast majority of missions, your goal is to defend one or more targets from waves of enemy aggressors. To do this, you’ll man a Mobile Trench and manage defenses using a combination of on-board weaponry and a variety of weapon and support emplacements.

Trenches are built around a chassis and each has a specific number of weapon and emplacement slots. Weapons placed on the right and left shoulders of the Trench can be whatever you want them to be, provided the gun isn’t too large for the number of slots you have, and you can equip multiple guns to fill out all your slots. Defensive emplacements come in three categories and different chassis can support up to four of them but are restricted to a limited variety of categories.

In battle, your Trench is controlled like any third-person shooter. Triggers correspond to the left and right weapons. Using the directional-pad, you can select your active turret and place it by holding down a bumper. It’s all very simple and straightforward to use. Placing turrets spends a resource called “Scrap,” the remains of destroyed Monovision units and you have an onboard magnet to draw that stuff in. Turrets can also be upgraded twice by spending Scrap, dramatically increasing their abilities. 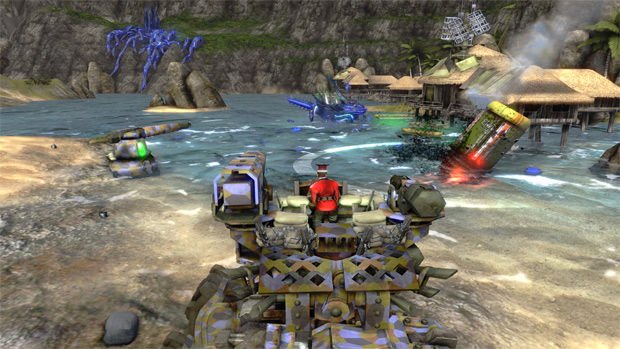 The mechs are big and clunky beasts. Even at their smallest, they aren’t terribly fast on the ground and if you plan on using special abilities from your legs, they require a bit of wind-up/wind-down time that can leave you pretty impotent for a couple of seconds every time you use them. It takes a bit of adjustment to get the hang of and adds a nice bit of tension to the decision whether to deploy them.

Your enemies are many and varied. Mammalian and insectoid accumulations of wires, antennae and tube televisions (hence their derogatory nickname, “Tubes”), they’re both fearsome and beautiful. Most gun directly for the target you’re defending, though there is a nasty grenade launcher who aims at taking down any emplacements in its path. Explosive Blitzers and powerful Snipe Tuners aim directly at you in an effort to disable your Trench. If you’re taken down, the Monovision can quickly overwhelm while you try to get the Trench back up and running by hammering a button in single-player or with assistance in from another Trench in multiplayer.

What’s fascinating about the game is how well it works as either a mech shooter or a tower defense game — to a point. You can probably push your way through about half of the missions in single-player almost entirely on strategies appropriate to one or the other type of game on the first or second try but beyond that requires some level of mastery in both. The game rarely forces you to choose one approach over another entirely, save for boss encounters at the end of each theater more typical of the all-action play the game resembles at first glance. 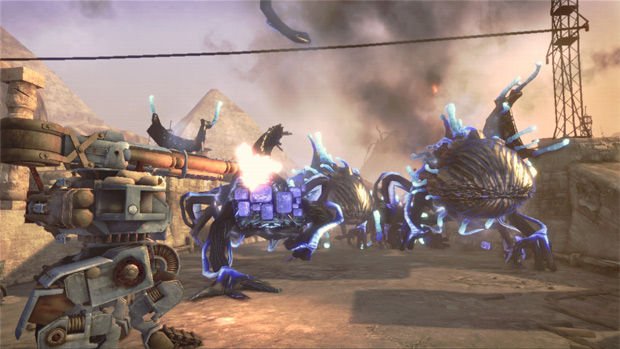 It’s another example of Double Fine making an effort towards unique design while remaining highly accessible. Admittedly, that exposition material that you read above comprises a considerable chunk of the actual story in Trenched, which winds up kind of limping along through in-mission exchanges between Woodruff and Farnsworth. Cutscenes between stages feature Woodruff recounting the events you’re living with period-appropriate pulp magazine covers to illustrate the story.

There’s nothing wrong with the writing itself. In fact, it occasionally borders on brilliant in a stylistic sense and tons of delightful touches are peppered throughout the flavor text in the multitude of Trench components and emplacements. There’s just not much of substance in the story, something that’s totally fine for a game as clearly focused on the play as Trenched is. It’s merely a dramatic enough alternate history setting that I feel a tad disappointed with how little is revealed of it.

At the end of each mission, you are awarded with loot and cash, along with a bronze, silver or gold medal reflective of your performance. Apart from specific equipment given as rewards for completing a mission the first time, all loot earned is selected at random from a range of level-specific items. Cash can be spent in the shop on trench parts and emplacements, but you’ll probably wind up just blowing it all on clothing items for your marine. 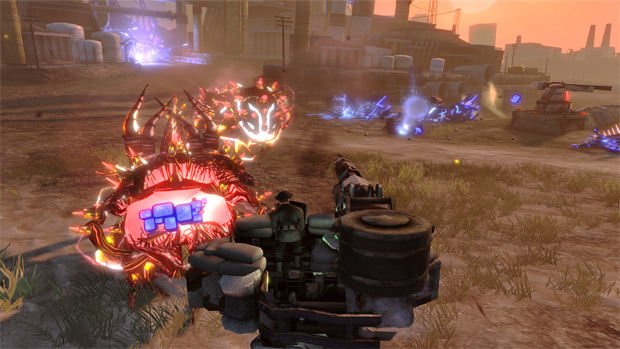 That’s because the gear you’ll accumulate from missions is almost always better than what’s on sale. And you’re going to get a lot of loot. Loot boxes are dropped at random occasionally, but you’ll see most of them from the game’s larger, sub-boss enemies who always leave a little something behind to collect. Some missions will see as many as half a dozen of these beasts which is in addition to awards for simply finishing a stage. And then there’s the stuff that you get for completing bonus challenges for kills with specific weapons, total missions, scrap collection, etc.

What happens, unfortunately, is that you wind up with almost too much stuff.

It’s not a problem for weapons and emplacements, where the cream rises right to the top and the best tool for any given job is usually within the top three items. But a build-up in chassis and legs is a little trickier to navigate. Legs aren’t necessarily clearly better than one another except in special ability while chassis often have important differences between different models of the same make in terms of emplacements and weapon slots. So, swapping around weapons and emplacements between stages is quick and easy but you may be scrolling through menus a bit if you plan on rebuilding entirely and that may annoy your multiplayer partners.

And you had better plan on having multiplayer partners. If you aren’t playing Trenched with other people, you’re only playing twenty-five percent of the game at best. Additional players have to act as a cohesive unit in planning and executing a strategy, as enemies get significantly tougher the more people you have playing. A strategy that doesn’t incorporate both direct assault and well-placed turrets will fail almost every time.

Allocation of resources gets trickier the more players you add as well. While the enemies get bigger, they don’t drop more scrap and their numbers are dramatically bolstered by more players. Some resources do trickle down to all players regardless of who collects, but one guy doing all the in-your-face work is likely to wind up with a high percentage of Scrap better spent by an Engineer-class Trench who spends less on placement and upgrades. 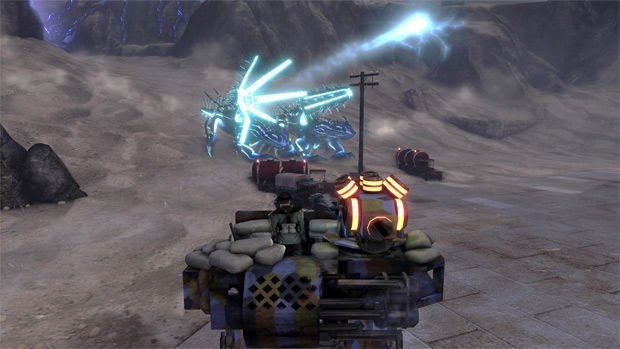 Multiplayer is clearly the focus of Trenched and they’ve designed some pretty inventive ways to encourage that. First and foremost, the netcode performed quite well (though there weren’t enough players available for Matchmaking to be properly tested at time of review), only dropping once in many rounds of play. Then there is the USS McKinley, the base of operations for the Mobile Trench Marines which doubles as a hub area and multiplayer lobby.

This McKinley is where stages are selected, Trenches modified and players invited. You can view the loadouts of the Trenches your teammates will pilot and stages are all unlocked to the progress of the most experienced player. If you finish a stage in multiplayer before you can access it in single-player, your progress is still saved and it will show as completed when you’ve finished all preceding missions. Perhaps most important, the McKinley is where you can perform a salute to your teammates themed to the hat worn by your Marine. And since all the animations are able to use the full analog range of the trigger, you can easily make your Marine look like he’s fapping to all other players, making Trenched a prime contender for Game of the Year.

Once you’ve played with someone, they join your “Regiment,” a collective scoring pool for a new set of performance challenges. These numbers get pretty absurd and the only way to accomplish them is to either play with people who play frequently or do pretty much nothing else with your time but play Trenched alone for what I would estimate at around 70 hours. 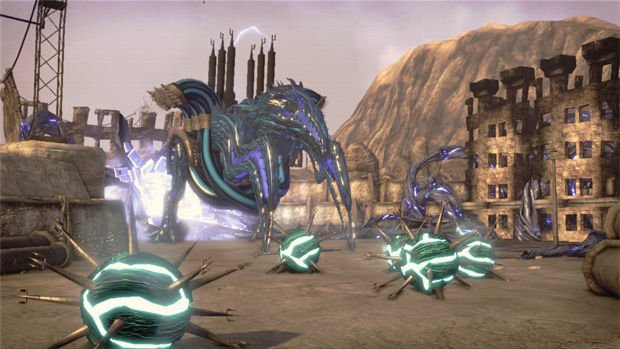 Trenched is a hell of a fun game that just has a few minor blemishes. From the grimly nostalgic art design to the thrumming soundtrack and exceptional voice acting, it’s a slickly presented package from start to finish. It manages to pack just enough complexity into its strategy to offer a challenge without sacrificing action-oriented gameplay that gives a direct sense of agency and control. Minor gripes about inventory maintenance and a mediocre story should not dissuade anyone from making this very wise purchase.