Which way to the gun show?

As a combination of the first-person shooter genre and the modern-day roguelikes, Tower of Guns is being pushed as a “lunchbreak FPS.” After playing, I can say this is a pretty accurate description, except I only have 40 minutes for lunch. Runs can be completed in under an hour, but tend to lean more towards that hour mark. Tower of Guns will also require quick mouse dexterity and your probably-now-rusty circle-strafing and bunny-hopping skills.

It’s addicting, satisfying, and nails its themes better than most games of its ilk. As if we needed another great roguelike, in steps Tower of Guns. 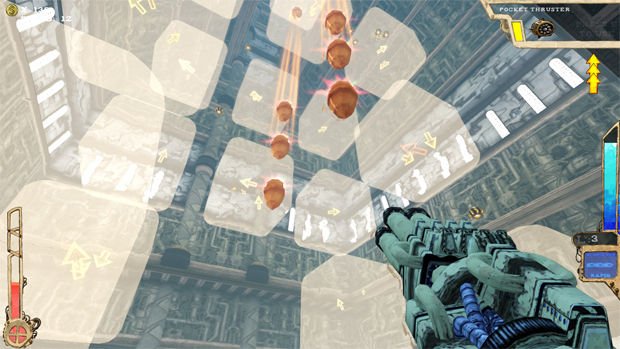 At the beginning of each game of Tower of Guns, the player is assigned a random storyline. These can range from a delivery guy trying to deliver some groceries, to a federal agent who happens to also be a dog, or even the developer and his brother chit-chatting away about the game. The latter is one of the most interesting, since it serves as a developer’s commentary while playing. The story will progress at the beginning and end of each new floor, and has no impact on the actual gameplay. In fact, you can even turn off the “silly dialogue” if you wish, though it’s not hard to ignore in the first place.

These stories are indeed very silly, but it’s the perfect amount of silly. They’re written pretty well and in fact I wish that I could choose which story I got, so that I could try to hear the ending. Since the game’s not the easiest to fully complete, it is possible to get invested in one of these storylines without seeing the ending, which will delay that closure until the next time the game gives it to the player.

The main objective is to get to the top floor and defeat the final boss without dying. Tower of Guns uses permadeath, meaning that a single death will send players back to the beginning. Nothing carries over between runs, except when guns and perks are unlocked, but each run starts fresh with the player choosing a gun and a perk. Guns are decently varied, the basic pistol, machine gun, and rocket launcher are available, but there’s also a “Mini-LHC” (Large Hadron Collider) and the spikeball launcher which are much more unique.

Gameplay in Tower of Guns is fast — really fast. Circle-strafing and bunny hopping are two key aspects to getting around and surviving. Bullets and rockets and spikeballs and bombs and plenty else are constantly bombarding the player, making evasion the only real way to stay alive. It’s reminiscent of older shooters like Unreal Tournament, except this time it’s a FPS-roguelike instead of an arena shooter. It’s also really satisfying, once all of the intricacies are understood (and the mouse sensitivity is adjusted to the player’s liking).

Killing enemies will force them to drop collectables, such as health orbs, experience orbs, powerups, or currency. Experience will increase the player’s weapon level, up to a default level of five, but taking damage will lower weapon experience in addition to taking health away, so be careful! Currency can be used to buy powerups scattered throughout the levels either in plain sight or hidden away in a secret area. 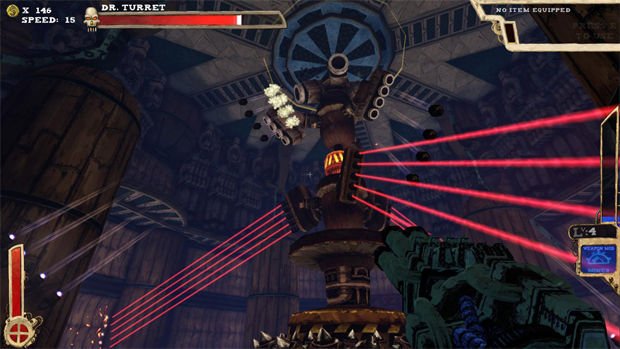 Speaking of secrets, gosh there are a lot of them. After completing a level, the loading screen will display what percentage of secrets the player has found so far. I’ve never found more than half of the secrets in a single floor and trust me, I’ve tried. Some will be hidden behind fake “walls,” some are out of sight around a corner, and others I’m pretty sure don’t exist and this game is intentionally lying to me. Seriously, they are deviously hidden.

As to the powerups, they can alter the player by increasing stats like speed and damage, add more jumps, or even adjusting the difficulty. There are also gun mods, which can turn a rocket launcher into a shotgun-rocket-launcher or a sawblade launcher into a sawblade launcher that launches sawblades which turn into mines when they hit a wall. Finally, there are useable items. These can be literally anything, as one run I had one that created a healing cube I could stand in to regain health, while the next run I was summoning a bunch of cat heads that sprout up out of the ground and did…..nothing.

This variety ensures that each run is unique, as you go from a speedy quadruple-jumper with a sawblade launcher that shoots fire mines to an unkillable double-jumper who shoots rockets that take up the entire screen when fired because they’re so big. I will say that without gun mods, runs can bleed into each other when using the same weapons and perks. I know it’s all luck, but it does seem as if gun mods are the least common of the drops. That being said, I have had a single run that saw at least three gun mods, which then made me sad that it is only possible to have one at a time. 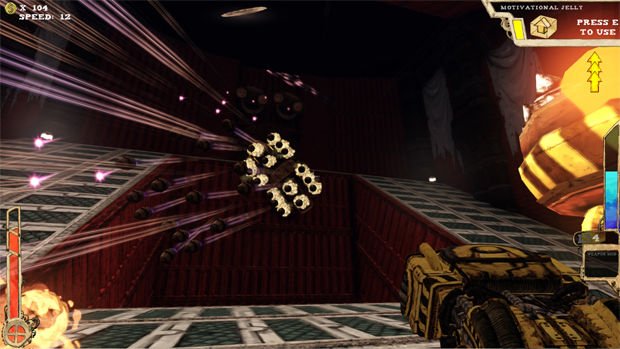 Levels and rooms are randomly ordered, but the room layouts will never change. However, the enemy types and placement within the rooms does change. This way, encountering the same rooms in multiple runs actually feels like progress instead of monotony. Knowing the layout, I still felt prepared for the threats ahead, while simultaneously being excited to see which enemies were going to try and murder me, even after dozens of attempts. Now, dozens might not sound like a lot of attempts for a roguelike, but considering that many runs will take upwards of 30 or 40 minutes, it’s nothing to shake a stick at.

Tower of Guns isn’t exactly easy, either. Sure, certain rooms and bosses are easier than others, but to completely get through the main mode will take some luck and a lot of skill. The last boss is a bit of a spike in difficulty, but that’s hardly surprising given that it’s the last boss. There’s also an option to turn on Endless Mode, allowing players to keep moving up floors until they die.

The visual style is perfect for the tone of the game. Everything is kind of dirty, yet the textures seem clean at the same time. Everything makes the player feel like a stranger in a strange land and unwelcomed, as if the onslaught of bullets and rockets wasn’t a clear enough message. The design of the enemies is on the simpler side, but it’s really the size of the enemies that stands out. Sure, a cannon isn’t too threatening but what about a cannon that is ten times the size of the player and shoots equally big rockets!

The music and sound effects also deserve special mention, as the music fits each level’s theme perfectly. Super special mention goes to the music for the “Warehouse” level. And by “super special mention” I mean OH GOD that music is creepy. It eventually occurred to me that I was skipping through every Warehouse level in order to avoid being scared out of my pants by the music. It’s seriously creepy and fits perfectly with the dim-lit level design. I hate that music in the best way possible. 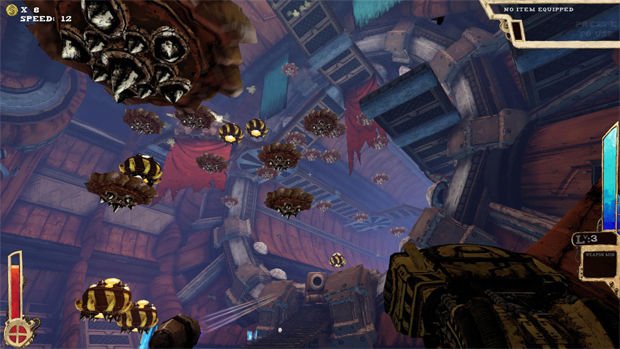 Tower of Guns is surprisingly addictive. I know that’s sort of the point, considering it has its roots in roguelikes, but I thought that the longer run times and FPS nature might detract from that. Boy, was I wrong. I do wish that there were more variety in the items being picked up and perhaps a higher frequency of gun mods, since as it stands many runs tend to bleed into one another, which can be a killer to roguelikes. Despite this, I find myself always thinking about my next run and postulating as to where in the flipping world some of those secrets are hidden.

Each new combination of guns and perks can create a brand new playstyle in order to keep things fresh. Tower of Guns is a beautiful marriage of two of my favorite genres, the first-person shooter and the roguelike. Now if you’ll excuse me, I have to get back to my run I paused to finish this review.