You remember back in the nineties when we had the fighting game boom? Dozens of “me too” titles with increasingly silly premises, all vying for a piece of the one-on-one fighter pie. Rise of the Robots, Primal Rage, Eternal Champions, they all came out of the woodwork with their own absurd concepts and varying degrees of quality.

Tournament of Legends reminds me of those days.

Strangely, I don’t mean that as a bad thing in the least. Read on for the full review of Tournament of Legends. 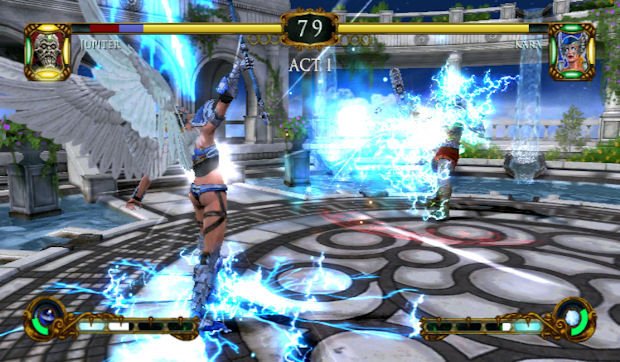 I stopped playing fighting games after the 16-bit era, mostly because they had outpaced me by miles. I could no longer perform the increasingly intricate combos, I paid no heed to L-cancels and hit boxes, and eventually I just became terrible at any one-on-one fighter that appeared. It’s no fault of the genre, I lay the blame entirely on my own lack of ability and willingness to learn. Of course, it means I get to miss out on a lot of cool fighting games.

Tournament of Legends takes us back to a more humble age, when games could be shamelessly silly, characters were allowed to look or sound stupid, and fighting games didn’t require ten-hour long button combos in order to be considered enjoyable. High Voltage’s Wii fighter is nonsensical, pointless and simple, and that’s what I really appreciate about it.

The premise involves twisted quasi-mythological characters beating the crap out of each other so that they can fight Thanatos, the God of Death. You have Marcus, the arrogant gladiator, Narcia, the Gorgon, and Jupiter, the golem who thinks he’s a God, among other equally asinine warriors. Each character is one of three classes — Strong, Rugged or Lithe. Strongs are slow but powerful, Lithes are weak but fast, and Ruggeds are in the middle. It’s all fairly elementary stuff. 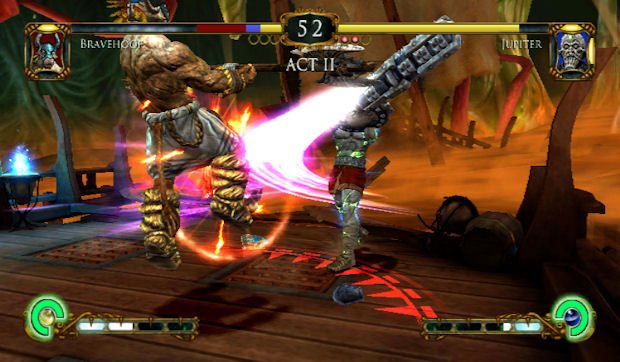 Characters can be customized with the weapons of any other character they defeat, and can also equip enchantments that bestow special abilities when activated during battle. Vampire, for example, replenishes health with each attack, while Lethal does extra damage and Shock randomly removes an opponent’s health.

The combat itself has been designed entirely for the Wii in a 3D combat arena. Obviously, this means that things are somewhat stripped down, but again that is something I really appreciate. Basic attacks are performed by swinging the remote or the nunchuck, while block-breaking strong attacks require players to hold down Z while swinging. Weak projectiles can be thrown with C, and characters can block with B. In addition, each character has four special moves, three unique to their character, one unique to their weapon. These attacks draw from a refillable power meter, and are performed by holding the A button while pushing the nunchuck stick up, down, left or right.

Every attack is absorbed by four pieces of armor that protect the arms, head and body of each character. The armor sustains damage with each hit absorbed and eventually comes off. It’s rather cool to see the armor littering the ground after each match, especially when some of that armor involves entire robotic heads. 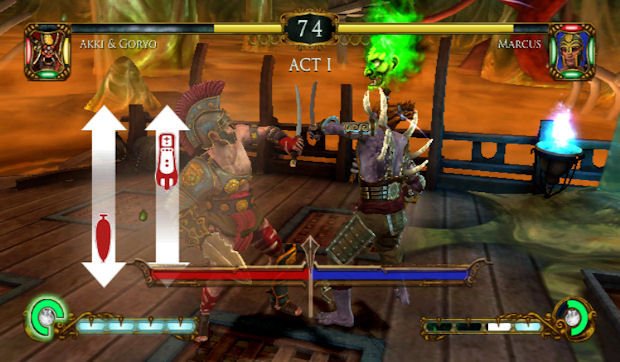 Of course, it wouldn’t be a Wii game without some token waggling, and Tournament of Legends provides. When a character is knocked out, they have a chance to regain their strength and keep fighting up to two times, while the current victor can restore their powers. The downed player must shake the remote and nunchuck up and down to refill their health, while the one left standing performs QTE-style prompts to regain their powers. In addition, various mythological beasts can randomly attack the combatants during a match, requiring QTE motions in order to avoid taking extra damage.

If a round of combat goes on too long, each opponent must restore health and armor in a minigame before fighting again. Rotating the nunchuck restores the health and waving the remote up and down fixes armor. While a nice idea, it does get in the way of the fighting and AI opponents seem to get an unfair advantage, licking their wounds at a far greater pace.

On the normal difficulty, Tournament of Legends isn’t the toughest game around, and players will likely only feel a hint of challenge when facing their obligatory recolored selves and Thanatos. Tournament of Legends is a fighting game anyone can play, and while elitist hardcore fighter fans will doubtless be turned off by this, I personally think High Voltage did a commendable job in making such an accessible title that works really quite well on the Wii. 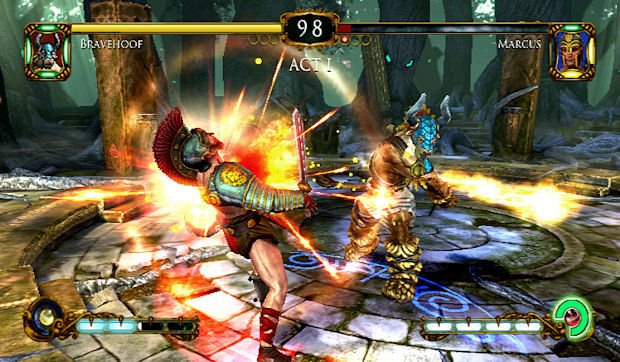 Of course, there are problems, the major one being that Tournament of Legends often doesn’t feel responsive enough. Dodging, blocking, attacking and especially the QTEs can sometimes feel too sluggish, and this is especially frustrating against AI opponents who don’t seem to suffer the same problems. The game manages to remain fun in spite of this irritation, but it’s an irritation nonetheless and one that can sometimes cost precious character health.

Tournament of Legends isn’t the prettiest Wii game, nor is it the most deep and engaging. What it is, however, is a good little fighter that makes good use of the console’s interface and truly brings back the feeling of playing a fighting game in the nineties. It’s no Eternal Champions, but it’s easy to get into and provides just the right amount of innocent, unpretentious fun. For under thirty bucks, that ain’t too bad!