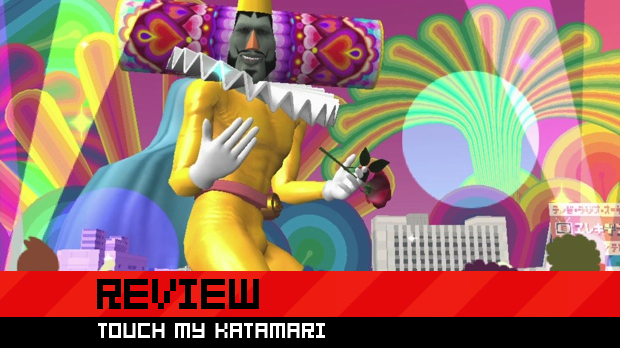 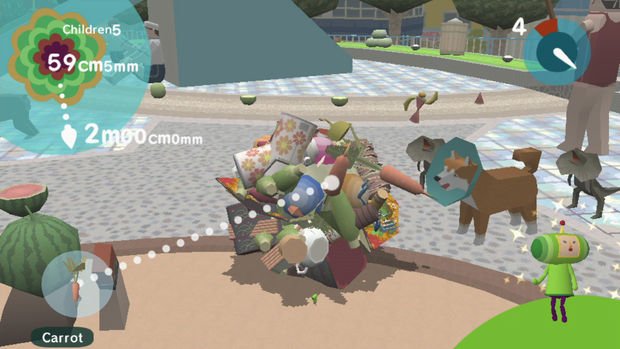 No, I really laughed out loud. Often. Namco Bandai took the harsh criticism of the most recent Katamari Damacy games and funneled it into the latest sequel to serve as a sort of storyline. While the first two Katamari installments were great with their junk-rolling action, killer music score, and strange humor, the ensuing ports and spin-offs quickly devolved into a sad approximation of the originals, making fans sad, and making the King of Cosmos and his princes look washed up.

In Touch My Katamari, the King really is washed up, and realizing this he lets in-game fans approach him to vent, with the intent of repairing their relationship. They line up on one side of his strange, multicolored head extension to gripe, and it’s on you as the Prince to roll up a solution to address their concerns. This makes for very snarky, self-aware dialogue, and it manages to turn the King’s babbling into something interesting for the first time in several games.

Gamer gripes that you’d find on any message board or comments section make it into Touch My Katamari and actually become inspiration for levels. Hilarious animated story chapters run alongside the King’s story, following a slob of a gamer that is trying to get his life together, just like the King. Very clever, Namco Bandai. This is their silliest game yet. 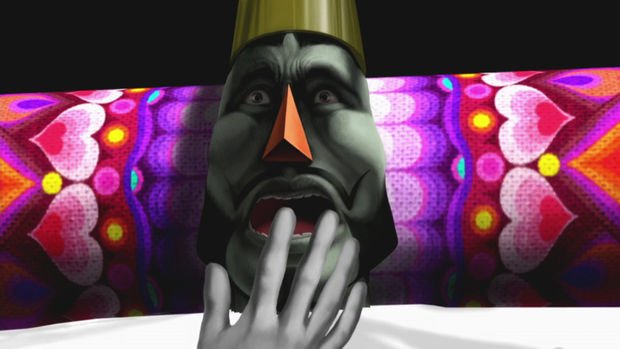 For the first time we have a portable game system with two analog sticks for a Katamari game, which means that Touch My Katamari can be controlled exactly like the original titles. What a relief! Of course, this being a Vita game, there’s also a touch-control option, but it becomes tiring as you actually have to flick continually to roll the ball. A more welcome new input method lets you use either the front or rear touch panels to stretch or compress the Katamari with a two-finger pinch or pull. A wide, flat Katamari helps you pick up smaller items in a roll, and a tall, compressed one allows you to roll up to reach areas that would normally be inaccessible. While this addition makes item gathering a bit easier than before, it also lets you form your own rolling strategies to help you make the biggest Katamari in the fastest time.

The goal of rolling up a big ball of junk in a set amount of time is still the same, but there’s a few unique challenge types to mix up the standard action. Some have you trying to create the biggest Katamari by using only a set number of objects. Others have you attempting to roll up only one type of object. One of my favorites (that’s also in Beautiful Katamari) has the Prince working to form the biggest ball of food with the lowest calorie count; the item indicator gives you a caloric count for each item rolled over. They’re nice ways to switch things up, but at the end of the day it’s the same rolling game we’ve all played so many times already. It’s just funnier, controls are better, and looks are nicer. 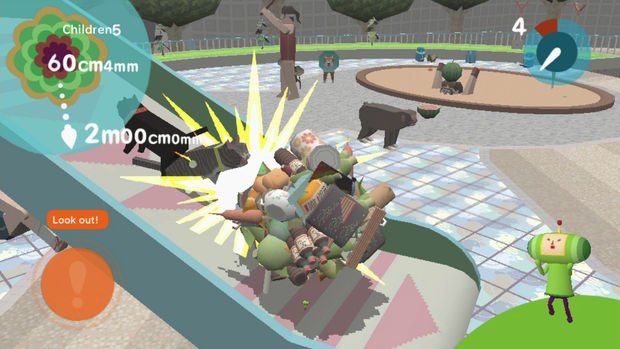 When rolling gets old, you can take a break by enjoying the silly collectibles and side features Touch My Katamari offers. Poking through galleries of rare collected items is fun, but I preferred clothes shopping for the King. He has his own dress-up room where he’ll model anything you buy for him — even women’s clothing. If you weren’t laughing already, wait until you see the King’s poses. These clothing items and other unlockables, like soundtrack remixes, are purchased with candy pieces, which are rewarded by the King and his followers after each mission.

It’s nice to see that Namco Bandai has breathed a bit of life back into the Katamari franchise. Touch My Katamari looks and plays better than ever, has a hilarious new story, and new touchscreen controls give players additional ways to roll their own, but that all doesn’t change the fact that this is basically the same game we’ve played so many times already.

If you want to see the King of Cosmos at his funniest in his first portable dual-stick roller, Touch My Katamari is worth a buy. Everyone else might want to save their launch-day budget for a more original title.

Filed under... #Katamari Damacy#PSP#PSVita#Touch My Katamari