Toribash is a turn-based strategy/fighting game hybrid that does a lot of interesting things. It’s been around for a while as a free Mac/PC game, but it was only recently that the game hit consoles. The big difference is, the game costs $10 on WiiWare. If you’re like me, you expect that $10 to go towards something. With Cave Story (another free PC game gone for-profit on WiiWare), we got redrawn graphics, re-worked music, two new difficulty modes, and a load of other bonus features.

With Toribash, we don’t.

Is there enough here to validate a $10 purchase? Hit the jump to find out.

Toribash is weird stuff. The whole game is based around controlled chaos; an equal mix of strategy and luck. Have you ever imagined yourself in a fight? It’s different from a real fight. In a real fight, everything is happening so fast that you barely get to think. If you know how to fight at all, muscle memory will take over and your body will end up reacting before your brain has a chance to. If you don’t know how to fight, well, your brain will probably try to give you some ideas on how to defend yourself as you get broken in multiple places. If you’re sitting around thinking about what to do next, chances are you’ve left yourself wide open and are already getting your butt kicked.

The same goes for most fighting games. Sit and think too long, and you’ll let your guard down. If your opponent knows what they’re doing (or even if they don’t) that may be it for you. It’s this “no time to think” thing that makes Toribash different. There’s tons of time to think in this game. It’s like fighting in slow motion. You can really take your time and plan out exactly how you want to attack. Actually, you have to take your time and plan things out. Even throwing a basic punch is a three-to-four step process.

In most modes, you get about twenty seconds to position your body parts the way you want to. As you’re doing that, you’re opponent is doing the same. As you position your parts, you’ll see a little shadow of your character that shows you where your current set of commands will send your body in the next turn. That helps you to predict what your next move will be, but there is no way of predicting what your opponent will do. Throw in a healthy dose of rag doll physics, and you should get what I mean by “controlled chaos”.

It’s pretty exciting to play a fighting games that feels this different. Just about every fighting game I’ve played since Karate Champ has been some variation of Street Fighter, Virtua Fighter, or Super Smash Bros. . Not so with Toribash. Playing the game has given me a whole new perspective on fighting games, and fighting in general. In Toribash, even scoring the most basic of attacks feels like a huge victory.

In that way, this is one of the most realistic fighting games ever made. You really need to learn how to fight from scratch. Nothing is spoon-fed to you. That makes the learning curve here atrocious. Get ready to not do anything right for at least your first three matches. At first it’s a little frustrating, but it makes it all the more satisfying when you eventually master some awesome attacks, just like in real fighting. Also like real fighting, there is no ceiling on how good you can get at the game. Even if you suck at the game, the violence is still really fun to watch. Decapitations and limb detachments are commonplace, but thanks to the game’s abstract visuals, they’re never disturbing. There are also a fair amount of character customization options in the game, just like in the Mac/PC version.

In a lot of ways, this is the exact same game you can play for free on the Mac/PC. Just like with the free version, the game is really meant to be played online, and the online here is smooth and reliable. You don’t really have to worry about lag in a turn based game like this, so slow wireless connections shouldn’t be a problem. The graphics look a little sharper on the Wii, and there is a little more music from what I can tell. All the various rule sets from the Mac/PC version are here as well (sumo, akido, etc), so that’s nice.

Unfortunately, it goes downhill from there. 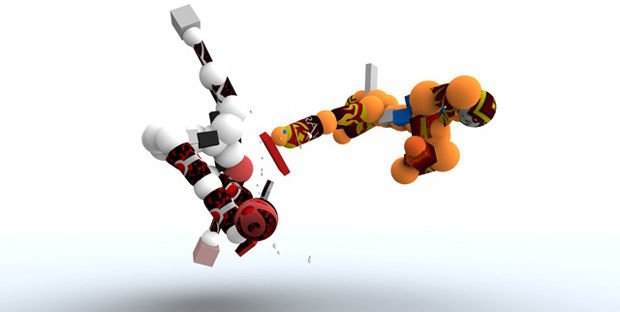 Maybe I haven’t played the game enough. Maybe in a week I’ll find that there is a lot more to this WiiWare port than I can see. If so, I’ll fix this review immediately. For now, I can tell you that there really aren’t any additional features to this $10 adaptation of a free game.

One thing I can say for sure is that the controls are worse. On the Mac/PC, you can select your body parts with the mouse, and control the camera with the keyboard. On WiiWare, you select body parts and control the camera with the nunchuck’s analog stick. It’s a mystifyingly bad decision. The Wii remote’s IR functionality is arguably the closest you can get to mouse-style controls on home consoles. Why Nabi studios elected to map body part selection to the slower, clunkier, more confusing analog stick is beyond me. If you haven’t played the game on the Mac/PC, you might not notice the difference, but if you’re  a fan of the original game, this purchasable port feels like a real downgrade.

Because this is on the Wii, there are no online lobbies to join. The game automatically matches you with another player. For me, that’s not a big deal. A random match is a random match, lobbies or not. I know a lot of you out there feel differently though, so I thought I’d mention it. The port also lacks all the mods available on the Mac/PC, though that may change over time. The Wii modding scene is capable of a lot of incredible stuff. 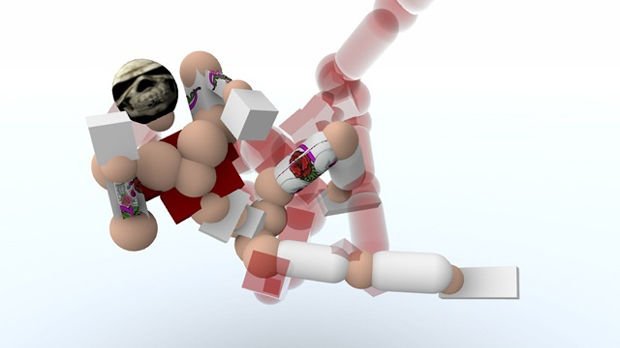 The only thing that I prefer about the Wii version of the game is that it allows for local multi-player. That’s something that’s strangely lacking from the Mac/PC build. It’s not enough to warrant a $10 purchase, but it’s something.

So yeah, this is awkward. I really like Toribash, but given that it’s a downgraded port of a free game, I’m not sure how to score it. It’s a really interesting experience no matter what platform you play it on, but there is no denying that it sucks to pay $10 for game that is arguably better and free of charge on Mac/PC. Then again, I can’t assume that just because you’re reading this, you even have a Mac/PC. A lot of you could be reading this on your Wii, or PS3, or iPhone, or any of those other newfangled doodads you kids are so fond of these days.

I guess I’ll say this — if you have a Mac/PC that’s powerful enough to run Toribash, subtract two points from the following score, and get rid of that “download it!” tag. For everyone else, the game gets a…

Score: 7.5 – Good (7s are solid games that definitely have an audience. Might lack replay value, could be too short or there are some hard-to-ignore faults, but the experience is fun.)