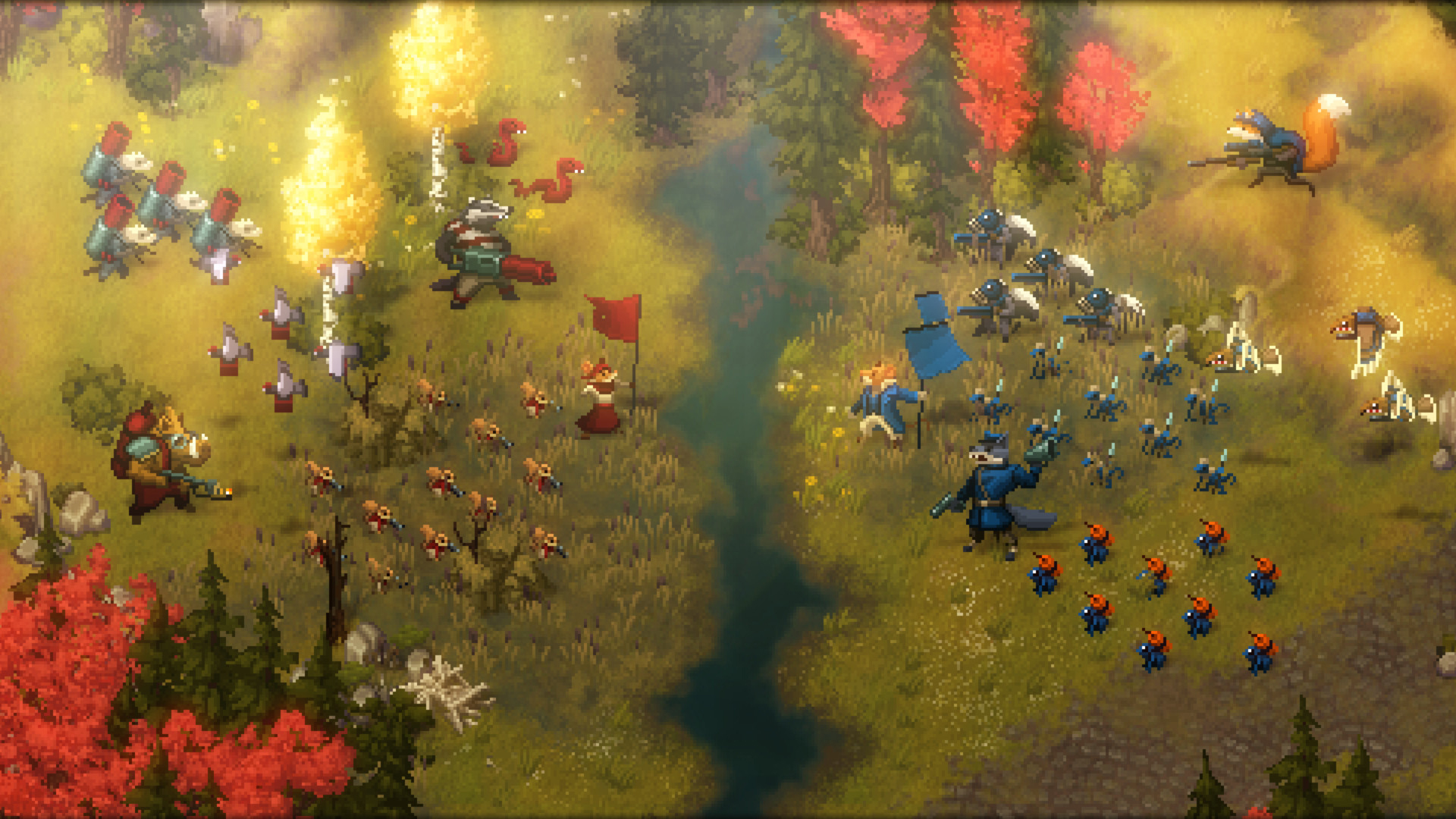 Have you ever played StarCraft on the N64? Of course you haven’t what a silly question. I have, and it is awful. That being said, the idea of playing a local multiplayer version of an amazing real-time strategy (RTS) game was too good of an idea to pass up. The biggest issue was trying to play such a demanding game on the controller. The fidelity simply wasn’t there.

Tooth and Tail takes this issue head on with outstanding success. It redesigns the traditional RTS format and ends up with a strategy game that feels right at home using a controller.

There is something very important to know right up front: Tooth and Tail has a significant story mode included and one could easily ignore all multiplayer aspects of the game and still have the game feel “worth it.” The story mode will take players around six to eight hours to complete, with plenty more coming for those who reach for the extra challenges in missions. There is plenty of content here for those who are not interested at all in the multiplayer but are interested in the game’s concepts and execution.

Best of all, this isn’t a simple case of every mission being multiplayer but with one or two caveats. Story mode missions are often completely unique and have entirely new mechanics thrown in at times. Each mission feels different from the last, and it’s all woven into a story of clashing ideals, political alliances, and government insurrection. The story expands between missions, as players control their character and interact with NPCs.

Every map is randomly generated, so players will have to learn how to beat the mission, not the map itself. This can lead to some clearly favorable maps, however, and it can feel as if you’ve “lucked out” from time to time when the map is generated kindly. This also leads to some frustrating avenues of movement, but luckily players can hold a button to burrow back to one of their bases to prevent running back and forth.

The story mode also acts as a tutorial of sorts, slowly introducing new units and strategies. Players switch between four different commanders during the course of the plot, and each one has their own followers, or units. It quickly becomes interesting to see the different ideologies from each commander and the morale of their followers. I can honestly say I haven’t enjoyed an RTS game’s story this much since the Command and Conquer games. The last mission, in particular, is something that made me grin from ear to ear; the history teacher in me was beaming.

These missions are hard, too. This isn’t “baby’s first RTS” game. The corkscrews that the missions send your way require critical thinking and planning. Plus, there are Heroic mission objectives that players can strive for — often requiring top-notch play to achieve. By the third act, I was regularly failing and retrying missions even without going for the Heroic objectives. Some missions did feel as if they almost needed multiple attempts to succeed at; I wasn’t always completely clear about how some objectives were achieved or how the new rules worked, exactly.

Mechanically, Tooth and Tail will feel comfortable to anyone with RTS experience. The biggest difference is that players don’t control some “eye in the sky,” clicking on UI elements and placing buildings where they please. Instead, they control a physical avatar in the world. This avatar cannot attack, but they can die. Think of them as a cursor; buildings will be placed at the avatar’s feet, and in order to issue an attack command, the avatar needs to be close to the desired target.

There’s also an economy to worry about. Focused on a single resource (food), players can construct Gristmills at certain locations around the map, which can then be surrounded by eight Farms that steadily rake in food. Every player starts with a Gristmill and some Farms and can expand from there as they see fit. When a player or team loses all of their Gristmills, it’s game over. Warrens are built to spawn units, whenever there’s enough food to do so. Balancing food and Warren production is key, and finding the right balance depends on your unit composition. Maps are randomly generated but relatively small, and matches tend to last no more than ten minutes.

Perhaps the most interesting concept is that each player chooses six units to head into battle with. There are four avatar characters, but they have no impact on gameplay. It’s the units that players bring into battle that make all the difference. There is so much to think about: how balanced do your want your units? How pricey should your units be? Do you want to bring any static defenses? Hero units? I love this aspect of the game because it forces players to have a gameplan before heading into the match. This has always been strong advice for any RTS player, and Tooth and Tail forces players’ hands by making them pick six of the available twenty units before entering the battle.

Since maps are randomly generated, the basic early game tends to play out the same way. Place down or queue a Farm immediately, then scout out the map with your avatar while taking note of the terrain, Gristmill locations, and of course, the enemy’s base. From there, it’s simply managing your economy how you see fit. Maybe you’ll take an early expansion or lead some early aggression, maybe just hang back and build up some Food storage. Since the matches are so short, even the “early game” tactics only last a minute or two, really. The speed of the game will take some getting used to, but once players adjust, it feels great.

Even if online matchmaking (ranked or unranked) isn’t your thing, there are plenty of offline options against AI bots. With six difficulties of AI, it’s easy to get the swing of things and start getting better. If someone doesn’t play the story mode, it will take some time to grasp all of the unit intricacies since the descriptions aren’t super helpful, but it will only take some experimenting offline to get acclimated.

The art direction does a great job of quickly letting the players differentiate units during battle. I did have an issue telling apart the red and green teams because the cones in my eyes are still on strike, but for the most part, this isn’t a problem. The hand-drawn art of the character portraits are likewise gorgeous and make the units feel more “alive.” The animations also deserve special praise. When characters are moving or warrens are being built, it’s nice and smooth.

The music is composed by Austin Wintory, who also worked with Pocketwatch Games on their previous work, Monaco. There are, at times, shades of Monaco within the soundtrack; fast-paced, often piano-heavy tunes carry the menus and many of the battles, while also utilizing what I can only describe as “bar chants” to give the game a more underground and revolutionary feel to it. Needless to say, the music excellently fits the overall theme of the game and I’ve been listening to the music the entire time while writing this.

It’s weird to say that Tooth and Tail takes what I loved about the N64’s version of StarCraft and actually makes it, well, enjoyable. Sitting on your couch playing an RTS with a friend is something that just didn’t happen until now. The best part is that this isn’t some newbie version of the RTS genre — this shit is hard. It requires a lot of the critical thinking skills that all RTS games do, but without the need for incredible APM (actions per minute) and dexterity. It rewards careful economy management and decisive planning over everything else.

I can easily recommend Tooth and Tail for anyone who enjoys the genre, even if you don’t care for multiplayer. The story mode is robust and greatly enjoyable, but the multiplayer still has all the bells and whistles that veterans expect by now like replays and post-match graphs. I hope that a strong community forms around Tooth and Tail because it has rekindled my love of RTS games.