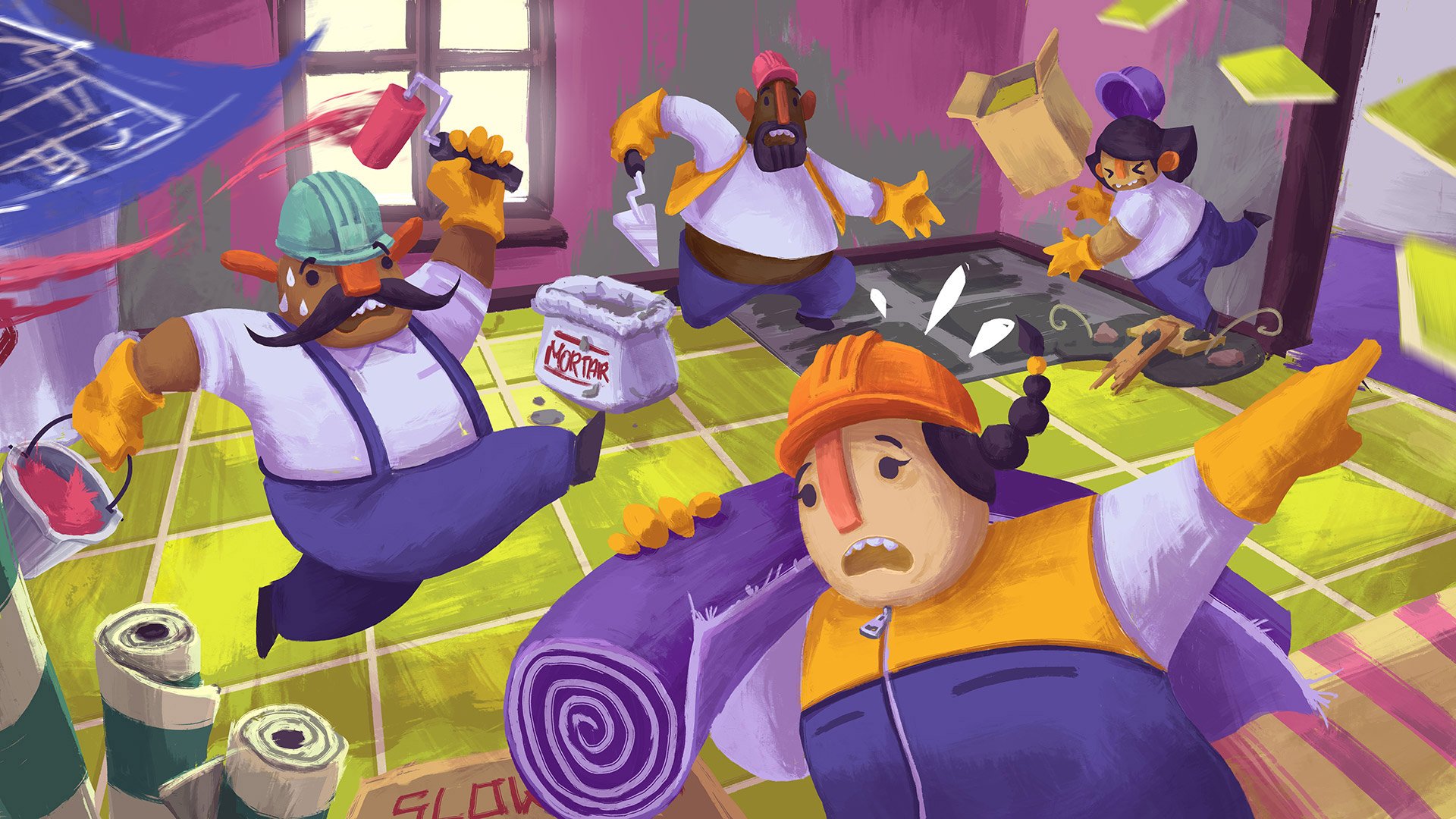 If I have time to kill on a lazy weekend and I come across a local co-op game in the style of Overcooked, chances are high I’m gonna want to take it for a whirl. That’s exactly how I fell into Tools Up, a team-building – and potentially friendship-wrecking – home renovation game for one to four players.

Tools Up is nowhere near as good as Overcooked, for a few reasons, but I don’t regret playing it at all.

There’s something so innately satisfying about laying down wallpaper and tiles, at least in low-stakes simplified video-game form. Grout, glue, and mortar are a mess to deal with in real life, and while the same can be said for Tools Up, that’s part of the fun of arcade party games. Plus, cleanup is a cinch.

Each of the 30 levels is a time trial of sorts – a several-minutes-long race to finish as much of a home-improvement work order as you possibly can in exchange for a one- to three-star rating at the end. While the clock ticks down, you’ll rush to pick up and read blueprints, figure out which room needs what done, grab supplies, and divvy up duties if you’re playing cooperatively (which is what I’d recommend).

A typical home might require new walls – either a particular style of wallpaper or shade of paint – and new carpeting. In both cases, you’ll likely need to rip out the old to make way for the new. You’ll tear everything up, toss it in a bucket, bring said bucket to the dumpster, and get to work. Except, you usually won’t have all your supplies right away (they’ll be delivered at random intervals by an impatient delivery guy who won’t wait around long), and you won’t know precisely what each finished room should look like without manually inspecting the blueprints to see a preview. Oh, and you can’t leave a mess.

Paint buckets will spill. Rolls of carpet won’t sit still. You can accidentally rip a door straight off its hinges. There’s no shortage of ways in which you or your pesky teammates can tear the place up. It’s not enough to finish a job to the homeowner’s specifications – you also have to leave it spotless. So even if you “win,” you aren’t getting the full three star-rating if you forget some supplies inside.

My favorite parts of Tools Up were the moments where tight quarters proved tricky; where we genuinely had to work together – either to run to the front door for an out-of-nowhere delivery, or to move heavy furniture out of each other’s way – rather than kind of just separately do our own thing.

I also love how flooring works. There’s a “cooldown” period after placing each segment of flooring that prevents anyone from walking over it – a slight wrinkle that requires planning and communication.

As you settle into Tools Up, you’ll probably expect to see new environmental themes, but there are just a couple, including slippery floors and lava pools. You’ll also probably expect the game to introduce fresh concepts over time to keep you on your toes, but aside from wall-busting demotion and bricklaying, there isn’t a whole lot else to discover. The levels have a strange meandering pace overall. For instance: the final mission? Not so bad! Definitely much easier than the random level in which a tiny dog terrorizes your group, blocking the path and knocking supplies over every step of the way.

To sum it up, there are hints of greatness. But just hints.

The actual act of playing Tools Up – while very simplistic – is enjoyable in the moment, and it’s particularity well-suited to families with a range of video game expertise. But it’s hard not to want more unique challenges, either with physical obstacles or more creatively demanding interior designs.

Tools Up doesn’t make the most of its clever co-op gaming concept, but I still had a decent enough time. I’ll be there day one if a sequel ever takes this home-renovation hook and runs wild with it.