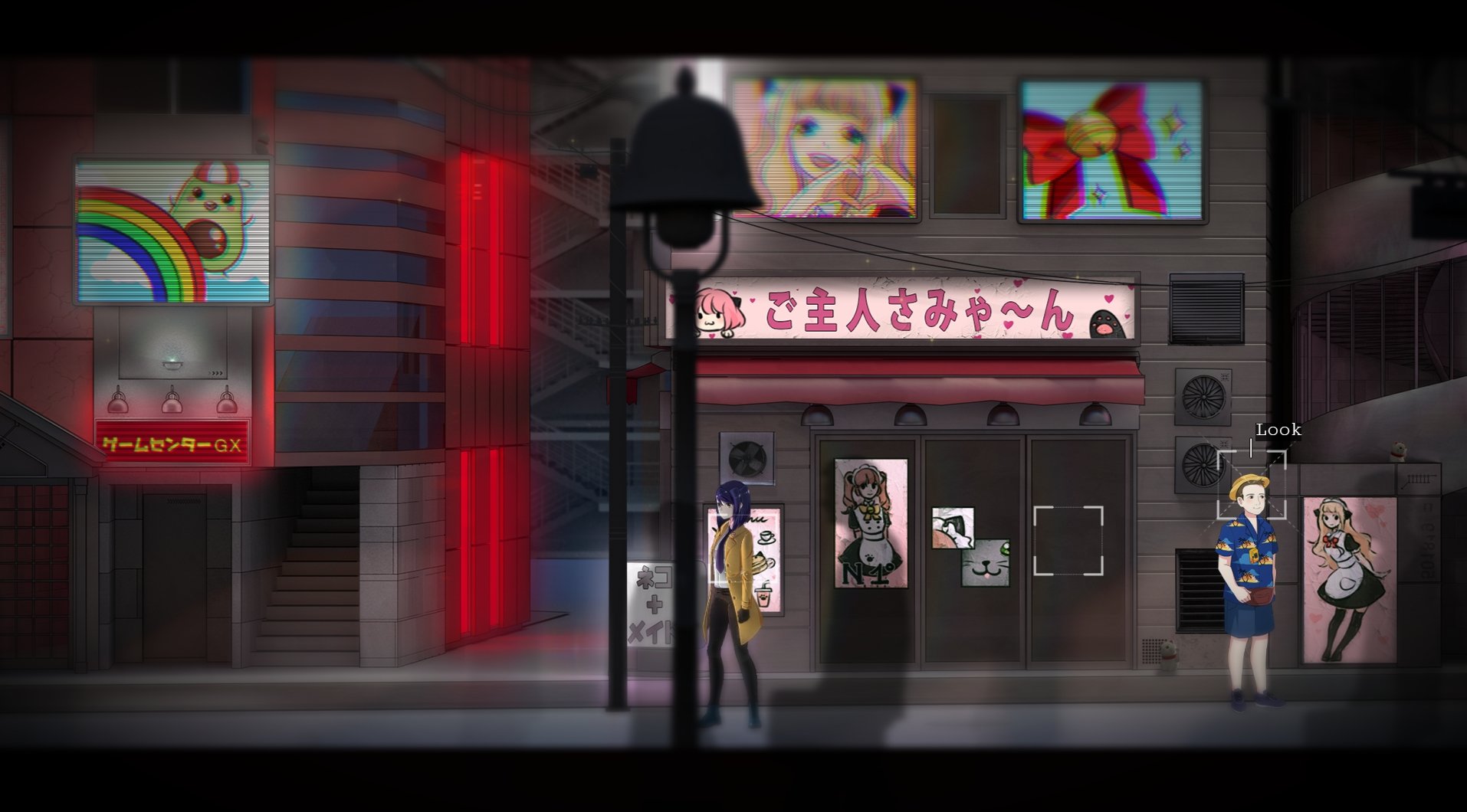 All the Dark and Doors you can ask for, without the pesky Disney friends

You’re looking at a nervous girl. She has a hostage and holds a knife in her hands. There’s a gun in yours. You’re the only character that isn’t in danger, but despite that the situation is as tense as it can get. The main character is never in real danger in a video game anyway. They have their destiny to fulfill.

Tokyo Dark isn’t the kind of point-and-click adventure that attempts to reinvent the wheel with its narrative. After reading the Telltale-like warning that your decisions impact the story, you’re greeted by a somewhat by-the-book supernatural investigation tale. You’re with the police. You’re searching for your missing partner, but the otherworldly forces at play are much larger than you both. That kind of story. But by mixing design elements of western and eastern games, as well as creating an effective atmosphere with its set pieces, Tokyo Dark managed to grab my attention nonetheless.

Before playing Tokyo Dark, I never thought about streamlining the point-and-click genre. After all, it’s already one of the most simple around. You first click on actions or inventory items, and then on the stuff in the environment you want to interact with, right? Well, like infomercials are trying to tell you, there is a better way! In this game, instead of having an inventory or a list of actions outside of the game world, decision wheels appear around things you can interact with. Click to walk around, click on sections of the wheels appearing on the world around you to do something. That’s it. There’s no longer any need to look for the precise pixel where you can grab a tiny object, or try every possible combination of items when you’re stuck! How cool is that?

But as a result of that streamlining, there wasn’t much in terms of puzzle solving either. What puzzles there are are few and far between, and easy to solve too. Thankfully, there are different ways of dealing with important situations as well. The decisions you make during your journey affect your S.P.I.N., a system tracking your sanity, professionalism, investigation, and neurosis. While it’s a bit peculiar that the first three statistics are beneficial and only the last one is harmful, it’s a neat idea on paper to make each action feel more important.

By the way, don’t look at the achievement list if you don’t want to spoil most of these branching decisions for yourself.

I had a fun, stressful time during my first playthrough of Tokyo Dark. The few jumpscares at the very beginning were thankfully not representative of the full game. Instead, tense situations raise the scary factor more organically. Frequent autosaves force you to think about the possible outcomes of what you’re doing, as there’s no going back. Unfortunately, the game loses that appeal during New Game+ for obvious reasons. On top of that, starting the game over after a first ending made me realize there just isn’t as much difference between the ways Ito’s story can unfold as I’d like. The classic Telltale problem.

Not all conversations you’ve already read can be skipped in New Game+, either. I’m not a fan of having to mash the left mouse button to skip text I’ve already read… Cherrymochi could have gone the extra mile by tracking your reading progress. Now, it may seem like criticizing a game for its handling of subsequent playthroughs is a bit nitpicky, but it’s important here because Tokyo Dark isn’t a particularly long game. Roughly six hours for your first ending, and later ones take much less time when you skip and mash your way through dialogue. That short length, and the post-credits scene that foreshadows New Game+, really gives you a good reason to chase other endings… Only to realize that they’re not much different from what you’ve already seen.

I guess the main issue with New Game+ is that it highlights the limited scope of the game. That’s not necessarily a bad thing. Knowing your limits is very important both with crowdfunded games and the first game of a new studio alike. But I do hope that if Cherrymochi makes another adventure game after this one, they’ll go for something bigger and more unique.

Still, I liked Tokyo Dark quite a bit, especially on my first playthrough. Quite a good show for a new studio. Tasteful presentation and a great sense of atmosphere manage to elevate it above the issues I had with the scope of the game. If you’re looking for something spooky to play during the Halloween season, you could definitely do worse. Like whatever new entry in an annual horror series is going to be announced and released in the span of two weeks when October arrives.