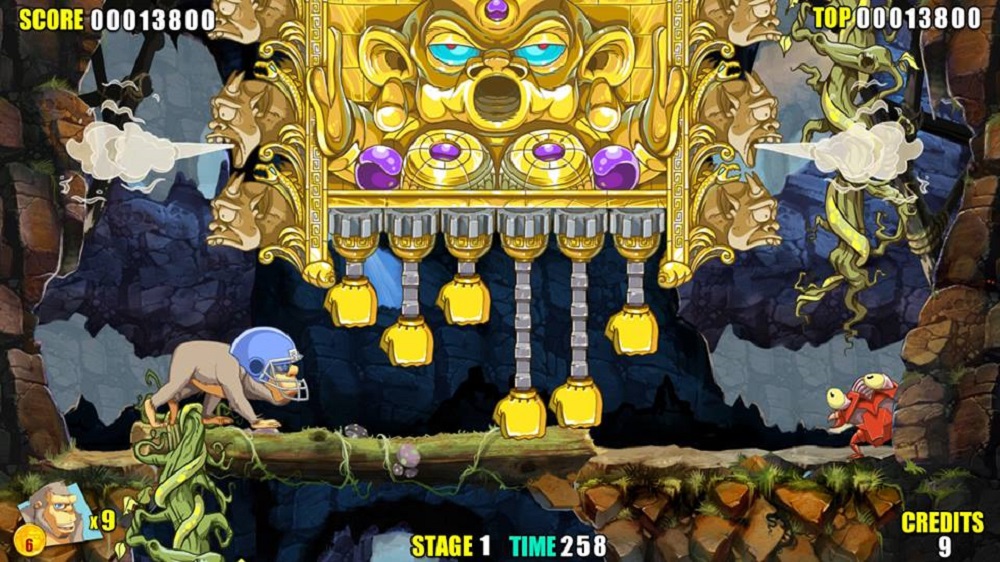 A gorgeous, but shallow, trip down memory lane

I think most people my age have a definitive arcade experience from growing up. We’ve all been there: You beg your mom for quarters at the pizza place, she eventually relents and fishes a few out of her purse, and you go do your best to make $1.25 feel like a million bucks. For most kids it was probably Street Fighter II or Mortal Kombat. You know, the heavy hitters in the arcade.

For me, it was Toki.

In most regards, Toki is your standard late ’80s/early ’90s video game. You play as a caveman who was turned into a monkey after his girlfriend was captured by an evil wizard. You shoot projectiles out of your mouth and do some light platforming around stages themed after jungles, frozen tundras, and volcanoes. It checks off basically every gaming bullet point from that time, from a nonsensical plot to cheap enemy and hazard placement meant to sap you of quarters until you’ve memorized the levels well enough to get through them.

Anyone who’s played a game made prior to 1996 should know exactly what to expect from the gameplay. You jump and shoot and avoid things, pick up power-ups to bolster your projectiles, don a helmet you make you less susceptible to attacks — it’s as standard as it gets. The good news, however, is that it works. The controls are solid, and even if you are tapping the A button on your Joy-Con as though it were an arcade cabinet button from 30 years ago the gameplay feels tight. When these types of games work, they really work.

For anyone who grew up with the arcade version like I did, the good news is this is virtually identical to the original. Enemy placement is mostly identical, levels flow in more or less the same exact way, and the mechanics all work as they did in the original release. Consider this the definitive version of the game.

The main draw to this (admittedly puzzling) remake is the visual design. The original game featured crisp graphics for its time, but the hand-drawn visuals for this remake are really something to behold. Graphic designer Philippe Dessoly has really made this game a pleasure to look at. Animations are fluid, characters are vibrant and varied, and overall it’s just a beautiful game to watch in action. The updated sound design is nice, but the sound effects of shooting your spitball drown most other things out. It’s to be expected, I guess, from a game featuring such a large amount of projectile combat, but it would have been nice to tone that particular noise down a bit.

While the game itself is still old-school arcade fun, where it falls short is features. Simply put, there are no extras in this at all. You can choose difficulties, which essentially just gives you fewer lives and continues as you increase the challenge…and that’s it. There are no art grabs, no history of the game — nothing. While it’s the definitive version of the game from a gameplay perspective, the developers disappointingly omitted any bonus features that might help flesh out the package. If you buy it, just know you’re getting the game and nothing else.

What is cool is the extra stuff in the GameStop-exclusive Retrollector Edition. You get a mini-comic fleshing out the story, a couple of prints from the game signed by the designer, a sticker sheet, and a really cool cardboard arcade cabinet holster for your Switch. If you’re a collector or just a fan of the game in general, you really owe it to yourself to drop the extra $20 to pick up all the cool physical goodies.

Toki isn’t a perfect game — hell, I’m not sure it’s even a great arcade game. But it really hit me in the nostalgia-feels. It’s a fantastic remake from a technical perspective, even if it’s totally lacking in extra features. If you like good old-fashioned arcade games, you can do a whole lot worse than this one. Just make sure you temper your expectations, as a lot has changed in the gaming landscape in the 30 years since its original release.