Indie game designers often like to depict themselves as rebels, talking out against the modern weapon war and race for realistic graphics being put on by the major game publishers of the world. From where I sit, it seems like they are rebelling against investing time in developing a strong visual style and fleshing out mechanics. It’s like these indie creators exist in a world where only singles and EPs exist; making an LP is just too ambitious and risky. But what is being truly independent without risk and ambition?

Here is where I tell you that Tiny & Big is a revelation and a game changer, rewriting every rule this medium has been built upon. This game would die on a cross for you. It has cured my uncle’s bleeding ulcers, renewed my aging pug’s libido, and given me enough money to fill up my parent’s swimming pool full of tapioca and swim in it.

Except, Tiny & Big is yet another example of a bite-sized indie game that doesn’t quite reach its potential. But, in contrast to other indie games, this one has confident, fully realized visuals, mechanics, and design. Like other indie games, it runs out ideas before its half-way point … an hour into the game.

Somehow the tides reversed: The 2D platformers of yesteryear came in vogue over the past decade, while 3D platformers largely fell out of favor. Before Nintendo and Ubisoft reimagined their flagship platformers in 2D, indie developers were paying tribute to their childhood favorites. Maybe, it’s once again up to indie developers to show the big leagues that there is still much to be accomplished in the 3D platformer. Tiny & Big is a prime example that there are still plenty of fun, untapped ideas that just wouldn’t work in 2D.

Wanting to be the one who wears the magical underpants on his head, Tiny chases after the awfully mean bully Big. Big likes to throw things at Tiny, using telekinesis. Tiny is pretty good at jumping, but that’s not enough to get through the crypts, canyons, and desert plains of his world. When a pillar and boulder isn’t standing in Tiny’s way, Big is there to toss one directly at Tiny. In all cases, Tiny survives by way of his tool set: a grappling hook, an infinite supply of rockets, and a laser beam that can cut through almost anything. 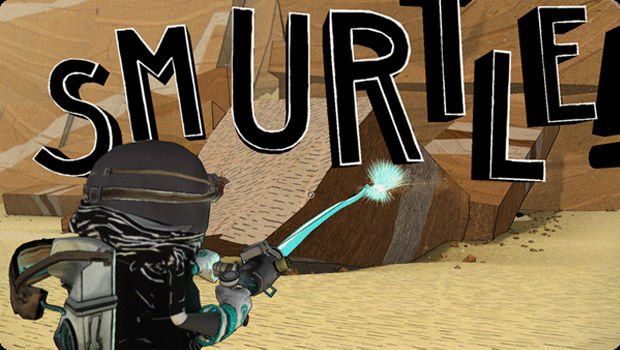 Tiny & Big always has a set path or two for you to progress to the end of the level on, but there is always room for making your own way (and ruining the set ones) with your arsenal. These paths are easy enough to spot on the first level. Look around and you’ll find a series of rocks leading to another area. The problem is that the first rock is much taller than the succeeding ones. This is where you slice it in half horizontally with your laser and grapple the top off, pulling it toward you. Now you’ve created a rocky, improvised staircase.

Things aren’t always so simple. Soon enough you’ll be traversing upward into the sky and downward into a chasm. You’ll need to cut pillars precisely to form makeshift bridges, fashion ramps out of objects with surgical precision, and cut down blocks 100 times your size. Running like a chicken with its head cut off as enough rubble to block out the sun falls down on you never gets old. While there is strategy to how you cut down objects, survival often comes down to getting lucky with the game’s physics. 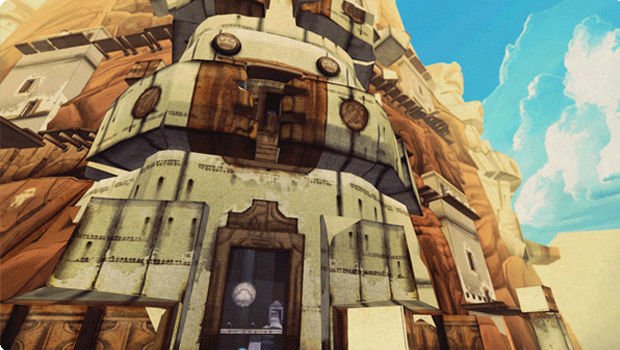 The controls feel great with a mouse. You cut objects with left mouse button, grapple them toward you with right mouse, and use middle mouse to fire a rocket, sending them flying away. The game’s loose jumps hold it back, as does the difficulty hike later in the game that requires a precision that Tiny & Big‘s physics and tools don’t easily allow. When you are walking along a suspended beam or trying to knock a box onto a small platform, you’ll wish the game was either a little more tightly designed or a little more forgiving. These instances are rare and only appear in the final hour of the game.

I’m not holding back any major plot revelations or details here. This really is all that Tiny & Big is about: One man-thing’s quest to retrieve magical underwear attached to some other man-thing’s head. Okay, sometimes there are mole-things that appear from the ground and are like, “What up?” Tiny & Big may be light on plot, but it makes up for it in charm. It has such a unique look, tone, and comedic style that makes the game a real joy to play, even when the going gets tough.

If Tiny & Big were a cartoon, it could easily occupy a time slot between Regular Show and Adventure Time. The character design, art direction, and offbeat European humor oozes personality and charm. Even when you repeatedly get crushed by a rock at the same location, it’s hard to get angry at a game that makes it so easy to smile. While I was tearing my hair out at Oniken, Tiny & Big always made me relax and sink into its cozy, simple world. 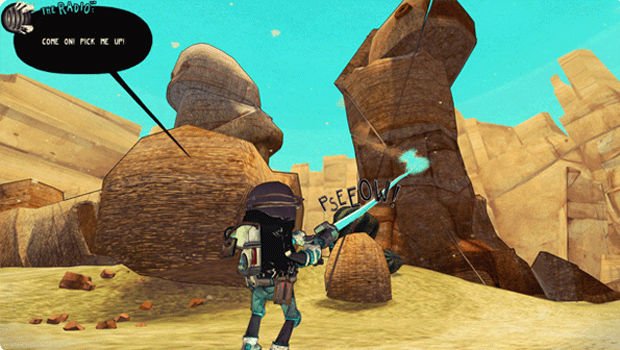 A special nod needs to be made for the game’s outstanding Tropicália-tinged soundtrack. The game’s six levels contain collectible tapes that unlock new songs in the game’s radio, which can mute and skip tracks. Collecting a tape was always a special moment, because every song was so damn good. These exotic, psychedelic songs go a long way in creating a particular mood for the game that is unlike anything else.

In many ways, Tiny & Big paints developer Black Pants as the German equivalent of Twisted Pixel. Much like their debut The Maw, Tiny & Big hints at a young studio full of talent, personality, and charm. Like The Maw, the characters of Tiny & Big may be made into plushies and sold by the dozen, but even that won’t keep the game from being anything more than a fun but slight platformer that comes shy of reaching its full potential. Here’s hoping that Black Studio is able to make an even more ambitious and outlandish project someday soon. They certainly have proven they are worth it with this charming debut.