Some games wear their influences on their sleeve; Timespinner has a full-body tattoo that reads “I ♥ Symphony of the Night” from the top of its head to the soles of its feet. That’s by no means a bad thing. Aspiring to one of the best 2D platformers ever made is a noble goal, and Timespinner comes closer to the mark than  almost anything I’ve ever seen.

About five years ago, I invited some friends over to hang out. We got to talking about upcoming indie games we were interested in, and one of them mentioned a couple of Kickstarters he was following. I remember distinctly that night was the first time I heard about Shovel Knight,and the other game that made an impression on me was Timespinner. Both projects launched in the wake of Double Fine Adventure‘s unprecedented Kickstarter windfall, when the gold rush for indie developers was well and truly on.

Five years later, Shovel Knight has taken the world by storm, with his own amiibo and a supporting role in the new version of Smash Bros. And I kept checking in on Timespinner‘s Kickstarter page every couple of months, just to see how things were progressing. I’m not sure if Timespinner will see the same success as Shovel Knight, but I can say it’s definitely been worth waiting for. 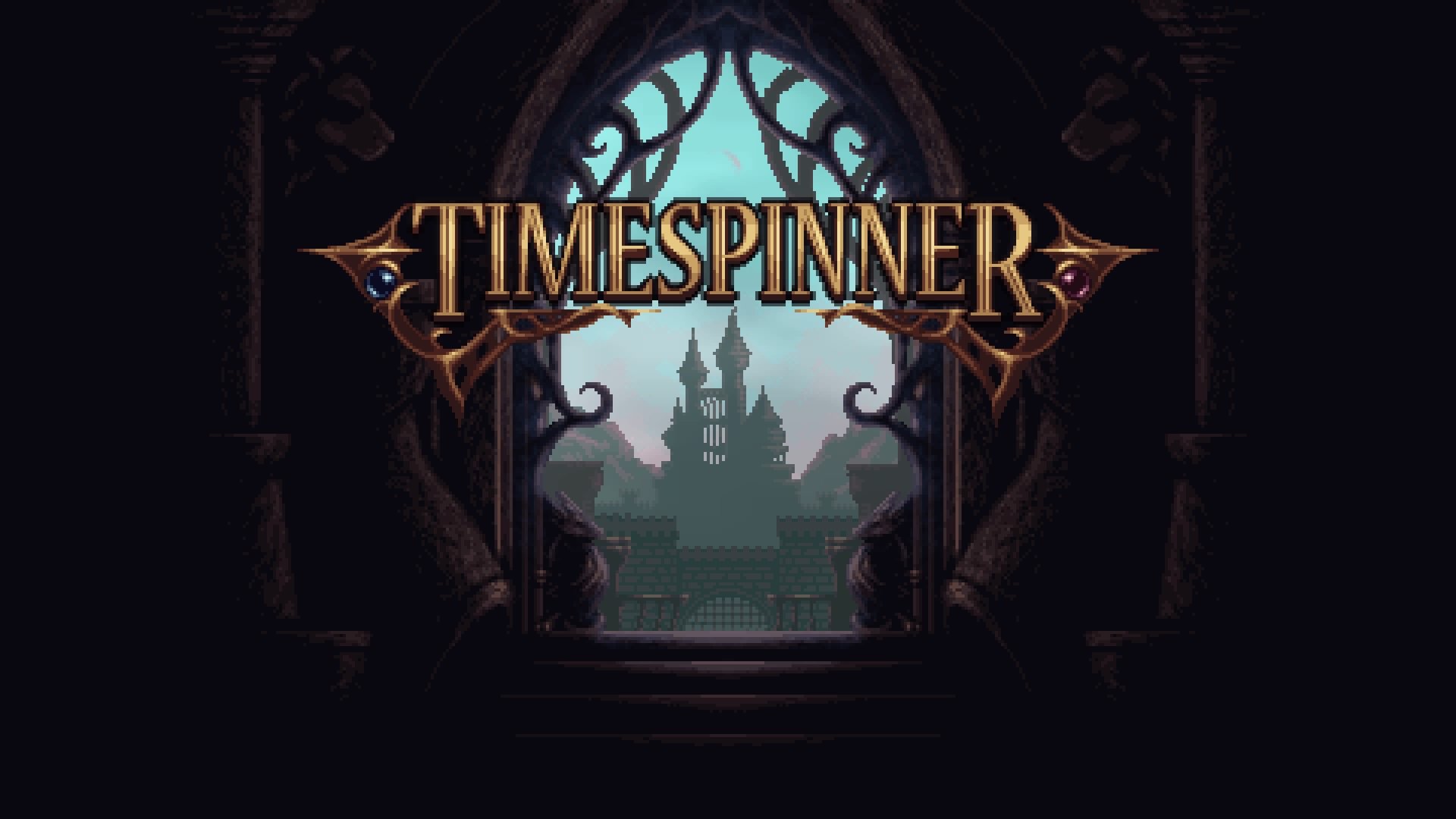 Timespinner does a fantastic job of borrowing the mechanics and feel of Castlevania: Symphony of the Night (SOTN) while still telling a fresh story and adding its own twists. Like Alucard, your heroine Lunais explores an interconnected 2D castle and the surrounding grounds, finding upgrades that help her move about more effectively. She has a dedicated backdash button and leaves a blurry afterimage when she moves, just like the vampiric scion of Dracula. Enemies have a chance to drop items when they die, and the odds are affected by your Luck stat. You can equip a familiar which will follow you around and fight on your behalf, and there’s even some patricidal themes later in the game once Lunais learns more about her origins.

While imitation is the sincerest form of flattery, Timespinner tells a much different story than SOTN. Lunais is a “Time Messenger,” one of her clan’s last line of defense against the Lachiem Empire. Time messengers can make use of the Timespinner, a machine which allows them to go back in time with a warning if disaster should befall them. This ability comes with a heavy cost, since the messengers are deleted from their own timeline and must adjust to a new life in the past once they step through the portal. The Empire is understandably interested in this technology, but Lunais’ clan has managed to stay one step ahead of them thanks to the sacrifices of the messengers.

As the story begins, Lunais is ready to celebrate the end of her training. Unfortunately, her services are required much sooner than she’d anticipated, as the Empire crashes her party without warning and rather violently. Her mother is killed right before her eyes, and Lunais swears revenge.

Timespinner has a spectacular pixel artstyle inspired by early 32-bit games like SOTN and Chrono Trigger, and everything on screen looks amazing. Lunais is extremely well animated, and I enjoyed the flourishes added to give her more personality, such as the spin she performs with every double-jump or her idle animation that lets her juggle her weapons. There’s a wide variety of environments and enemies, from knights and archers to animals and skeletal monstrosities. You’ll travel through caves, castles, and even a biomechanical research lab. Several screen-filling bosses make memorable appearances, and these showdowns will require good reflexes and a mastery of the game’s combat system. 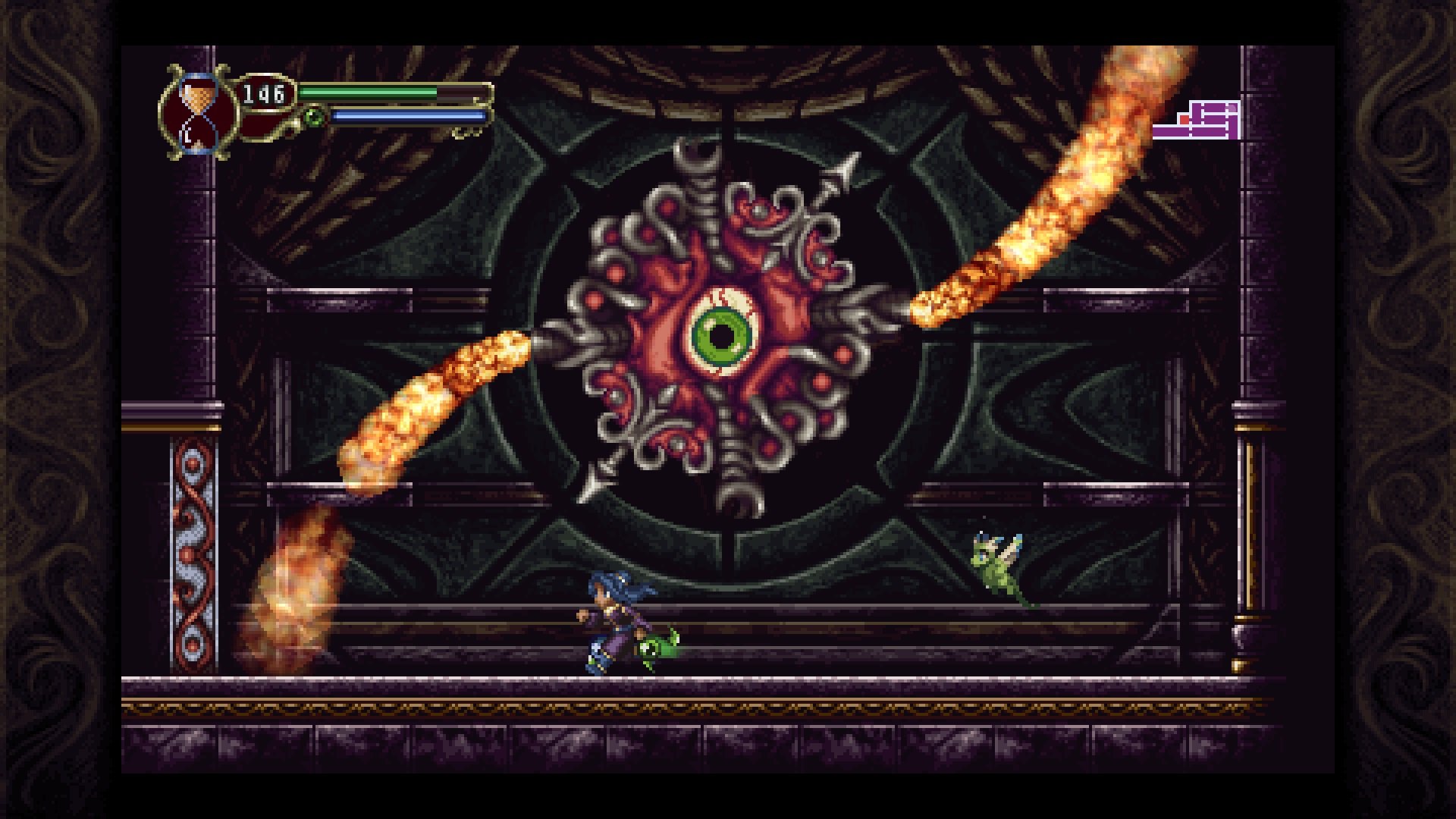 Speaking of combat, this is the biggest way in which Timespinner differs from SOTN. Instead of equipping a melee weapon, Lunais can fling several types of elemental orbs she’ll find on her travels. She can have two equipped at once, and they don’t have to match (though I kept mine in pairs because I just thought it looked cooler). Each type of orb flies with a different attack pattern, and each gains experience and attack power over time by being used.

Once an orb has been recovered you can also speak with an NPC to borrow some of its power for a ring or amulet, which can give Lunais special magical attacks or grant her passive bonuses. The special attacks require her to expend some of her aura, but this recovers slowly over time or fully along with her health whenever she uses a save room. With the right relic equipped, you can set up three loadouts of orbs and jewelry to swap between a few favorites or take advantage of an enemy’s elemental weakness. 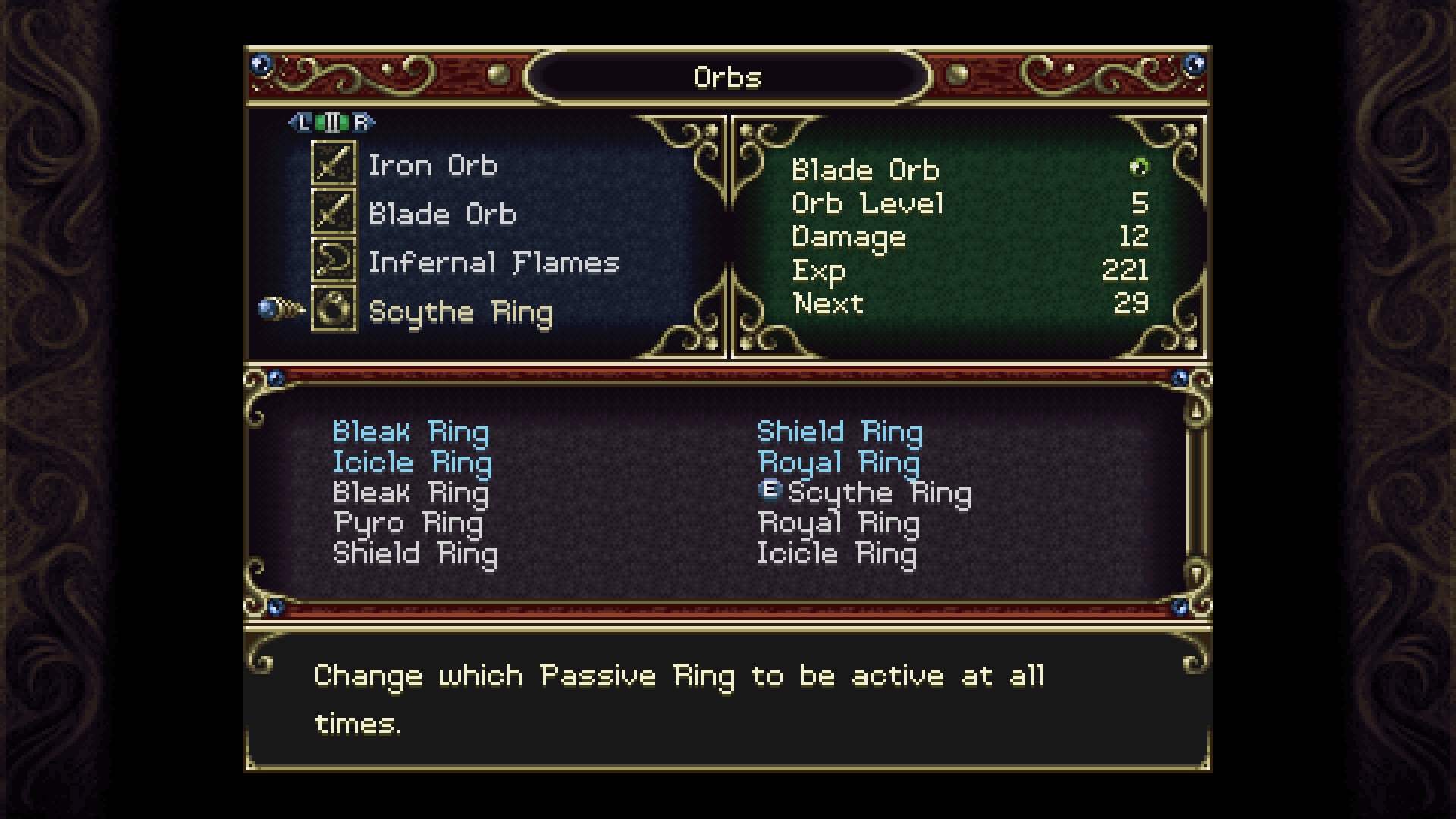 In addition to her orbs, Lunais can call on some of the abilities of the Timespinner, and one of the first functions she recovers is the ability to freeze enemies in place and use them as platforms. Freezing time also lets her move behind an enemy to strike at them while vulnerable, avoid incoming attacks, or just charge up a special move without worrying about being hit. Activating this ability requires magic sand, but fortunately this resource is easily collected from candles and other light sources, or can be earned by striking enemies. Lunais later discovers that she can warp between her own time and the same region 1000 years in the past, and some of the obstacles in her way can be dealt with by changing the timestream.

Not long after setting out Lunais discovers a baby dragon who will follow her around and attack enemies. If you have a second controller available, a friend can take control of this familiar to play through the game cooperatively. Some other familiars may join you on your travels, but most are very well hidden. Familiars can move freely about the screen, but can’t interact with the world beyond moving and attacking enemies. 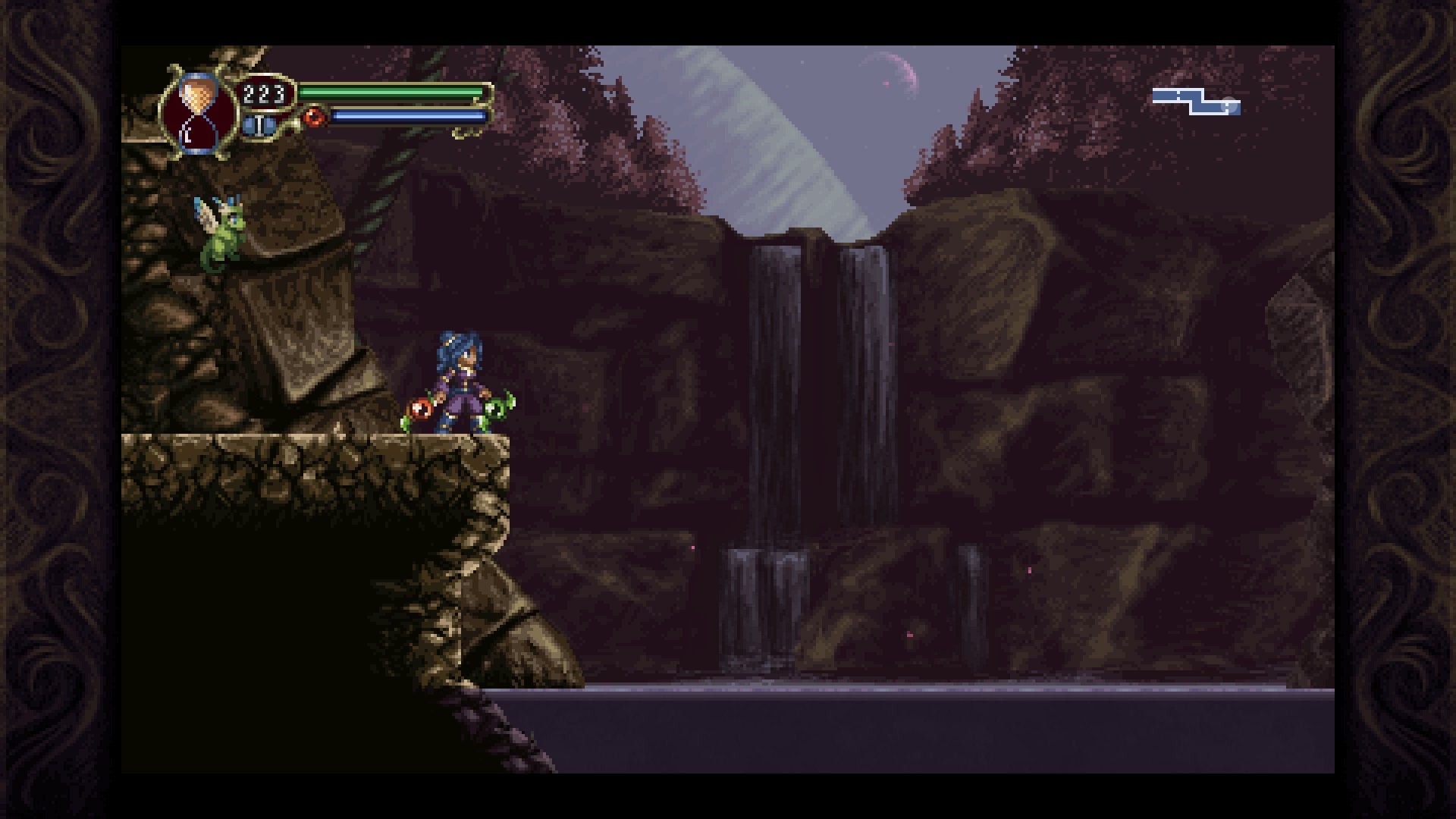 Once Lunais has explored a bit she can find some NPCs and bring them back to a hub area. Some of them will offer her quests to kill a certain number of enemies, find information about the future, or recover a lost item. I found it interesting that pretty much every important character in the game, from the protagonist to the NPCs, is LGBTQ. There’s even a sidequest where you help two male characters go on a date late in the game. Quests can be ignored if you’re in a hurry, but do provide a decent amount of currency or some bonus items when completed.

And you might be in a hurry if you’re into speedruns. Just like the games that inspired it, Timespinner lends itself well to shaving seconds off your best time. Unlike Chasm there’s no randomization to the map, so it should be possible to perfect a run and show off your skills. I expect some maniac will have posted a run under an hour by the end of the week, but my first trip through took about 10.

Once you complete the story for the first time, a couple of extra options unlock. First and most welcome is a New Game + mode that lets you keep most of your upgrades and experience, including a move speed boost. Most of the other movement abilities must be earned again, but your items, equipment and any experience your character, familiar, and orbs have accumulated will carry over. I was a little disappointed to see that starting a New Game + will overwrite your initial save file, and the items that allow you to upgrade your orbs without fighting are lost. 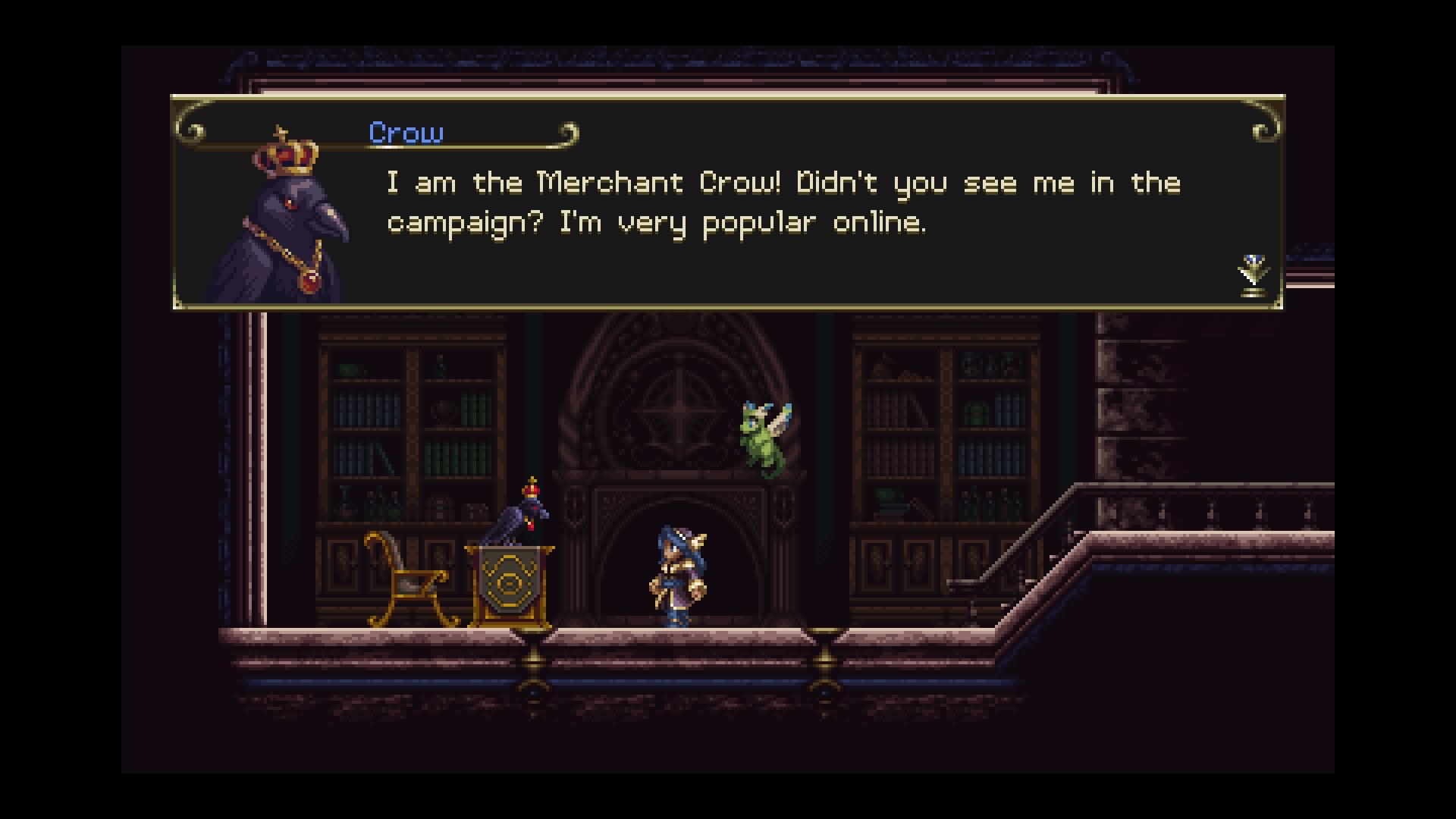 Beyond New Game +, you also earn the most challenging difficulty setting, which adds an additional restriction to hard mode. In Nightmare + mode, Lunais can’t gain any levels and is much more dependent on her equipment. No matter what difficulty you play at, there’s plenty of hidden lore and gear to collect, and there are several  possible endings depending on your actions, some of which allow access to a nifty bonus dungeon with some optional superbosses.

Jeff Ball’s work on the soundtrack deserves a mention, as the music does a great job of bringing to mind Michiru Yamane’s eclectic mix from SOTN. Just like the 1997 classic, Timespinner‘s soundtrack includes several different types of music ranging from thrash metal to harpsichord chamber arrangements, and it all works surprisingly well in the context of the game. Timespinner might even have the advantage in this department, since there’s no embarrassing “I am the Wind” track with cheesy vocals to bring it down. I found myself humming some of the songs hours after I stopped playing, and hope there’s an option to buy the soundtrack when the full game is released. 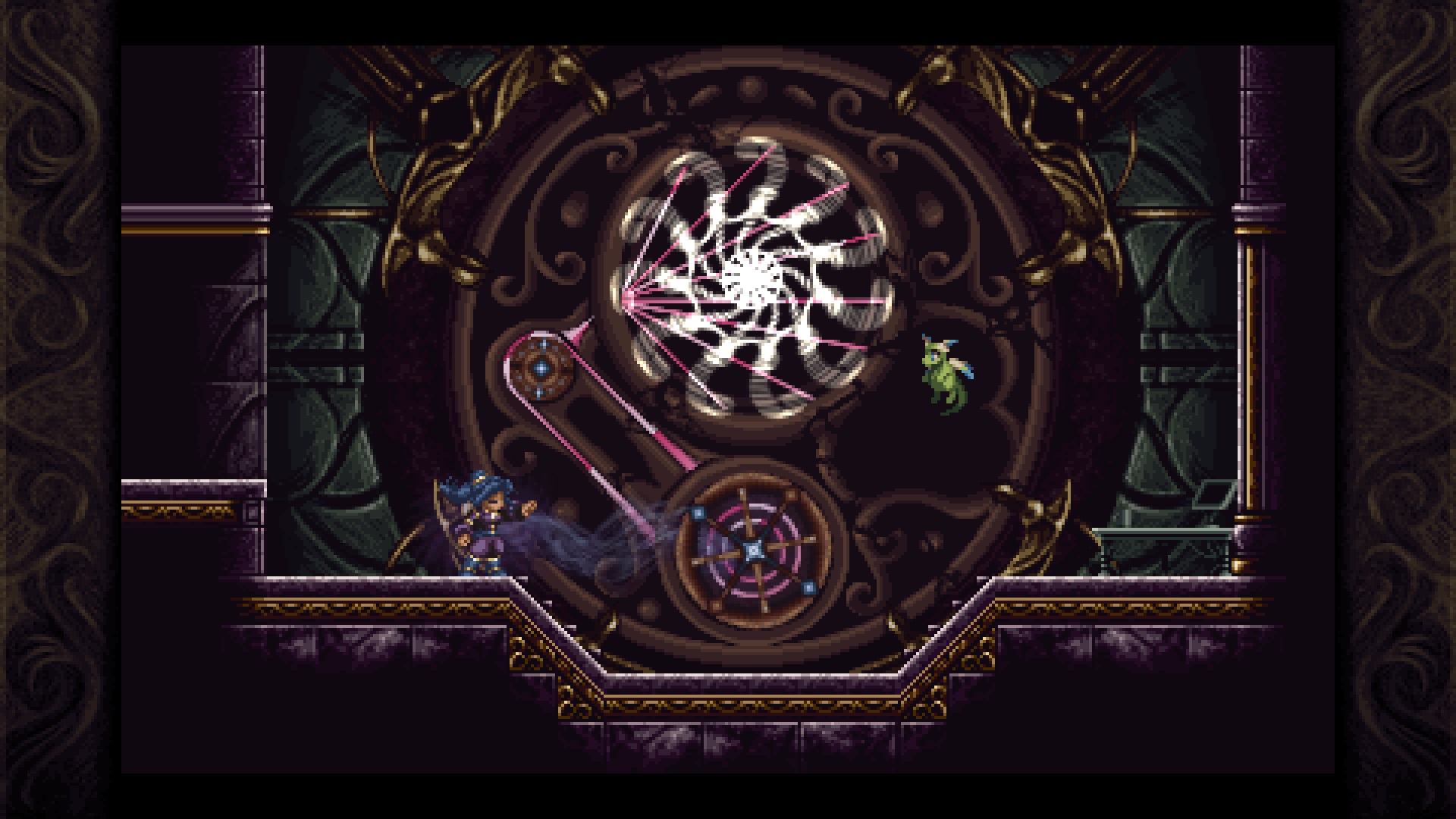 Even though Timespinner set out to imitate SOTN, it managed to find its own identity during its long development. It’s not quite as deep as its inspiration and it won’t take as long to finish, but I thoroughly enjoyed every minute I was playing. There’s been no shortage of quality indie games inspired by Super Metroid and Castlevania recently, but in my opinion Timespinner stands out as one of the best. If you’ve ever enjoyed Symphony of the Night or one of the many games it’s inspired over the last 20 years, you’ll have a great time with Timespinner.