WayForward has stuck to doing what it does best — platformers — for most of its career. But every so often it branches off and does something a bit different, like Silent Hill: Book of Memories, and now, Til Morning’s Light.

As an odd mix of Luigi’s Mansion filled with rhythm-based combat, it mostly works. 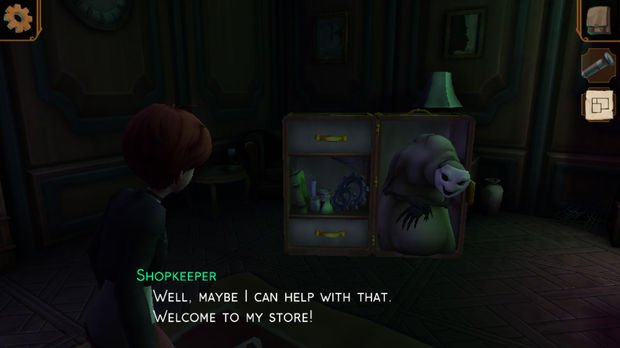 At the start of the tale, Til Morning’s Light feels like it’s going to be a typical teenage adventure, with two “popular” girls and an outcast — otherwise known as our hero, Erica. After being made fun of as a potential fan fiction writer, she’s pushed into an abandoned mansion, and the door is boarded up behind her. Those are some pretty sick bullies! It gets even sicker when she realizes that the mansion isn’t abandoned after all, and is actually inhabited by ghosts and gross insect-like creatures. Cue the Luigi’s Mansion parallels.

Armed with only a flashlight out of the gate, Erica will roam about, discovering the secrets of the mansion, filling in various bits and pieces as she goes. She’ll go about this by wandering around, which is accomplished by simply holding the screen and moving towards a direction, or tapping where you want to go. Whatever feelings you may have towards touch controls, let me just say, they work wonderfully here.

In fact, the entire game is filled with fairly inoffensive touch gimmicks, like rotating pieces of paper around to find more hints (a la Resident Evil), or flicking the screen to search pantries and the like. The whole affair is built upon a really fun atmosphere, as the characters (ghosts, mostly) you meet all have personality, and for the most part, are likable. Their personalities lack depth and the character building is pretty light fare, but it feels more akin to a Saturday morning cartoon, which a lot of potential players will dig. 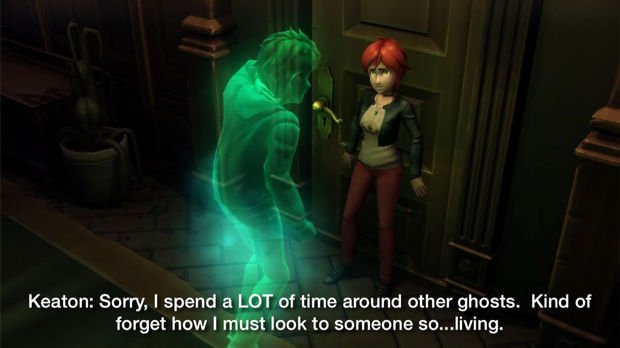 Erica jokes about there being a lot of keys to sift through though, but there’s plenty of truth to it. You’ll embark upon plenty of fetch quests, with a healthy mix of box puzzles (evoking more Resident Evil parallels) and basic problem-solving. For instance, one old-timey picture has a timestamp on it, which clues you in to the placement of the hour, minute, and second-hands on a nearby clock. If you find yourself stumped, you can pick up coins along the way, which can purchase hints, as well as items from an in-game store.

Combat is another big part of the game, taking place on a rhythm-like stage. It’s a lot like Elite Beat Agents (but less engaging), starting off with timed taps on the screen, then swipes, and so on. I like the idea in theory, but there’s a lot of enemies to fight in the game, and since the battle system isn’t super deep, it can occasionally feel tedious. It can get really tough even early on, and as the game states after booting it up, you’ll probably want to use headphones.

While the mansion isn’t exactly open-ended and tends to be a tad too linear at times, you eventually will make your way to more interesting areas — like the greenhouse wing, which features plenty of holes to dig up for hidden items. It’s at this point in the adventure that you’ll also unlock the Spectral Phone, which can spot hidden spirits in the wild, with 20 in all to find. That’s about as deep as the exploration-angle gets, but it thankfully never gets to the point where it’s straight-up dull. Think of a wheel with only one or two spokes on it, and you’ll have an idea of what to expect. 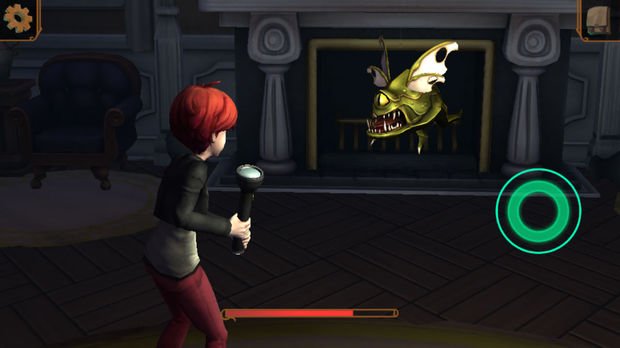 Til Morning’s Light never really goes the full mile with any of its concepts, but they all mesh well together and the presentation is enjoyable enough. I don’t think it’s going to make headlines or change the horror game in any way, but it’s a fun way to spend an afternoon and another respectable showing for Amazon’s game division.