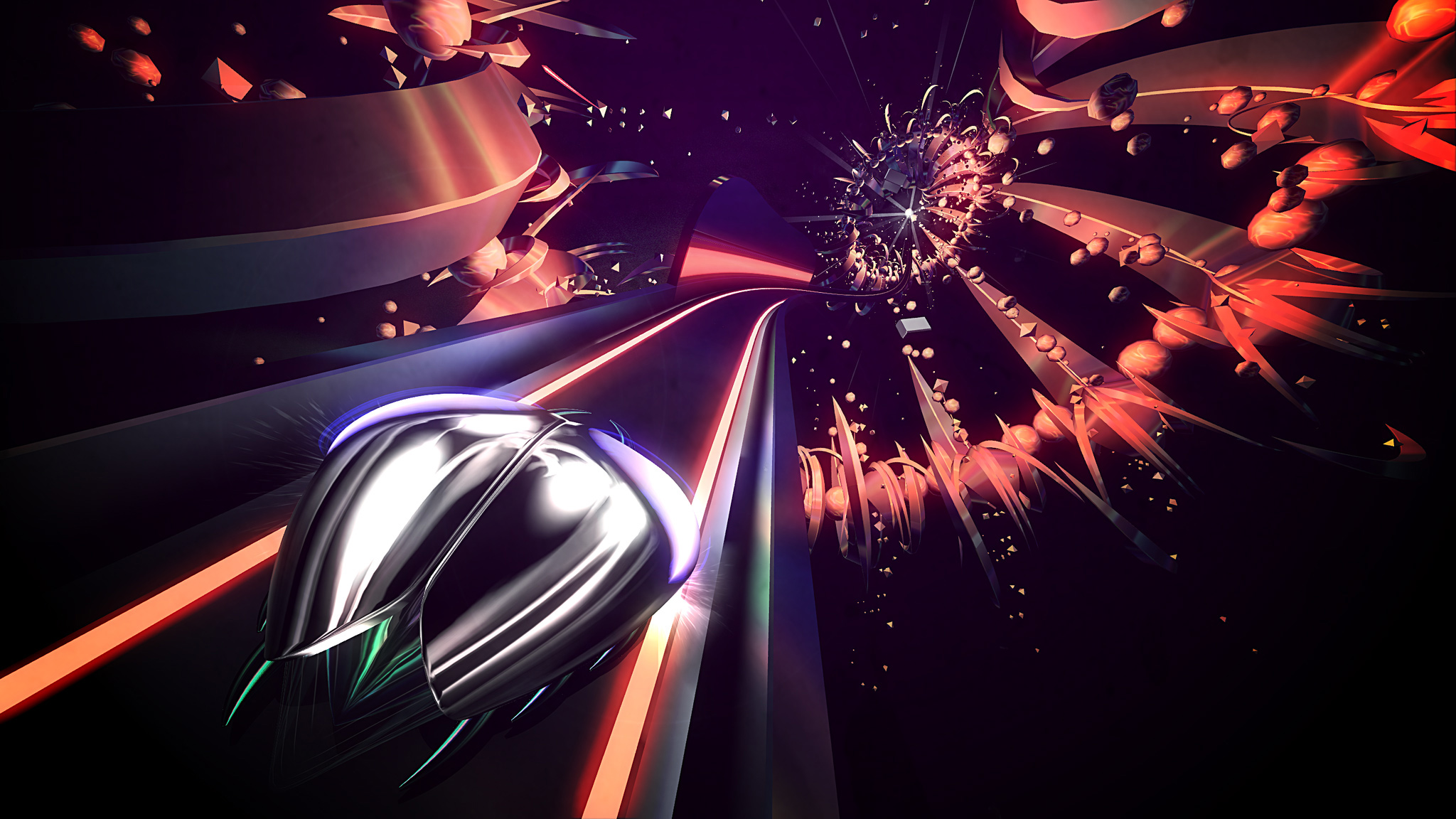 “You are a space beetle. Brave the hellish void and confront a maniacal giant head from the future.”

Ever since hearing this strange summary or some earlier iteration of it years ago, I have been on board with Thumper. The unnerving rhythm-action title is the work of a pair of former Rock Band developers, now at their own independent studio, Drool, and it is a remarkable game indeed. 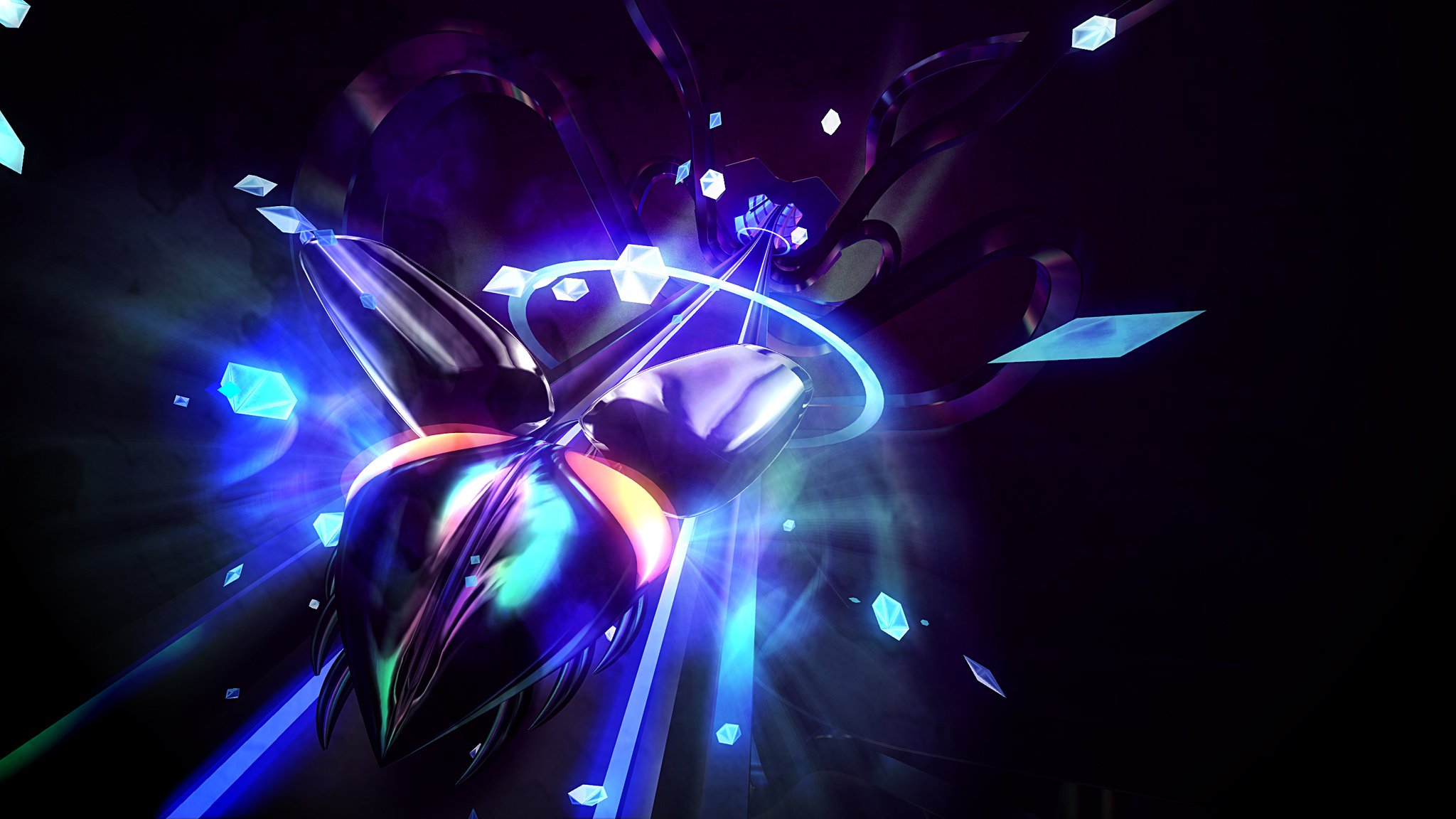 The way Thumper feels is not easily described. But, surface-level mechanics? Sure, let’s start there. You are, in fact, a space beetle, one who is unfortunately (or maybe fortunately?) hurtling at high speeds across a winding hellscape. And, yes, sometimes there’s a demonic head blocking the path forward.

Using only simple directional controls and a single action button, you’ll smash down on “thumps” littered across the track, make horribly sharp turns left or right, hover over spikes, and hunker down to bust through oncoming hurdles. There are a few other later-game concepts to pick up like multiple lanes or advanced combo techniques, but that’s it for the most part. These interactive elements produce sounds that, altogether, form this mildly unsettling and weirdly intoxicating percussive music.

Considering all the musical elements, this is less a traditional rhythm experience and more a stripped-down, fast-reflex arcade game of trying your damnedest not to die. (And, with mastery, it’s a game of risking your neck at every opportunity to earn bonus points for a leaderboard-shattering high score.) While it might seem comparable to something like Amplitude at first glance, that line of thought fades before long.

Even playing on a standard television screen, with a decent pair of headphones, there’s this undeniable physicality to Thumper. You can feel every wall-scrape and beat smash, every single bit of commotion, and it all reverberates through your soul. It’s intense. Genuinely intense. I don’t mean in a typical “Thank eff I made it through that hard part!” way. It’s more like “Holy shit, after that, I couldn’t play another level even if I wanted to. I’m just drained. And now I’m going to bed.”

That’s a good thing! (I think.) I can’t recall the last game to make me feel this way. It can be frustrating, but it’s also a special kind of satisfying. Opening levels aside, you have to practice, improve, and fire on every last cylinder to progress. That’s most true with the boss sequences, where you’re stuck in infinitely repeating loops until you can (essentially) perfect a rhythmic run to move on.

I don’t yet have a PlayStation VR — which Thumper optionally supports — so I can’t speak to what it’s like to play with that extra layer of immersion, but I am both scared and excited to try it soon. The last third of the game, especially, might be too overwhelming for me. Or perhaps I’ll find it easier to “stay in the zone,” as it were. To do well here is to avoid consciously thinking about how you’re playing or trying to predict the next obstacle coming down the line. Every time I did that, I lost focus. Once you lose focus, you lose control. 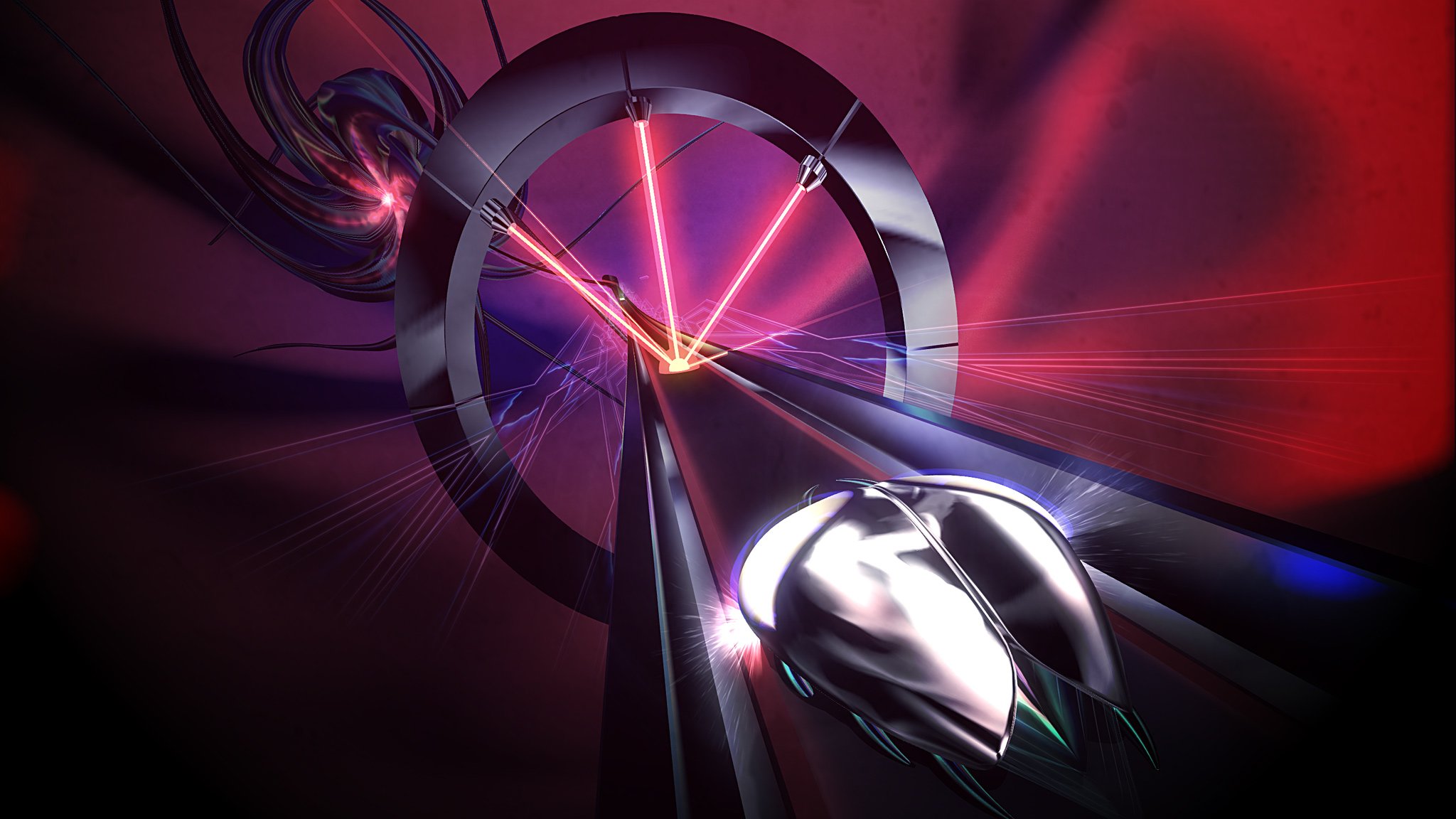 As much as I like Thumper — for its originality, for its foreboding mood, for its exceptional art direction and tight controls — it is not without faults. That such a small team was able to come up with this concept is impressive. I can’t stress that enough, and I’m happy to see it isn’t going overlooked.

But after a certain point, it became too difficult, too fast, with too few new ideas, and my enjoyment eroded. Part of that stems from the length because this is a surprisingly (and unnecessarily) long game. I found it to be at its best when I was just scraping by but still clearing most of the sequences on the first few tries — approximately until stage six or seven of nine. Further in, the levels felt less intuitive and readable, and more tough for the sake of it. I’m sure some people will have a grand time getting good enough to master the entire game, and I wish them luck. I’ve learned that pursuit isn’t for me.

I’d still recommend Thumper, though. Readily. But I would also advise not to get too wrapped up in fully finishing it. This road is long and winding and brutal. It might just drive you mad.