Here’s a little indie game that caught my eye the other day. It was made in 11 hours during the ‘360 iDev GameJam‘ and later found its way to Kongregate and the Apple app store.

As cheap little iOS games go, Three Trees is one of those games that look deceptively simple but end up eating a lot of your time. Whether or not it’s going to be on your iThing forever is a tough call to make, but there’s some fun design to play around with for quite some time.

The design of Three Trees is all about managing three panels for as long as possible by sliding around three different elements. Each panel each has a tree and soil that are affected in different ways depending on the element’s benefits and drawbacks.

A panel’s tree will grow when it receives Water, which also enriches the soil and slowly fills the panel with blue water bars that drop down over time. To get rid of the blue bars you can use Sun to evaporate the water bars, but doing so will also make yellow ‘dust’ bars drop down. To get rid of those yellow bars, you can use Wind but that also withers your tree and makes the soil dry out.

If any panel is filled with yellow or blue bars, or if the soil dries out entirely, it’s game over. Sounds easy? It kind of is, and the rock-paper-scissors design is very simple yet deep enough to keep you playing. In a nutshell, you just slide the elements around across the three panels to survive for as long as possible, which can be harder than it sounds.

After a couple of tries, where you die because you keep forgetting that wind doesn’t just get rid of yellow sun bars but also dries out the land, you start to get the hang of it. And after five games or so, you start to get better and better at it. 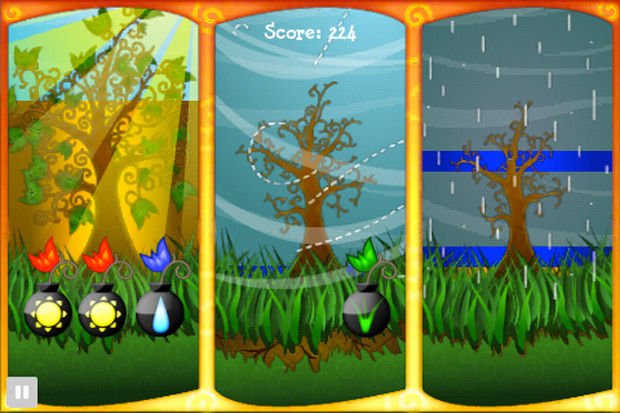 Over time each panel will also get up to three water, sun, or soil ‘items’ that you can use to clear specific negative effects across all three panels. After playing Three Trees for a while, you’ll find yourself saving up these items to do things like just letting one panel nearly fill up with Sun and then clearing with an item when it’s nearly full.

What makes Three Trees fun is that the slide-juggling mechanic in itself is a fun way of using touch controls for any type of player, and the effects of each element will start to add up faster and faster. If you can make it a few minutes in, you’ll be swapping panels like crazy and will start hoping for more items to appear at the last moment. Something that also makes you keep retrying is the global high score that is smacked in your face when you go game over; one that doesn’t seem unattainable but feels only just out of reach.

Trying to grow your tree to the maximum attainable size also has a strangely addictive effect on you. You want to use as much rain as possible so you can see your little tree grow and blossom. But while doing that, your other two tree panels will either dry out or get filled with sun bars. And by managing those two other panels just so you don’t die, you’ll inevitably have to wither your big tree with the Wind element. 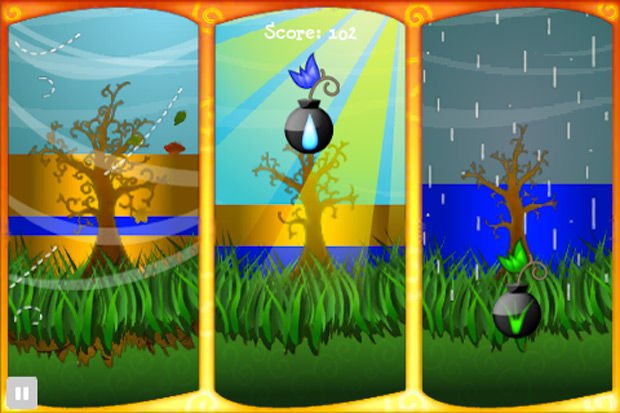 If you’re lucky, you can keep Water on a tree for a long time by just using the items to clear negative effects of the elements. However, the game doesn’t really provide any good feedback on when you’ll receive an item power-up, which makes it hard to plan around it. More often than not you’ll save them up (a maximum of three per panel) and end up not using them until the end, or you’ll use them just because you reached the maximum amount.

And while the game is fun to play, there is only one mode to play. You have the three panels to manage, the personal goal of fully growing a tree, and that’s it. The high score element makes it a lot more addictive, so it’s great that they implemented it the way they did, but it only goes so far in terms of longevity.

The controls are simple enough if you slide a panel’s element to the left or right, but you can also tap the panels which doesn’t work quite as well. You never know exactly where a panel you tap will go at any time, and it feels like it was designed for sliding rather than tapping.

Still, it’s a cheap little game that you can either play for a few minutes or spend half an hour on to beat your high score. If you have friends on OpenFeint or Game Center, you can probably add some longevity to the game by getting a little competition going. And if you have small kids and an iPad, it makes for a nice way to teach them about the elements while they have fun for a couple of minutes.

For the price and the design, it’s really worth checking out. On a Retina display, the graphics are clean and simple, although they don’t appear to be specifically made for it. It’s not the most complex or expansive $1 game out there, but it’s different and fun enough to give it a shot. More likely than not, you’ll find yourself playing multiple games in a row just to improve your highscore.