Thomas Was Alone contains a lengthy narrative, a colorful and varied cast, and a story of cooperation, conflict, and epic questing. It meditates on sentience, love, friendship, loss, rivalry, and the basics of beginning a superheroic career. It packs into itself more heart, character, and drama than many triple-A titles.

That’s quite a lot for a game that looks initially like an Adobe Flash object-creation tutorial, starring a series of colored quadrilaterals. 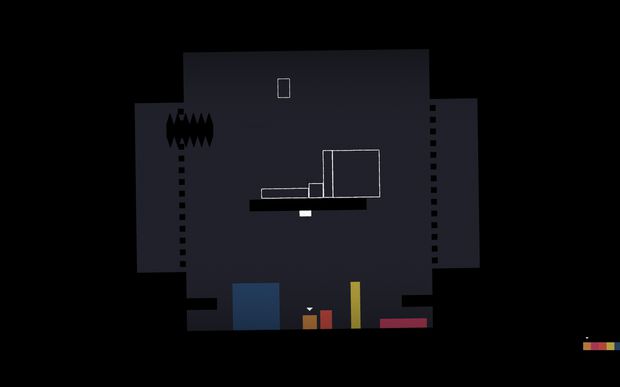 Thomas Was Alone is not by any means a mechanically complex game. Controls consist of moving and jumping, and not much more. If not for its unique storytelling hook and endearing characters — an achievement not to be understated, mind you — the game would be otherwise indistinguishable from the glut of indie puzzle-platformers that make up much of the scene.

Complexity rears its head in the game’s party of rectangular adventurers. Each has unique characteristics, speed, jumping height, and occasionally special gimmicks. The red one can jump high and move fast, but is just the right size for the weaker jumpers to vault. The tall yellow one can jump really high, perfect for reaching far-off switches. The blue one can float in water, ferrying the rest majestically over deadly pools. The pink horizontal one can barely hop, but can serve as a trampoline, boosting everyone else’s airtime. And so on.

As such, the game’s all about building stairs and cooperation, each piece helping each other piece make it to appropriately shaped portals to move on to the next of one hundred total levels, divided into ten chapters. Players hoping for a more rigorous mental workout may be disappointed, for most of the game’s puzzles are a bit too simple to engage fully (a couple of exceptions aside). As the cast grows, players may end up traversing an area multiple times, which can annoy folks looking just to get to the next bit of story. A level-select or way to skip puzzles after several failures would be welcome. 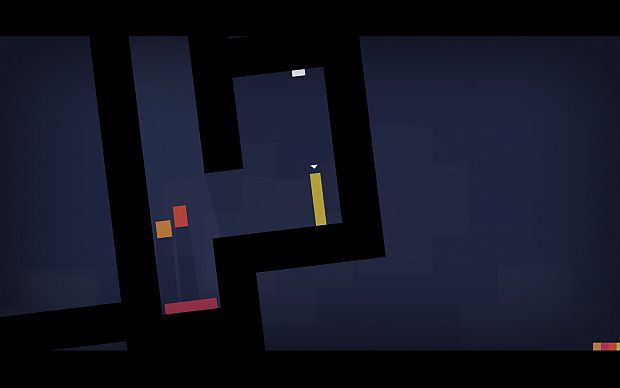 When I mentioned that the game looks at first glance like a Flash title, that shouldn’t surprise; it began life as a Flash game. It’s now powered by the Unity engine, but curves are still nowhere to be found. Levels are constructed of plain black shapes, and every character is a square or rectangle of some sort, distinguished only by shape, size, and color. 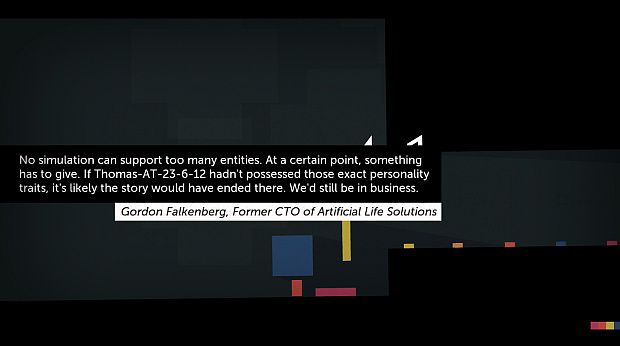 This all helps to enhance the game’s true star: its brilliantly-written story and unique approach to storytelling. Told through plummy-voiced narration by Danny Wallace (who voiced Assassin’s Creed II’s Shaun), the game weaves a tale loaded with charm and personality, and manages the feat of giving heaps of character to simple mute, barely animate shapes.

As you play, you’ll start to think of each little block as a person, with a name, history, and attitude. Thomas’ irrepressible positivity, John’s ego (as big as he is tall), squat Chris’ constant whining and cynicism (a trait that’s touchingly tempered by a first romance), and Claire’s burgeoning superhero complex (because she’s waterproof!) endears and inspires emotional investment amidst a backdrop of artificial intelligence and the travails of newborn sentience. 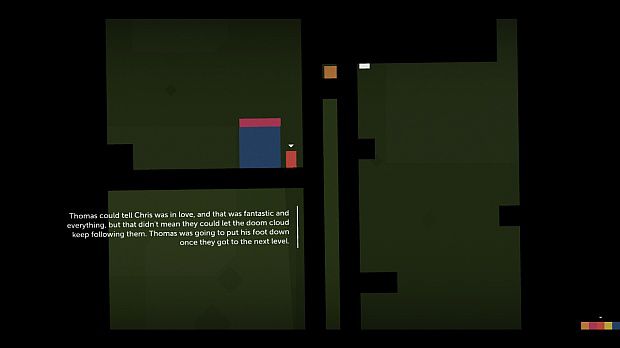 Thomas Was Alone tells a story that’s more complex than games orders of magnitude more expensive and difficult to develop. It’s also a triumph of narrative’s ability to convincingly superimpose human qualities onto nonhuman objects, telling the audience what’s what (who’s what?) and letting the imagination take over. It proves that you don’t need tens of millions of dollars and hundreds of staff to make a game story worth telling, just a good hook, an engaging vision, and a whole lot of heart.

[Thomas Was Alone is currently available DRM-free directly from the developer, as well as on Desura and IndieCity.]

Filed under... #Mac#Thomas Was Alone