Interactive fantasy manages to be heartwarming yet melancholic

“The Yawhg will be here in six weeks…. and no one expects it.”

An air of nervousness hangs over the town; there is much to be done but so little time. What is The Yawhg, can it be stopped, and what will be left if it wreaks its anger on the town?

What The Yawhg actually is has little bearing in the story. Picking a pair of characters, you have six weeks to ready yourself and carve out your own story. What seems like a slight experience at first glance reveals a surprising amount of depth on repeat playthroughs. 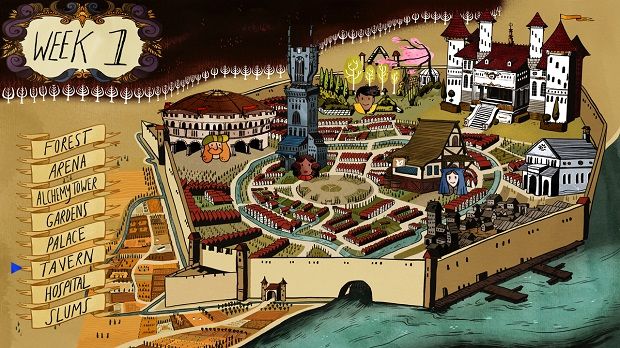 At the start of the game, players have the option of playing as many characters as they like, each being represented as unique portraits. The Yawhg will always play with two characters so a second player can join in. There’s no real difference between the two male and two female characters apart from their appearance and all of them start with the same base level of stats.

Every week your character can visit a single location in and around the town: the forest, the arena, the palace, the gardens, the hospital, the alchemy tower, the slums, and the tavern. At each location, you’ll be presented by a pair of options; in the woods you can either chop wood or hunt; in palace you can either help with administration work or attend a ball. Each of these scenarios will normally give you bonus to your stats such as physique, finesse, charm magic, mind, and wealth. 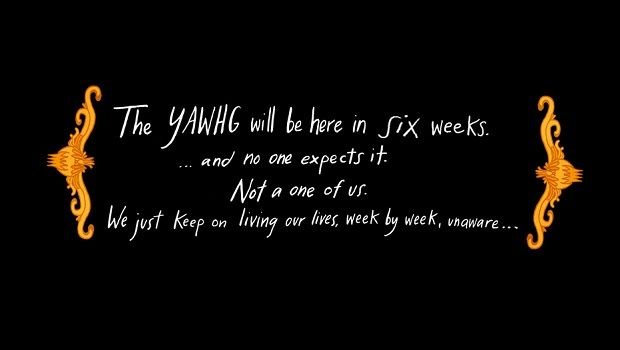 Afterwards there will be an extra task or event that will follow on from the original; say in the hospital, a jar of leeches is broken and are swarming all over the wards. You’re given the option to either blast them with your magic or beat them up. If your magic stat is high enough, that’s the option you should go for. It’s always worth checking your stats as it’s easy to make the a choice that’s going to end up badly but some of the situations could be better explained as to what skill is needed.

Some situations end up influencing the rest of the game; an accident involving a magic potion being thrown into the town’s water supply ends up helping plenty of residents grow an extra leg for the rest of the game. Another scenario involves a magic spell building and building until a player unwittingly destroys one of the locations in the town. This provides some much-needed replayability as The Yawhg can be completed in about 10 minutes.

What elevates The Yawhg from other interactive fiction games is that the writing displays charm and humor that’s never mawkish or contrived. When the game’s finale arrives, there can be a sense of poignancy and melancholy that somehow seems natural despite some of the lightheartedness of the earlier weeks. 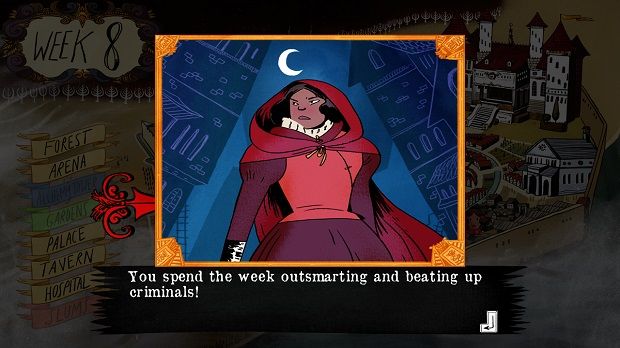 Once the Yawhg has wreaked its anger on the town, your character has the option of choosing a role in the rebuilding of the town, such as a builder, doctor, and so on. Whilst it’s likely you’ll choose an occupation that will reflect your accumulated stats, a random choice will give you a “bad” ending — but even this feels natural and well-suited. The endings have a mix of hope and regret; there are no “happily ever after” endings. Such is life.

It’s a testament to the writing and also the gentle and beautiful music by Duralyn. The game is portrayed through still images showing every possible combination of your choices; your burly male character can attend a palace ball as adeptly as your female noblewoman can hunt in the woods. All the character portraits are simply drawn but are distinct and colorful.

Gamers might be put off by the fact that a single game of The Yawhg can be completed in a matter of minutes, yet there’s enough depth here to merit playing the game numerous times to see all the scenarios play out and how different the endings are. Whether $10 gives you enough value for a mechanically simple, short game is down to you. It’s rare to to play a game that has such simple mechanics but resonates in the memory for so long.