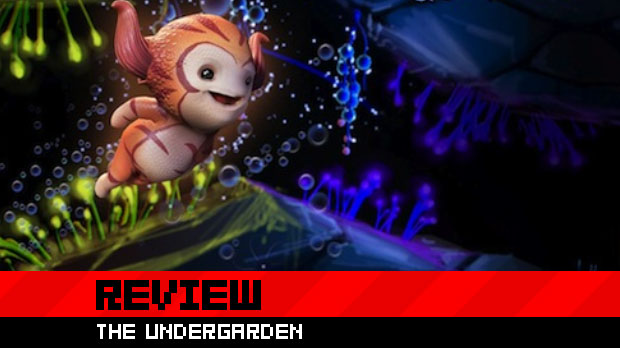 Describing The UnderGarden is a very tricky prospect, because every description you could give automatically runs the risk of turning potential customers away. It’s a slow-paced game, with no narrative to speak of, and your only goal is to make flowers grow in a series of underwater caves.

Yet The UnderGarden is an absolutely fantastic experience, one that is well worth checking out by all except those blinkered individuals who believes that games must always be about conflict and death. There’s very little conflict in The UnderGarden, and no death to speak of. Only life.

It’s all rather wonderful. 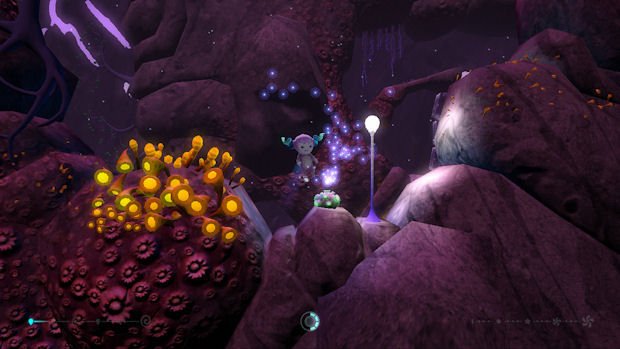 The UnderGarden, like all good indie games, isn’t too fond of explaining itself. You are a cute little guy who is underwater for some reason, and is charged with the task of bringing color and life back to a series of submerged caves. There are vague nods to some deeper meaning in text during loading screens, but their purpose is to fire the imagination and ask questions, rather than explain anything.

In order to make the titular UnderGarden bloom with life, you need to hit pollen pouches liberally scattered throughout the levels to fill a pollen meter. When the mysterious aquatic gardener carries pollen, a glowing trail follows behind him, instantly bringing to life the plants that are scattered across the floors, walls and ceilings.

It’s gratifying to see entire walls burst into alien shapes and pretty colors as you swim by them, and it becomes strangely addictive to try and find 100% of the plants in each level. 100% completion of each level is the most tangible goal of the game, although it’s never strictly enforced. In fact, you could rush through each stage without bothering, but you’d be missing the point. The challenge of the game — finding everything as you explore — is self imposed, and you can take on as much work as you feel like doing. 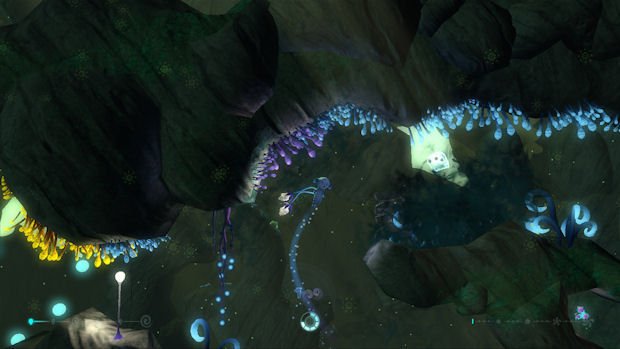 As well as making plants grow, there are other tasks to be had as well. Each level has one hidden crystal, and any number of secret flowers to bloom. There are also Musicians — mysterious little creatures that play instruments and make plants change color — to be discovered as well. Even though a level can be “finished” without finding any of these items, no stage is truly completed without them.

Of course, the game isn’t simply about swimming from A to B and playing with flora. There are a number of puzzles throughout that game that rely on using the environment to your advantage. Various trees throughout the game will spawn fruit when the surrounding plantlife has been grown, and these fruits all have special properties. Some explode when dropped, others weigh down platforms and switches, and all of them will be used in order to continue exploring.

Puzzles are never very challenging, and exist more to keep you active than to actually try and impede progress. Nevertheless, they are all quite fun, especially as the game develops and more interesting varieties of fruit are found. Picking things up is a simple case of tapping a button to create a glowing sphere around the gardener. Anything in that sphere will then become attached to the player character by a glowing blue tendril and can be dragged around freely. 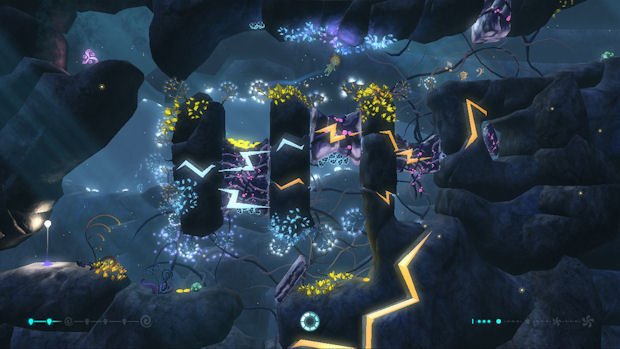 This mechanic, and a short charge boost, are the only real controls to worry about in the game. The minimalist approach puts the focus on being relaxed and simply enjoying the game’s gorgeous sights and endearing sounds. The music is incredibly beautiful, especially when you gather up some Musicians to accompany it. One of the loading screen messages is, “Sometimes it’s just fun to float around” and The UnderGarden lives that statement from beginning to end.

The game has some damn impressive physics, but those physics can also lead to a few issues. Because many of the puzzles are based on objects floating unpredictably underwater, the game doesn’t always do what the developers expected it to. For instance, in one level I exploded a pillar that was propping up a trapdoor, but the pillar’s shattered halves ended up stacked on top of each other, still holding the door shut. Using more bombs and a lot of luck, I improvised my way out of it, but other players may not be so fortunate or patient. Issues with the physics are rare, and you’ll nearly always find a way to cope, but be warned that the rock you need to fall into a certain place may not always land where it ought to.

To keep things spicy, The UnderGarden throws in some unlockable rewards that allow you to customize your own gardener. Different skin colors, unique horns, and a variety of hats can be won by completing levels, and playing dress up by simply swimming through each costume is fun in and of itself, not to mention some of the amusing things that happen to your sound and animation when you wear various hats. My only criticism is that I’d have loved even more costumes, since they become a compelling part of the game in their own right. 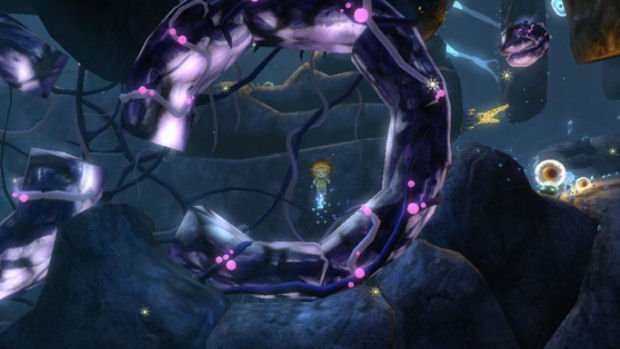 The UnderGarden‘s laid back pace won’t appeal to everybody, and the environments sometimes take a little too much control away from the player, especially during those levels where you feel you’re bouncing off the walls a bit too much, but for the most part, this is one of those games that are simply a joy to be in. Without guidance or strict structure, it’s a simple, unpretentious, consistently adorable game that appears designed entirely to produce smiles from gamers. The closest comparison I can draw is the PlayStation Network’s Flower, but even then, these are two very different games.

More “experience” than “videogame”, The UnderGarden is a pure delight that proves you don’t have to be a super tough “hardcore” title in order to be fun. It’s not action packed, it’s not punishing, and it’s not what you would normally turn your Xbox 360 on for.

It is, however, something you should turn your Xbox 360 on for.