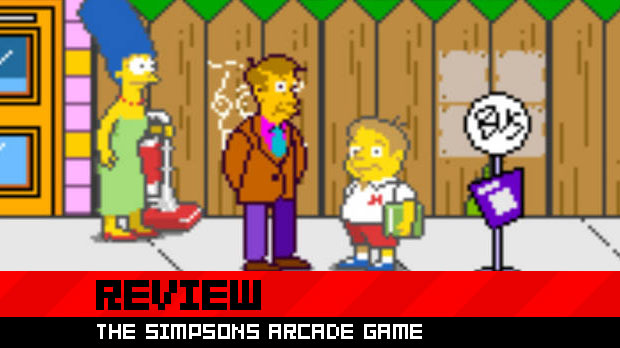 Any gamer of a certain age will be able to bore you extensively talking about two particular arcade games: Teenage Mutant Ninja Turtles and The Simpsons. The classic TMNT game arrived on Xbox Live Arcade years ago, but as with many licensed arcade games, it seemed unlikely we’d ever see The Simpsons hit a digital platform.

Sometimes, however, the legal red tape can be cut through, and nostalgia wins the day. The Simpsons Arcade is back, and gamers of a certain age can once again bore the world. 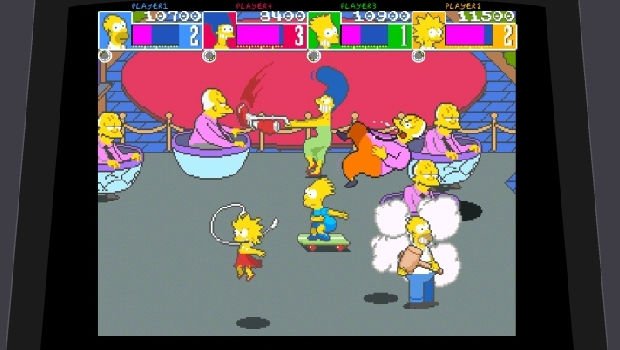 The Simpsons Arcade first hit bowling alleys and leisure centers in 1991, back before the TV show got legitimately funny. The highly contrived plot sees Maggie replace her pacifier with a diamond, which Waylon Smithers is trying to steal for Mr. Burns because of reasons. Rather than remove the diamond, Smithers decides to steal an entire baby, prompting the rest of the Simpsons clan to give chase.

Part of the joy of The Simpsons Arcade is in just how ridiculous it is. When we were children, nobody considered the implications of a bespectacled man (wearing an inexplicable cape) joyfully kidnapping a child, or the randomness of Mr. Burns having an entire army of goons that try to kill a whole family — including an eight-year-old girl — for want of a diamond that he could likely have easily afforded. In fact, with the amount of money he wasted on trying to actively murder one of his employees, Mr. Burns could have bought the diamond outright for a lot less.

Not to mention the fact that both Smithers and Mr. Burns sound like Peter Lorre as opposed to themselves. Oh, and Marge’s weapon — a vacuum cleaner — looks woefully sexist in a modern light. It’s a true highlight of this game to examine just how insane it actually is, despite us all taking it for granted back in the day. 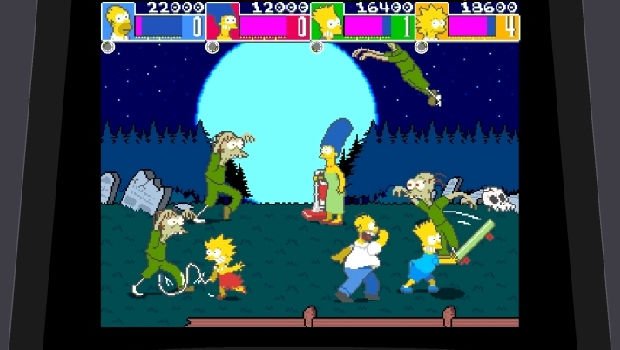 Using the same engine as TMNT, Konami’s classic coin guzzler is a straightforward, simplistic beat-em-up, and some players may be surprised by just how rudimentary the action is. Playing as either Bart, Lisa, Homer or Marge (who is still the best character, thanks to the reach of her vacuum), the only real commands are walking, jumping, and hitting. Pressing jump followed by attack creates a diagonal kick, while pressing the two buttons together causes a more powerful maneuver. If two players attack together, they can perform team attacks. There are also rare weapon drops, such as a slingshot or bowling ball, and a few trash cans to pick up and fling, but otherwise the eight stages consist of walking, punching, and getting punched a lot.

It almost seems redundant to say that a twenty-year-old game has aged, but it’s a warning players need to be reminded of. This was a game designed around killing the player as cheaply as possible in order for an arcade machine to grow fat on quarters, so the simplistic combat is married to frustratingly overwhelming odds that were designed to test patience and pockets instead of skill.

To counteract this on a console, Konami has allowed players to customize their own virtual credits. The default is forty, which is more than enough to beat the game, and a team of players can either share a single credit pool or have their own. There are also difficulty settings and a one-life survival mode, and a stage select screen is added as new levels are unlocked.

Other extras include sound tests and character screens, as well as the ability to unlock a Japanese ROM of the game once the American version has been beaten. There are also options to smooth over the traditionally blocky graphics and toggle the screen size, though I much prefer the defaults. The game is nicely presented in a virtual arcade cabinet, which looks better than the screenshots in this review imply, and you can choose to remove it if you wish. Once you add online play and leaderboards into the mix, you’ve gotten a definitive version of a game still beloved by many gamers who fondly remember it. 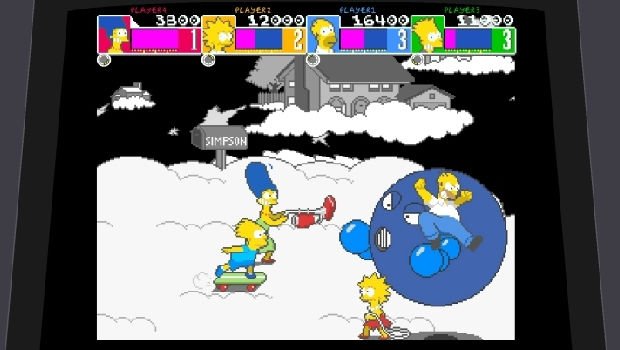 Fondly remembering The Simpsons Arcade is the caveat, though, as nostalgia is a key component to enjoyment. Objectively, by today’s standards, The Simpsons Arcade is not very good. It’s a brainless button-masher that is beaten through sheer attrition, and is so numbingly repetitive that one’s thumb will feel arthritic despite the incredibly short length. To anybody playing this game for the first time, it’s not going to be looked upon favorably in the least.

However, Konami didn’t release it for people new to the game. This is for those who lost their pocket money trying to get past that infuriating Krusty balloon, who made it all the way to Smithers before being obliterated by one of his thousand bombs, and who still remember Princess Kashmir as a legitimate Simpsons reference. For them, this is a loving HD re-release of a game that’s very dear to their hearts. For such people, playing The Simpsons Arcade is a joy that no amount of aging can quite take away.