Over the past few decades, SNK has created a vast stable of memorable characters and franchises. I remember going into an arcade as a child for the first time and spending $10 on Fatal Fury, finding the fighters there more appealing in many ways than Capcom’s Street Fighter cast.

SNK has melded these characters into just about every genre imaginable, from beat-’em-ups to shoot-’em-ups (King of Fighters Sky Stage rocks by the way), and now, they’re pushing out a rhythm game. Despite the fact that it doesn’t defy genre conventions in the slightest, that reliable stable of IPs works strongly in SNK’s favor yet again. 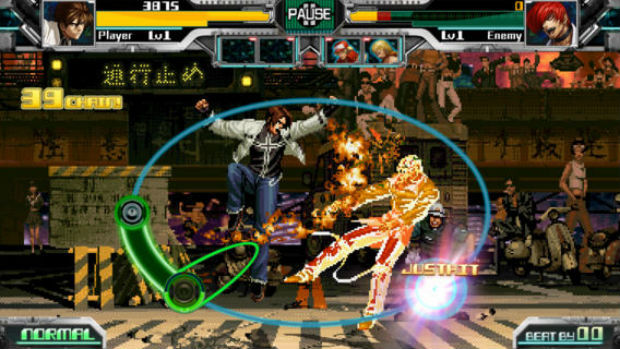 Although some of you may not be immediately on board with the idea of a touch-based rhythm game, it works better than you’d think. Similar to Elite Beat Agents, icons will appear on the screen, ranging from the simple “tap” variety, to the “directional flick,” up to the “tap, hold, then release” beat. Unlike Elite Beat Agents where you had to touch a specific location on the screen to initiate the beat, however, you can tap anywhere with The Rhythm of Fighters to make up for the lack of a stylus.

Because of the smooth animations and the giant circular pattern on the screen, it’s easy to identify which of the three notes is coming up, and even with the smaller screen real estate of a phone, you can just tap somewhere in the corner without blocking the action. While I did encounter some songs where the beats didn’t quite match up with the song, for the most part it’s pretty spot-on.

While you’re tapping to the beat, the gimmick of Rhythm of Fighters is that you’ll be doing battle with fellow King of Fighters characters just like a typical 2D fighting game. More successful taps will result in combos, as well as the ability to block attacks from your enemy. If you miss too many notes, your life-bar will deplete, and you’ll have to start the song over again. If you happen to do enough damage to kill your rival, a new one will pop in immediately to take a beating.

While it’s not really an essential part of the game since it’s just showing you a visual representation of your rhythm work, it’s a nice enough way to show your progress without resorting to just a dull life meter. That said, there is an awkward scene transition after a big combo is performed which essentially teleports both combatants back into the action to accommodate for the next notes. It doesn’t feel nearly as smooth as it could be, and it’s a missed opportunity to display advanced off-the-ground and aerial combos if long strings of notes are hit.

There are only two methods of play — arcade mode, which tasks you with completing five levels in a string, or free mode, which basically lets you pick whatever song and difficulty you want. Arcade mode is the bulk of the game, since you’ll have to go through all 50 courses (most of which are repeats on different difficulty levels) to fully unlock all of the extras and songs. The vast majority of unlocks are ancillary options like additional sounds that play when striking enemies, and “support” characters — essentially power-ups that make some levels easier, that can also be purchased for $0.99 a pop.

In some ways, arcade mode feels like a slog in that you’ll hit a wall, and have to “go back and level up” in past levels with your character to make for an easier clear. This wouldn’t normally be a problem if skill was the only limitation, but a few objectives for arcade mode are crafted in such a way where you need a stronger character to complete them. It doesn’t help that it takes almost 20 stages to get to the point where you are consistently playing songs on the “normal’ difficulty setting — selecting a skill level right off the bat would result in a far less remedial experience for rhythm game fans. 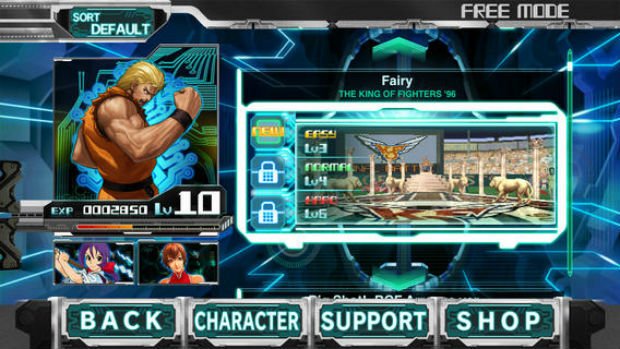 Rhythm comes with 14 tracks in its base $0.99 price, with the option of buying 16 more (including four Metal Slug 2 songs) via in-app-purchase packs. Character-wise, the game comes with Kyo, Athena, and Ryo, with the option to buy Iori, Terry and Nakoruru for $2.99 each. So not including the “support” power-ups, the full price of the game for 30 tracks with characters comes to $22. It’s not outrageously high, but ideally the game should be priced at $10 for everything. Then again, looking at how stupidly expensive Theatrhythm is for iOS, this is more favorably priced.

The Rhythm of Fighters falls into some of the unfortunate trappings of the mobile platform, but ultimately the base price of $0.99 is a great-feeling option for those of you who are big fans of SNK’s music. It’s a very by-the-book rhythm game that’s been done many times before, but the unique pairing of SNK properties and the included tracks mesh together better than it would seem at first glance.