The Real Texas is a game that reminds me why I got into indie gaming in the first place: it’s a unique experience unlike anything you’d find on store shelves. Immediately after I saw the launch trailer, I knew The Real Texas was going to be an entertaining game. What I didn’t expect was an extremely well-written adventure through an incredibly quirky universe.

The game is self-described as “an action adventure game that plays like a mashup of Zelda: Link to the Past and Ultima VI.” Interested? I thought so.

The protagonist’s name in The Real Texas is Sam, but that information is only given out on the official website. The character’s name isn’t even asked about within the game itself, since everyone just calls him “Cowboy.” Sam is an American vacationing in England, but soon enough stumbles upon a blue portal, taking him to Strange Texas. From there, it quickly becomes apparent that you need to find out what this place is, Sam’s purpose, and how to get out.

Strange isn’t only the name of the town, but the quintessential adjective to describe this game. Questions will undoubtedly whirl through your head while playing through The Real Texas. The game deals heavily in metaphysics; it isn’t uncommon to start questioning what is actually real and what isn’t. Or even perhaps what being “real” even means. Fleeting thoughts turn into real concerns and small issues quickly become big ones.

There are plenty of characters in the town of Strange to interact with during the game. They seem almost secondary at first, but it doesn’t take too long to get caught up in their various plights. Although there was no prior connection to these characters, it didn’t take long before their issues became a focus. Many of their issues were incredibly relatable, despite sometimes being bizarre on the surface. 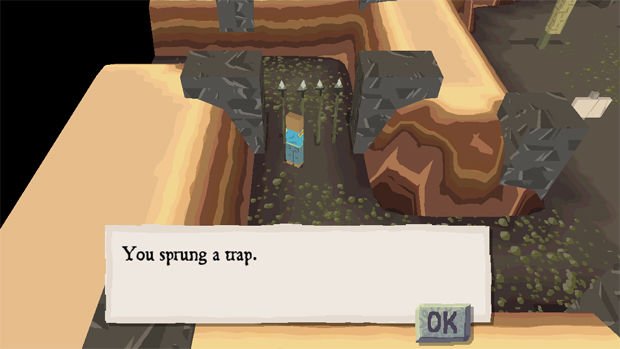 Dialogue harkens back to the classic adventure games where dialogue trees are spurred by mentioning a specific word or phrase. The Real Texas doesn’t overcomplicate things though, and displays the key words on the screen. Just click or type them to progress the story instead of weeding through the unimportant words to find the right trigger word. There are, however, other key words not given which will trigger a sort of “hidden” dialogue reaction, often of the hilarious variety.

Oh man is there some wonderful humor in this game.

By setting up a bizarre, quirky, and yet believable world with Strange, the nonchalant quips that some of the characters make become one of the most beloved aspects. Situations arise that are borderline absurd and yet no one bats an eye. The commitment to the eccentric is what makes this game such a joy to experience.

Movement is accomplished with the traditional WASD style or by holding and dragging the left mouse button, and interacting with objects involves clicking on them with the mouse. At times, clicking on specific objects in the environment can be difficult, but it never becomes more than a slight nuisance. A bigger issue comes when trying to click on something while moving since — if the object isn’t clicked on Sam — will just stop moving because the game will switch to mouse movement immediately. Again, only a minor nuisance but is nevertheless worth mentioning.

Progression through The Real Texas comes with a mix of intelligently designed puzzles with a side of combat. Completing puzzles often grants a huge sense of satisfaction, the key aspect to a great puzzle. There’s enough variation that there isn’t a significant sense of familiarity between them. I did come across an issue with the last puzzle in the game due to my colorblindness. Without spoiling it, I had to go to extra lengths in order to complete the puzzle, resulting in a lot of in-game money lost. Mr. French is aware of the issue and it should be patched in version 1.3. 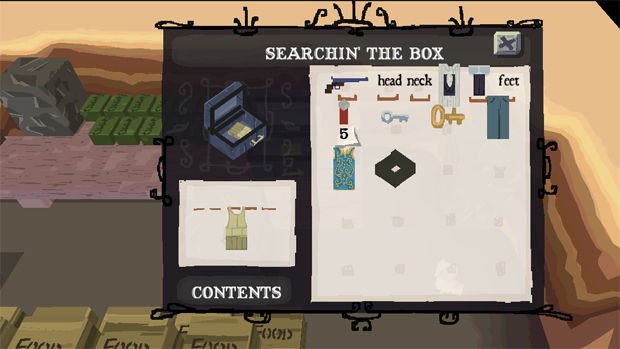 As for combat, hitting either the spacebar or the right mouse button enters combat mode in which the cursor becomes the aiming reticule. When only fighting a few enemies at a time, it works fine, but it can become a hassle when confronted with multiple enemies of various types. Mr. French has already taken some steps to make the enemy behaviors a bit more tolerable, but certain enemies are certainly still an issue towards the end of the game.

Perhaps the combat is intentionally difficult as a contrast to the character’s nickname of “Cowboy.” When Sam is injured, he will occasionally hunch over and take a deep breath, something that plays against our ideal version of the western movie cowboy. It’s impossible to move and shoot at the same time, a mechanic the classic Resident Evil games employed to make the player strategically choose their location during fights. It works just as well here, epitomizing the idea of risk vs. reward during combat. In fact, the schism between Sam’s character and his nickname isn’t unlike the difference between the bizarre setting and the real characters. Fancy that.

Regardless, combat can get quite frustrating towards the end of the game. Sometimes entering a room can result in being on top of an enemy and getting killed almost immediately. Other times, getting hit once results in an unstoppable chain reaction that leads to death. It’s great, then, that the checkpoint system isn’t too harsh, only resulting in some money lost at times.

There’s also an inventory system that allows the changing of Sam’s appearance and what item he is holding. Early on, it’s necessary to manually switch weapons via the inventory screen, but this is later alleviated thanks to a specific item, allowing the use hotkeys. Dressing and undressing Sam can provide decent entertainment since there are a good amount of clothing options to encounter and wear. It’s pretty entertaining to strut around wearing a swan-inspired dress and no pants. 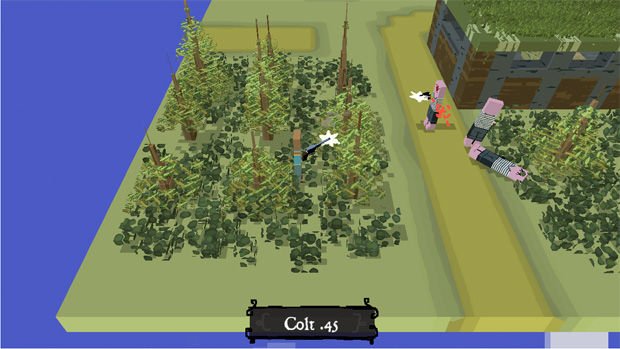 Since this is such a new release, I did encounter a couple of progress-halting bugs. Mr. French is going above and beyond the call of duty to help fix these, by working on patches and even fixing individual save files. Whenever I couldn’t progress I sent my save file to Mr. French and had it back usually within an hour or two.

The art style and music should also be lauded. The blocky aesthetic works wonders to make this already curious world even more extraordinary. Characters move with a swaying motion, not unlike those in Stacking, and it is completely adorable. It’s cute, charming, and best of all it jives with the general strangeness of the game.

The background music is catchy, simple, and thematically fitting. The music screams “grandiose adventure” while trekking through the various environments the game has. The sound effects are very fitting to the aesthetic and have a very old-school videogame vibe to them. 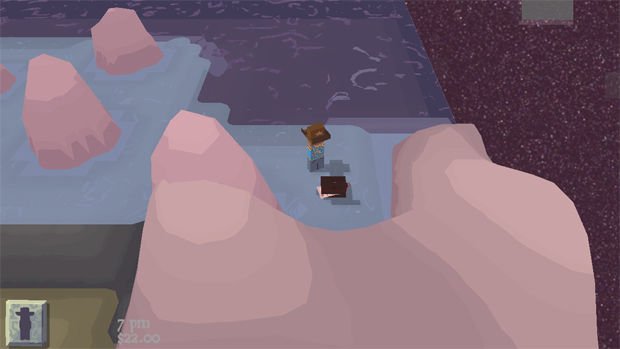 The end result of all this is a bizarre yet satisfying mix of gameplay elements wrapped up in a surprisingly eloquent story with a damn good sense of humor. The puzzles can be frustrating in a good way, but the combat gets frustrating in a bad way when confronted with multiple enemies at a time. The progress-halting bugs are slowly being fixed, but some still remain.

The Real Texas is an incredibly smart game, particularly in how it deals with large metaphysical ideas and conveys them to the player. The dialogue is well written and the humor is one of game’s brightest aspects. Although not all of the ideas work out perfectly, this is certainly an experience that is hard to find anywhere else and is certainly worth trying out.