As dumb as you want it to be

Despite having every flaw I have ever harped on in any review, The Meg is one of these films. It makes me look like a hypocrite when I come down hard on other movies of its ilk, but there’s a certain magic to making a movie like this and The Meg nails it. It’s beyond stupid, full of cliches, has only acceptable CGI, and features a host of actors who still can’t believe they signed on for it. It’s also awesome.

I had one requirement for The Meg: Jason Statham had to punch a shark in the face. Requirement met, though he’s holding something pointy when he does it so maybe its more of a stabbing. I think that honestly sums up the plot pretty well too. A giant, prehistoric shark known as a Megladon escapes from the deepest parts of the ocean thanks to human curiosity and starts killing people so Jason Statham has to punch it in the face. There are other actors who portray other characters, but they hardly matter as they all fit nicely into the exact tropes they should and don’t really affect the basic plot of Jason Statham punching a shark in the face.

If you’re still here I’ll also let you know that while The Meg barely functions in terms of logic, it flies off the screen in terms of creative shark attacking and thrills. There are genuine moments of tension in this film despite its outlandish premise. A prolonged rescue sequence on the bottom of the sea is both scary and builds well. Some of its shark sequences are actually pretty creative, and it genuinely has some surprises in it. 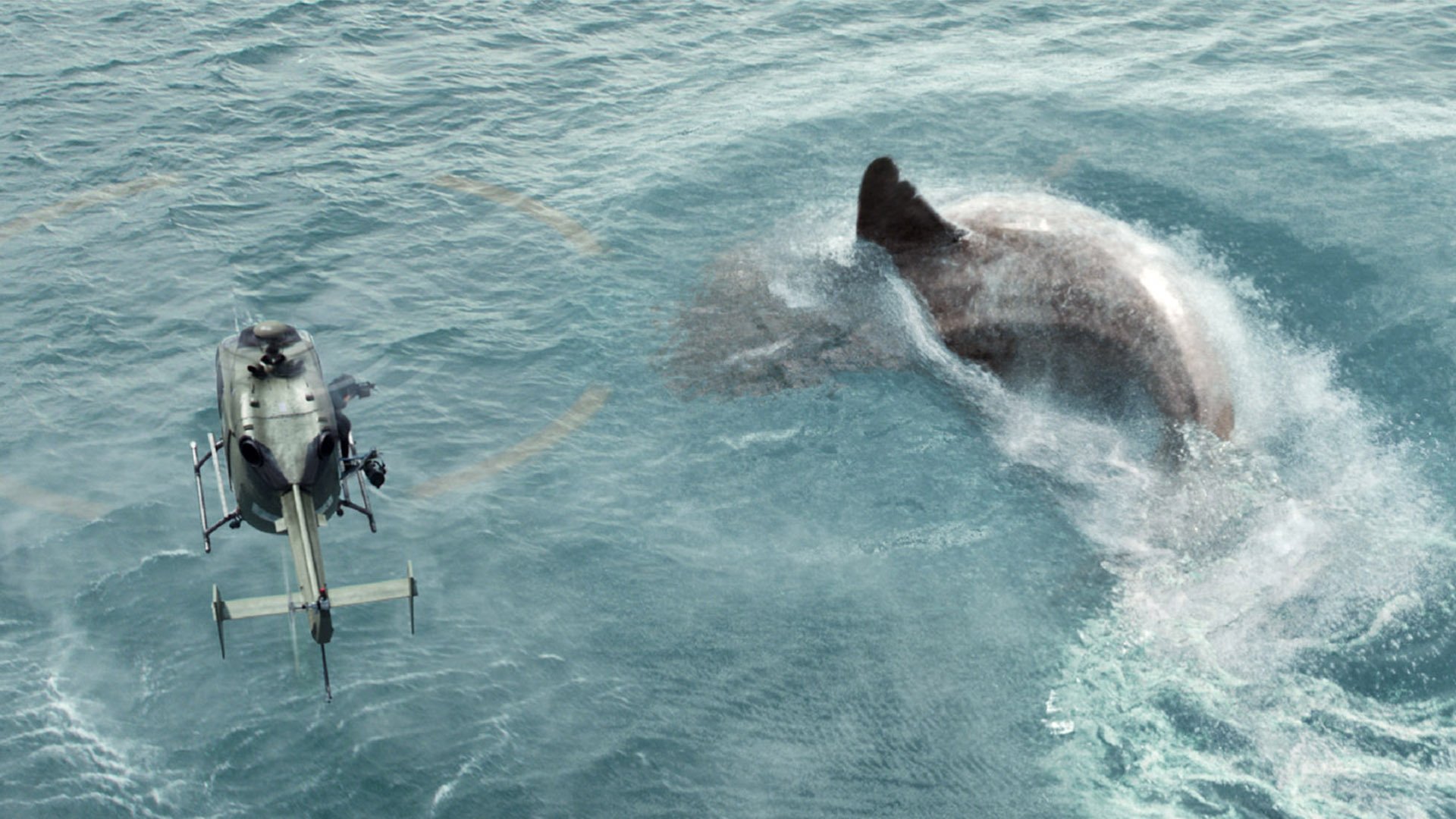 Even when it’s not being all that creative it’s still almost consistently fun. It never makes the mistake of taking itself too seriously, and wisely spends most of its time tearing along at such speed that you don’t need to stop to think about the megalodon-mouth-sized plotholes.

Why do they keep bringing a kid with them into dangerous situations? SHARK ATTACK!™

The millionaire funding everything has no idea what oceanic research is? SHARK ATTACK!™

We’re not going to call anyone to help out here? SHARK ATTACK!™

Jason Statham and Li Bingbing are really the only two people in the world able to help? SHARK ATTACK!™

I may start using this as a technique when I need to get out of conversations. Just throw a shark at people and they’ll forget everything stupid you’ve ever said.

There are a few flaws that not even a SHARK ATTACK!™ can solve. The film was clearly made to pull in massive amounts of money from China. This means that half the cast is Chinese, including our leading lady, Li Bingbing. That’s not always a problem, but in this case, the romantic relationship between Statham and her is like a brick wall to everything else going on in the film. The two have the opposite of romantic chemistry. They’re supposed to have quirky banter, but it’s painful to watch them “flirt.” It feels like something out of the British version of The Office. It’s even worse because the little girl they cast as Li Bingbing’s character’s daughter and Statham actually work together fantastically so you have this direct contrast to how two actors can actually work well together.

Honestly, what really works about The Meg is that it feels fun the entire time. Director Jon Turteltaub, the mad genius who brought us both National Treasure films, gets it. He’s not trying to play anything too serious and he’s not going full Sharknado. The ideas are simple, and he executes them with a desire to entertain. He understands he’s making a giant shark movie and it’s just supposed to be fun and so he makes it like that. For example, he’s got Rainn Wilson playing the sarcastic, asshole millionaire, but with a twist that has him echo the audience’s own internal monolog about how idiotic and cliche everyone is being. It’s little nuances (yes, I used that word in relation to a movie that features a giant shark getting punched in the face by Jason Statham) like this that turn the film into a good bad movie instead of a bad bad movie.

There is a palpable difference between watching a film like The Meg – full of gory, unadulterated, stupid fun – and watching a truly bad movie. Both were designed, theoretically, to be dumb fun where you can check your brain out, but bad movies don’t let you do that. They’re not built in a way that actually entertains, they’re just bad. The Meg, on the other hand, is dumb fun. It works as that. Is it anything more? In answer to that question let me state one more thing:

Jason “I Punch Sharks in the Face” Statham punches a megalodon in the face and it’s everything you want it to be. That’s only half a joke. The true fun of a good bad movie comes from it being able to elicit the response from you that you expect it to elicit. Punching a shark in the face should be awesome, but that’s actually not easy. Bad movies can’t do it and they ruin moments that should be awesome with shoddy directing or poor pacing. That’s why The Meg succeeds because sharks getting punched in the face by Jason Statham should be awesome, and then it is.