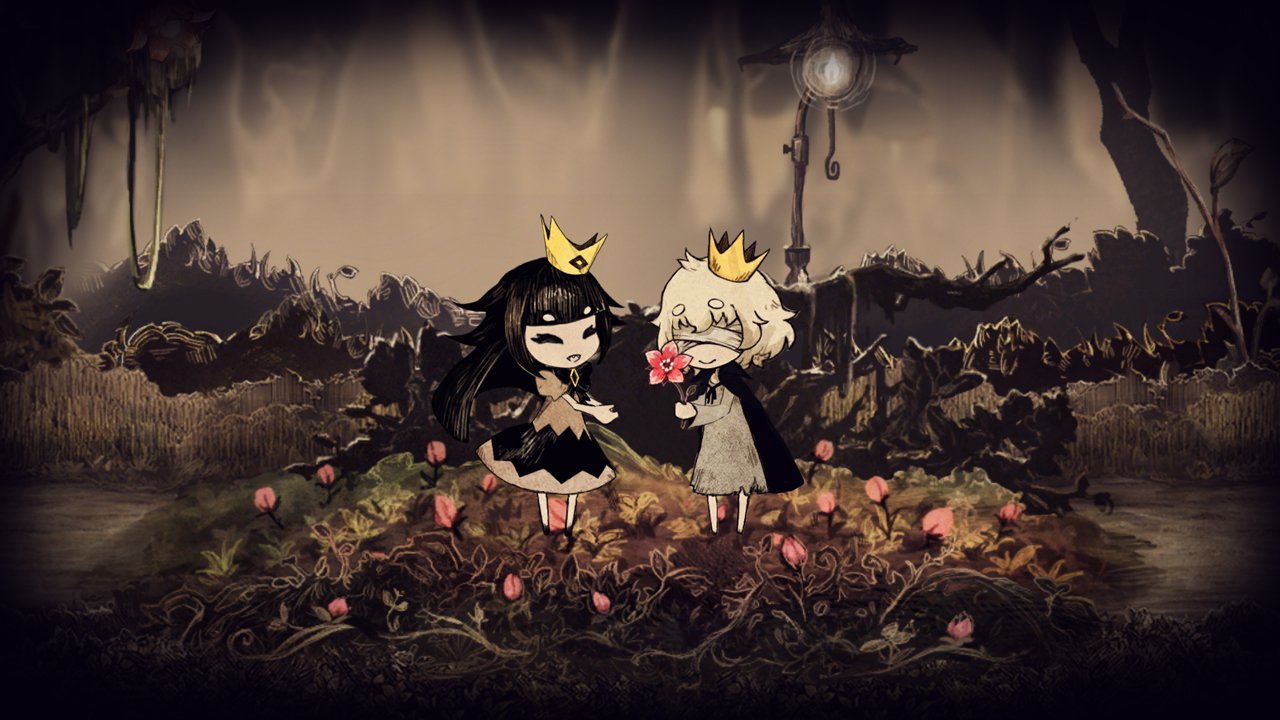 Several days ago, a question came across my Twitter feed asking me to name an average game I absolutely adore. It was difficult for me to answer because I don’t very much consider any game I adore to be average. Breath of the Wild‘s not average, Overwatch is not average, hell, I even consider Fragile Dreams: Farewell Ruins of the Moon to be an above-average experience, Metacritic score be damned.

I ended up not answering the question because there just wasn’t a game that came to mind. Nothing fit that criterion for me. Nothing…until now.

The Liar Princess and the Blind Prince leans hard in the fairytale aesthetics right from its opening moments. It starts with a slow, though whimsical, text-driven cutscene that sets up the world, the characters, and the building blocks of a story about growth and the lengths we go to protect the people we care about. The story takes place in a shrouded forest overrun with monsters and ruled over by a witch. Most people don’t dare venture into the thicket, fearful of what lurks in the shadows, but the titular prince of this story doesn’t fear the unknown. In fact, it’s one unknown that lures him deep into the woods. A voice, singing its soul out straight to the moon, serenades him nightly. That voice belongs to a massive wolf, who comes to appreciate the prince as her audience. As monsters and humans are eternal enemies, she doesn’t reveal her true form to him, keeping her figure obscured by the cliff she perches on.

One night, after hearing her sing so lovely, the prince decides its time to meet this songstress and climbs up the cliff. The wolf, afraid of what he’ll think, tries to block his eyes but ends up inadvertently blinding him instead. Seeking to make right all she has done wrong, the wolf goes to the witch of the woods and asks to be given the form of a human princess. The witch agrees, taking the wolf’s voice as collateral, beginning a journey that will see the princess guide the blind prince through the treacherous dangers of the forest.

Everything you just read is covered in the opening to Liar Princess. Before you even take control of a character, you’re given well over 10 minutes of exposition and story, setting up the roughly five-hour adventure at hand. It can feel overly long, as do many of the picturebook cutscenes that litter the campaign, but its verbosity is necessary as the story is the main draw here. This is fantastic news if you’re in the mood for a fanciful fairytale, but not so much if you’re looking for a challenging game.

Liar Princess is can best be described as a puzzle-platformer escort mission. The princess, who can change from her human form to her wolf form with the press of a button, must take the hand of the prince and guide him through each stage, protecting him from other monsters and using his abilities to solve the puzzles that stand in their way. As a wolf, she can attack and fall from great heights without worrying about damage. As a human, she takes one hit or falls from too high and it’s back to the last checkpoint. The same goes for the prince. Let him get hit and you have to restart back a bit in the level.

Initially, the prince is helpless and useless beyond standing on switches, but he eventually adds the ability to carry objects to his repertoire as well as walk short distances on his own. Most significant is his ability to carry a torch, which allows the duo to light up darkened paths and clearly see the danger in front of them. There is a lot of potential for experimentation with this set-up, his talents and her shapeshifting ability, but Liar Princess fails to adequately mix the two until the absolute final level.

Outside of one bizarre — and quite frankly, out of place — brainteaser, none of the puzzles found in the levels present any sort of challenge. Most are just different variations of the same press-the-switch puzzle. Combat is similarly simple, as the wolf is invincible and can kill most any monster in three hits. Liar Princess never quite makes for a compelling puzzle-platformer nor does it establish itself as a proper action-platformer. It exists in a strange middle ground, one that could be immediately forgettable if not for everything else that makes this game what it is.

Two years ago, I reviewed A Rose in the Twilight, another NIS joint, and called it visually spectacular. Liar Princess is another stunner. Its world is impeccably designed, the main characters are a delight, and some of the creatures that creep through the copses are drawn in ways I’ve never seen before. Levels make extensive use of the foreground and background as well as lighting for dramatic effect. Even if I didn’t always enjoy playing this game, and there were times I was just going through the motions, I never once took my eyes off the screen as I was completely captivated by the world Nippon Ichi Software created. That level of enthrallment extends to the soundtrack, which elegantly portrays the right mood and emotions for every level and cutscene.

As wonderful as the art and soundtrack are, and for as much as I enjoy the story, they can’t quite save what is otherwise a pretty standard puzzle-platformer. The Liar Princess and the Blind Prince only ever comes close to meeting its potential in the final stage of the game, and that’s not an exaggeration. Every time it flirts with some creative concepts, it quickly retreats to its quotidian comfort zone. I personally love this game because I enjoy a good fairytale, but unlike the titular prince, I’m not so blind I can’t see everything that’s wrong with it.