The Legend of Zelda: Link’s Awakening had a profound impact on me growing up.

Although I was already familiar with more traditional JRPGs like Dragon Quest and Final Fantasy at that point (and had played the first two Zelda games), Link’s Awakening was one of the first moments I truly got lost in an adventure. The portability of the Game Boy helped, as I’d spend nearly every single family car trip beating Mario Land first (quickly), before I started to chip away at yet another Awakening run.

It’s gotten to where I’ve memorized entire dungeons: a skill that served me well when playing the incredibly faithful, but slightly flawed, Switch remake. 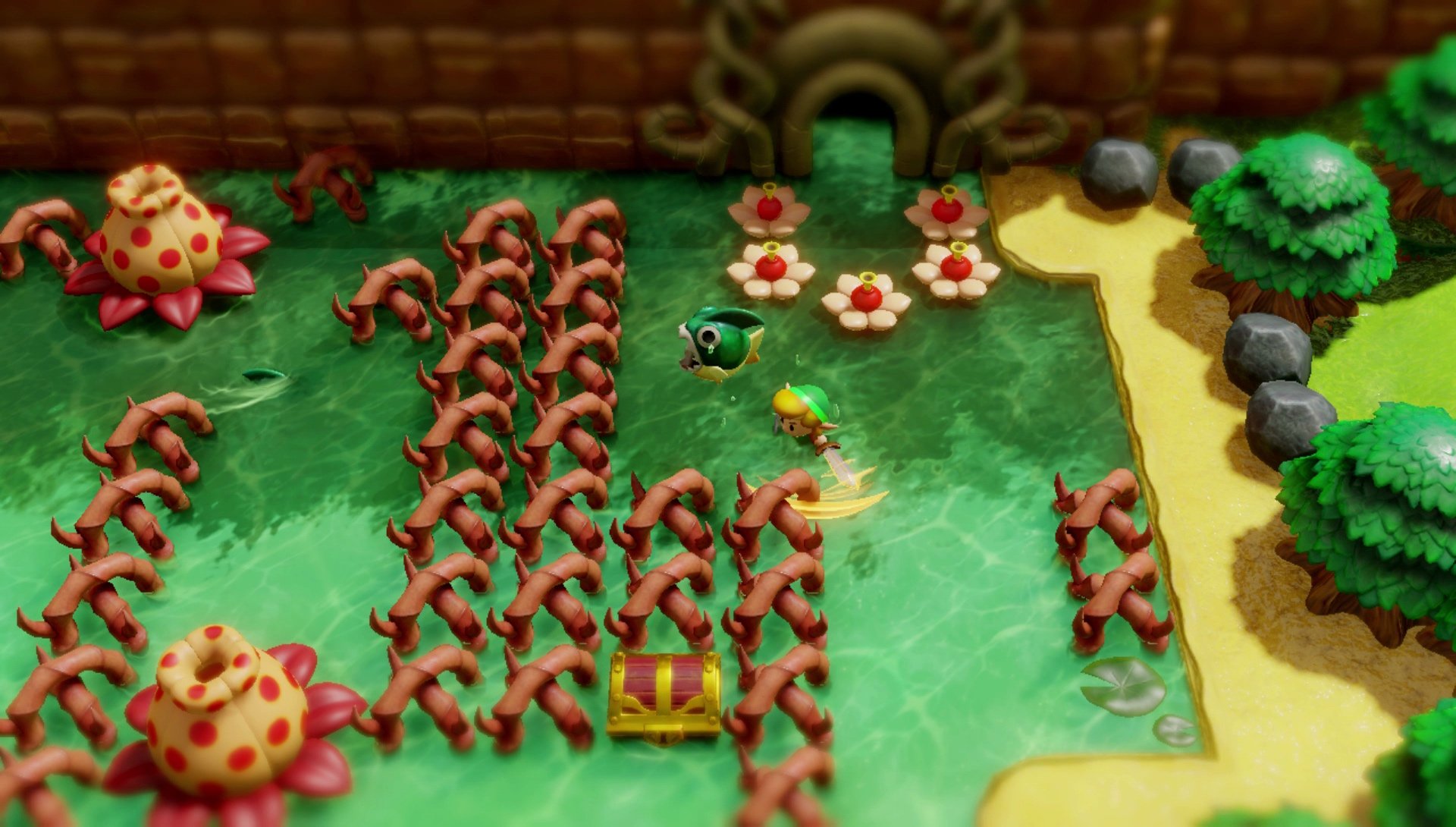 Having played every Zelda game to date, I firmly believe Link’s Awakening is one of the most, if not the most accessible entries in the series. Although Zelda is sort of known for its penchant for standalone stories (let’s not get into the whole timeline debate here, much love), Link’s Awakening is Zelda meets David Lynch: it simultaneously makes no sense and makes perfect sense. Just drink your fine coffee and accept it.

You’re washed away on a mysterious island and told to wake the Wind Fish, which is actually a mammal. It’s a world filled with Mario enemies like Chain Chomps and Goombas — wacky inhabitants that would give any Zelda game a run for their money. This is ostensibly a side story, a gaiden of gargantuan proportions, and you’re along for the ride. It was an idea that allowed Nintendo to break free of the typical Zelda conventions at the time (which the company had already low-key done with Zelda II), and because of that bravery, the premise holds up decades on relatively untouched.

While it’s not fair to disparage the limitations of the original Game Boy, the Switch does this angle justice with hardware enhancements. You’re no longer tethered to small box-like screens, and level design has a more free-flowing feel to it. There’s a certain gumminess to the aesthetic, almost like a Super Mario RPG veneer, which is just lovely. Enemies are completely redesigned in some cases, where I would think “oh that’s what that is!” when directly comparing them to their pixelated predecessors (which, again, has its own charm, and in a few cases, better character models where less is more).

To my surprise, the Switch — especially in portable mode — can’t fully handle this jam-packed engine. Although the game is mostly fine in my experience while docked, it chugs in many cases when playing on the go and has a blurring effect on a portion of the screen. When it really counts (dungeons/boss fights) it’s stable, so it’s not a dealbreaker, but having slowdown during some open-world item hunt excursions was rough. Similarly, it does such an amazing job of recreating the original source that it replicates some of its flaws.

One of the main issues I’ve always had with Awakening is the uneven boss fights, many of which are overly-simplistic gimmicks: a few can be taken out in five seconds or less. A few key locations are a little too far off the beaten path, almost to the point of trial and error. Now esoteric and out-there puzzle solutions are par for the course for old-school Zelda games, and the blow is softened here by a reasonably sized map that’s full of life (you won’t have too much trouble knowing where you are without having to look at the pause screen every few seconds).

Awakening follows that immensely satisfying formula of “get a new item, learn a crucial ability, then quickly recall all of the areas you’ve seen so far that could utilize it.” While the aforementioned cryptic puzzle solutions definitely pop up periodically, it’s very hard to get lost as you can always call up “Old Man Ulrira” for advice, who often doles out specific directions. I’ve always admired this bit, because even during repeat playthroughs, there’s always one part where I’m going “uhhhh what’s next?” One phone call to the in-game help center can clear up my confusion quicker than a Google search. 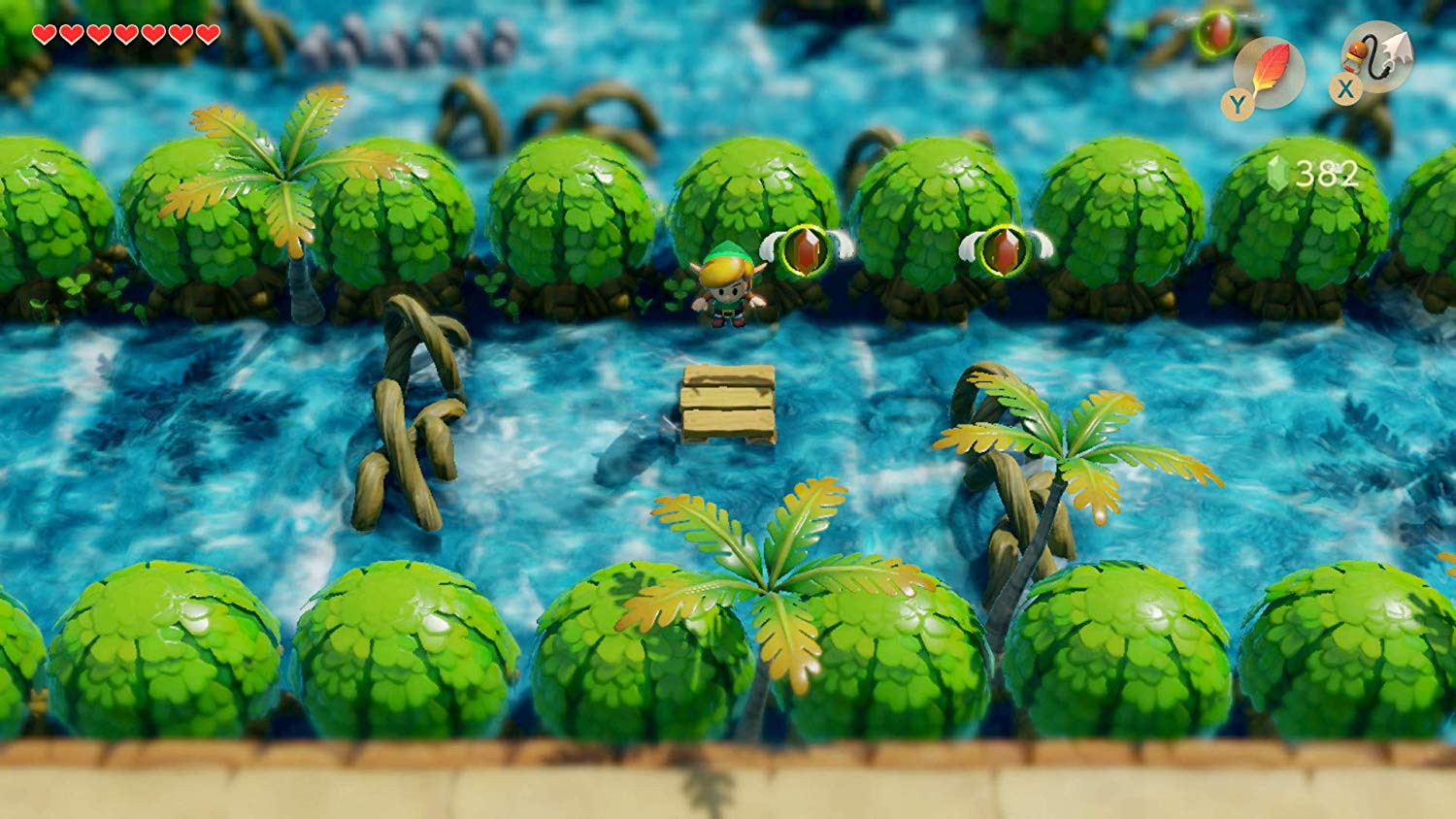 So what’s new, content-wise? Not a whole lot. There’s collectibles here and there, little nods to Nintendo history, the Color Dungeon from the DX edition, and a new create-a-dungeon feature thanks to gravekeeper Dampé. I was expecting this to be a throwaway addition — and in some sense it kind of is long-term, as you can only choose pre-arranged rooms based on dungeons you’ve completed — but I was pleasantly surprised to see there was a little questline included that doubles as a tutorial.

The quality-of-life upgrades are far more meaningful. The map contains extra visual details, and you can place markers on it (I used the heart symbol to denote fairy ponds, and so on). You also have the ability to recall dialogue for hints, which is super useful for when the game’s owl guide basically spells out where to go next and you “accidentally” skipped his winded speech. Hero (hard) mode is available at the start, and a few items like the Power Bracelet, the Pegasus Boots, and even the sword/shield have their own dedicated buttons or are baked into your standard kit. (Remember, due to the two-button nature of the Game Boy, you had to equip everything individually.)

Slight gripes with the new engine and the old source aside, this is still Link’s Awakening: one of the best Zelda games to date. Although I don’t think I’m going to rotate the DX version out of my yearly Zelda replay sessions, I’ll definitely be working the Switch remake in.