A nice but brief romp with Korra and Naga

One of the biggest surprises of 2014 had to be the announcement of a Legend of Korra game, published by Activision and developed by Platinum Games. Yes, that Platinum Games — the current master of action titles.

It’s only been a few months since the reveal of said Korra game, and already it’s out on just about every platform imaginable outside of the Wii U. While the core result is indicative of Platinum’s seal of quality, it feels rushed in many ways. 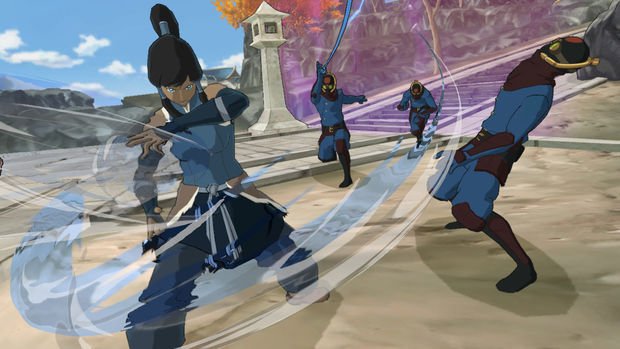 For those of you who don’t follow the Avatar/Korra cartoons, here’s a quick refresher on what to expect. In the realm that Korra inhabits, there are four core elements: earth, air, fire, and water. Through rigorous training, benders can master any one of these, but the “Avatar,” a living god-like entity who is reincarnated over time, can master all of them. Korra is one such Avatar.

The game picks up in a strange spot having explained almost none of her backstory (outside of the aforementioned Avatar setup), and you’re dropped into the action in Republic City right away. This is both a good and bad thing, depending on what you want out of Korra, as the story and any sort of real narrative takes a backseat throughout the adventure.

Cartoon cutscenes are spliced in throughout, but they often last 30 seconds at most and serve as nothing more than quick, jarring transitions to the next area. The story plays out like a basic episode of the show. This time, the gimmick is that an evil seer has stripped Korra of her powers, and you’ll have to earn each element back level by level. Every bending style has its own level system and sense of progression, and by the end you’ll have everything at your disposal.

Korra herself is a cool character, and tends to take a more hot-headed approach than Aang, the protagonist of the original Avatar series. She also has a pretty awesome friend in the form of Naga, a giant polar bear thing that you can ride during specific Temple Run-like sequences. Since the story bits are so short, you don’t get to see a lot of Korra’s personality, though.

Like any Platinum game, the devil is in the gameplay details. You’ll have light and heavy combos at your employ, as well as the power to use each element in tandem with one another — water serves as a projectile of sorts, fire allows for quick melee blows, earth is slow but powerful, and air is more of an area-of-effect element. Korra can guard and counter (when guard is pressed at the right moment) for extra protection, as well as dodge when needed.

All of this plays out like a “light” version of Platinum’s previous games. Combos aren’t as deep as the rest of the studio’s action catalog, and while everything is rather smooth, you can often rely on the same few moves to earn success. It works as advertised though, and the game’s visuals perfectly complement the smooth engine — it really looks like the show. The game also tends to bank far too heavily on counters, which wouldn’t be a bad thing if they weren’t so finicky. 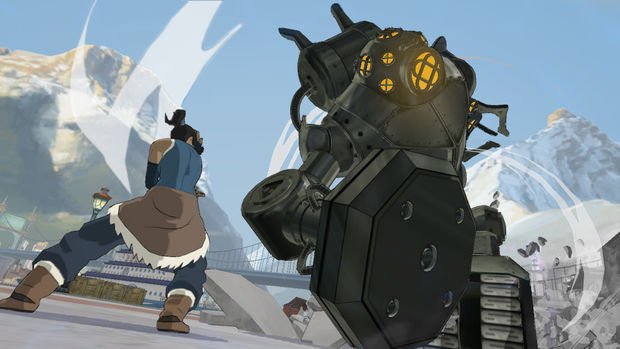 For one boss in particular, anything outside of counters will do a pitiful amount of chip damage. The only problem is he randomly queues up some non-counterable attacks (lightning-themed abilities cannot be countered in general), and sometimes it can take a few minutes to get the “right” randomly generated counter move. It’s not a huge deal considering these encounters only come around every so often.

Each chapter is broken up by small hub worlds, which are connected to challenge rooms of sorts, putting up barriers to block your escape. There’s not a lot of exploration — mainly short hallways to locate elemental chests to break (some of which force you to replay levels with new powers). There’s a small amount of platforming to master but not as much as I would have liked. Moderation is a recurring theme in Korra in that nothing is too frustrating, but nothing is too exciting, either.

As you play you’ll earn spirit energy, a form of currency used to buy health items and talismans from the shop. You won’t need any of these items though, as normal mode is fairly straightforward in nature. Sadly, you’ll have to complete the game on normal first before you unlock the Extreme difficulty. I get that it’s a show aimed at younger audiences, but it would have been great to have the option to start there if you’re a Platinum fan seeking a challenge. 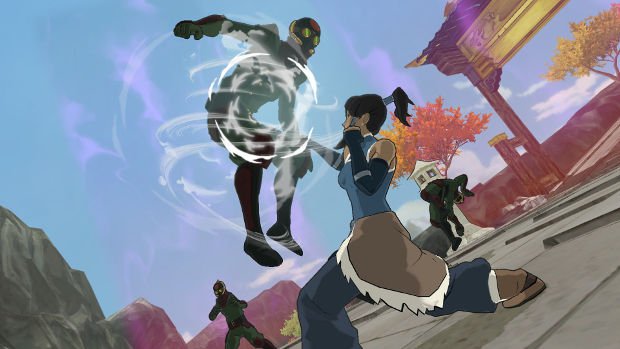 If you’re keen on replaying the game there are a ton of unlocks, especially if you go back and try to find every elemental chest. There are also new costumes, including one for completing Extreme. One playthrough will last you around four hours over the game’s eight chapters, and there’s a “Pro-Bending” league to play afterwards with different rankings — these are basically small arena-like encounters with special rules.

At the end of the day, I wish The Legend of Korra was a fully-featured retail release. While Platinum has done a great job in terms of delivering a solid action romp, the jarring cutscenes and open-and-shut story leave little in terms of replay value. Avatar and Korra fans will likely rejoice at the fact that they’re finally getting a decent game.