I fell madly in love with The King of Fighters XII the first time I played it. After slogging through the slow-paced, polygon-based KoF: Maximum Impact games, it was such a relief to see the series return to its roots. The game featured some of the best 2D graphics I’d ever seen, and a fighting system that felt familiar, yet offered plenty of opportunities for discovery and creativity.

Then I actually got it home, and I realized how much it sucked that the game had no story mode, the smallest roster in series history (lacking fan favorites Mai, King, K’ and many others), shoddy netcode, some balancing issues related to the new systems, and a load of other flaws and frown-makers. The core game was still fantastic, but the fine tuning and features that fans had come to expect from a full-priced retail fighting game release just weren’t there.

Much like Street Fighter III: The New Generation, KoF XII felt like a promising, half-finished first entry in a fighting game franchise that was just begging for a fully-featured follow-up. That brings us to The King of Fighters XIII, the game that does its best to give us the experience that KoF XII should have been in the first place. 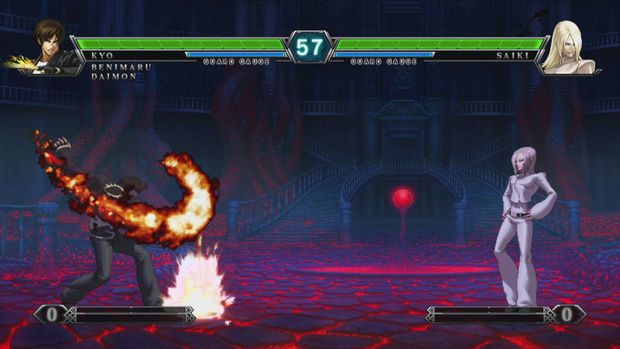 The King of Fighters XIII is an improvement on KoF XII in every way, but it still feels a little bit behind the times. With Super Street Fighter IV and Ultimate Marvel vs. Capcom 3, Capcom has set the new standard for these kinds of retail-based upgrades. Both titles feature ten or more new characters, new modes and systems, and copious helpings of re-balancing, all for $40. KoF XIII does the same, but for $10 more. Thankfully, the game does just enough to validate its slightly inflated price tag.

First up are the 11 new characters, including the all-new boss character Saiki, and ten fan favorites from previous KoF titles. Though it’s a little bit of a bummer that so few of the game’s new characters are really new, it’s undeniably great to see classics like Mai, Billy Kane, and King, alongside more recent KoF icons like K’ and Kula, make their upgraded debut in KoF XIII‘s breathtakingly gorgeous graphics engine. Sprinkled in are some characters that are old, but may feel new to many fans, like the forgotten Thai boxer Hwa Jai from Fatal Fury, and the karate master Takuma, who comes to KoF XIII equipped with all-new fighting styles. Though it’s still far from the largest KoF game to date, there are more than enough characters here to keep even the most die-hard KoF fan happy. 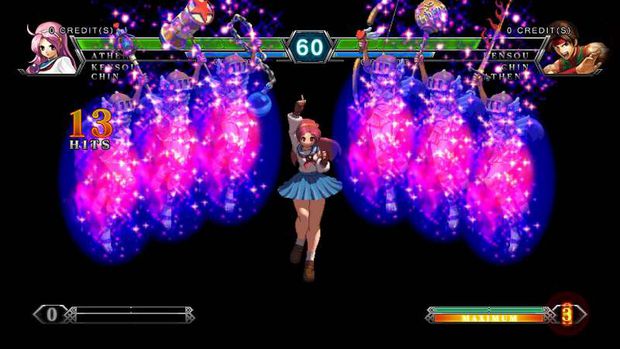 While KoF XIII adds plenty of characters to what SNK started with KoF XII, it also takes a lot away. The Guard Attack, Critical Counter, and Clash Systems have all been ditched, leading to a game that feels less easy to break and exploit. In their place, we have the Drive Cancel system (which allows you to cancel moves together, costing you some drive meter), the EX system (which allows you to throw out a more powerful version of a special, much like the EX moves in SFIII, SFIV, and the Darkstalkers series), and the Hyper drive mode (which allows unlimited use of Drive Cancels until your Drive Meter runs out).

What that all leads to is a game that allows for incredibly high levels of play, while making you work really hard to get there. While you may have a fair amount of luck activating a Custom Combo in Street Fighter Alpha 2 or X-Factor in Ultimate Marvel vs. Capcom 3 and just spamming special attacks until your meter runs out, you’ll really need to work to make Hyper Drive mode effective. The timing for canceling together specials and supers is extremely specific. Most of the time, your window for a cancel is frame-specific. If you manage to pull off one of the game’s many 20-hit drive cancel combos, it will be because you really earned it. 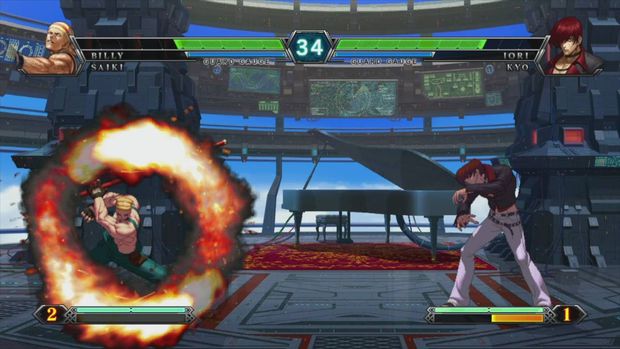 That system is a perfect fit for what KoF has always done best: offer an easier-to-learn-but-harder-to-master alternative to Street Fighter. While the game only has four attack buttons, the amount you can do in a KoF game dwarfs even the most complicated entry in the Street Fighter series. There are four different kind of jumps in KoF, which is just the start of your mobility and counter options. There are rolls, dashes, two types of power counters, get up moves, and much more. In KoF, you can basically get anywhere you want on screen at any time if you understand your character and can properly read your opponent.

Don’t be intimidated, though. If you know the basics of Street Fighter, like high/low blocking, half-circle and z-motions, and light-to-heavy attack combos, you’ll be able to pick up and play KoF right away. From there, though, there are gallons of KoF-specific gameplay mechanics to be learned and exploited. If you play KoF like Street Fighter, against other beginners, you’ll be fine. But beyond the most basic of matches, you’ll have to master the roll and the quarter-circle back, half-circle forward roll to keep your face off the floor. 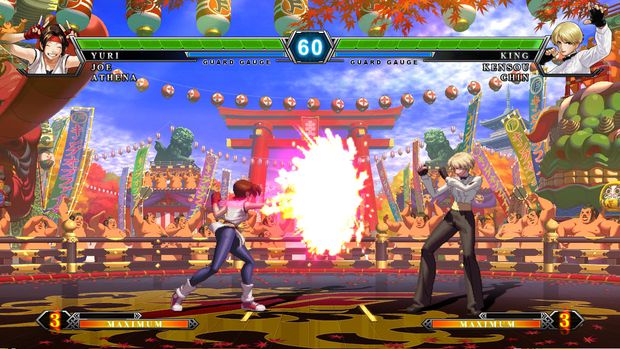 Another thing about KoF that has always made it different from Street Fighter is its focus on beauty. KoF XIII is easily the prettiest game in the series yet. This is the most fluid, detailed, and well-timed 2D sprite animation I’ve ever seen in a fighter. While I personally prefer the character designs and personality of the Darkstalkers and Street Fighter III games more, I can’t deny that in terms of pure technical craftsmanship, KoF XIII is the new champ of sprite-based fighting games.

That focus on beauty isn’t just a technical thing with KoF XIII; it spreads over to the character designs as well. While plenty of the KoF dudes definitely have their fair share of machismo going on (particularly the Ikari Warriors Ralph and Clark), just about everyone in KoF XIII is prettier than your average fighter, especially the guys. While Street Fighter IV‘s art direction focused on making even the slimiest characters chunky and muscular, KoF XIII goes in the other direction, making even the most buff tough guys slinky and stylish. The game has more exposed hairless pecs, perfect hair, and tight leather pants (revealing even tighter man-buns) than your average episode of The A-List: New York. Sure, the game’s female cast is attractive, too, but it’s the game’s selection of beefcake that makes it really stand out, at least in terms of character design. 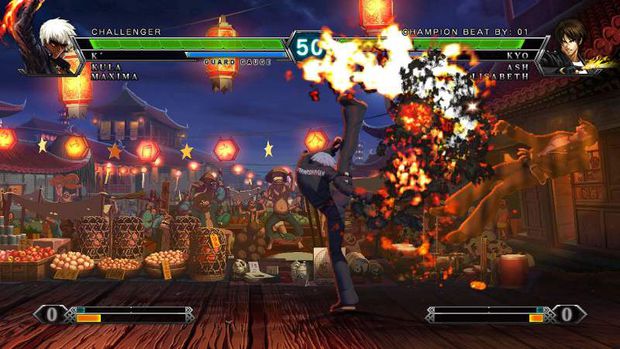 It’s nice to see so many bad-ass fighters play against type. KoF proves that, contrary to what some may tell you, there is nothing wrong with defying traditional gender roles while kicking some ass. That theme is exemplified by Ash Crimson, the main character of KoF XIII. At first glance, you’ll be sure that Ash is a woman, but upon further inspection, it’s clear that he’s something else, something beyond the idea of a “male or female.” He may not even be human, and as such, he’s not tied down by the rules of humanity. He’s not afraid to call a mademoiselle a maggot, or threaten to kill a friend, though in the end, he may be the only one who can save the world. Like the gender-defiant pop stars of the 1980s and ’90s, he doesn’t follow anyone’s rules, and that’s a big part of where his power comes from. In that way, he’s the perfect mascot for the KoF series as a whole.

Ash’s story is just a part of KoF XIII‘s strange narrative. You can get a condensed version of the game’s events in Arcade mode, or explore it in greater detail in the Choose-Your-Own-Adventure-style Story mode. Either way, you will see time stop, a giant demonic doorway open in the middle of a stadium, a very feminine man turn into a naked muscle-person, and much more. Then, when it’s ll over, you’ll be treated to a quote from classical poet Robert Browning. If you like surrealist, occasionally long-winded storylines in your fighting games (I’m looking at at you, BlazBlue fans), KoF XIII won’t disappoint. 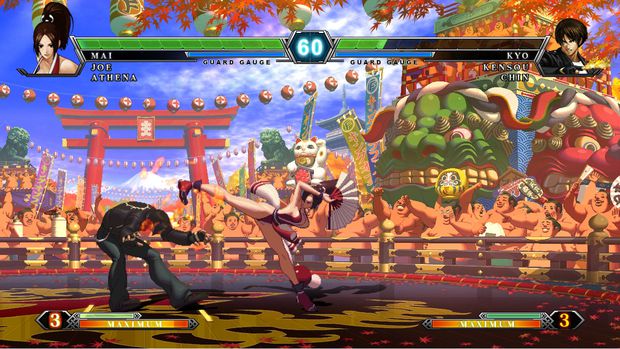 Beyond Story mode, the game is packed with tons of other content. There is an extensive customizing mode that lets you edit every single color in the character sprites (so yes, you can make some characters look sort of nude), along with Time Attack, Survival, Trail, and Training modes. There are also the obligatory art and sound galleries, and other little bonuses.

As for online, it’s missing the much-loved spectator mode that you may find in other fighters, but it’s still a big step up from KoF XII. I’ve played on a wireless connection, and I can say that every match I’ve played with three green bars of signal has been perfectly lag-free. Sadly, there have been plenty of times when the only opponents available were those with one red bar, which led to some sad, laggy disasters. I’m not sure that’s the game’s fault, though. We’ll see when the announced online patch hits in the coming weeks. 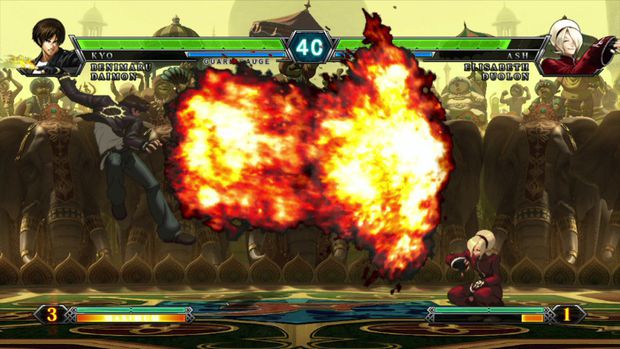 KoF XIII is probably the best game of 2011 for die-hard fans of traditional 2D fighters. From the incredible graphics, to the deeply detailed and difficult-to-master drive cancel combos, to the invigorating options for rushdown and retreat that come with every KoF title, the game feels like the most traditional, yet most skill-rewarding modern fighter on the market. Unlike the Street Fighter IV games, KoF XIII doesn’t make much of an effort to win over people who are intimidated by the fighting game genre. Instead, it offers a love letter to all the things that made fighting games a phenomenon in the first place. If you’re burned out on Street Fighter or Marvel Vs. Capcom, or are just looking for a more “back to fundamentals” 2D fighter, you’ll more than get your money’s worth with KoF XIII.