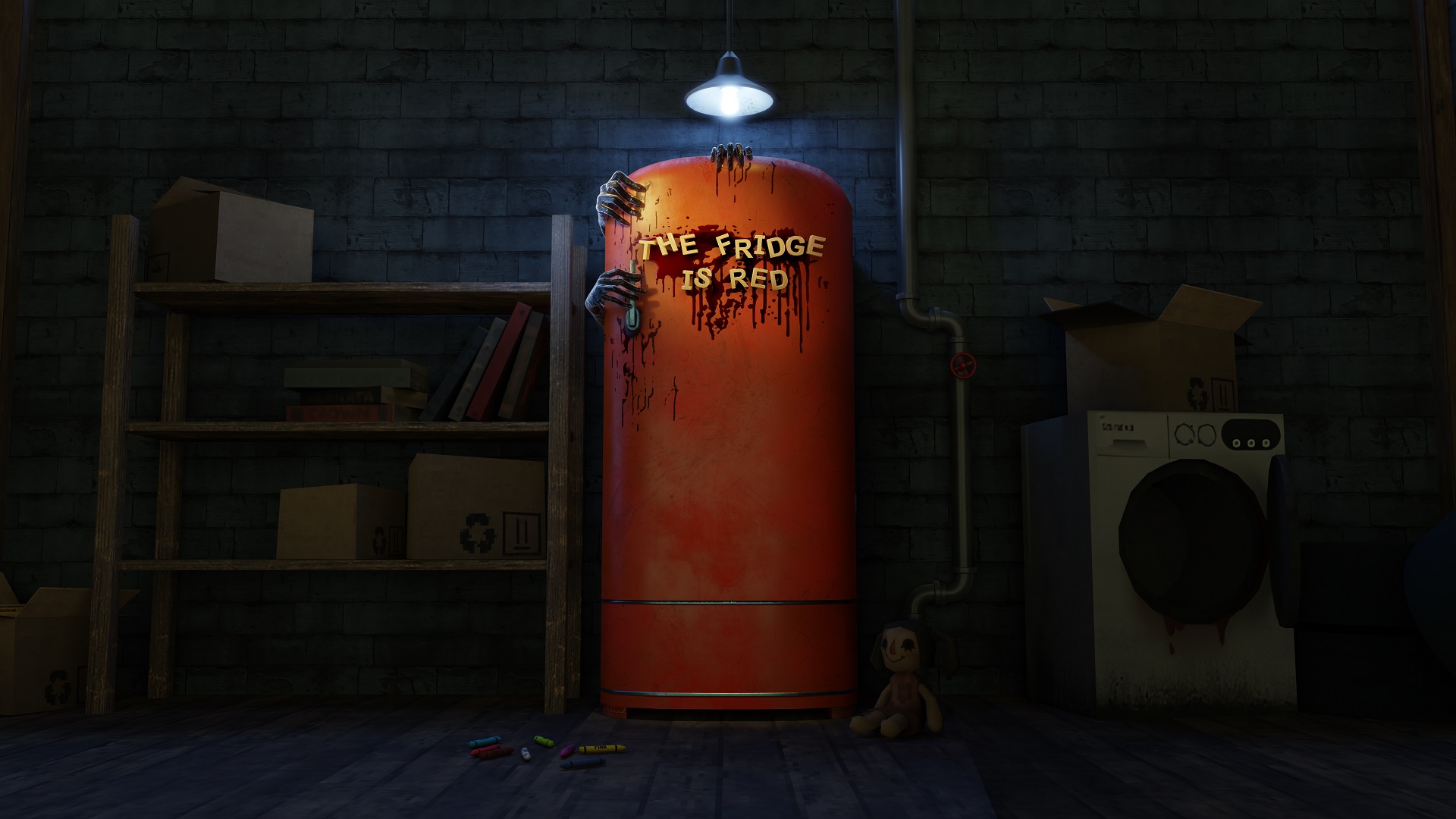 Is your refrigerator running? Then you’d better run faster!

Horror is a fun little genre. It’s like drama, but it tries to open up your bowels. And we, as humans, are afraid of so many things. Some things we’ve come up with on our own terrify us. Sometimes we’ve decided that things intended to cause joy instead cause fear. It’s great! You don’t even need something tangible, life itself is one long horrifying experience!

The Fridge is Red is a bit of a departure from the usual grotesque slasher horror I’ve been indulging in lately. It’s psychological beyond just, “look out, that cat has got a knife!” It’s downright surreal, nailing what dreams would probably be like if I could dream about something aside from noodles. Unfortunately, while it happens to be consistently arresting with its visuals, it comes up short with just about everything else it attempts.

You play as some guy menaced by a fridge. Not directly. It’s one of those passive-aggressive fridges that seem to show up in visions. And while this crimson monolith is omnipresent, that’s about it. It might eat people. Who knows?

The plot throws down its cards a bit too early. The Fridge is Red is about grief. Whether or not you’re living out this grief or merely reliving it is sort of left to interpretation. That’s cool and all, but The Fridge is Red simultaneously gives you too few pieces of the puzzle and too many.

The most frustrating part of its storytelling is how, when you conclude one of the game’s six chapters, it then replays them in a way that demonstrates how the events actually happened. So, while it’s vague about a lot of things, it also brazenly shows you what it’s symbolizing. I don’t know why. I like to think I’m just not getting something, but I’m pretty sure I’ve got the whole picture minus some questionable spots.

That’s cool, I guess. My fridge is white.

Where The Fridge is Red really succeeds is in its visual style. Yes, it’s a low-poly affair overlaid with a VHS filter, and that’s not particularly novel anymore. However, its use of lighting and purposeful obstruction of details are used pretty well. Furthermore, it also does well at being convincingly surreal. It comes close to being rather comical in quite a few cases, which only adds to this fever dream haze you’re stuck in.

I never found it to be all that scary, but there were plenty of moments that felt screenshot worthy. If nothing else, The Fridge is Red does some great atmosphere. The lonely gas station feels like an island in the darkness. The hospital feels sterile and impersonal. Then it gets intentionally confusing.

It really loves Lost Woods-style puzzles, where you have to follow directions extra hard to succeed. It’s effective, but it gets rather tiresome quickly.

Something stinks in the fridge today

Actually, the puzzles are tiresome in general. It really leans on the horrors of mundanity. At one point, you literally stand in line for a few minutes, just waiting for the ability to advance. I get why they chose to do it, but then later, you’re driving long, empty roads in the snow.

The Fridge is Red wants you to get lost. Four of its six chapters have you navigate some sort of maze. It’s also incredibly vague about what you should be doing. I’m a big enough girl that I don’t need it to hold my hand, but a little direction would have been nice occasionally. The snowy road chapter was the worst for it. Each path eventually leads back to the gas station, but only a specific route leads to where you need to go. At first, this is easy enough. The gas station attendant tells you where to go. Then nothing.

For the last stretch of the chapter, I was told “go here” as an objective, and then just started driving down the various roads until I hit the one it wanted me on. It takes a long time to get back to the gas station each time, the scenery is intentionally repetitive, and there isn’t even a radio. I was excited to get to that chapter and then was relieved to finish it.

I get all my best advice from appliances

The Fridge is Red feels like a lot of scenes that look really good in a trailer built around a game that isn’t interesting to play. Its puzzle design just involves finding a bunch of stuff to rub on other stuff, which is exactly what adventure games are, but they usually don’t feel like such a chore. In its attempts to tie in the horrors of mundanity, The Fridge is Red manages to make itself just feel mundane.

You can see greatness from the heights that The Fridge is Red reaches, but most of the time, you’re mired in its lows. At times, it feels like the central obstacle in the game is just trying to figure out what it wants from you. What order, what direction, and what interpretation you need to arrive at. There’s definitely vision here that wants to be delivered, but it needs to be paired with consideration for the experience.