The Forest is a survival horror game in a very literal sense. It has all the survival elements you’d expect, such as gathering materials to construct your base and craft items, to managing various stats such as hunger, stamina, and even sanity. But, it’s the horror aspect of The Forest that truly separates it from other games within the survival genre.

You play the unluckiest survival expert and father in the world, as your plane crashes on a remote peninsula and your son is kidnapped by a mysterious red figure. If that’s not bad enough, once you begin exploring your surroundings and searching for your son, you’ll soon discover this place isn’t so remote after all.

You may hear a few twigs snap behind you, maybe you’ll hear odd screeching in the middle of the night, or maybe you’ll simply stumble into one of their camps. Either way, you’ll soon be greeted by the mutant cannibal creatures that call this place home and who already made short work of your fellow plane passengers. It’s then what you do from there that makes this game special. 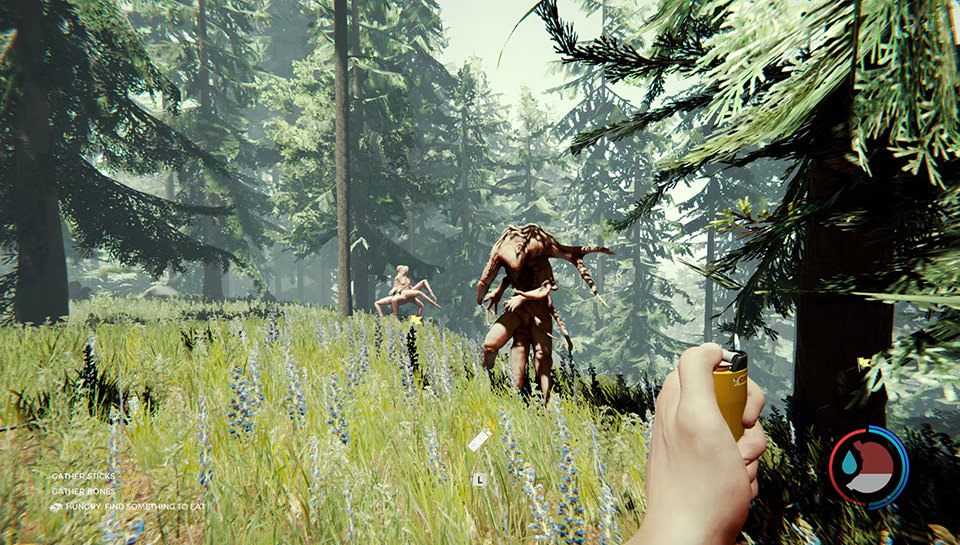 Generally, the survival genre puts the narrative on the back-end of priorities with a much larger focus on player-versus-player experiences or the actual survival mechanics themselves. That said, outside of the obvious horror aspect, one other relatively unique aspect of The Forest (at least within the survival genre) is that it thrives on its own narrative. This is a game littered with plenty of instances of great environmental storytelling. Things as simple as discovering a group of tents in the middle of the woods with blood trails strewn about, or potential clues in the form of crayon drawings from your son, to stumbling on the unfortunate remains of other passengers.

As obvious and crazy as it is to state this, The Forest can be completed and features a fully fleshed-out ending sequence, with the option for a few different endings as well. Which, in a weird way, was somewhat refreshing for me as someone who’s played far too many survival games that end with me getting bored due to the lack of an end goal. On the topic of building things, though, The Forest certainty still offers up that much and then some. Everything from a few preset cabins and tree houses you can choose between, or even placing down custom foundations and building from there.

Once you’ve placed something you want to build, it’ll give you a nifty transparent preview of what everything will look like, as well as a list in the bottom left corner for what’s required to build it. As solid as the building UI is, though, I can’t say the same for the rest of it. Navigating your inventory, for example, can be a real pain in a sticky situation since it’s somewhat of a cluttered mess, especially in the late game when you have a massive inventory.

You’ll also be doing all your crafting in the inventory space, by combining resources you find. Much of it is what you’d expect, such as combining two sticks to make a spear for example. However, there are plenty of other complicated designs such as bombs, a bow and arrows, or even different types of armor. On top of the crafting, you can also upgrade your weapons with various resources, such as placing teeth you find from mutant cannibals on your club to further increase the damage or combining bombs with tree sap to make sticky bombs. 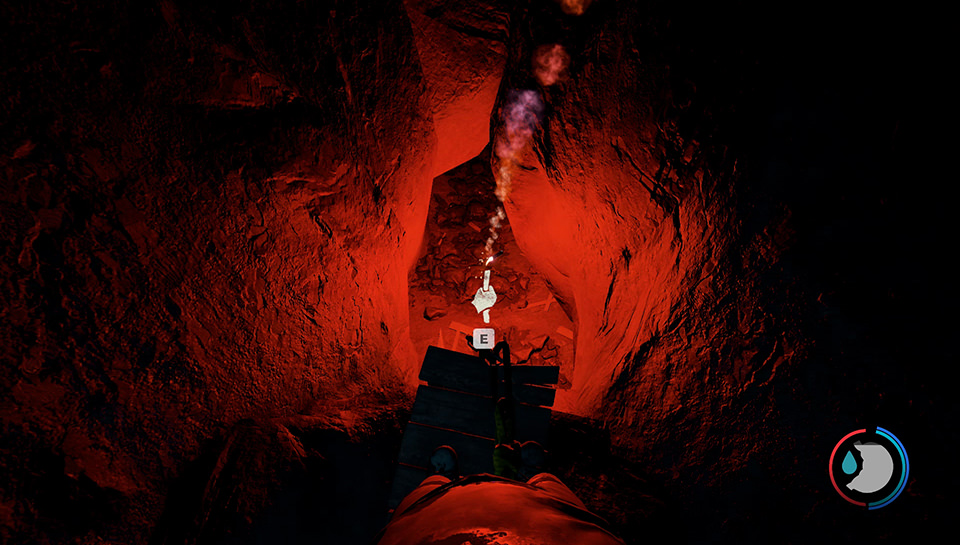 As solid as the building, crafting, and general survival elements are, the real star attraction is the cave systems. What The Forest truly nails with the caves is an almost tangible feeling of fear from being in the dark and unknown. All of this is aided by smart level design and terrifying sound design.

Overall, The Forest doesn’t feature much of any ambient music, but honestly, it doesn’t need any. When you explore the caves all you’ll hear is the sound of your own footsteps, your lighter, drips of water, rocks crumbling around you, and sometimes distant abstract noises deeper within the caves that are every bit as terrifying as you imagine them being.

The art direction matches this as well, with plenty of gnarly body horror and ghoulish designs for the mutant cannibals themselves. From the mud-covered ferals that run on all fours in the woods and eat one another, to the much taller gray-skinned cannibals that travel in hunting parties, or the heavily mutated cannibals reminding me of something straight out of Silent Hill. 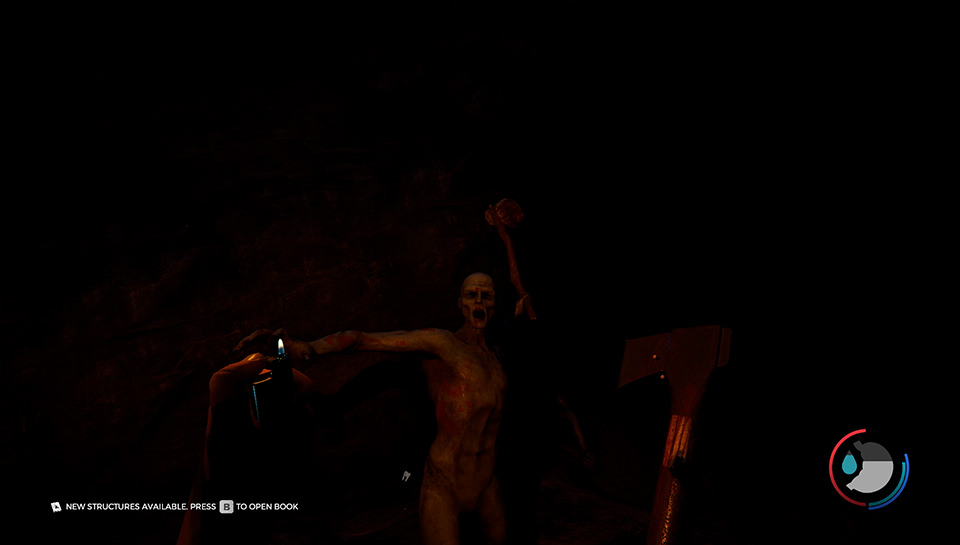 Best yet, the mutant cannibals have this very interesting characteristic where, early on, they’ll seemingly leave you alone and keep their distance, almost like they’re stalking you, only for them to become far more aggressive as the days progress. Throw all this in with the option for up to eight-player cooperative multiplayer and The Forest isn’t only a great horror game, it’s also just a fantastic time with a group of friends.

Positives aside, The Forest doesn’t only contain a bunch of hungry mutant cannibals, but also a fair amount of jank to go along with them. This can range from the odd crash, to sometimes the physics going completely haywire and objects suddenly flying off into the distance. But, it’s at its worst when the mutant cannibals themselves are dumb as bricks in combat due to bad AI. 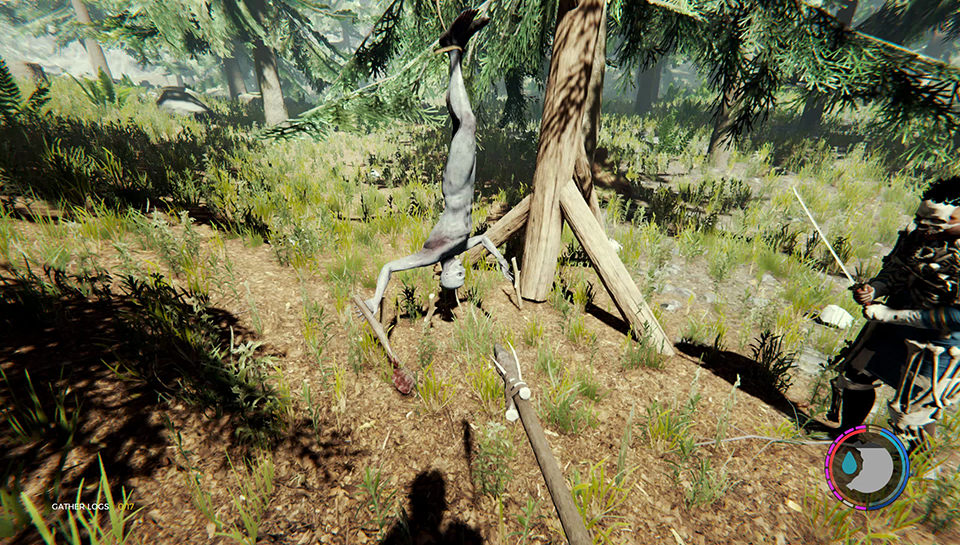 I had a number of moments where I could cheese my way through combat by simply standing on a large rock and hitting them with my spear without much issue. As terrifying as they are, they can’t seem to grasp heights or even knee-high walls for that matter. If you’re going to play The Forest, I highly recommend playing on a higher difficulty, especially for multiplayer.

Jank and sometimes dumb mutant cannibals aside, what Endnight Games accomplished with The Forest with only a team of four people is simply extraordinary. It’s one of the best survival games I’ve played in recent memory. Whether I was creeping my way through the woods alone at night or playing with friends during the day and showing the local residents who the true masters of their domain are, I haven’t played anything like this that’s been so fun and terrifying all-in-one in a long, long time.