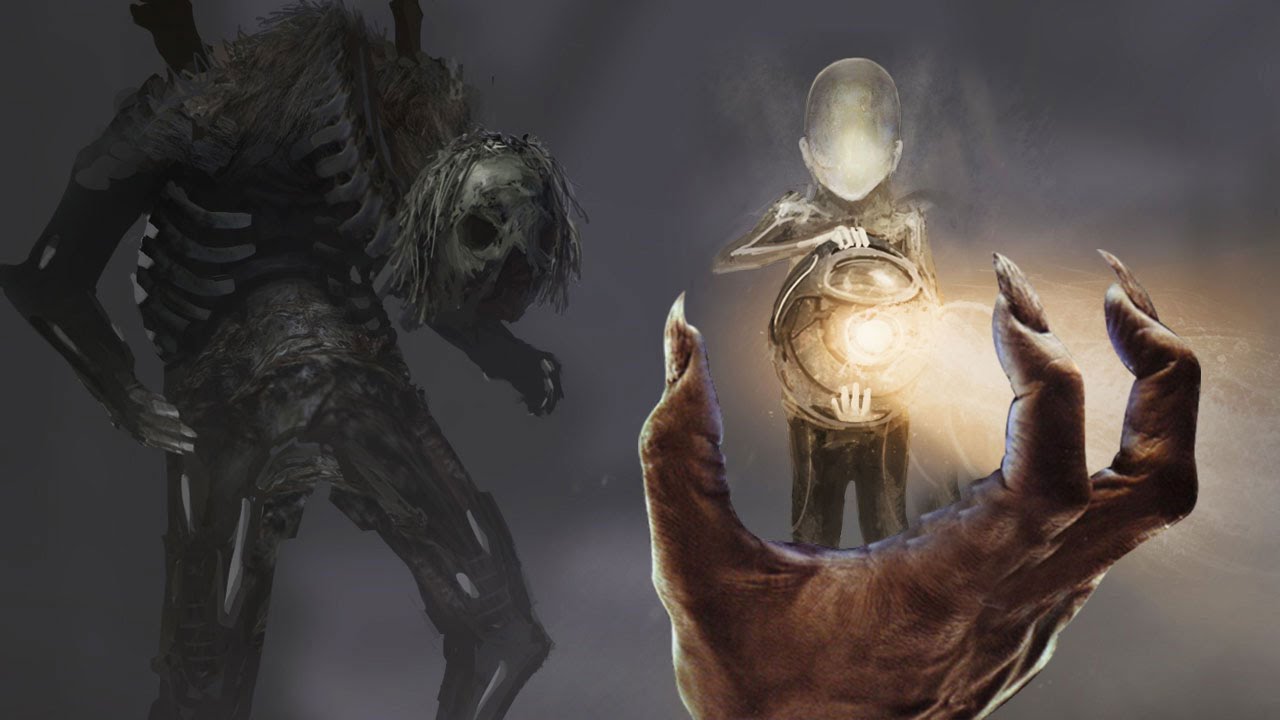 I’m a huge horror fan, and love to see any kind of innovation brought into the genre. Vogelsap’s The Flock has a Big New Idea that I kind of love: there is a finite pool of respawns for all players, and once it has been completely depleted, a final event will trigger before the game ceases to exist.

An asymmetrical competitive horror game where deaths have a meaningful impact could have merit. It’s a shame The Flock is paper-thin in every other regard.

If you’ve followed The Flock‘s development or seen any videos about it, you may have decided that it’s a digital version of flashlight tag. This is an apt comparison. The difference is that the flashlight (here called The Artifact) can immolate organic beings upon illumination. Each of the three to five players of the game play as the Flock, a skeletal alien race. These lithe beings crawl on all four limbs when they want to move fast, and can turn to stone when they stay completely still. They can also place decoys of themselves and later teleport back to said decoy once per life. Their final ability is a scream that can increase the speed and strength of nearby kinsmen.

When a match starts, each player is tasked with finding the Artifact as quickly as possible. Whoever finds it becomes the carrier, a being with less physical prowess than the Flock. Though you’re no longer able to jump, you can now incinerate players who attempt to kill you, since that’s their sole objective. While they’re busy trying to get the jump on you, you have to shine your light on markers spread throughout the three maps. Using the Artifact is simple. You have to keep moving to keep it charged, which I like since it promotes active footwork. The scroll wheel changes the distance and width of your light; you can have it wide and short-ranged or narrow and long-ranged.

While it can be satisfying to scorch one of your attackers, playing as a carrier never feels particularly exciting. The hide-and-seek antics grow weary after only a couple of play sessions. The first few times I played merely flirted with tension. I immediately found the Artifact and began searching for the objective markers, and heard footfalls behind me. I would turn around in a facade of panic and either burn a member of the Flock to death or find a stone statue behind me. You can’t hurt the statues, and sometimes it’s hard to discern if it’s even an actual player controlling the alien gargoyle since these stone effigies are littered across the stages. Wracked with doubt but driven by the need to reach my goal, I backpedaled to where I needed to go.

My more clever opponents would use decoys to circumvent situations such as these, but the vast majority of people I played with had no solution to me being able to watch them and move backwards. When playing with a full team, I’d usually be swarmed from all sides and this was less of a problem. Good luck finding enough players, though, as I usually was only able to find one or two people to play with at all times of the day.

And that’s the entire game. It doesn’t take long to realize that aside from a slight variance in player tactics, every match feels identical. If you tell a friend about an especially exciting round, you’ve told them about every round you will ever play. It doesn’t help that no aspect of The Flock seems to have been cooked long enough. I like the look of the Flock themselves, but the Artifact, the carriers, and even the environments exhibit all the fidelity of an early Half-Life 2 mod. If these were placeholder assets for an alpha build waiting for another layer of polish, I would understand, but these are the uninspired end results of Vogelsap’s efforts.

The stereo positioning of the sound is functional but every effect has an odd, muffled quality about it. Fortunately, the music doesn’t suffer from this same issue, but there’s not enough of it to ward off monotony. What hurts The Flock the most is that there’s very little to do, and none of it is entertaining. With only one game mode and three maps, you can see all that the game has to offer in two hours (and most of that time will be spent looking for willing players). It’s difficult to justify paying $16.99 for something that’s going to vanish eventually, and it’s even more difficult when what’s vanishing won’t be missed.

With over 200,000,000 lives for people to lose, it’s going to be approximately forever before we see whatever happens at the end. The Flock is a promising idea dressed in the blandest of clothes. It’s damning that I was convinced I was doing an Early Access impressions piece until I looked and realized the game had been released two weeks ago. This lack of content and polish is acceptable when there’s an implicit promise of more to come, but aside from a nebulous end segment that may take literal years to reach, this is all The Flock is and will ever be.