Kenan: Kel, I’m going to need some chicken wire, some beeswax, a rooster, a few rolls of toilet paper, and a 5-Iron. We’re busting out of prison today! 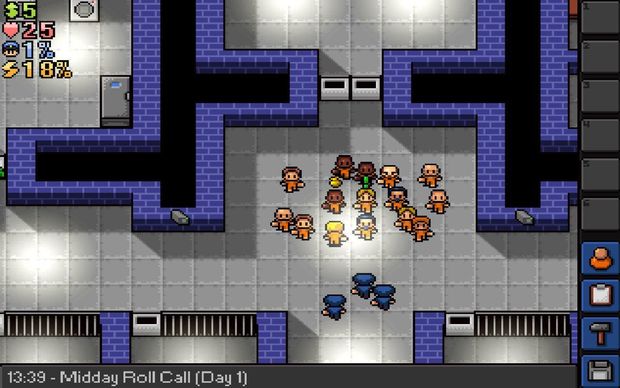 If you’ve ever seen the intro to Kenan & Kel, that’s basically how Escapists works. Your mission, if you choose to accept it, is to escape from prison by any means necessary. Whether you’re Shawshanking it or divining an elaborate Michael Scofield-esque Prison Break scheme, the prison is your oyster, as the game is very open-ended in nature.

It’s a puzzle game, plain and simple, with old school JRPG-like menus to boot. Using said menus you can pick up new gadgets, combine and craft, and check your statline. You won’t find a party with varying sets of skills though — you’ll have to escape all on your own, using the tools found within the prison and nothing more.

The tutorial is basically an elaborate ruse, providing an interactive step-by-step guide on how to break out of the intro lockup. It feels really easy at first, until you enter the first real stage and realize that pure entropy is the name of the game. Guard and prisoner routines are entirely different, there are more people to worry about, the vents aren’t automatically open like they were in the intro, and so on.

There’s so much going on at all times. The top portion of the screen basically functions as a ticker, showing you what activities you are expected to attend, including lunch, exercise time, and any and all job requirements. Nearly all of these have a small minigame of sorts, and boost your stats just like a classic NES Final Fantasy would. You can also converse with inhabitants and do favors like giving beatdowns for cash, or call upon favors yourself. 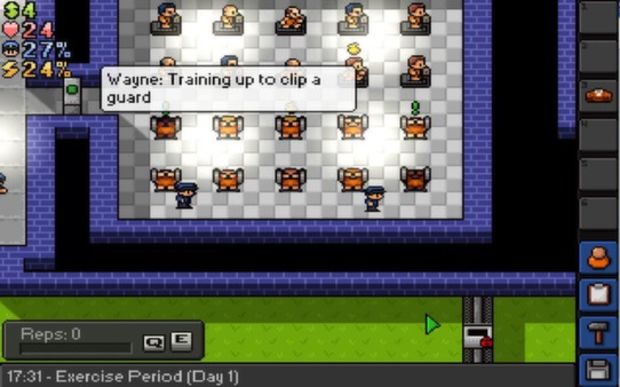 Conversely, you can also be on the receiving end of a beatdown or get fired from your cush job. When that happens you may find yourself losing some advantage you had previously gained, like access to the laundry room where you work, which would have allowed you to snag a guard’s uniform. You’ll also be able to move about the prison freely if you have the tools to unscrew vents, and the power to move furniture around to get to hidden areas. The crafting system is fairly in-depth, but thankfully provides you with recipe lists once you’ve concocted the item of your choice.

Hiding items is a key part of the game, but shakedowns can screw you if you aren’t careful. To add to the madness, you can visit other cells to overhear conversations, and random events like riots will happen around you. The game can get pretty insane, and each playthrough is inherently different. Escapists is fun when you win, and fun when you fail. It’s a joy to slowly figure out what works and what doesn’t.

While everything may not go according to plan and you might wake up in the infirmary bed with a terrible headache, the game is fairly forgiving with your follies. All your items are going to be confiscated after “death” and progress on certain activities is reset, but you can’t really “die” in the traditional sense. I’m half and half on this design decision because while it does make the game easier, it makes failure less maddening — just pick yourself back up and try again, sans menu clicks.

The main problem I had with Escapists is that there is barely any emotional connection present throughout the experience. While it was often funny, presenting hilarious situations or dialogue reliant on specific inmates, you’d be hard pressed to feel anything else if you aren’t a hardcore puzzle fan. A lot of gamers are going to get plenty of satisfaction over flushing items down the toilet or going through the paces of normal prison life while they search for vulnerabilities, but a lot of the mundane routines are just that — mundane. 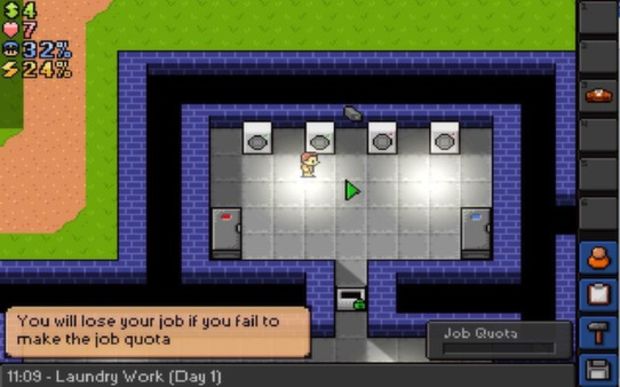 Some of the later prisons (a Gulag, a medium security location, a jungle compound, a rough Federales prison, and a supermax) will test the resolve of some of the greatest strategy enthusiast due to their complexity. I’m sure that within due time there will be min-max oriented strategy guides out there detailed every exploit and the “fastest” or “best” way out of each scenario, but the entire point of the game is to come up with your own plan and see it through. It’s kind of like Monaco in that sense, another polarizing game I adored.

The Escapists is a game for a certain kind of player. If you love the idea of getting thrown on a desert island and figuring out how to survive for days on end, you’ll probably enjoy it. If you find that prospect trivial, knowing that a lot of that time will be spent doing menial tasks, you may not enjoy it. As for me, I think I’m going to go back to Escapists for quite a while whenever I need to brush up on my puzzle skills simply because of how open-ended it is.