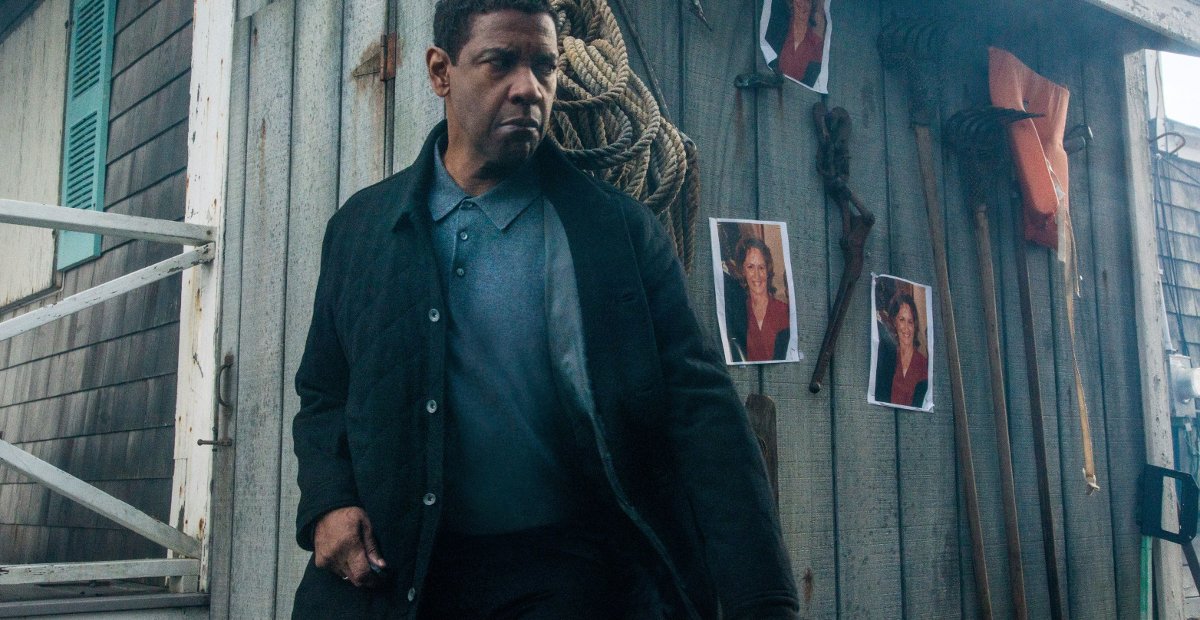 There’s a scene in Sony’s The Equalizer 2, the follow-up to 2014’s rather enjoyable original, wherein Denzel Washington’s Robert McCall breaks into a drug den, beats the holy hell out a few guys and pushes his way into a room with 8 or so gangster-acting-and-looking dudes. He’s got a pistol in one hand and an Uzi in the other, arms crossed at the wrists to offer full coverage and threat of death to all. One of the toughs says, “Who are you,” and McCall, aka the titular Equalizer and former CIA black-ops agent says, “I’m your daddy, your mama just never told you.” It’s the high point of the film. It’s vintage Equalizer. More importantly, it’s vintage Denzel. I laughed. Everyone in the audience laughed. It was what we’d come to see. Unfortunately, it was nearing an hour into the movie, and it was the only point in the film that made anyone emote at all.

When I say it was the high point, not only do I mean it was the best, I mean things went downhill from there, and fast, before crashing into an indecipherable mess at the bottom, a quagmire of nonsense that has so little logic or written cohesion that I literally shook my head like a man much older than me might when talking about his lawn, those damned kids and how things were in his day. It’s that dumb.

So where’d they go wrong? Antoine Fuqua’s back in the monogrammed chair, helming this coffee additive sounding sequal. Denzel is, despite the relentless ravages of time, still the same Denzel. Robert McCall is this antihero pulled straight out of the Taken playbook. He’s more observant, better trained, cleverer, faster, quicker, smarter and more capable of killing people than anyone else. He’s a gnarly dude with a moral compass that’s basically dead center. Meaning, it’s OK to revel in his violence.

But this is a sequel, and sequels, despite the gold-plated elephant in the room, need reasons to exist. Predominantly, these reasons come in the form of story and plot. Much like their more fun counterparts, original films, sequels rely on writing to exist. Without a story, sequels fall apart just like any film. Generally speaking, with a character that’s a man of mystery (no, not the shagadelic variety—think more Clint Eastwood’s William Munny from Unforgiven) there are two obvious paths. Continue the story of the original (easy and smart) or attempt to explain their mysterious and complicated past (difficult and unintelligent).

The Equalizer 2 chooses the not smart route. Taken didn’t change its formula throughout all three films, even if they didn’t quite capture the magic of the first. Nor did John Wick, ultimately, although it expanded upon the rules, codes, and factions in the world of assassins that the original only hinted at.

The film opens with McCall in Turkey. He’s tracking down a kidnapped girl and her abusive kidnapper father. They’re on a train with a bar car, yet the bar is closed—already a bad sign. John Wick McCall looks at his electronic watch and starts the stopwatch function. Everyone in the audience sits up in our collective seats because that’s the sign that there’s sixteen in the clip and one in the hole and Robert McCall is about to make some bad guys turn cold. Only, then the film’s in Boston. Now Washington. Now Brussells. Now Washington, Boston, Brussells, Washington again, and so on and so forth. It jumps around from place to place with little to no effort other than the superimposed text telling us that it’s happening.

They’re trying to build the new story out that’s necessary to make the film work. First, they create a one and only true friend for McCall, and then they kill her off because McCall needs a greater purpose to continue to kill people. But who cares: the film, despite a few moments of vigilante inspiration, is slow. It drags its old ass feet for long stretches. Because, again, a new story needs to be created. McCall bonds with a young kid in his apartment complex, much like he did in the original Equalizer, only here, since a friend is dead, we know the writers are just creating a plot prop—someone bad guys can exploit. For McCall to care about the kid enough to justify that, it requires a lot of screen time, screentime not dedicated to action, and gents, in a movie that’s following the Taken playbook, non-action-sequences are the equivalent of tedium and boredom.

The final act does have more action, but things make so little sense, it doesn’t matter. It’s epitomized by a hurricane that comes out of nowhere. Suddenly McCall is driving across a wooden bridge to an island town that’s mid-evacuation to lead the bad guys into a trap. The bad guys follow him because they never saw Home Alone: you don’t go into the fun house.

The bad guys fan out in army formation, despite having previously acted like assassins and black ops specialists. They suddenly spout jargon on headsets they never previously used like “I’m taking the high ground” and “don’t I look good in my flak vest.” How is a man climbing on top of some weird tower with a sniper rifle going to accomplish anything in the middle of a hurricane in the midst of an entire abandoned town? Literally, no one has any idea, including the character who does it—by the end of his time there, he’s gone from a highly trained hitman and cool operator to a raving lunatic who’s swearing at the sky.

McCall’s not a lot better. He pulls a Dexter and starts hanging pictures of his dead friend all around town. When did he have time to do that and other fascinating questions like how does shooting a cop with a silenced weapon help “tie up loose ends” (the motivation for pretty much all the deaths or attempted killings in the film)?

It’s funny because if anyone involved in the making of the film had been as concerned with tying up loose ends, we’d probably have had a better film to enjoy.