Episodic gaming was championed by Valve, but after no sign of Half Life episode 3 or even any SiN episodes after the first one (remember that?) it was Telltale who showed gamers that the episodic method of distribution could work with their revitalising of old adventure game classics.

Now Swedish indie team Cockroach Inc has released the first chapters of its adventure game The Dream Machine, a mix of traditional point ‘n click gameplay and a lovingly hand crafted visual style. With 3/5’s of the game currently available, will you be tempted to wait for more?

First of all, I need to point out that my review copy only features chapters 1 to 3 of the full five chapters that will be available. These are the only chapters that are available for purchase through Steam and via the game’s website. There’s no official release date for chapters 4 and 5 yet.

The Dream Machine’s story centres around Victor and Alicia Neff, a young and married couple who have just moved to a new apartment in the city from their former country abode. Whilst settling in, Victor finds a cryptic note that sets him on a path that puts the couple in danger, as they uncover the secrets that lurk in their new home. There’s a real believability to Victor and Alicia’s married life; at one point Alicia asks her husband if he would like “the truth or some appeasing bullshit” in relation to a simple question. 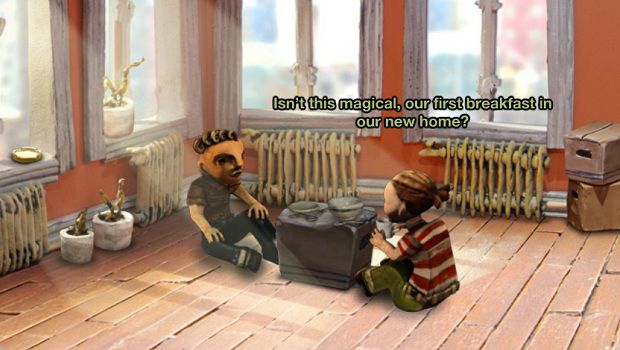 The Dream Machine is neatly split into three chapters so far. The first concerns uncovering the mysterious origins of the house and it’s owner, Mr Morton. Chapters 2 and 3 involve Victor travelling into the dreams of various people in order to rescue them from a malignant force. Chapter 1 does well in establishing the characters and the story; Chapters 2 and 3 transport Victor into some imaginative dream scenarios with some striking imagery. Whilst Chapter 1 is feels fairly short, mainly due to it’s easy puzzles, Chapters 2 and 3 increase the difficulty despite their limited playing areas.

It’s also where the game falls into some of the usual trappings of an adventure game. Whilst Chapter 2 is fairly straightforward, Chapter 3 introduces sub-tasks for Victor to solve, like hunting down ingredients for cocktails and figuring out a way to teach some unruly kitchen staff a lesson. Unfortunately this means Victor’s inventory becomes bloated and quite unwieldy. There’s also an overabundance of dialogue options; often five or more are available to Victor, but it feels like a lot of that could be streamlined. There’s nothing wrong with the dialogue — it manages to make superficially similar characters in Chapter 3 stand out from each other — it’s just that there’s an awful lot of it. Dialogue trees will nest even more options and this feels a little overwhelming.

Whilst the a large chunk of the puzzles in the game are the usual “combine items” and “give combined item to person” type of challenges, they never became same-y or predictable, until later in the third chapter where I felt I was trying to solve a particular puzzle purely by trial and error. Likewise, a few puzzles are composed of talking to various people via an intercom, which mixes in an amount of trial and error with a lot of dialogue options. The 3rd chapter of the game is probably the most involving but it feels a little over long. 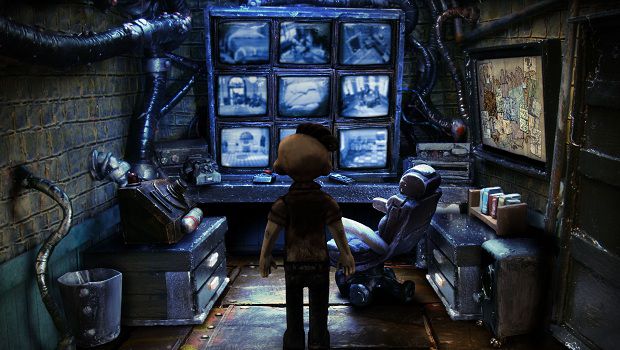 Like many of the recent adventure games, such as Yesterday and The Book of the Unwritten Tale, this is a very standard point-and-click game. Items are collected and stored in your inventory at the top of the screen. You’ll interact with other characters in the same way, clicking to speak or just engage with them. Whilst there is no way to highlight objects, the areas in the game aren’t over-filled with useless objects cluttering up the screen. There’s some nice touches in the UI; a pair of footsteps will show where Victor can walk to and any object you hover over will display a description at the bottom of the screen.

Then of course there’s the look of the game; it’s no understatement to say that The Dream Machine really stands out from other titles, and not because of its high resolution graphics or highly stylised pixel art. Rather, the game’s graphics are all sculpted from hand made materials and are stop motion animated. There’s an almost child-like quality to the visuals, as if the landscapes and characters are toys that have been willed into life. When there’s a close up of an object or an item, you can see the imperfections that come with being handmade; port holes aren’t perfectly round, there’s finger prints on clay, the clouds are clearly cotton wool. Yet this all adds to the charm of the game, and it shows that a clear love and craft has gone into The Dream Machine.

Whilst I had my issues with some of the puzzles and the pacing of the last chapter, I still really want to see where this story goes. The Dream Machine has it’s hook in my mouth, and I’m really excited to see the dreamscapes that are conjured up in the next two chapters.