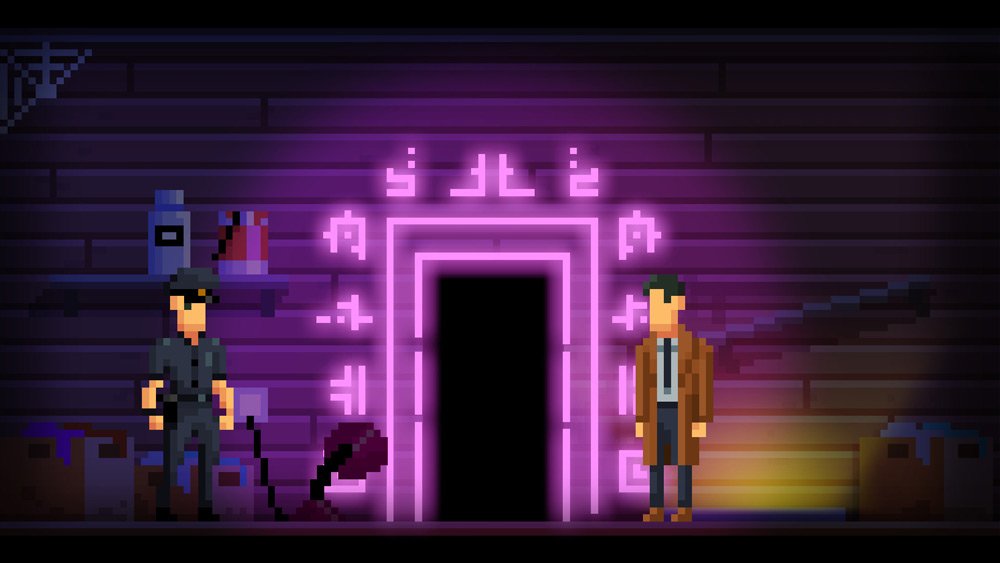 Twin Peaks Twin Falls has itself a bit of a menacing problem. Portals to an alternative world known as the Darkside have been popping up around town. The normal police force isn’t equipped to handle this issue, leaving only Detective Francis McQueen and dumbass Deputy Dooley to figure out just what the hell is going on in a game created by people who would like you to know they watched television and movies in the ’80s and ’90s. 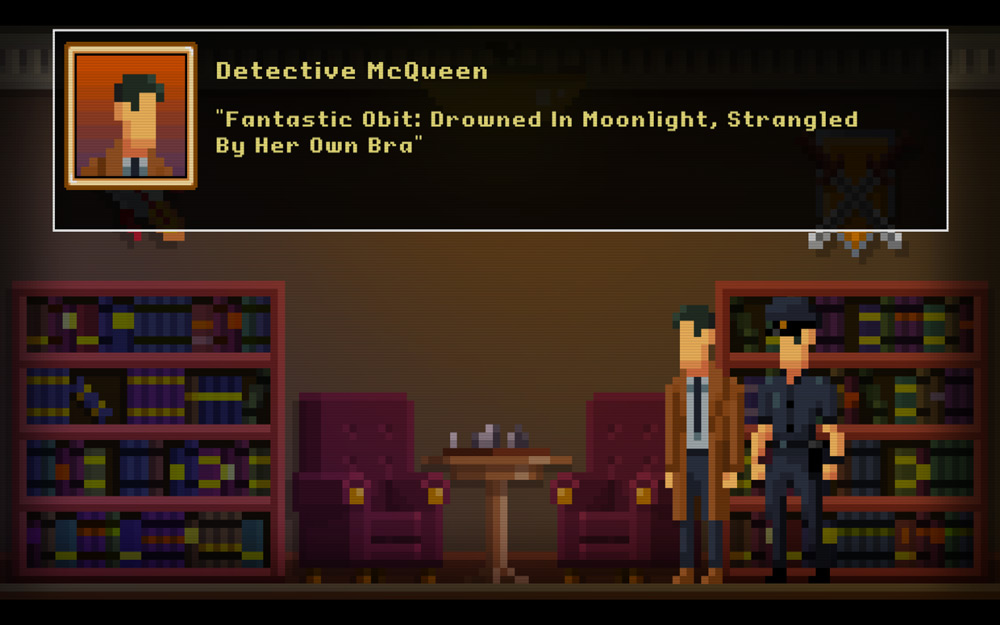 Pop culture references are as abundant as clickable objects in The Darkside Detective, the point-and-click adventure game from Spooky Doorway. Through the game’s six cases, I guide McQueen and Dooley through condensed locations around Twin Falls dealing with the Darkside problem as well as random, bizarre cases. As a point-and-click adventure, the solutions to its puzzles are based in easily comprehensible logic. To put that another way, as soon as I find an item it’s never a mystery on how I’ll use it. Each item has a single task and so long as I find every object I need, solving each case is a snap.

In writing this review, I have the game running in the background on my computer because the music is so damn good. Ben Prunty, the composer of FTL, StarCrawlers, Gravity Ghost and more, does not disappoint. His compositions set the ideal tone throughout and I find myself annoyed when the clicking of my mouse takes away from the absolute audial amusement. I could enjoy The Darkside Detective with my eyes closed but that would rob me of an art direction I am in love with. Big blocky pixel graphics isn’t a style I see very often and, on the retina screen of my MacBook Pro, it looks stupendous. Many scenes of this game are wallpaper worthy and it is hard for me to choose exactly which screengrabs I want to use in this review because they’re all perfect.

I love looking at this game, I love listening to this game, and its no-brainer point-and-click design means it’s a cinch to play. So why don’t I actually like it?

Adventure games live and die by the quality of the story being told. Going into this, I read the description on Steam and it is made quite clear this isn’t a serious game. It’s a roughly three-hour experience that is supposed to be chuckle worthy. The script has jokes by the dozen as nearly every character has a quip, pun, well-known reference, one-liner, retort, or clever remark; most of which land with a thud. This isn’t a subversive or satirical take on the detective genre; it’s more Chuck Lorre’s Twin Peaks. Yes, I know that’s kind of a dick thing to say, but when characters start with the ghost masturbation jokes, it’s all I can think.

The titular Darkside is neither fully explored nor properly detailed. Its bounds are never established and while refusing to have a rulebook for this otherworldly place might lead to a modicum of creativity, the few moments I spend in it are far too mundane and rote. There’s no world-building here, only references to more popular properties loosely stapled to the tried-and-true adventure format.

The people behind The Darkside Detective obviously know how to make individual parts of a game. The artwork is splendid, the music should be on rotation on my iPhone, and, barring a few bugs, the easy-to-grasp point-and-click gameplay works. Its issues lie in the writing, the element that should be the glue that holds the package together. Its lightweight, cornball comedy opts for cheap and easy jokes I never really find funny. I’m not expecting the brilliance of Rex Stout with every word, but maybe aim higher than something I’d read on a Bazooka Joe wrapper.