Getting stuck in an adventure game is one of the most frustrating experiences in gaming. When you’re playing a platformer or an action game of some sort, you’re usually tested in your reactions and your command of the mechanics. In an adventure game, you’re at the mercy of puzzles designed to test your problem-solving skills and when those skills fail you, it’s maddening.

The Dark Eye: Chains of Satinav is an old-school point-and-click adventure game that will make genre enthusiasts happy but may leave adventure game newcomers cold. 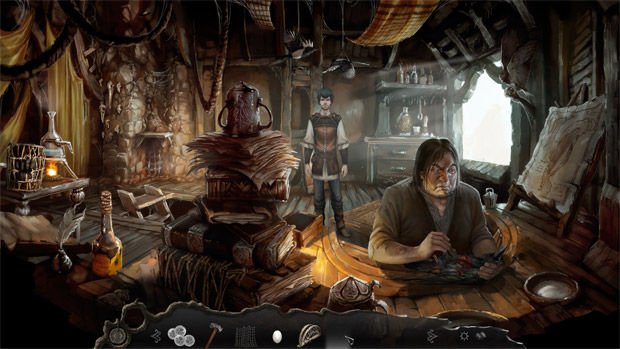 Chains of Satinav is an adventure game set in the The Dark Eye fantasy universe which has included the RPG series Realms of Arkania and Drakensang. The Dark Eye: Chains of Satinav is the first point-and-click adventure game set in the universe and it’s the first to be developed by Daedalic Entertainment, the makers of A New Beginning and The Whispered World. The setting is fairly standard Western fantasy RPG and whilst the usual tropes like Dwarves and Orcs are present, they’re underplayed to a large degree.

Chains of Satinav’s story concerns Geron, an apprentice bird catcher who is shunned by the citizens of his home city of Anderghast. Geron has a slight magical talent and seemingly a nose for mischief, which means he’s the subject of scorn and rebuke from almost everyone in the city. Geron’s luck seems to change for the better when he wins a contest and is put in the service of the king but a rash of murders and the imminent return of a supposedly dead, blind seer leads Geron to seek out a fairy and try and avert disaster for all of Anderghast.

Geron is a fairly typical, down-on-his-luck adventure game protagonist — ungainly, prone to saying the wrong thing and forced to rely on his (really your) wits. Accompanying Geron on his journey is Nuri, a fairy whose link to the fairy realms has led her to be hunted by the forces of darkness. Nuri is your stereotypical fish out of water; within minutes of getting her back to Anderghast, she’s caused some trouble due to her naivety, which becomes a running theme. 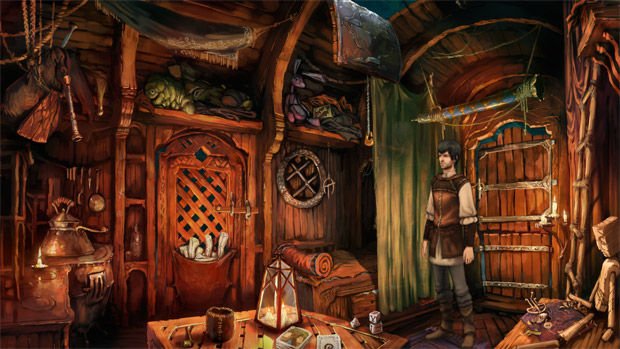 The Dark Eye: Chains of Satinav controls just like you’d expect a point-and-click adventure game would but with a few interesting additions. Firstly, you’ll learn to right click on almost everything because simply left clicking on an item sometimes isn’t enough to either interact with an object or pick it up. There were quite a few times — as the friendly guys at Daedalic Entertainment can attest — I couldn’t find the solution to a puzzle because I was simply left clicking all the time. It’s no game breaker, but it was frustrating once I realized my mistake.

There’s an interesting addition to inventory management in the game; when you select an item from Geron’s inventory, you can use the mouse wheel to scroll through all the items in your inventory. It’s a nice change of pace from having to constantly go back and forth from your inventory when you’re trying to find the right answer to a problem. The final gameplay hook is Geron and Nuri’s magical abilities: Geron has the power to break fragile objects without touching them and Nuri can repair broken items. These abilities add some interesting variety to some of the puzzles, but Chains of Satinav still falls into some of the same annoyances that have plagued adventure games for a while now.

The game has a difficult opening chapter, spanning a number of areas with multiple characters and puzzles. Whilst later areas confine you to a single location, the start of Chains of Satinav initially felt overwhelming, especially as you’ll end up with an inventory full of items that end up being taken away from you when Geron proceeds in his quest. There’s still some large areas, like the harbor, where Geron and Nuri meet the merchant Harm; just getting on board the ship becomes a chore. Even with all the items needed, Geron must then decipher smugglers speak which then requires completing yet another task. 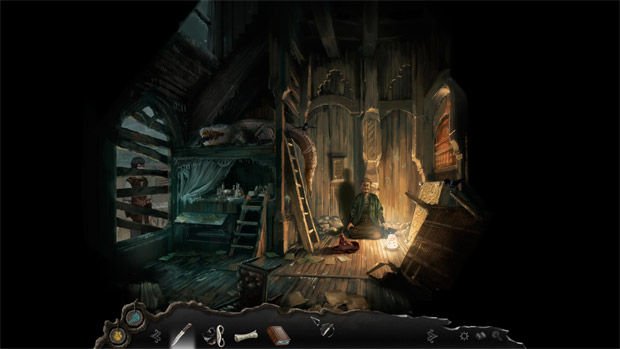 Chains of Satinav is a good-looking game, but it’s unfortunately inconsistent. The levels and characters have a wonderful hand-painted style and some scenes, especially in the fairy kingdom, look especially beautiful. The game flits between a few different cutscene aesthetics too; most take the form of a monochromatic scene between locations with an accompanying voice over. Geron has frequent flashbacks and dreams that are cast in a murky brown light. Sometimes there will even be a cutscene just for doing a simple action, like removing some planks that were boarding up a window.

The Dark Eye: Chains of Satinav offers a much bigger challenge than most recent adventure games, even with its streamlined features. Despite the much appreciated highlight-all-objects function, the puzzles are still challenging and this is a game that will take even point-and-click enthusiasts a while to complete. Newcomers, however, may find the steep difficulty too much and if you don’t click with the characters and their story, then you may find Chains of Satinav just too overwhelming and frustrating.