Few games have left an impression on me like The Banner Saga. Most games finish with a bang, a giant climax where evil is vanquished, peace is returned, and victory is savored. But Banner Saga, with its tale of weary viking nomads trudging across a shattered and broken world, all presented with a stunning Don Bluth-style animation, didn’t do that. When it was over, all that was left was a quiet sadness, a melancholy recognition that sometimes things just can’t be fixed even when you try your hardest.

How do you pick up and move on from such a depressing note? You don’t. Which is why The Banner Saga 2 wisely leans into it. From its narrative to its battle system, Banner Saga 2 is a game about perseverance, of pressing on when everything seems hopeless, of doubling down on grit and making the tough calls necessary to make it one more day. It’s just as melancholy as the original, but also strangely beautiful.

Unlike many sequels that take place in the same world separated by large gaps of time or momentous events, Banner Saga 2 begins exactly where the first one left off. With the ability to import your past save file and have decisions, deaths, and even items carry over to the sequel, you could play them like two big episodes in one story if you so desired.

Don’t let that scare you off if you didn’t play the original though. Stoic has made jumping into the sequel easy with a stylish cinematic recap that can bring you up to speed. Your starting party is even granted a smattering of items and stat boosts so you don’t feel like you’re starting completely outgunned compared to players who have a treasure horde of great items from the first game.

The overall formula remains much the same. It’s all about traveling a grim, dying (gorgeously illustrated) world with your exhausted group of survivors, trying to make the most of your meager supplies while making heart-wrenching decisions at every turn.

The Gods are dead, their petrified corpses now just used as landmarks. The cold winter sun has stopped in the sky, casting an eternal pale light on a dreary world. Your people are hungry, tired, and on the brink of desperation, but there is no succor or mercy to be found.

If the first game was nearly unbearably dour, Banner Saga 2 plunges into full-on hopelessness. The world is dying, your friends are dying, and there is little to be done about it other than to hang on and try to last another day. The tone is reflected in the two-pronged storyline that splits the attention between the surviving Banner Saga 1 protagonist of your choosing, and the gruff leader of a mercenary company named Bolverk.

Depending on your playthrough of the original (or choice at the beginning of the game if starting fresh), the “main” caravan will be led by either the grief-mad Rook, or his struggling, overburdened daughter, Alette. Only one of them can make it out of the first game alive, and that loss reverberates through the plot of the sequel.

If he survived, Rook is no longer the well-tempered, reluctant leader you knew. Instead he is a near-suicidal wreck who will take reckless chances with his own life in battle (flatly called out as a deathwish by friends), sometimes starting battles in precarious positions away from the main party, or getting into fights his more diplomatic daughter can avoid. That’s not to say Alette doesn’t face her own challenges. If chosen as the protagonist, Alette faces a responsibility that even she doesn’t believe herself ready for and unending challenges and grumblings to her command. 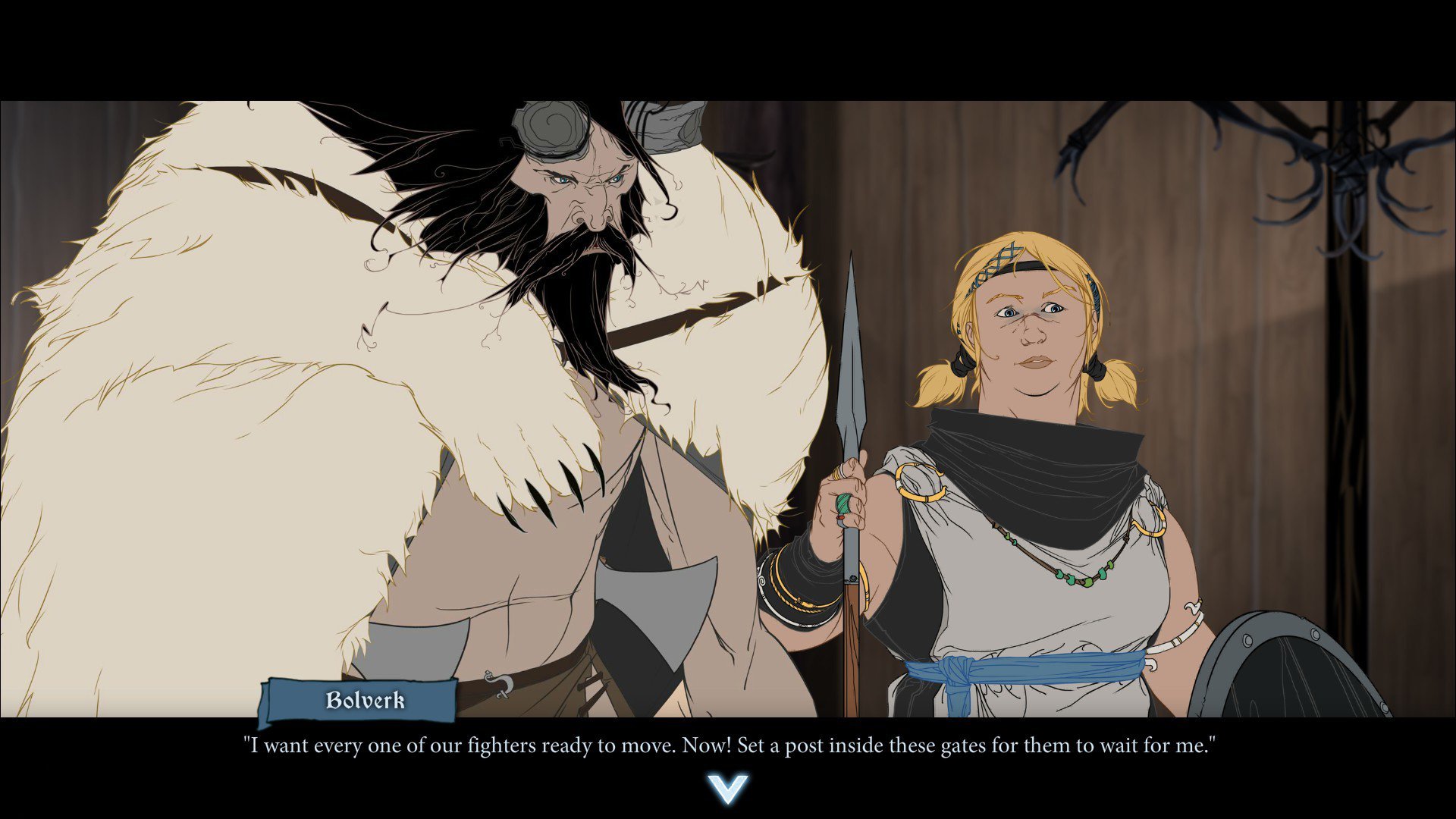 This is a problem that Bolverk, leader of The Ravens mercenary company, doesn’t have. Probably because he’s the sort to thumb out the eyes of anyone who gives him the slightest bit of lip (his combat class is “Berserker,” after all). His company is charged with hauling a mysterious cargo for a witch (nothing bad could happen there, right?) and they soon split from the main party, with chapters alternating between the two caravans. Half the game is viewed through his cynical, hateful eyes, and as the journey wears on and takes its toll on the big man, we see that even the toughest and meanest sonofabitch out there is no match for the unrelenting misery life has become in this dying world.

The two-protagonist approach doesn’t just help dice up the narrative, it also helps to add some variety to the combat. While the main caravan’s roster mostly features returning favorites from the first game that players will likely stick with out of familiarity and effectiveness, Bolverk’s company features a band of new oddballs and unique specialists. I became particularly fond of Oli, a drunken axe-thrower (a lifestyle exactly as dangerous as it sounds) and Folka, a shieldmaiden who can break through enemy ranks by sacrificing her high armor rating with a shield-shattering charge. 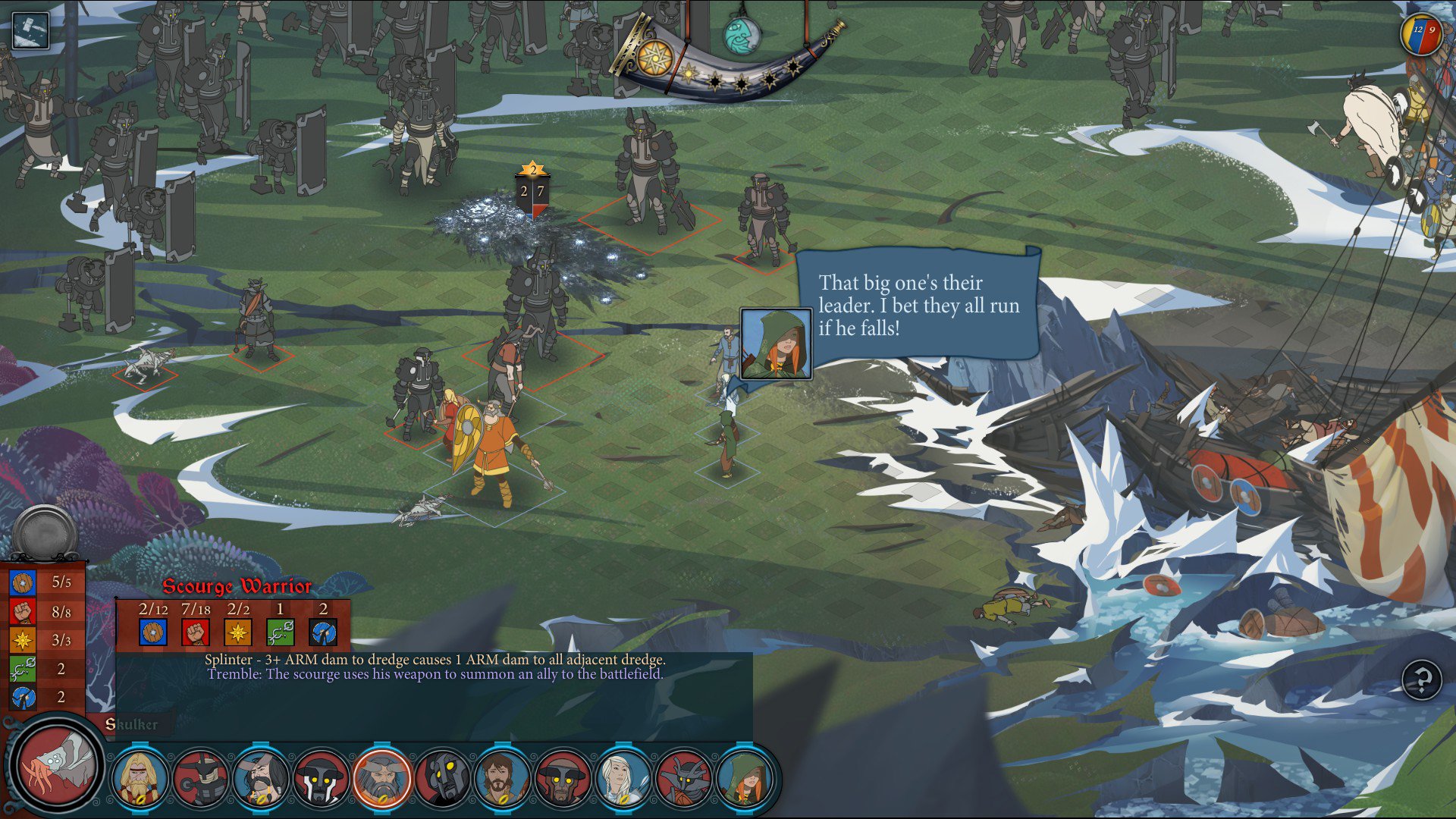 Combat as a whole is much improved in Banner Saga 2, and much more difficult to boot. While still a turn-based, grid-layout affair, there is a greater emphasis on enemy variety and tactical choice, areas the original game struggled with past the halfway point. There are plenty of unique units with interesting rules and abilities to fight as and against, and while the standard tactic of whittling away armor before moving in the big guns hasn’t changed that much, there are enough sneaky tricks worth trying to keep things from getting stale.

In fact, I think there may be too many. I was still adding unique units with entirely different abilities to my armies well into the last third of the game, which would be great if I felt like I had a solid grasp on them. Unfortunately, the pace is almost too fast to keep up with, and with the degree of difficulty in each battle, I was more prone to stick with characters I knew and understood than risk taking in a new type of skirmisher or a Mender (Banner Saga’s mage class) with entirely different mechanics than the ones I’d used before. Unless you are comfortable with spending a lot of time in the training tent and sparring mode, you’ll probably be liable to lapse into complacency even with all the options available.

The new enemy types are no joke. From wolf-monsters who can turn invisible and reposition around the field, to mage types that can reanimate your own fallen comrades to use against you, to ones that can strip armor from you every time you attack them, there is no end of hardships on the battlefield. Fortunately, the quasi-permadeath stakes of the original are gone and defeated combatants will only require some bed rest after falling. Good thing, too. Most of my fights ended with me littering the field with two or three dead soldiers on average, as well as limping through one or two squeakers with only a last man standing. 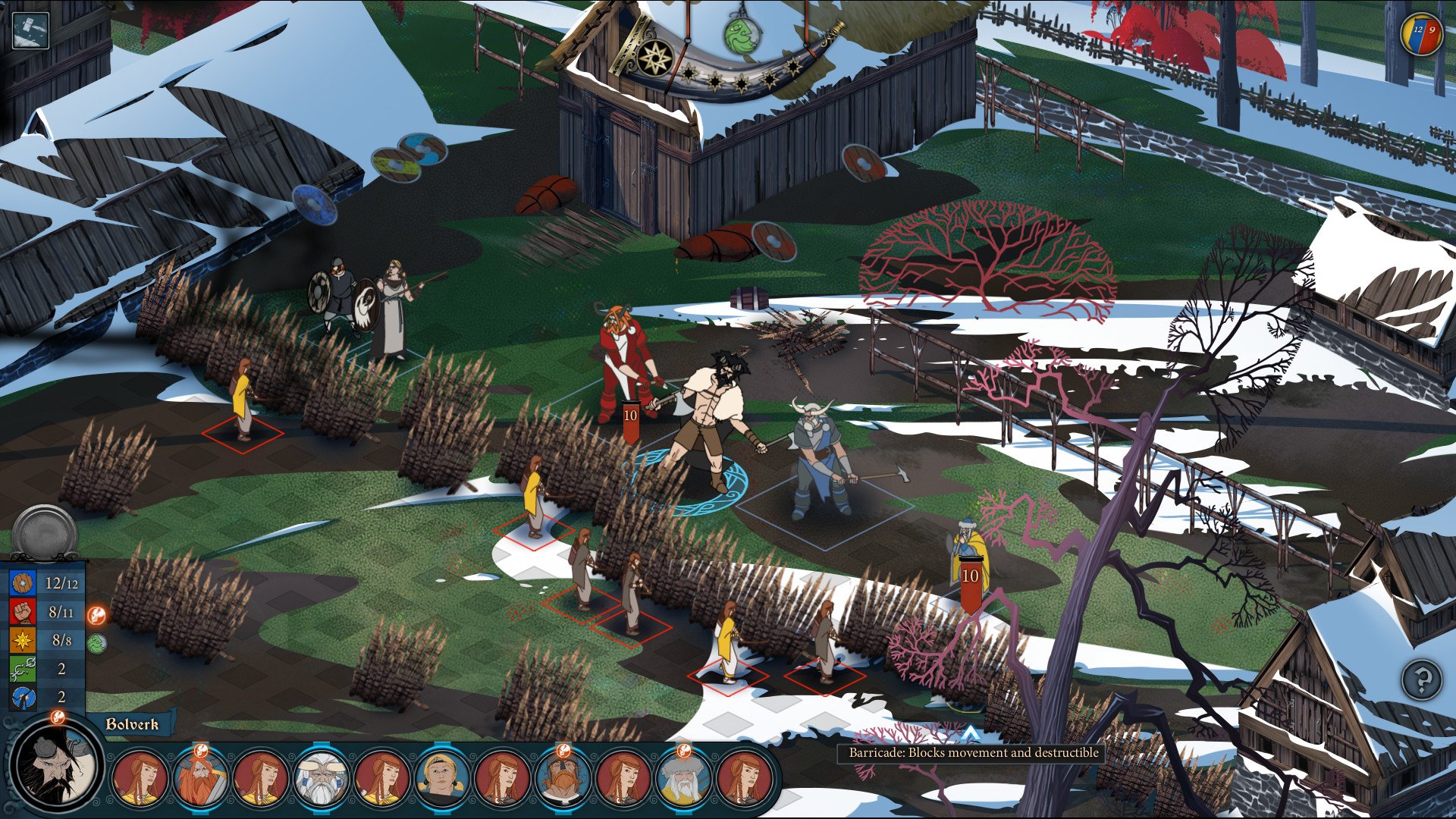 Despite the improved combat, to me, the star of the game is still the rich, weird, beautifully desperate world Stoic has created. The tragic nobility of the Varls, a dying race of giants without the ability to procreate. The terse power dynamics of one clan sewing their banner into another, forever dissolving themselves as an independent people in exchange for whatever safety can still be found in numbers. An item description of a small braid made from the mane of the last horse that ever lived – a piece of jewelry that still holds some of their fabled majesty and grace.

Too often RPGs and turn-based tactical battle games are the domain of knock off Middle-earths. Of poor fantasy pastiches stitched together with wizards sporting wispy gray beards, dwarves slurring cheap Scottish accents, and knights brandishing impractical shoulder pads. It is a joy and a treat to spend time with a world so different, so unique and intriguing. Even if it is a dying and depressing one.