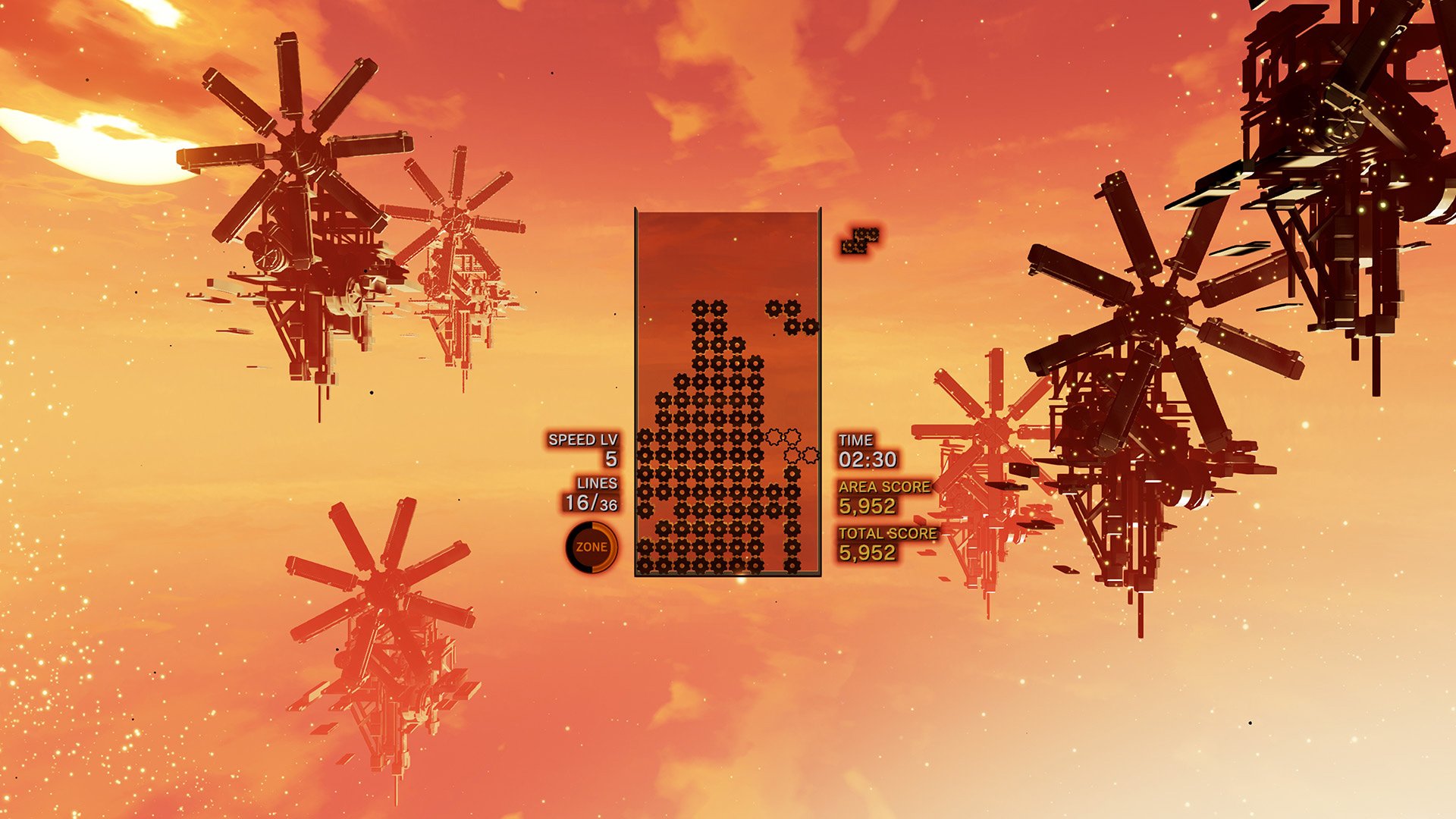 So much more than falling blocks

How do you modernize an icon like Tetris? Simple: You leave the mechanics alone!

Tetris Effect is the same perfect puzzling we know and love, but so much care has gone into enhancing every other facet of the experience. It’s Tetris by way of the folks responsible for games like Lumines and Rez Infinite. In short, it’s beautiful. Every single level has its own finely-tuned visual theme, sound effects, and music, and all of those elements exist solely to put you in your own little zen world.

I knew Tetris Effect would be good, but I vastly underestimated just how engrossing it could be.

I’ve always liked Tetris and its various offshoots, but I have never been anywhere near this obsessed with improving my scores. Part of that stems from the grading system, which feels tough but fair to an average-at-best player like me. Earn a C in one of the many side modes, and you won’t want to rest until you’ve bumped that grade up to a B (then an A, and an S, and so on). Even if you come up short, you’re still earning experience points for your profile every step of the way. While I fully recognize that it’s a meaningless number attached to an avatar, damn does it feel good to see that XP bar fill up.

That positive reinforcement will keep you motivated, but the real draw is the satisfaction of stitching together falling puzzle pieces into a cohesive whole. Despite its lavish visuals, this is still a traditional Tetris game through and through. That said, Tetris Effect does have one trick up its sleeve: a new time-stopping Zone ability that can get you out of a jam or help you maximize your high-score potential. You can’t spam it, and it’s by no means a get-out-of-jail-free card. The Zone feels like a natural extension of Tetris. To make the most of it, you’ll need to think multiple steps ahead and be ready to improvise.

The mechanic is also thematically appropriate. Tetris Effect is immersive in every sense of the word. The two dozen or so main story levels have themes ranging from tropical to urban to cosmic, and they aren’t just pretty backgrounds. Every stage has custom visuals and sound effects for the puzzle pieces. As you clear lines, the scenery evolves. The music grows more complex. Your every input affects the audio and the visuals, almost as if you’re creating a song through the simple act of playing Tetris. I can’t undersell how satisfying this feels. It’s electric. Tetsuya Mizuguchi fans will know precisely what I mean.

It goes without saying, but yes, this is all heightened in virtual reality. Tetris Effect is a must-have for PlayStation VR owners. You do lose some crispness compared to playing on a TV, but the way the world wraps around you in VR and further draws you into the experience more than makes up for it.

Don’t feel like you have to own a headset to get the most out of the game, though. It’s well worth the $40 asking price even if you only intend to play on a normal screen. Aside from the aforementioned Journey mode, which is compelling enough to warrant revisiting multiple times over, there are numerous Effect modes. I’ve split my twenty hours of playtime evenly between the two offerings.

Effect modes include familiar reflex testers like Sprint (clear 40 lines), Marathon (clear 150 lines), and Ultra (a three-minute time trial). I’m under their constant spell. There are also mind-teasing modes centered around earning All Clears, amassing combos, and wiping individual blocks off the stage. Mystery mode will flip your screen upside down, hand out duplicate blocks, and generally do its best to mess with you. It’s a real winner. Several of the Effect modes tread the exact same ground as the story levels, albeit with more of a relaxed approach; apart from them, everything has long-term appeal.

The final piece of the puzzle is the Weekend Ritual, a recurring 24-hour goal for the community to strive toward. If players collectively earn enough points in the designated modes each weekend, they’ll unlock special avatars. You can see other players’ avatars floating around a globe (I’m rocking a UFO!), and while it sounds cheesy, this helps instill a sense of togetherness. Tetris shouldn’t be lonely.

Some people will be disappointed by the lack of competitive modes, and that’s fair enough, but don’t let their omission bring you down too much. Tetris Effect isn’t intended to be a heated head-to-head sort of game. It’s more sentimental. Whether you’ve loved Tetris since the ’80s or you’ve never quite meshed with its status as an all-time classic, you should be able to find something to latch onto here. Seasoned players can tweak the settings just the way they like and tone down the visuals. Newcomers can crank up the extravagant effects and relish the whimsical atmosphere. Everyone wins.