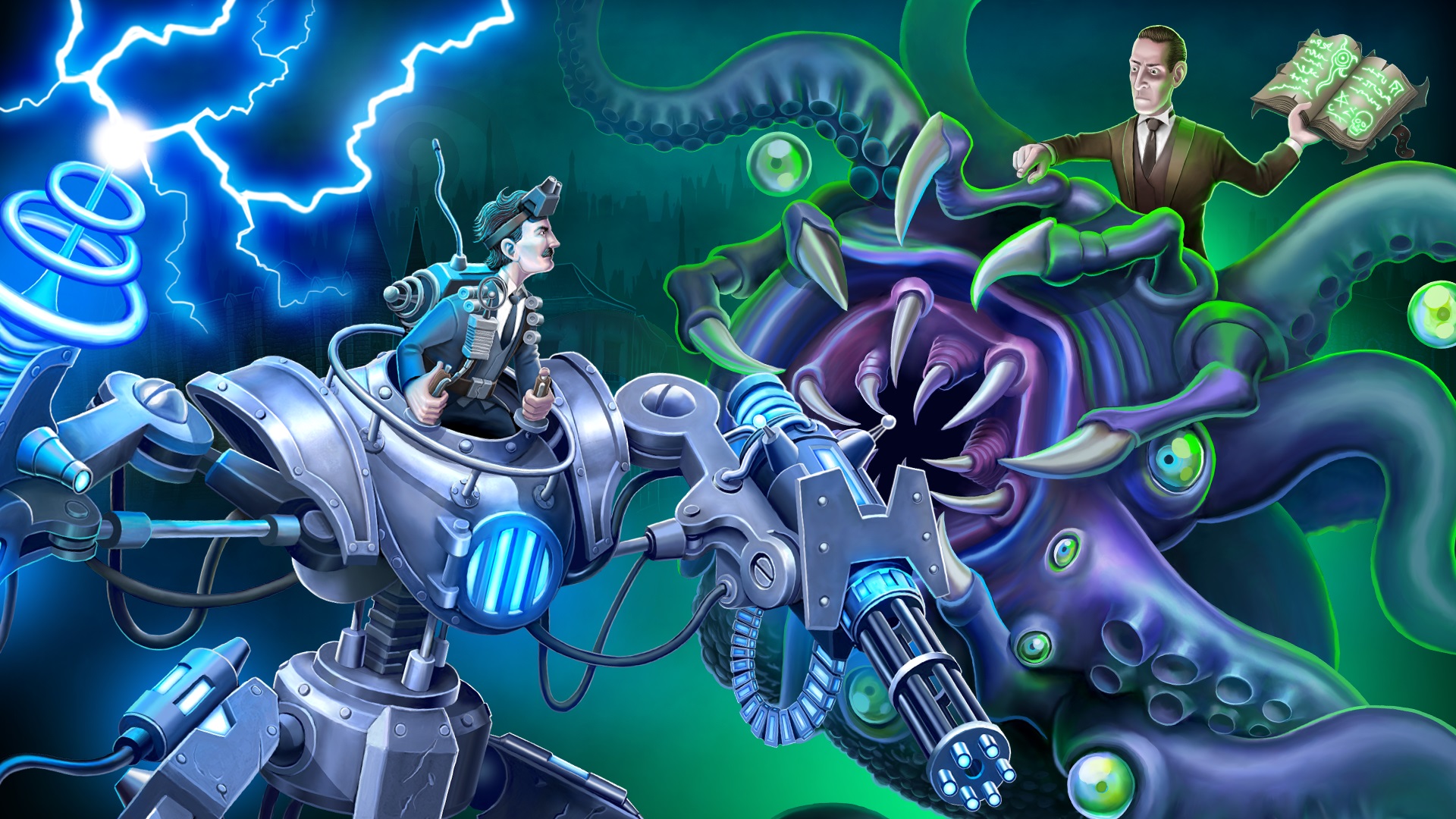 Crimsonland has found a proper successor

The creators of the insanely awesome twin-stick shooter Crimsonland are back with a new title with an undeniably weird concept.

You play as inventor Nikola Tesla whose experiments have somehow evoked the wrath of a few Lovecraftian horrors. Tesla comes equipped with a static powered mech, a slew of other inventions and an entire arsenal of guns. which you can use to put down the hordes of Shoggoth and pals. 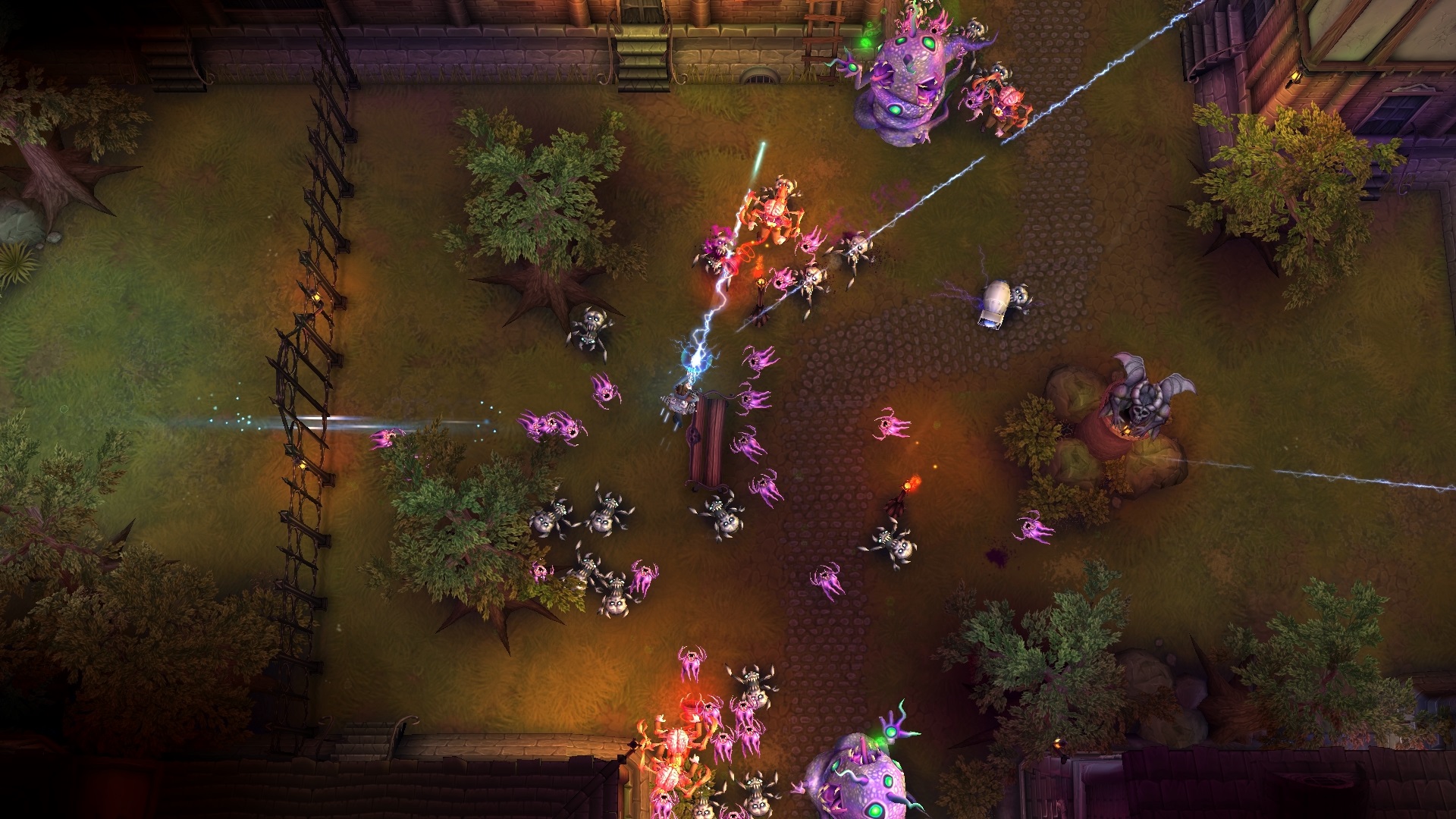 The story opens with Tesla showing off his latest tech when an enraged H.P. Lovecraft storms the stage. H.P. warns Tesla that he’s meddling with things he couldn’t possibly understand, before being hauled off to a cell by authorities. Cut to Lovecraft then invoking Cthulu, of all things, to put a stop to Tesla’s static machines. There really isn’t too much of a plot. The appeal is all in the game’s weird premise, and blowing away hordes of otherworldly monsters as a gun-toting Nikola Tesla is pretty damn cool.

At its base, Tesla vs Lovecraft is a run-of-the-mill twin-stick shooter, but much like its predecessor Crimsonland, it’s all of the upgrades that you amass during gameplay that keep things interesting. Tesla starts each encounter in a giant, static-powered mech. In this pinnacle piece of engineering, you’ll tear through the hordes of Lovecraftian monsters at an alarming rate, but it won’t last long.

Eventually, said mech will explode and you’ll be reduced to an unarmored, pistol-wielding Tesla. Should you lose your transport, you’ll need to collect its parts from around the map if you want to temporarily power up again. Tesla can teleport to quickly escape enemies, but this ability comes with a cooldown. As you mow down enemies you’ll gain levels, and with each level you’ll be prompted with a choice of upgrades. everything from bullet ricochets, damage increases and poison ammo can change how you tackle each mission.

If you want to pack a bigger punch, there will be plenty of item drops on the map as you progress. You can replace your pistol with everything from a repeater shotgun to a gauss assault rifle. Health packets and secondary abilities, like static clouds and electric pylons, can be grabbed also.

There are a series of permanent upgrades available, like increases to the mech’s armor, that require Aether crystals, found in story missions. As a heads up you won’t really start picking up these crystals until you’ve played through the story on its base difficulty. 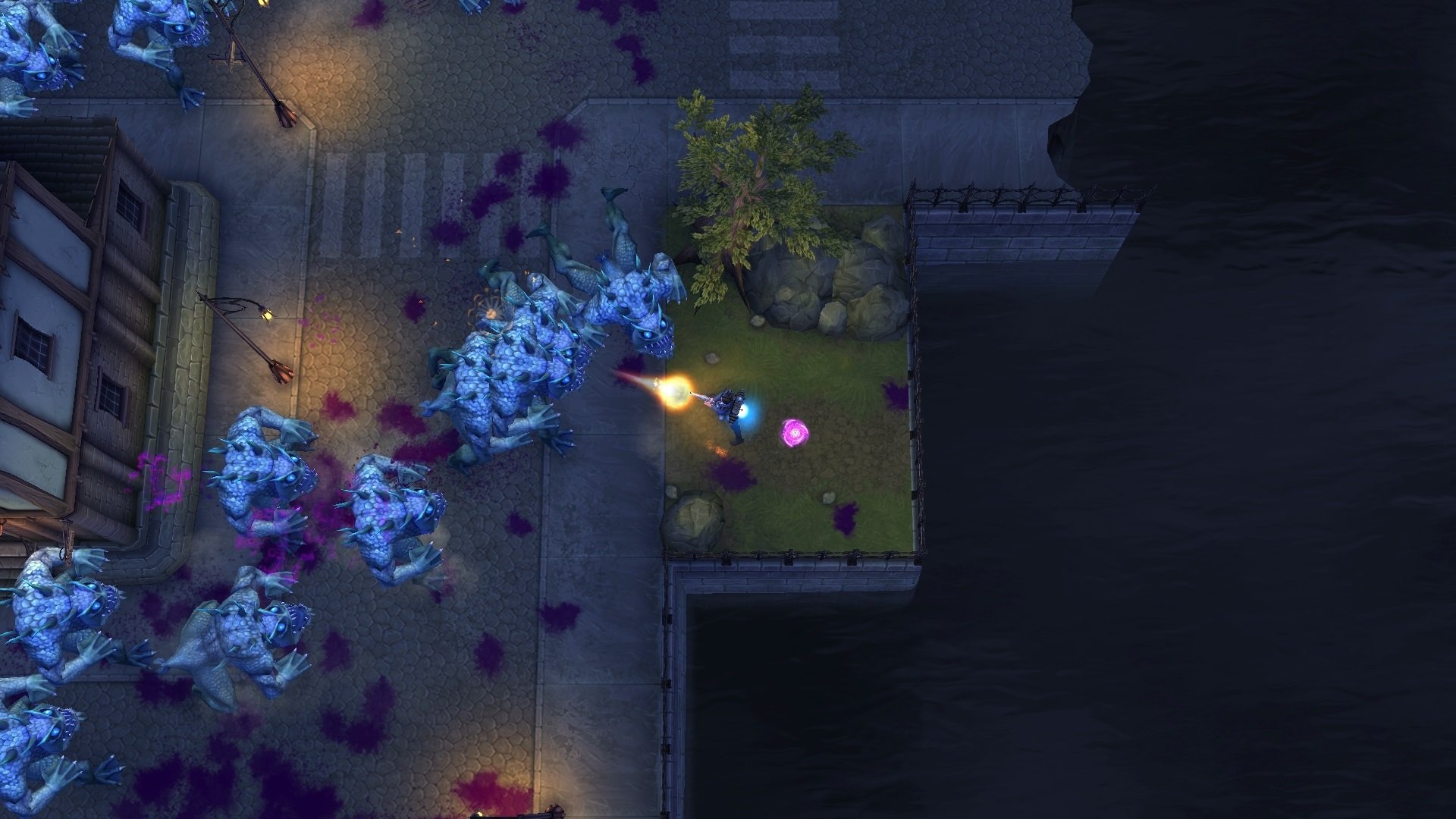 The story itself is relatively short. You can blow through all of it in about two hours. There are three difficulty modes split into the Normal, Aether, and Eldritch planes. You’ll only have access to the normal plane at the outset and you’ll have to beat each mode to unlock the subsequent difficulty.

Of course, Tesla vs Lovecraft also comes equipped with an endless mode. Once you’ve really got a handle on things it’s a huge amount of fun to watch the screen populate with huge waves of monsters. I’d recommend bumping up the monster count to the maximum in the options. The default enemy count ss at around 150, but you can bump it all the way up to 600!

Tesla vs Lovecraft doesn’t reinvent the twin-stick shooter genre, but it’s a hell of a lot of fun and has its own weird and distinct style. I only wish there were a bit more substance to the cutscenes and a few more story missions packed in for good measure. But if you like fighting off large waves of monsters, you’ll get a lot of fun out of its endless mode.