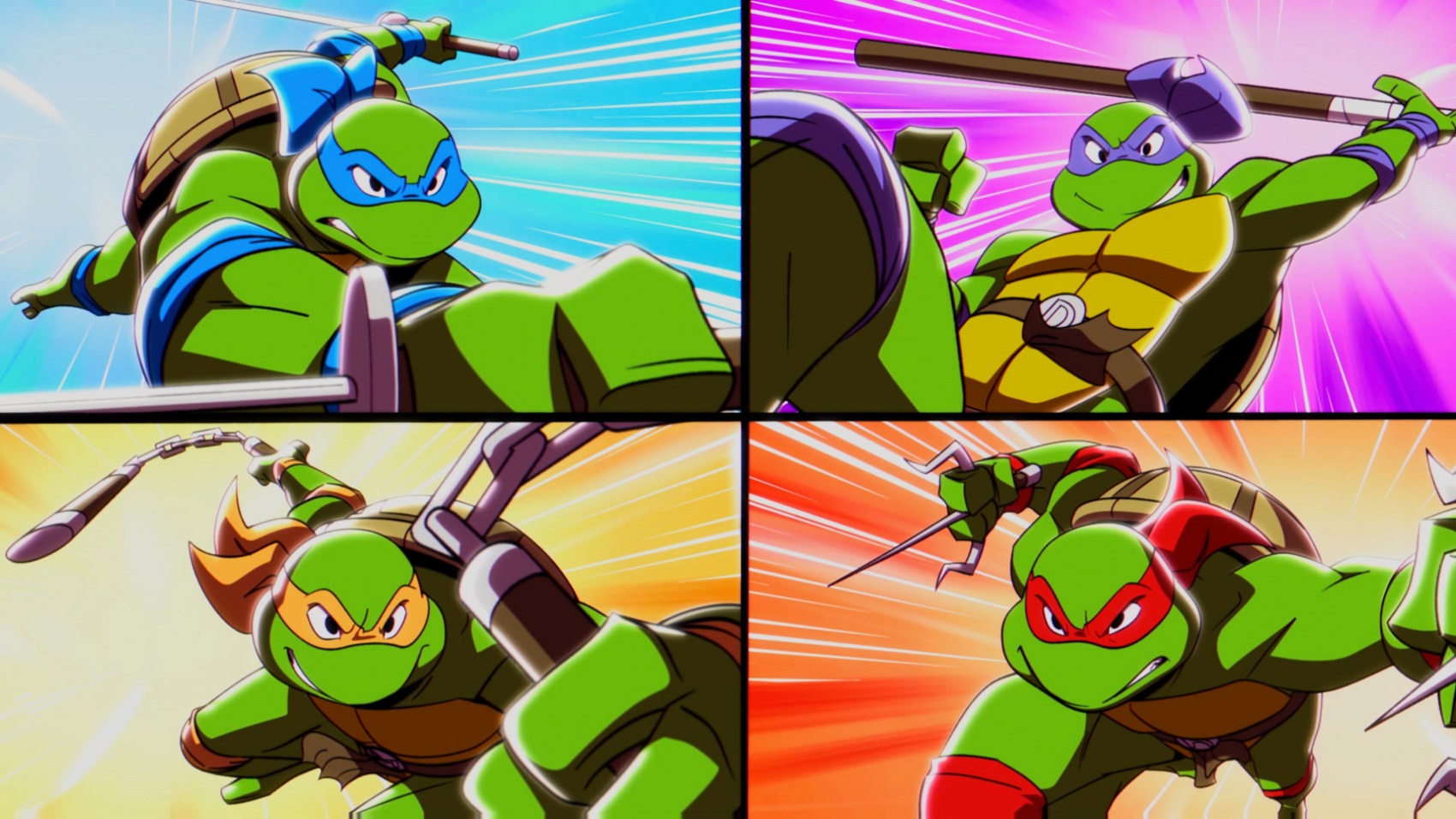 When I look at all the games in The Cowabunga Collection, memories fire off like pistons in my brain. I recall the extreme joy of playing Turtles in Time. And the extreme sadness of the frustrating and infamous Turtles NES platformer. Plus everything in-between, like showing people the SNES version of Tournament Fighters in a bid to woo them over while they were busy playing other fighting games.

Individually, not all of these titles stand out. But as a repackaging, Digital Eclipse has done some fine work. 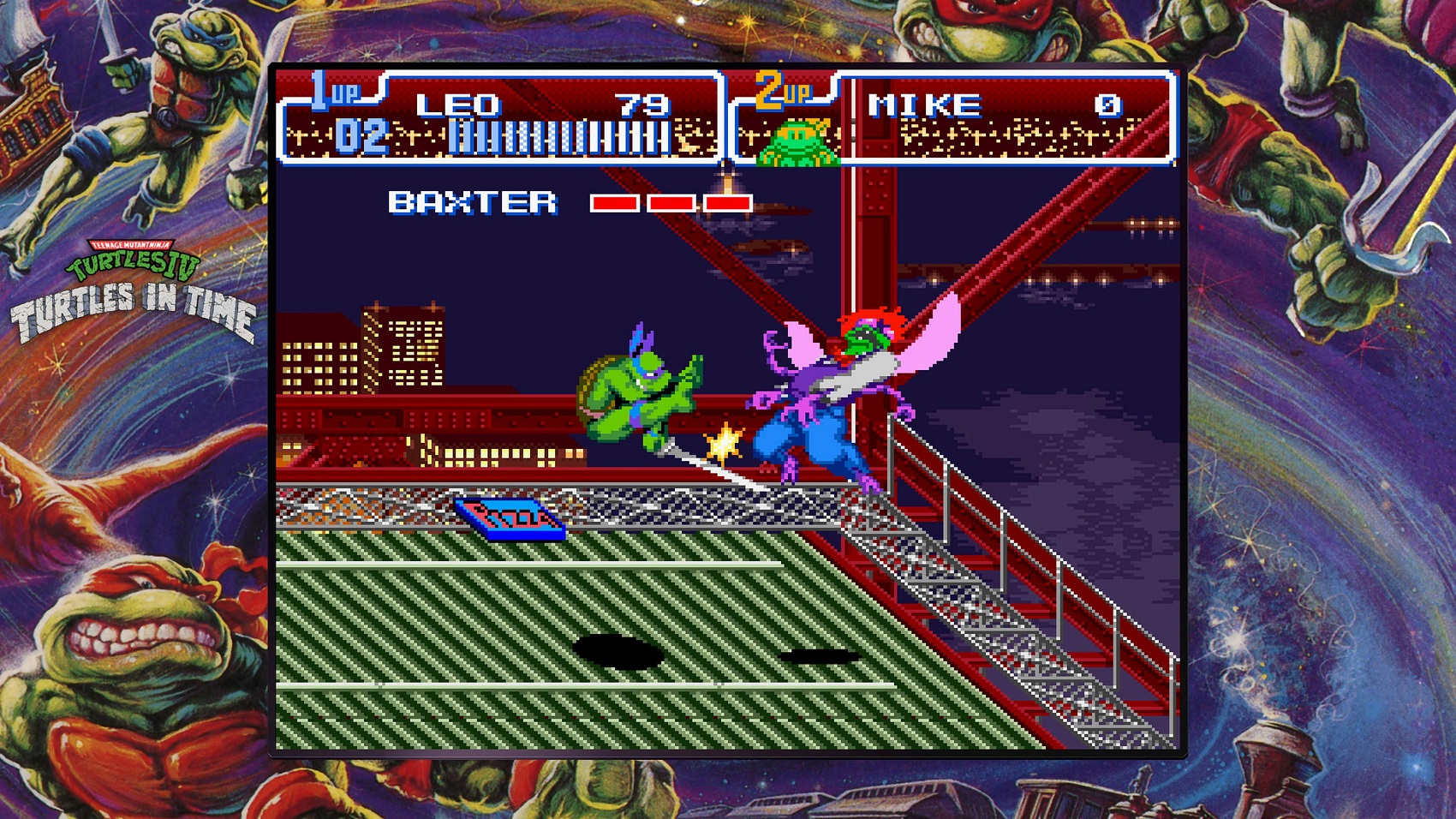 As we do with many reviews dealing with compilations, let’s take a look at what’s on offer upfront before we dig in:

As I said before, quite the selection! There’s so much to unpack there, and we’ll start with the obvious: the games themselves.

Turtles in Time is an absolute classic, and could very well be considered the crown jewel of the collection. In 2009, people were paying $10 for it on the Xbox Live Arcade and PSN, or still playing the SNES original. Its time-bending setting, ahead-of-its-time voicework, and varied level design helped catapult it to one-of-the-greatest-of-all-time genre status. I had a blast playing through it again in both SNES and Arcade form (which mostly have aesthetic differences, with the SNES version sporting a bit more content and alterations), and it was a great way to kick off a playthrough of the collection.

Odds are though you’ll have a few that you consider your personal favorites. Hyperstone Heist often comes up in a lot of Turtle game conversations, and it does hold up today. Outside of Turtles in Time, I played a lot of Tournament Fighters SNES, and even though it could be considered a wonky fighter overall, I appreciate the arcade and versus mode options, as well as the addition of a few out-there characters. The brawlers/beat ’em ups in the pack, really, are evergreen, and somewhat legitimize this entire collection in the eyes of many. Some of them have been released in various fashions over the years, but now you can pretty much gather all of them under one $40 roof.

While I wouldn’t necessarily call them “underrated,” all three Game Boy games feel like natural evolutions of the formula set forth in the NES platformer; with simpler, more forgiving level layouts and more direct control of the turtles themselves. That’s especially true for the third entry, which has abilities specific to each turtle. Speaking of, Teenage Mutant Ninja Turtles III: Radical Rescue is definitely the standout, as it uses a Metroid-like framework. It’s actually one of the meatier games in the collection, and will likely surprise some people with how much there is to it.

As a whole, there’s something about the standout Turtles visuals that still hold up, even if the aesthetics for some of the NES and Game Boy titles have aged less gracefully. The distinct cartoony nature of the source material shines through here, and there’s a reason why individual Turtles beat ’em ups are considered part of the golden age of the era, alongside classics like The Simpsons Arcade Game. 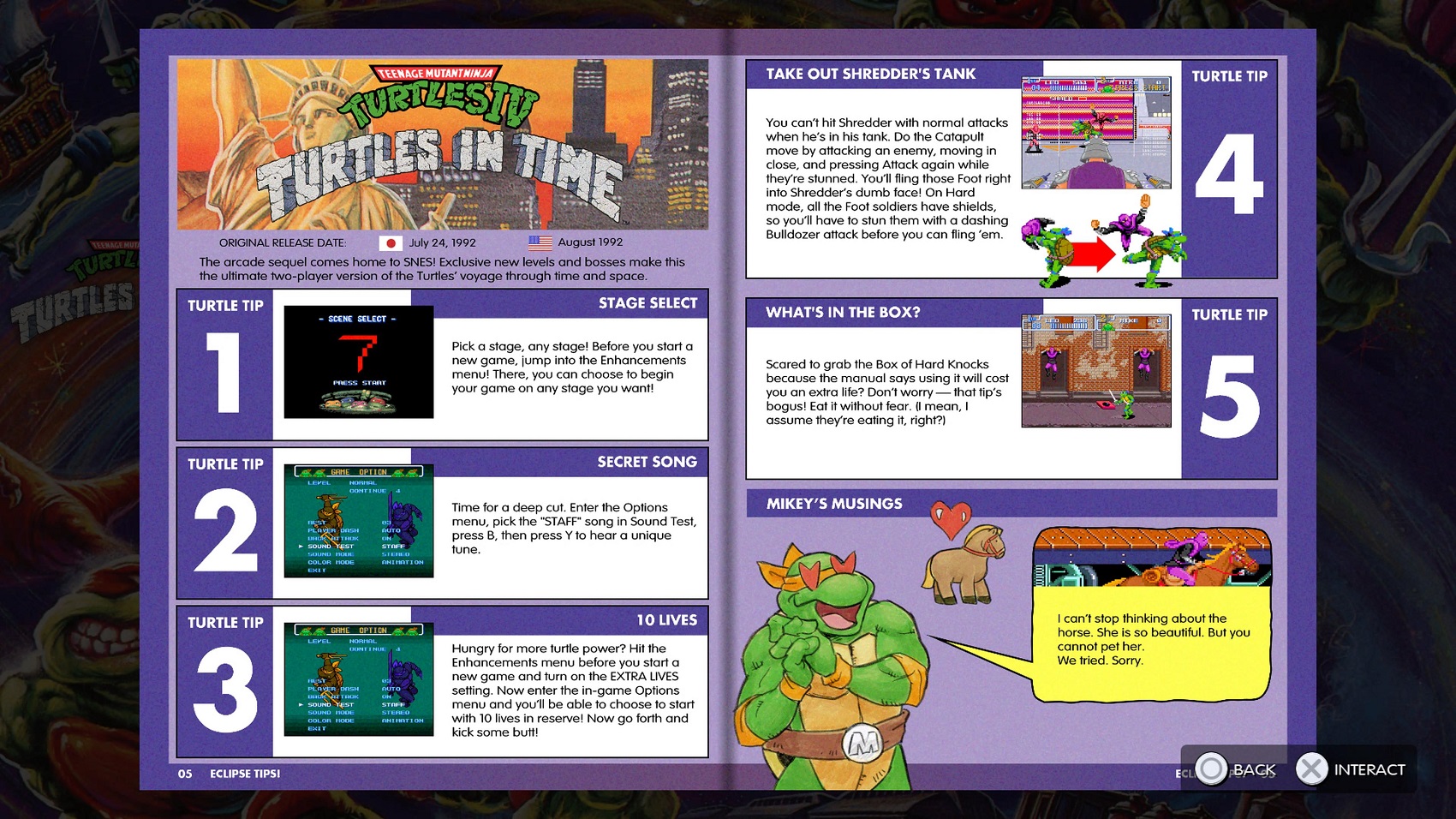 Naturally, mathing out how much each entry is worth to you can be tough. Yet, you really don’t need to suffer in silence when it comes to discerning whether or not it’s worth buying in, even if you only really like a few games. There are a lot of playthroughs of every single one of these games, and plenty of info out there. Once you’re past that stage, it’s time to look at the collection as a collection. We have great news on that front, as Digital Eclipse has done right by the Turtles legacy.

So one of the biggest features of the Cowabunga Collection is the “watch” mode. You can kick off every game with an automated assist mode, where it plays through a run from the start. Here, you can fast-forward and decide to jump in at any point. While you won’t necessarily need them for select breezier games, the most obvious choice for this feature is Turtles NES, especially for you folks who haven’t beaten it yet. It creates a level of accessibility that essentially justifies games that forever frustrated you growing up, even if it doesn’t fully salvage them. Games also have an “enhancements” [cheats] menu, including options like a level select and extra lives.

Strategy guides are also in, and they’re lovely. They’re crafted for The Cowabunga Collection, in the style of classic ’90s tips sections in magazines, and they’re super quirky, with some actually useful info to boot. What blew me away though is the ability to sometimes manually click on a strategy guide section and instantly turn on whatever feature it’s suggesting. This includes the chance to see “secret endings” and the like without having to actually play through it yourself. 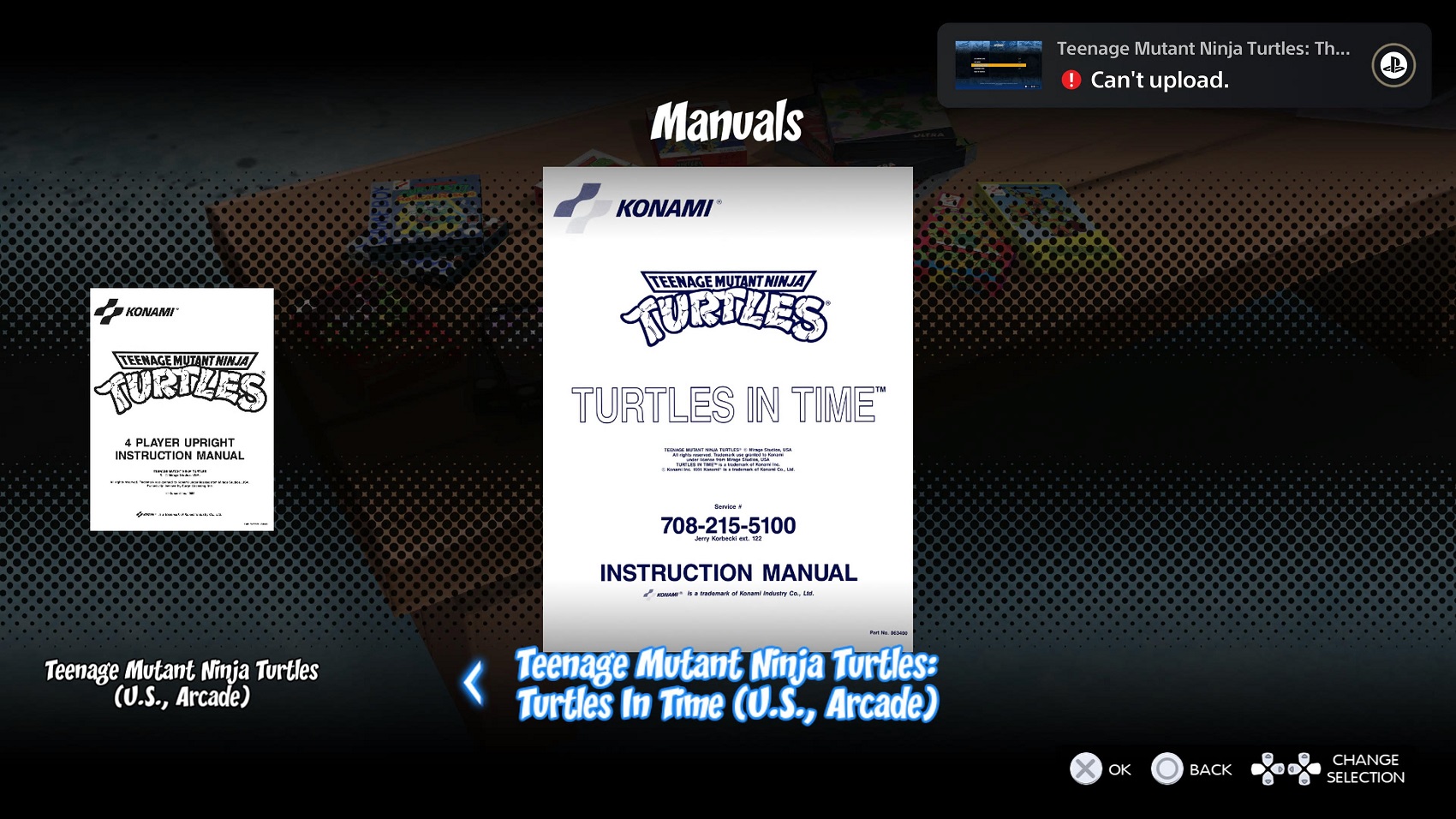 The standout feature for me is the extras menu. Here you’ll find boxes and manuals, ads and catalogs, and even comic book covers and still screens from several TV shows. There’s behind-the-scenes-style guides/bibles the designers had to follow for characters, and a music player. It’s a comprehensive look at Turtles history, and I surprisingly found myself digging into it for an hour before actually playing any games. Filters include original, full screen, widescreen, TV, monitor, and LCG toggles. Local play is in, and each game shows the number of supported players plainly on-screen. Although we couldn’t test online play, The Cowabunga Collection has the option for it.

Teenage Mutant Ninja Turtles: The Cowabunga Collection is a great repackaging of a set of uneven classic games. I’m in no rush to play Turtles NES again, for instance, but I can see myself diving into the extras menu and breaking out any number of the beat ’em ups with friends and family at pretty much any point. With the amount of care put in by Digital Eclipse, this is one of the best ways these games have been presented since they were released.