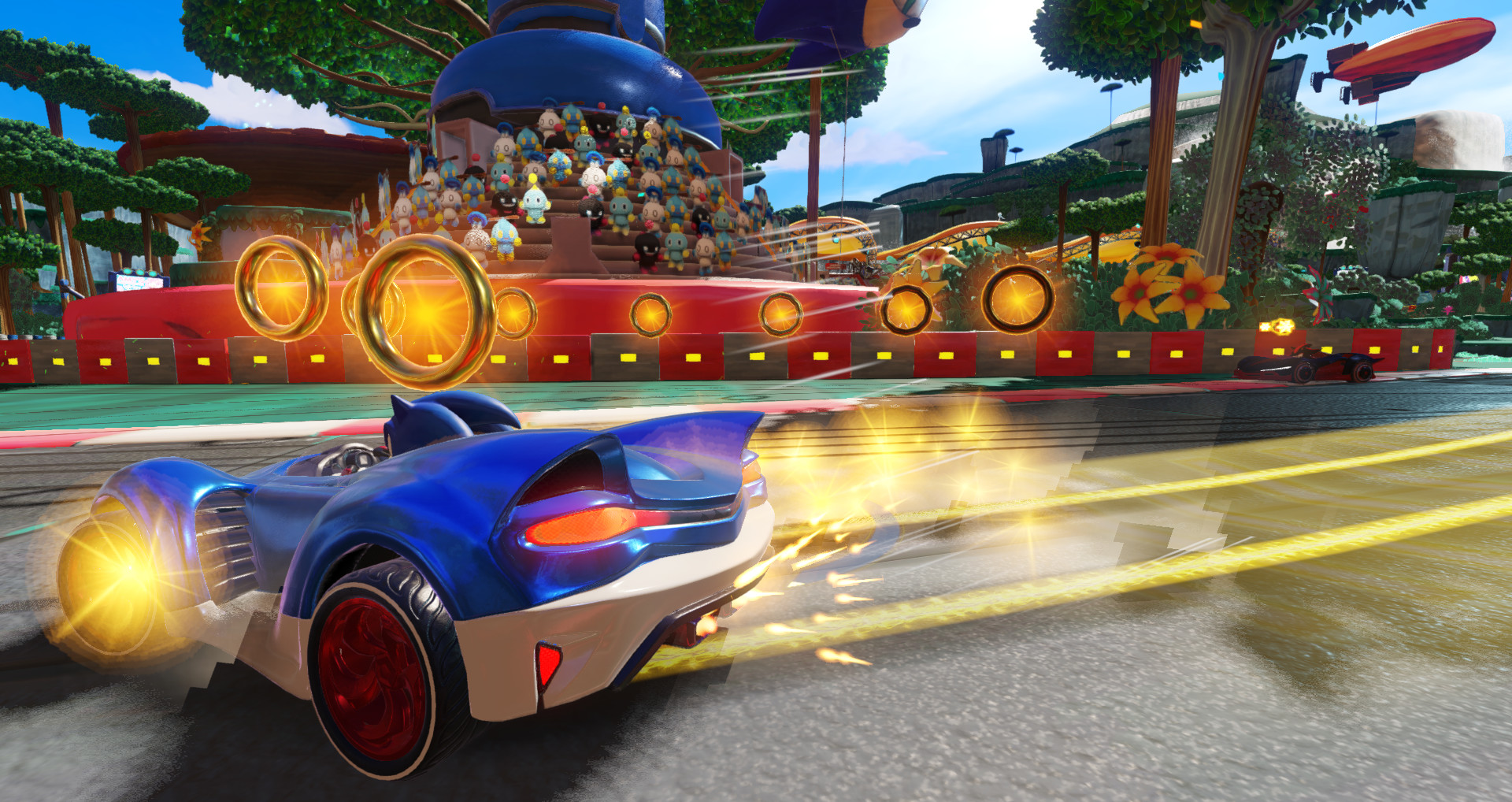 Sonic & All-Stars Racing Transformed is one of the best racing games of all time: in fact, it might be the best. That’s not hyperbole, as you only need to race one lap on the exploding, multi-layered Skies of Arcadia track to feel it. The controls are sleek, the roster rocks, and it serves as a greatest-hits tour of Sega’s storied, decades-long history.

As expected, Sonic and his pals can’t measure up to that same greatness alone with Team Sonic Racing, though Transformed left them a rock-hard foundation to work with. 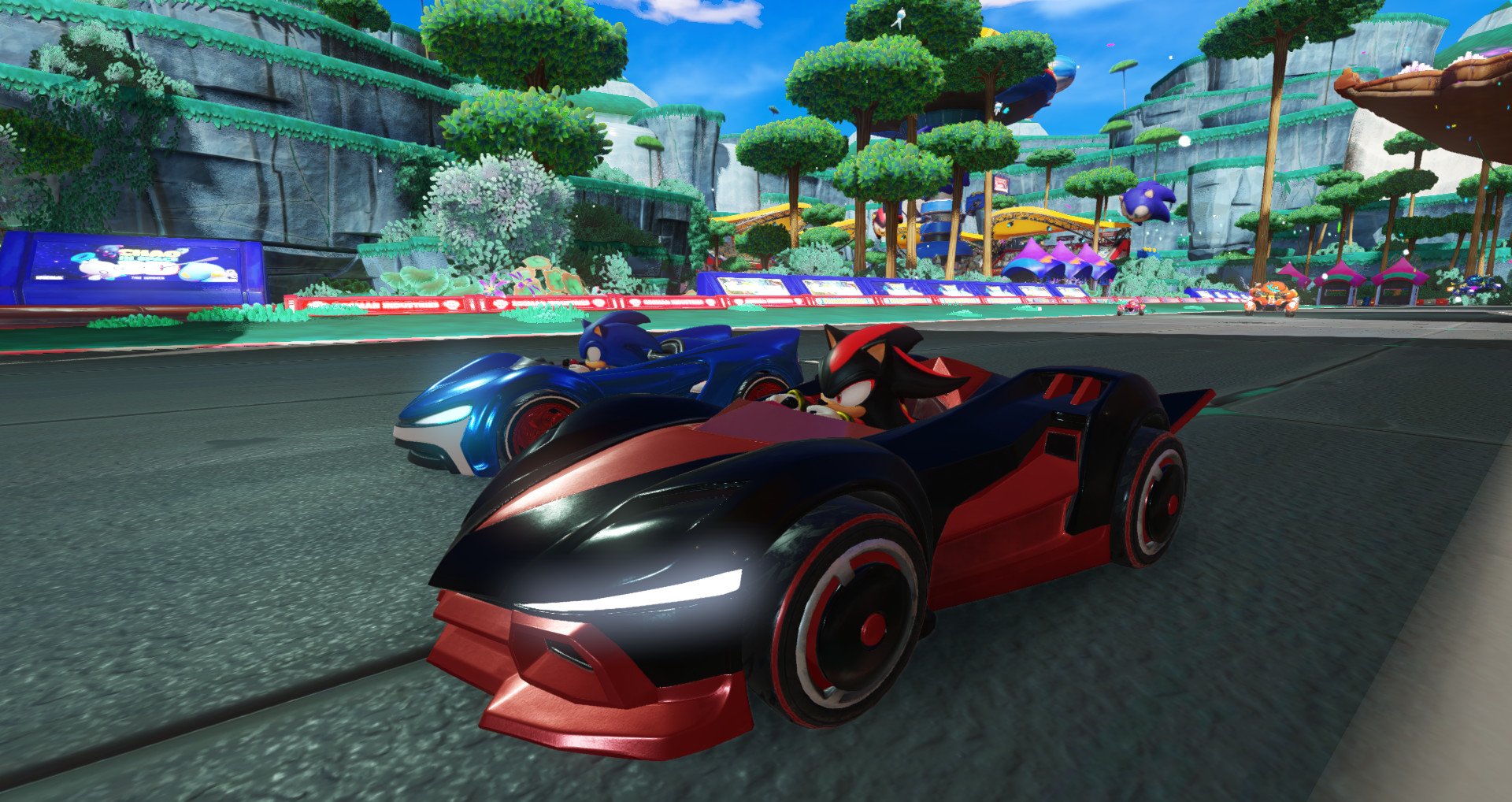 The gimmick here is in the title.

Team Sonic Racing separates players into squads of three, capping out at four squads for 12 racers at a maximum. The idea is that you race as normal, scoring points for placing, but can get ahead by doing team-centric things, like sharing items with your partners. It totally fits the whole feel-good vibe of Sonic and works far better than you’d expect. But before I go any further, just in case you were going to stop reading here, know that a normal free-for-all race mode is fully on offer here, so you aren’t forced into the team shtick.

Okay, so teams. There are a few things afoot here so I’ll make it as digestible as possible. Standard races typically are comprised of three laps and the placement of each teammate matters in the final scoring system. Upon picking up an item box (of the typical missile, shield, and boost variety, with a few twists) you can choose to give it up to someone on your team, you can skim past a teammate to save them from spinning out, or slingshot ahead by driving in their wake (denoted by track lines) to gain a boost.

I actually love how it all comes together. Dumping useless items has always been a problem in kart racers, so if I’m in first, giving someone a projectile so they can shoot up ahead on my level is a great feeling. The same goes for providing a slingshot trail: I found myself consciously driving with more precision to ensure that my lines were easy to follow and my teammates could stay in them. Restricting characters based on team choice is my only real bummer, though it does make things easier to follow (enemy racers and your partners are also highlighted with an aura).

The “story mode,” and I emphasize the quotes here, will run you through all of this bit by bit. Actually, it’s more of a tutorial, with light bits of voiced banter (dual audio!) between rounds. You can tell Sega kind of just stuck this in for die-hard fans, as the chance to see characters from different iterations interact (like Silver and Shadow) is neat in theory, but the delivery feels very jilted, like each voice actor is reading their lines months apart from one another. In-race dialogue isn’t much better outside of the occasionally hilarious interaction (like fellow baddie E-123 Omega shouting “Shadow, why?!” after being pelted in free-for-all mode), though thankfully that can be turned off or forced into “text only” status. Big props to the playtester who probably asked for that option.

There’s a bit of depth buried in Team Sonic too, due to the manageable three-class system: speedsters are resilient to projectiles, technique-based racers can drive over grass or gravel at full speed, and power can smash through hazards without slowing down. Tracks typically have portions that play to the strength of each, which makes the whole team concept even more intriguing. It heightens the meaning behind who you pick as your avatar beyond typically intangible benefits between weight classes in kart racers. By the way, this is the roster. You can look at it, you complain about it, but don’t say I didn’t warn you.

That track list, mind, is one of the game’s weakest elements. There’s some bangers that deserve to be buried in the hallowed crypt of kart racers, like the Clockwork Pyramid, which offers a veritable buffet of neon aesthetics and dangerous hazards. Then there’s the Haunted Castle, which is one of the best uses of the spooky/castle track motif yet. All three casino levels are perfect, baseline “putting in work” courses. But several blend together and the last grand prix repeats courses. Mirror tracks soften the blow but a few levels had me scratching my head going “I swore I played this already.”

Team Sonic, in comparison to Sumo Digital’s effort with Transformed, feels safer. Since you aren’t flying or skimming over water in addition to racing karts, levels are more traditional in nature. That’s not inherently a bad thing, but I wish they pushed the envelope a bit more often as it becomes a problem when several of the game’s tracks blend together. That’s not to say Sumo Digital doesn’t get creative. 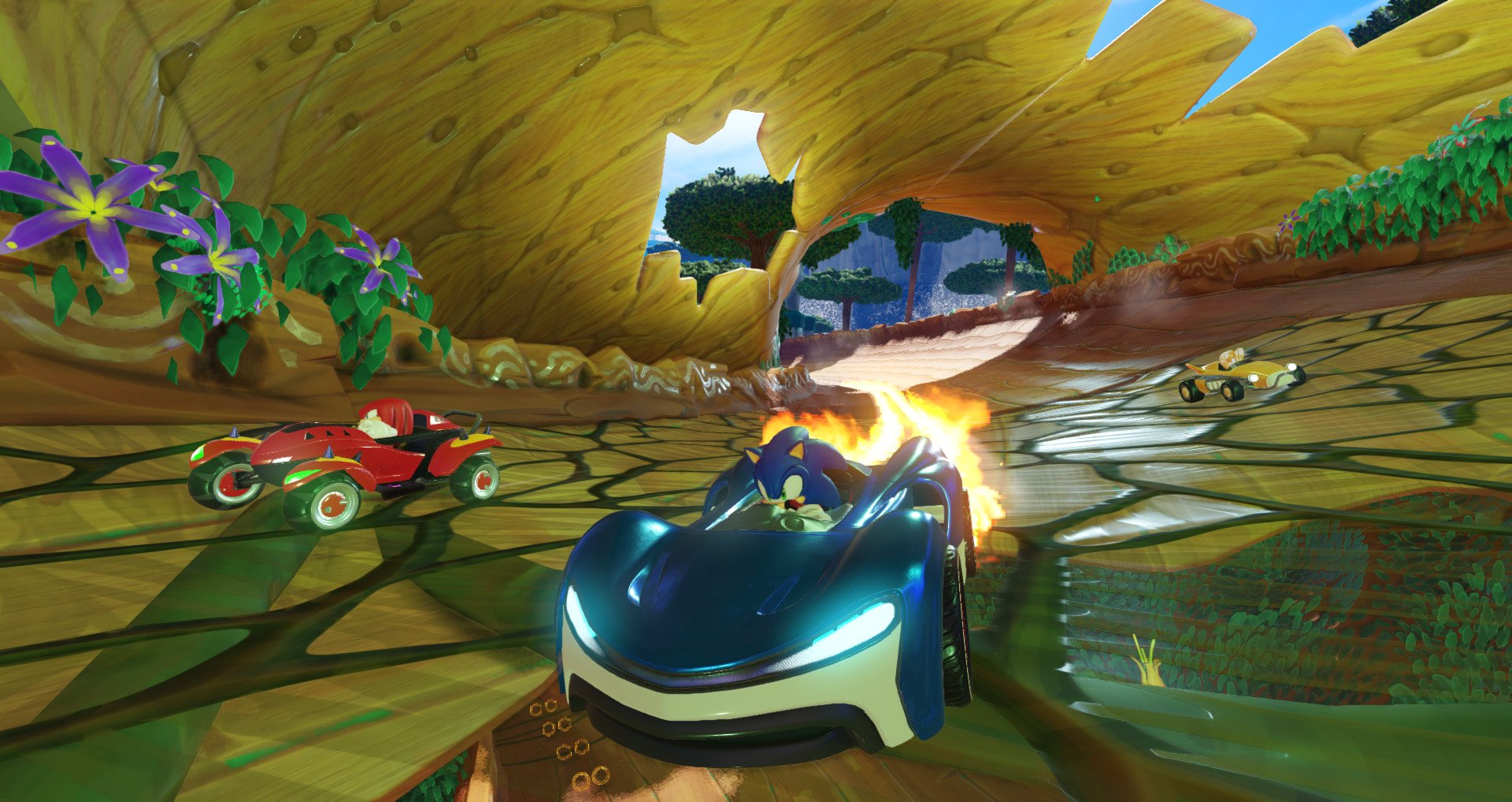 There’s a lot of granular Sonic references baked into each track, like the Mother Wisp Jellyfish from Sonic Colors that crafts aural tracks in the sky: the more esoteric and adventurous concepts like this evoke some of the best bits of Racing Transformed even if they’re few and far between. Team Sonic also has more out-there events like “kill a bunch of egg car NPC racers,” or king of the hill (stay in first to accrue points), or even survival (last place is eliminated each lap). It’s a decent compromise in lieu of a real battle mode.

I’m not jazzed about the currency system (which is all in-game as of now, knock on wood), which grants players random kart upgrades and cosmetics for individual characters, on top of one-time use “bonus box” powers. I wasn’t a huge fan of Mario Kart 8‘s equipment mechanics but this is far more annoying due to the randomness of it. The thing is, Team Sonic Racing has enough single-player and offline/online multiplayer options to keep people going for a while, so a grind like this wasn’t necessary. Plus parts have tradeoffs, so it’s not like getting shiny new rims for Shadow’s ride is an instant win-more upgrade.

In most circles, Team Sonic Racing probably won’t unseat Mario Kart 8 Deluxe (or Transformed‘s ever-enduring legacy if my house is any indication), and that’s fine with me. Plenty of folks will enjoy the Sonic focus and many of the tracks would have been fantastic as Transformed DLC. I just wish it wasn’t as limited in scope out of the gate.